Amazing Spider-Man: Renew Your Vows # 5
I'll Always Be There For You 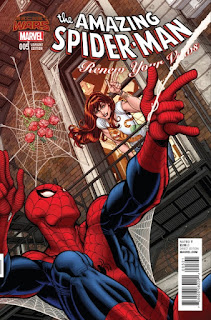 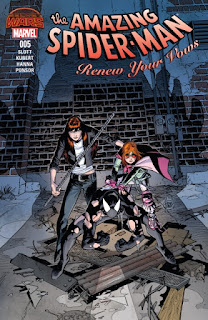 In this final issue, we see Hawkeye and his resistance confronting Regent after successfully teleporting through the hole that Sandman created for them. ( see Amazing Spider-Man: Renew Your Vows # 4)

Hawkeye attempts to fire his special arrow designed with Peter's tech from Annie's inhibitor chip. Regent however is able to catch the arrow before it hits him as he now possess spider-sense, which means that Spider-Man is now dead.

Over in Peter's subconscious, Peter relives all the happiest moments in his life as Peter and not his life fighting bad guys as Spider-Man. 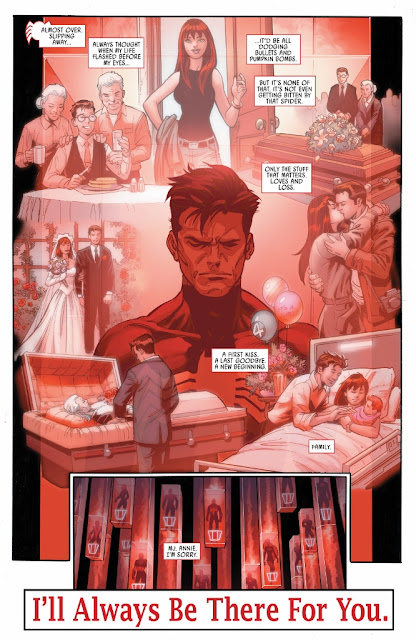 Elsewhere, not realizing that Peter is now as good as dead, MJ and Annie continue to find Peter. They bust the control room but are still unable to locate Peter. MJ then instructs Annie to destroy all the booths containing the dead heroes bodies which are supplying Regent with his powers while she suits up using a miniature suit power channeling suit formerly worn by one of the bad guys.

Sensing his powers being destroyed, Regent storms through the wall to face MJ and Annie. Annie's scream for help somehow knocks Peter back to life, causing him to regain his willpower and break through the glass containing him. 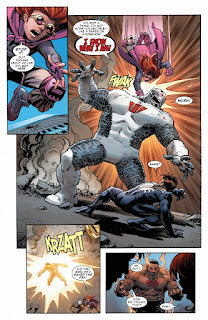 Peter then football tackles Regent out the window, down the tower and the two begin to fight head to head. In the meantime, MJ continues to destroy Regent's source of power to give Peter a fighting chance.

Annie jumps to her father's aid, and with the help of the arrowhead from Hawkeye's special arrow, she is able to relieve Regent of his super powers. Regent is eventually defeated by the Parkers who fight him together as a family. By the end of the battle, Peter renews his vow of being a hero.

In the final scene the Parkers are having breakfast, wondering what Regent was talking about when he said that he was empowering himself to defeat the god called Doom. (Secret Wars reference)

The whole series in general was a pretty enjoyable one. When readers first heard about a series called Renew Your Vows , most thought that it had something to do with the marital vows between Peter and Mary Jane. As it turns out however, Marvel very cleverly provided us with nothing but a tease as the story was really about Peter renewing his vow to be a hero once again.

It was neat to see this story come to a happy ending, considering the endless possibilities that could have happened to this non cannon version of Spider-Man. 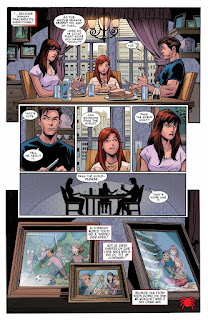 As mentioned in my previous reviews, it was a little silly that the solution to ending Regent's reign of tyranny lay all along in Peter's inhibitor chip which he had been using for years. Apart from that however, the story was fairly flawless.

Having the happy moments of Peter's life flash before his eyes before death instead of his life as Spider-Man fighting bad guys really highlighted the fact that Spider-Man is defined by Peter Parker and his family and friends, and not so much by his spider-powers. Though we all know this already, it was quite nice to see it again in this issue.

This will be the last review for Amazing Spider-Man volume 3, as from here on, we will be reviewing, the relaunch of the Marvel Universe, following the events Secret Wars, which regrettably was not reviewed on our site due to time constrictions.