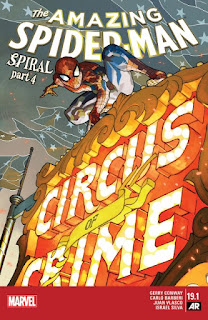 
This issue begins with flashbacks from Spider-Man's and Wraith's life. While we all know Spider-Man's story, here we find out that Captain Watanabe was born into a family of cops. Her father unfortunately, went corrupt and accepted a bribe during his career.

The scene then reverts to where we last left off in Amazing Spider-Man # 18.1, where Spider-Man rushes to Wraith after hearing a gunshot and finding her with a gun in her hand. Wraith explains that she did not fire the shot and that one of Mr Negative's inner demons did so to tarnish the scene and set her up. The guards soon arrive and Wraith throws her fear gas bombs at them, escaping with Spider-Man. 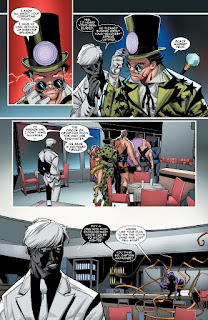 Over at Chinatown, Mr Negative has arranged a meeting with the Ringmaster, a criminal with mind controlling abilities stemming from eye contact. He also has a bunch of goons who follow him called the  Circus of Crime. Mr Negative proposes an alliance as they are the remaining two crime lords. His offer is rejected by the Ring Master however, knowing fully well that Negative has alternate motives to rule the criminal empire himself.

As soon as the Ring Master leaves, Wraith drops in the room attempting to get back at Mr Negative for setting her up. She is taken aback however when she learns that Mr Negative knows her secret identity as Captain Watanabe. Mid conversation, Mr Negative takes a low blow at Captain Watanabe, insulting her corrupt family history. Wraith attempts to attack but is held back by the Inner demons. Negative then explains to her that he means her no harm and only wants her to continue fighting crime as she has always been doing.

The next morning, Spider-Man is swinging around, looking for Wantanabe as he had been doing half the night before. He eventually finds her at her office, being fired from her job following Judge Howell's death in prison. 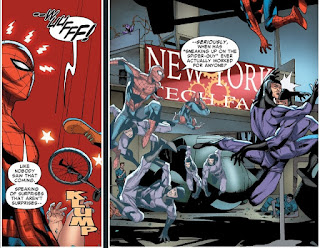 Later that night, Wraith and Spidey follow Negative's tip to where the Ringmaster would be that night.

To cut it short, Spider-Man takes out all the bad guys by himself as Wraith left the scene after spotting one of Negative's inner demons at the scene.

Wanting vengeance for how Mr Negative played her out, he decides to take her battle straight to Mr Negative.

Wraith going after Mr Negative is certainly not one of her smarter moves. We just saw a few panels ago that she was unable to hold her own against just a handful of Negative's inner demons. Seeing that her alter ego's life is now doomed however might be giving her extra motivation, or a lack of concern about what happens to her after she battles Mr Negative. 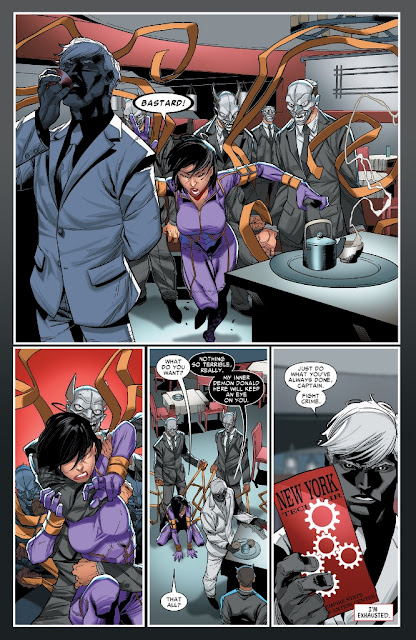 Spider-Man, as he has been in the last few issues, is just a side character who adds color to the issue. He is primarily concerned about Wraith's well being, both physically and mentally. Being the good american hero in red and blue, he tries to act as a guide for Wraith, hoping she will recover from her all time low.

The true genius in this whole story is really Mr Negative however, how has single handedly inherited the criminal empire without lifting a finger. Posing as the good informant, he managed to get Wraith's help to take out every one of his competitors, while holding an ace up his sleeve - the knowledge that Captain Watanabe is Wraith.

That Ace however is now not as useful as it used to be as Watanabe just got fired from her job, the one thing she had dedicated her life to.

The final scene shows Wraith off to get 'justice' for what Negative did to her. Ultimately, what we want to find out at the end of this story is if she will kill Mr Negative and completely lose grasp of who she once was, or if she will do the right thing and simply arrest him.

In a sense, what is happening to Wraith is quite similar to what happened to the Black Cat. Is there possibility that the two will join forces by the end of this story?