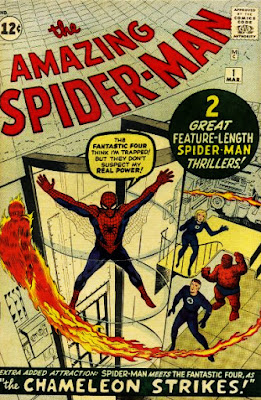 
Introduction:
In March of 1963 Marvel delivered on its promise to have Spider-Man inherit the Amazing Fantasy title. This wasn’t a continuation of that series though, rather an inheritance of its legacy as the Amazing moniker was bestowed upon Peter Parker and his alter ego, and thus The Amazing Spider-Man was born! Unusually though, Amazing Spider-Man began its life by printing two mini-epics a month as opposed to the standard one and done. So rather than one full length story of 21-25 pages, two 10-15 page stories are presented:


Plot:
‘SPIDER-MAN’
We begin by learning that things haven’t got much better for Peter Parker since his uncle’s death; rather they’re a good deal worse. Bills are stacking up, Peter is continuously ostracised in school and Spider-Man can’t earn a buck either. Aunt May is having to pawn off her jewellery to keep the Parker’s afloat and J. Jonah Jameson, Owner, Publisher and Editor-in-Chief of the Daily Bugle, is spearheading a media campaign against Spider-Man remarking: ‘The youth of this nation must learn to respect real heroes – men such as my son, John Jameson, the test pilot! Not selfish freaks such as Spider-Man – a masked menace who refuses to even let us know his true identity!’

This disguised piece of exposition sets the stage for the action of story number one: John Jameson is testing an experimental space craft and naturally things go wrong. A component breaks loose and unless it can be replaced, Jameson Junior will plummet to his doom. Enter Spider-Man! Realising he’s the only person capable of getting the part to Jameson’s craft in time, he interrupts an emergency meeting between the mission commander and Jonah, offering his services to act as a courier for the component. The cigar chomping, moustache sporting, flat-top wearing newspaper man is of course outraged, but the commander obliges. 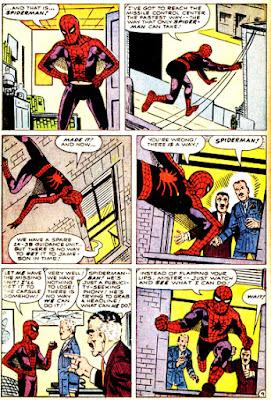 Spider-Man commandeers a plane, takes it to within jumping distance of the craft and attaches the missing component. John is saved! Satisfied with his work, Peter eagerly awaits to see the next Bugle headline. How will Jonah thank him for saving his son? ‘THIS NEWSPAPER DEMANDS THAT SPIDER-MAN BE ARRESTED AND PROSECUTED!’ begins the Bugle. Jonah Jameson suggests that Spider-Man must have sabotaged the test flight in a plea for positive publicity and even offers a reward for his capture (‘Report him to the nearest F.B.I. office’). The people of New York eat this up and Peter is left dumbfounded: in the public’s eyes, he’s a heel and a flat broke one at that. This leads us to…


'SPIDER-MAN vs. The Chameleon'
Peter figures the only way to make big bucks and pay the bills is to exploit his superhero shtick and gets a bright idea: he’ll join the Fantastic Four (FF)! ‘They’ll probably jump at the chance to have a teenager with super powers working with them! It’ll be a natural!’ With this ‘foolproof’ plan, he webs his way toward the Baxter Building, home of the FF, and breaks in. A defence mechanism triggers and traps Spider-Man. But it can only hold Spidey for so long when, using his super strength, he breaks free.

After a brief scuffle the Four explain they aren’t a business but a non-profit organisation. Spidey is furious and leaves in a hurry. Sue Storm remarks that they could’ve helped him had he simply stuck around while Reed Richards believes they’ll be hearing more from him in the future. Meanwhile, the Chameleon, a master of disguise and all around bad guy, is planning to steal secrets from the U.S. government in order to sell them on to the Soviet Union and/or Eastern Bloc countries. Taking note of Spider-Man’s unpopularity, he figures he’d make the perfect fall-guy for this latest job. In the guise of the wall-crawler, the Chameleon steals the secrets and escapes in a helicopter, all the while, luring the real deal to the scene. Spidey is forced to track down his new nemesis to clear his name.

Preventing the Chameleon from reaching a Soviet sub, he drags the costumed crook back to the long arm of the law. It looks like that’s all she wrote -- but wait! The Chameleon causes a temporary black-out, changes into his final disguise, a police officer, and attempts to escape. As Spider-Man is accused once more he leaps away to vanish and sulk in the night. The Chameleon is revealed in turn – his costume is torn, exposing his villainous identity. As the issue closes, the Fantastic Four ponder if Spider-Man could turn his back on law and order.

Review:
Let’s face it, neither of these stories are knockouts though they do carry importance in developing our narrative and introducing some key players and relationships. First off, the core theme linking these two stories is Peter/Spider-Man’s continued rejection from the super-hero norms. With Steve Ditko’s quirky art and Stan Lee’s fall from grace scripting, Peter Parker was noted for being different from just about any and all superheroes out there. He doesn’t have a fortune to fall back on like the Fantastic Four or a confidant like the Hulk had with Rick Jones.

He has enemies in the super-powered circle (the Chameleon being the first, as seen here) and in the everyday world via the highly opinionated J. Jonah Jameson. This creates a linkage between story one and story two and allows for a good flow; you can feel that these stories take place well within 24 hours or so of each other. You might even draw the same conclusion that John Byrne did in his much loathed Chapter One series and suggest that the orbiting craft John Jameson manned was sabotaged by the Chameleon.

Whatever the case, the world of Spider-Man is already being constructed masterfully by Lee with the inclusion of the FF setting up the development of the Marvel Universe with ties to the 1940s adventures of the Submariner already apparent courtesy of events in the foursome’s own adventures. Of course this creation of a tangible world has flaws, the biggest of which is of course its utterly dated nature. We noted last time that this comes with the territory of comic books, but it is particularly potent in early Marvel Universe tales, including here.

Stan refers to the Chameleon as a ‘commie’ and mentions the ‘space race’ in relation to John Jameson’s one man craft. The repeated mentions of these terms can become deeply grating to a modern day viewer and makes painful reading in early Hulk stories particularly and it is no surprise that the Hulk’s first major recurring super-villain foe is in fact the Chameleon (though these early stories actually suffer from a holding pattern more than anything else). Mercifully, Spider-Man has to deal with these references less and less as the character is relocated within the universe as the first truly street level hero, taking out mob bosses, crooks, robbers and the like. That would begin next issue. 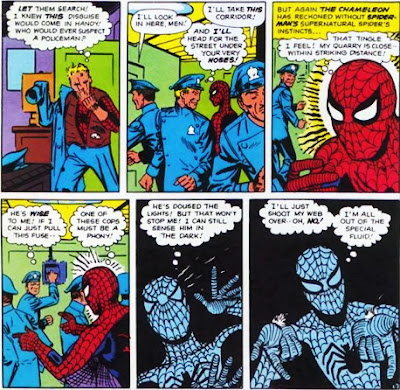 Here however, we are witness to a lame plot from the Chameleon with highly generic motivations and a weak escape plan. No tension is created though the drama is progressing around it. This is almost identical to the John Jameson rescue in story one as the set-piece is designed to be a showcase for Spider-Man’s powers but it falls short of that and is all very easy, which I suppose is kind of the point – it’s all so crisp and clean that Jonah’s doubts over its legitimacy are founded…only the situation isn’t really known on the ground level and so only we (along with Spider-Man) know what has truly happened. It’s dramatic irony, which works on an emotional level, but on a story one causes inconsistencies and issues.

By far this issue’s greatest contribution to the Spider-Man mythos is J. Jonah Jameson. Jolly Jonah comes in like a wrecking ball – the sort of antagonist who can get under your skin but who you can’t do a single thing about. Sure if this was the Chameleon you could wallop him. But Jonah is a civilian and a powerful one at that. In the months and years to come, many a surrogate would take Jameson’s place in the physical battle against Spider-Man to partially resolve this issue, but Jonah’s greatest strength early on is his ability to provoke both Peter and the reader into frustrated rage. The most frustrating thing about Jonah? The fact that he truly believes he’s right.

Jonah’s a much more complex character than he’s often written as. He isn’t all bluster and high blood pressure, rather his character is one rooted in a deeply personal crusade. We are given a glimpse of that with the previously quoted speech concerning his son being a hero. Jonah does think of his son as a real hero, one who embodies the vision of America and is willing to risk his life for his country. In today’s world where we recognise military service as a great sacrifice and often speak of true heroes, this topic is still prevalent.

While we can lambast overpaid sport’s stars or overly pampered actors or over-dramatic musicians, Jonah chooses a masked man, someone who is stealing that spotlight but also maybe showing his son up a tad. I also think there’s real fear in Jonah’s loathing of Spider-Man, a metaphor I’d suggest, for nuclear weapons in a way (another contemporary issue for the 1960s), masked men are necessary for the bad times (World War II with Cap, Bucky etc…) but are not needed in this time of delicate peace. Such characters could very easily set events in motion for disaster to unfold. More on Jonah’s hatred for Spider-Man would come to fore in issue 10.

Next Time:
Another two parter unwittingly gives us the debut of one of Spidey’s greatest foes as The Vulture takes flight for the first time but then Spider-Man must face the terrible threat of…The Tinkerer? Ah but things are not as they seem. Till next time true believers!