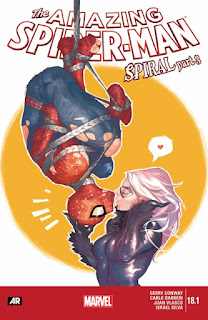 As we should all know by now, following the King Pin's absence, and Tombstone's capture, there is a vacuum of super villains trying to fill the void of leadership. Among the many contestants is the Black Cat, who seems to be doing a pretty good job at gaining the respect of the criminal underworld.

Spider-Man and Wraith are busy tearing up most of the bad guy parties in town, though Spidey worries that Wraith has given up on the moral side of the law and is now willing to take the law into her own hands. Wraith, as Captain Watanabe has also secretly been working with Mr Negative as he has been providing her with information on the latest happenings in the underworld.

The story
The issue begins with Hammerhead's gang and Tombstone's gang fighting over who currently runs the Third Precinct. The party is broken up by the Black Cat, who tries to gain the allegiance of the two gangs but fails as both gangs are extremely devoted to their leaders, even if they are in prison. 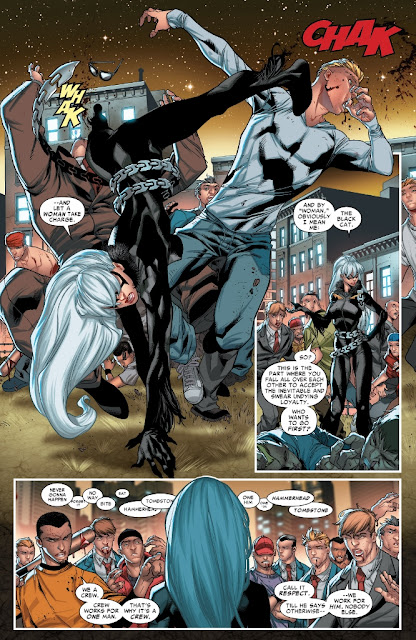 As the gangs eventually dissipate, Cat is approached by a new Crime Master, and a few thug recruits. The Crime Master offers to his assistance to gain the gangs loyalty by suggesting a jailbreak. 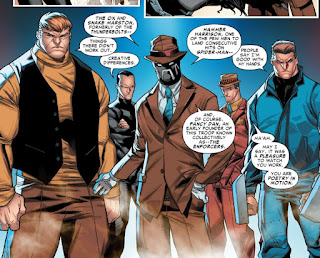 In the meantime, Parker is unable to concentrate at work as his mind is preoccupied on wondering where Wraith currently stands morally.  Later, Spidey swings out to find Watanabe and finds her consorting with Mr Negative. Mr Negative however very quickly disappears and Spider-Man is unable to find him. When approached by Spider-Man about why she was doing with Negative, Captain Watanabe fills Spider-Man in on what has been going on and that thus far, Mr Negative has been a viable source, consistently feeding her good intel. Today, he gave her a heads up on the break out that was about to happen at Ryker's Island.

True enough, over at Ryker's the Black Cat and the Crime Master's men are mid fighting the guards. Spidey and Wraith join the fight to even the odds. Spider-Man is eventually forced to choose if he should pursue the Black Cat, or follow and keep an eye on Wraith as she takes out the rest of the bad guys at the other end of the prison.

Choosing to trust Wraith to do the right thing, Spidey proceeds to fight the Black Cat. Wraith has no problem fighting her bad guys with the help of her fear gas. She later finds out from a nurse at the prison that Judge Howell, the corrupt Judge whom she put in prison is bedridden in the hospital there as he was knifed by an inmate. 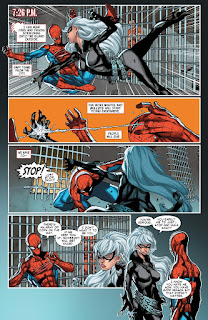 Over at the fight between Spidey and Cat, Spider-Man hearing the cops sirens yells at Cat to stop fighting, telling her to stop and walk away as he does not want to see her get shot. He tells her how he believes that she is still a good person and that he still cares about her. Grudgingly the Black Cat agrees to Spider-Man's terms and leaves, warning him however that this does not change anything between them.

Just then, Spidey hears a gun shot.  Second guessing his choice to trust her to do the right thing, he runs toward the sound and finds Wraith with a gun in her hand!

My first thoughts are that this story is moving rather slowly. In the three issues, the biggest plot line is that Wraith, a character who I truly don't care too much for, is going rogue, and Spider-Man is worrying about her stepping too far on the grey line. This story also focuses on the Black Cat, a former ally who was formerly already on the grey line, but is now way into black.

Spider-Man, the always good guys is the only one who sees things Black and White and hopes for Wraith to see things the way he does. He most likely also worries that Wraith might eventually turn out like the Black Cat.

As the story implies, Wraith has probably shot, and possibly killed somebody with then gun she is

holding. In the final scene however, we see an inmate, clearly shot in the shoulder, suggesting that she might have done just that.

One thing I did like about this issue however was that Spider-Man got a chance to have a proper conversation with Black Cat for a brief moment, giving her a chance to scram and make it out alive, much like the old days.

I was pleasantly surprised to see that Felicia accepted Spider-Man's offer, hinting at some redemption of her after all. As for what happens to Wraith, I actually don't mind if she ends up becoming like the Punisher, though I highly doubt it will come to that.