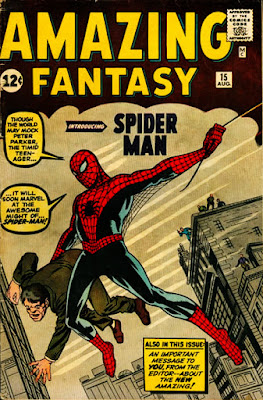 Welcome to what I hope will be the start of a long running (ominous words) series of reviews on Classic Spider-Man! First a little background on yours truly: I’ve been a Spidey fan since I can remember but I took a hiatus from the character over the past year. Upon returning to the character, I decided I wanted to reconnect with the wall-crawler by returning to the very beginning, the start of the legend, and proceed chronologically. So, I figured why not take you all along for that ride and see what we can (re)discover. With that said, where better to begin our journey than, you’ve guessed it, the origin, with the origin of our favourite web-slinger in Amazing Fantasy #15.


Plot:
Now, let’s pretend you’re a fifteen year old high-school student who is bullied, ridiculed and mocked for your intelligence and your general nerdiness. You’ve got some lug-head with a ridiculous nickname patterned after a serial action hero making fun of you at every turn and none of the girls want to even acknowledge you. There’s probably a bit of a chip on your shoulder, right? Well that’s what Peter Parker is like in 1962. He’s often cast as a mild-mannered and meek high school student but equally so, he’s a brooding, angry young man determined to prove the world wrong – with the exception of his ever loving Aunt May and Uncle Ben of course. 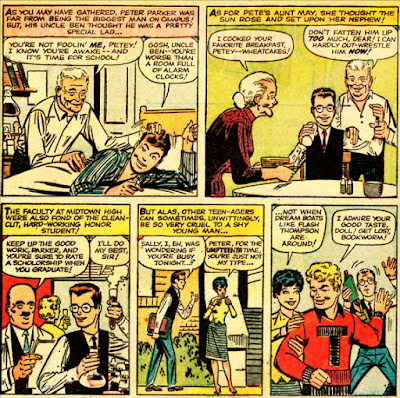 This leads us down a dark and disturbing path as Peter Parker develops superpowers from an experiment gone wrong (you know how this goes: a radioactive spider bites him) and he uses the powers he develops for personal gain becoming a masked man and sensational entertainer: The Amazing Spider-Man!

With this new found sense of power comes pride and arrogance though and he allows a common Burglar to escape. Why’d he do it? “I’m thru being pushed around -- by anyone! From now on I look out for number one -- that means -- ME!” Unfortunately for Peter Parker karma in comics has a funny way of working itself out and dear old Uncle Ben is gunned down (off panel).

Swearing vengeance, Peter, in the guise of Spider-Man, stalks New York’s rooftops until he reaches the abandoned warehouse the cops have cornered the gunman in. Like a shadowy predator, he gets the drop on this crook only to reveal: it’s the same Burglar he let get away! The Burglar is arrested and Peter is devastated. Realising it’s his own fault that his uncle is dead, Peter wonders off into the night as Stan Lee writes these very words: “And a lean, silent figure fades into the gathering darkness, aware at last, that in this world, with great power there must also come -- great responsibility!” Spider-Man is thus, immortal.

Thoughts:
To say this is a classic is like asking if Gwen Stacy bore Norman Osborn’s kids – she did but the details are a little shaky. Let’s deal with the 800 pound pink elephant in the room: it’s dated and this will be a recurring theme of Stan Lee’s Spider-Man run. His stories are very much of their time and are filled with references which in turn date them even more. The Ed Sullivan Show, the use of radiation in an open air auditorium and the notion that professional wrestling is real are all things that clearly locate this story in 1962 not to mention the design of the characters, complete with Peter’s sweater vest/shirt & tie combo which will come to define High School Spidey and every female character having short hair.

Indeed Steve Ditko’s art in general is odd. His characters are pretty garish and ugly, his proportions are bizarre and his action is off the wall crazy. Most characterise it as eccentric and indeed it is unusual, but it works oh so perfectly for this character in this time period. Had Spider-Man been first drawn by Jack Kirby (as was the initial plan – he drew the eternally famous cover) or even the great John Romita Sr. (who developed the prototypical look for Spider-Man for years to come) Spider-Man would’ve been just another hero. He might have been cool, he might still be around today, but Stan Lee would never have achieved what he wanted to without Ditko.

You see, what Ditko brings to the fore with his art is a sense of inner turmoil, an anger manifest in the world. It’s gritty, dark, expressionistic, a look into the angst and grief Peter feels through his tormented teenage years. Sounds pretty heavy, and perhaps it is, but its true. Peter isn’t handsome, he’s a nerd but then no one here is handsome – the women aren’t even pretty, they’re all eyes and teeth and it would only get more extreme from Ditko as his run went on. The point is though, Steve Ditko brings the major factor that makes Spider-Man unique upon first inspection. The look is unconventional and with it we’re intrigued.

This intrigue is then piqued when we learn that this isn’t some middle aged guy in spandex clobbering people for love of the country or a well off foursome battling intergalactic baddies and being back in time for dinner. No, this is a teen with real world problems and real world emotions.  To this point no mainstream comics had dealt with anguish, arrogance, loathing etc… Spider-Man did and it immediately made him something to keep an eye on. Superman was perfect, Batman was unflappable, the Fantastic Four were one big happy family, but Spider-Man had money problems, emotional issues and the whole human experience. 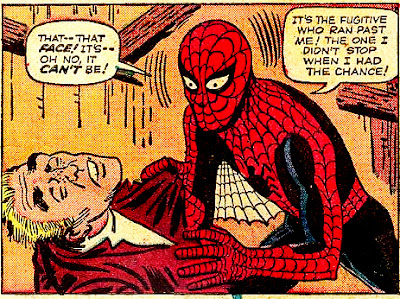 Yes the story is clichéd and hackneyed now but in 1962 this is a revolution. Okay the moralistic narrative is as old as time and is played out long before Spidey arrives in comics, but it’s never had as perfect a marriage before or after. It’s an empathetic piece that puts us in Peter’s shoes and we relate. He’s suffered a tragedy and for the rest of his days he must shoulder this. Times will get better for Peter (and worse too) but this origin highlights that very core, fundamental element to the mythos of Spider-Man and it will never change. That’s why when this origin is updated (and it has been oh so many times) the very key fundamentals remain the same: bullied for intelligence, pride comes before the fall, with great power comes great responsibility. Instantly classic.

Next Time:
You may or may not note that the iconic front cover refers to “an important message” for the reader from the editor (Stan) – Amazing Fantasy was ending. It’s surreal, short, Twilight Zone-esc horror stories were finishing up and in its place Spider-Man would receive his own, Amazing, series: The Amazing Spider-Man! And that is also our next port of call. So stay tuned for issue number 1 (they tell me it’s a collector’s item) of that exciting new series!