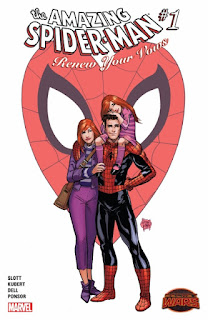 While we have not been reviewing any Secret Wars  related issues, Amazing Spider-Man, which features an alternative Spider-Man who never exposed his secret identity and remained married to Mary Jane, will most definitely be reviewed here.

This site began in hope that Peter Parker and Mary Jane would eventually reunite in marriage in the canon comics. While it is pretty evident that we will not be seeing any such thing any time soon, this short alternate story will have to suffice for now.

Amazing Spider-Man: Renew Your Vows # 1 review
Part 1: Why we can't have nice things

The issue begins with a happily married Peter Parker, dealing with real life baby problems while juggling his life as a super hero. Among such problems include the usual finding a balance between spending time with the family, and picking up the slack of other superheroes' bad guys. MJ, being a loving wife and a mom now, nags Peter a little urging him to let the other heroes pick up their own slack, and possibly some of his own. The Parker family also has to deal with their baby daughter Annie blurting out that her father is Spider-Man or something along those lines. 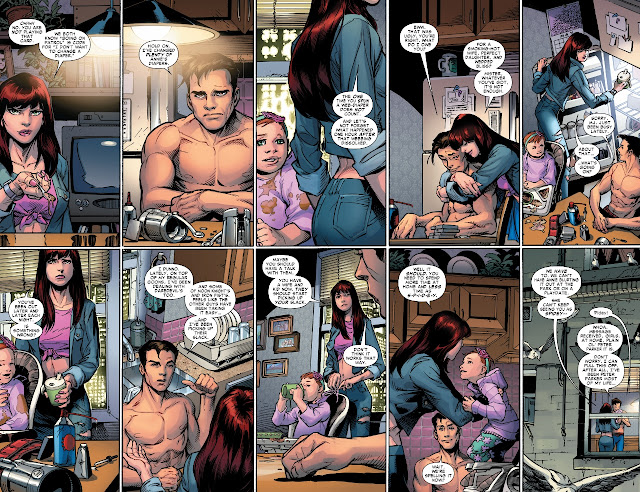 The next day at the Bugle however, we find out why exactly it is that Spider-Man has been busy fighting more and more bad guys. Ben Urich has found out that multiple heroes have been killed and gone missing including Punisher and Daredevil. Trusting Ben Urich's information, Spider-Man makes a trip to the Avengers Mansion to see if they are aware of what is going on. Spidey arrives just in time for a briefing on the disappearances.

As it turns out, all the Avengers have been aware of the heroes' disappearance for a while now. Even more alarming, is the fact that all the X-Men seem to have vanished. In this universe, Spider-Man never joined the Avengers because he was unwilling to expose his secret identity to anyone. As Iron Man points out, Spider-Man in this world is more of a loner, so much so that the rest of the Avengers did not even know he was married with a child now.

Iron Man offers Spider-Man to bring his family and come stay with them at the Avengers Mansion for safety purposes. Being a married man, Spider-Man makes a secure call to MJ to get her opinion. Their call is interrupted however when the doorbell rings over at the apartment. Just then Spidey hears Captain America calling all Avengers and superheroes available to confront who they think is responsible for the disappearances - Augustus Roman. Hawkeye, on the other line requests that he stay back to help consolidate a full scale prison breakout over at Ryker's prison. Cap however instructs Hawkeye to leave and join them as they are about to face an Omega level threat.

When Spidey hears that there has been a prison break at Rykers however, he immediately leaves the Avengers Mansion and heads home. As he suspected, Venom had arrived at his apartment with both his wife and baby in captive. 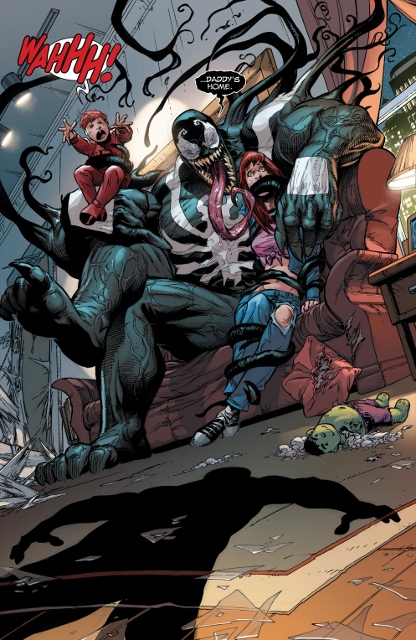 Spider-Man proceeds to beat the $#!T out of Venom as best he can giving MJ the chance to escape with the baby. Remembering that Venom's two weaknesses were sonic sound and fire, MJ hops on a Fire Truck headed towards a fire. 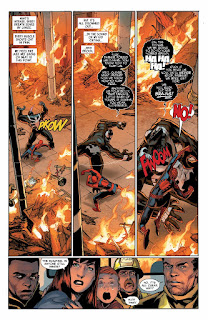 Not wanting to lose his leverage, Venom leaves the fight to chase after Mary Jane. The fight is soon taken to the burning building where Spider-Man,  realizing that Venom will never stop attacking his family, brings the building down on his foe, thus killing him.

As Peter narrates to himself, that was the day that Spider-Man and the Avengers died. The Avengers died fighting Augustus Roman, now going by the name Regent, who had absorbed all the heroes' powers after killing them.

In this world, now ruled by Regent, Peter ended up learning that family trumps the great power that comes with the great responsibility. In a not so perfect world ruled by Regent, where crime is prevalent, Peter Parker still has his family, and that to him is what is most important.

While we all know that in real life it would truly be impossible to be a superhero with enemies like Spider-Man's, and maintain a family while sticking to all the morals like no killing, yet I was half expecting this story to be somewhat along those lines, after all, it is a comic book, and anything can happen in comics can they not?

I have to say that it was kinda disappointing to see that in order for a story where Spider-Man could live happily married to exist, he would have to sacrifice his morals, give up the mantle and kill and enemy when he didn't need to. I had absolutely no idea what to expect in this story, and while it began perfectly well, the ending was a slight bummer for me.

I respect the fact that Spider-Man sacrificed so much for his family, but I can imagine the guilt of leaving his fellow Avengers behind to fight alone and die against Regent eating at him everyday, if the guilt of killing Eddie Brock is not enough.

Somehow I get the feeling that he will end up sacrificing his life at the end of this story to finally clear his conscience for abandoning the Avengers, in which case, I'd say this would be a bad story.

This was overall however a great story made quite realistic to explain to readers why it was impossible for Spider-Man to be Spider-Man and still remain married with a family. Great job Marketing... 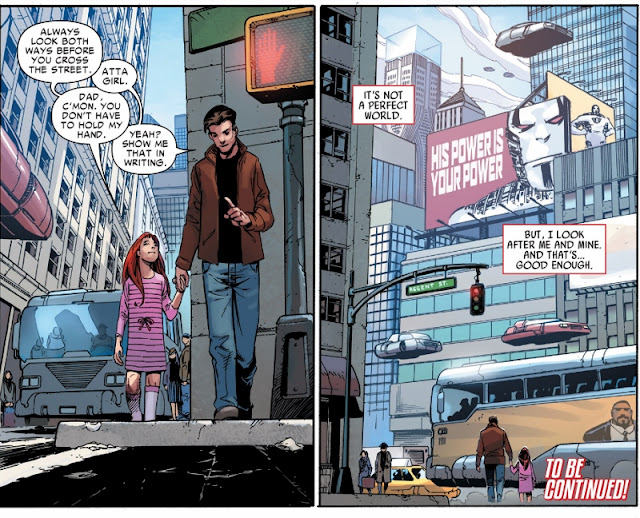