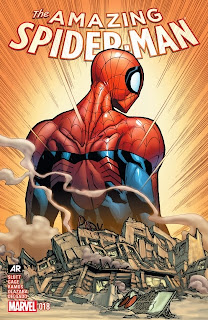 In Amazing Spider-Man # 17, we last saw Sajani, seemingly being killed by the Ghost as he had his hand pierced through her body.

As it turns out however, the Ghost had simply phased through Sajani's body, without materializing, thus causing no physical injury. Sajani's heart however suffered some slight trauma.After saving Sajani, Spider-Man tries to fight Ghost. Unfortunately, due to Ghost being " ghost like" Spider-Man was unable to physically hurt his enemy.

In the meantime, the rest of Parker Industries' staff is taking refuge in "Spider-Man's secret entrance." While most of the staff is frantic, Ana Maria and Clayton Cole decide to use some of Spider-Man's equipment to help Spider-Man in his losing battle against the Ghost. 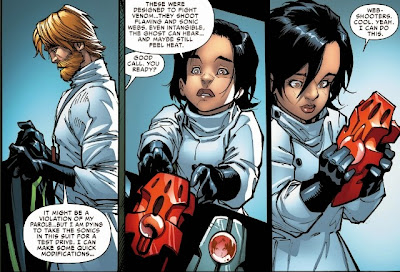 Up to this point, Spider-Man had in mind that Ghost was sent to destroy the prison project that Parker Industries was working on. Mid battle however, Ghost reveals that, contrary to what Spider-Man thought, Ghost was actually there to bring down the whole Parker Industries building and had already set bombs around the building hours before he had revealed himself. Spider-Man, very soon finds himself stuck beneath some rubble as the first bomb goes off right where he is standing.  Fortunately, Clayton and Ana Maria come soon after and fire at Ghost using sonic vibrations that Clayton cooked up and some sonic webbing designed by Peter to fight venom.

Ghost is quickly subdued and the staff of Parker Industries are led to safety before the entire building crumbles. Sajani, now recovered, focuses her anger towards Peter for not telling her that he was still secretly working with Spider-Man. She blames him for all the problems that took place. In light of having secrets out in the open, Ana Maria then rebukes Peter for keeping secrets before revealing to Peter that Sajani and herself were also keeping a secret, - i.e continuing to work on the Nanotech research. Peter is astonished that his partners have been keeping secrets from him. Having felt betrayed, Peter apologizes to Sajani for keeping his activities with "Spider-Man" a secret. As expected however, Sajani finds it hard to accept Peter's apology as sufficient remedy for all that has taken place.

Repossession Part 3: Nothing left to lose

Later, Peter goes over to his Aunt May's house to explain to her and Jay that their investment in his company has crumbled to the ground. Peter knocks on the door for a while but decides to use the spare key he has to get into the house when no one answers the door. Inside, he finds that the place has been ransacked and that his Aunt and Jay are no where to been found. Realizing that nothing valuable in the house was taken save the new antique that Aunt May and Jay had won at the auction a while ago, Peter concludes that this must have been the work of the Black Cat.

In case you're wondering how he came to that conclusion, in the last issue, Peter saw the antique at the dining table and thought it familiar, though he could not quite remember where he had seen it before. Seeing the house trashed with nothing but that item missing jolted his memory a little, allowing him to connect it all to Felicia. 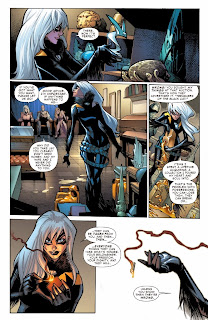 Spider-Man swings over to Felicia's old Penthouse where the Black Cat has Aunt May, Jay, and the
other young lady who won most of the items at the auction tied up. There Felicia decides to burn all her old treasures along with her captives so that she will never again have anything to lose.

Naturally, Spider-Man comes just in time to save the people. He manages to get a glimpse of Felicia and actually asks for her help. Unfortunately, as the Black Cat herself states, the old her is dead and the new her is done doing what others want her to do.

Eventually Spider-Man gets everyone to safety. Aunt May apologizes to Spider-Man for having doubted him in the past and tells him that he has her blessing to work together with Parker Industries, the company that she invested in. This leads Spider-Man to explain that Parker Industries was burnt to the ground, though it is not actually shown in the comic.

In the aftermath, the Black Cat, now the crime lord in town, warns her followers not to cross her path and to stick to her good side as there is no longer a limit to how far she is willing to go.

Thought most of us all foresaw that Parker Industries would eventually fail, be sold or come to ruin, I did not expect it to come to an end as abruptly as it did.

Regardless, it was an issue that needed to be taken care of that is now history. If there is one thing we know by now, it is that Peter Parker as Spider-Man cannot ever seem to progress as a character. Even if he does progress, they will eventually regress him again, even if it is 20 years later ( Hint)

Unlike many other progressions of the character in the past however, Parker Industries was not among my favorite things to ever happen to Peter.

For this exact reason, I am really not at all too worried about the Black Cat going down the deep end. Black Cat has always been an anti hero so to speak. As Peter had very quickly pointed out in this issue, it is probably her bad luck powers that are getting the best of her and sending her down this spiral.

Personally, I think Black Cat is being written like a teenage girl who just got her heart broken and wants to take it out on the world, very immature for a character who has gone through so much over the years in Spider-Man comics and completely out of character.

So to sum up the last few issues in four words - Parker Industries gets destroyed.