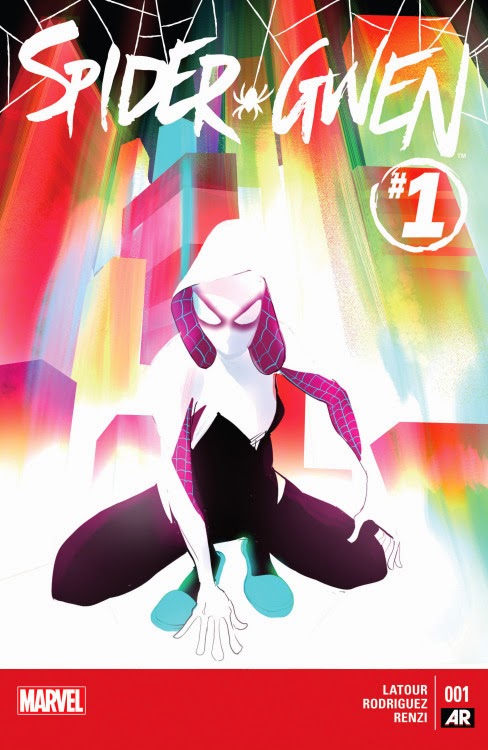 Well, it's here! Arguably the most popular of the spider personae to emerge during the Spider-Verse event, Spider-Gwen (Stacy) now has her own publication. Millions of webheads and cosplayers can't be wrong...right?

Since we already got Gwen's origin story in Edge of Spider-verse, this issue doesn't get weighed down rehashing the origin and quickly gets down to business. In order to welcome in newcomers, writer Jason Latour does provide a quick one page summary of how Earth 65's Gwen Stacy turned into Spider-Woman.

With that out of the way we immediately are introduced to this world's Yancy Street Gang who prove as much a foil for Ben Grimm on Earth 65 as they do on 616. The difference here is that ol' Grimmy isn't the Ever-Lovin' Blue-Eyed Thing, but just a regular, flesh-and-blood beat cop (albeit a rather overzealous one).

Officer Grimm climbs a billboard to corner the young YSG graffiti artists when out of nowhere swoops the Vulture! Apparently annoyed by all the attention wanted criminal Spider-woman is receiving, Vulture flies to the billboard with Gwen's mugshot on it and abducts Officer Grimm to show everyone he's a better criminal than any silly spider chump. Vulture drops Grimm from on high and lets gravity do the rest.

We transition to Gwen, who is having a bit of an existential crisis. Not only is she misunderstood as a criminal, wanted in connection with the death of her beloved Peter Parker, but she has also just returned from defeating a frightening threat to the multiverse and is now stuck catching purse snatchers and petty crooks. Bummer. 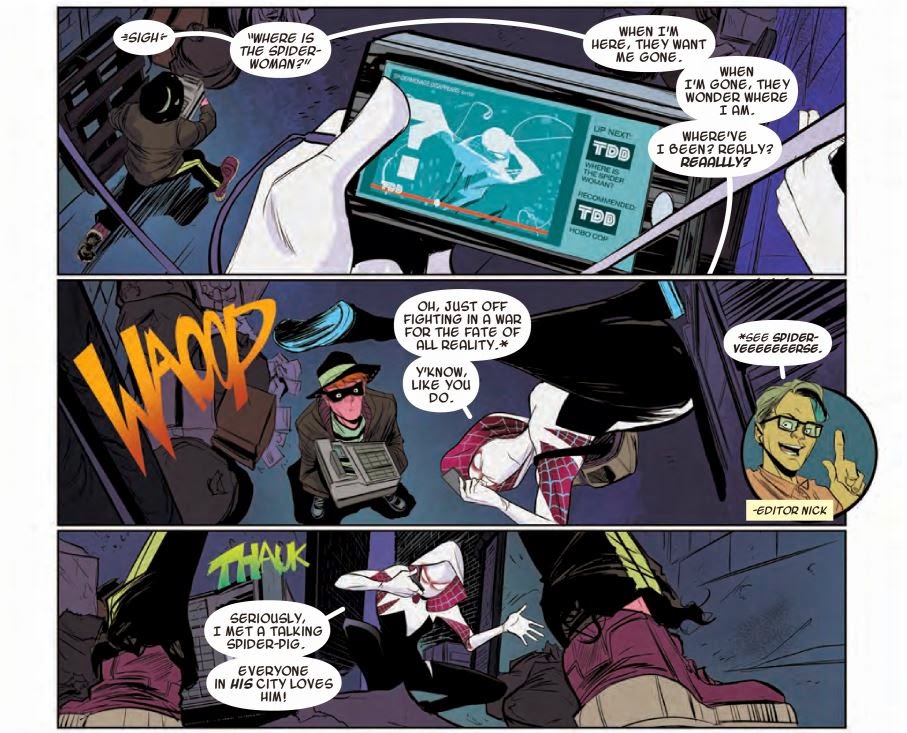 Enter Hamburglar Man! Err..I mean the Bodega Bandit! Maybe foiling his robbery will show the police that she's a good guy...or not. Turns out the register contained only 78 cents and when returned, its rightful owner actually gives Gwen grief. As annoying as the shop owner is, he does provide a nifty reference to the original 1960s Spider-Man theme song when he rebukes Gwen's query about a reward and says, "Action is your reward!" (Okay, maybe I'm the only one who geeked out over that).

Checking back in with Officer Grimm, we find Foggy Nelson and Captain Stacy in Grimm's hospital room. Foggy reiterates his support for Stacy's belief that Spider-Woman is a good guy, but informs Stacy that the mayor has caved to pressure and replaced Stacy with Captain Frank Castle on the Spider task force. Yes, Frank Castle.

We cut to Frank "interrogating" a non-Rhino-skinned Aleksei Sytsevich and it turns out this world's Castle might be even more brutal than the 616 version. Frank gets Aleksei to give up the Kingpin as his connection to Spider-woman, but proceeds to bloody him some more anyway. 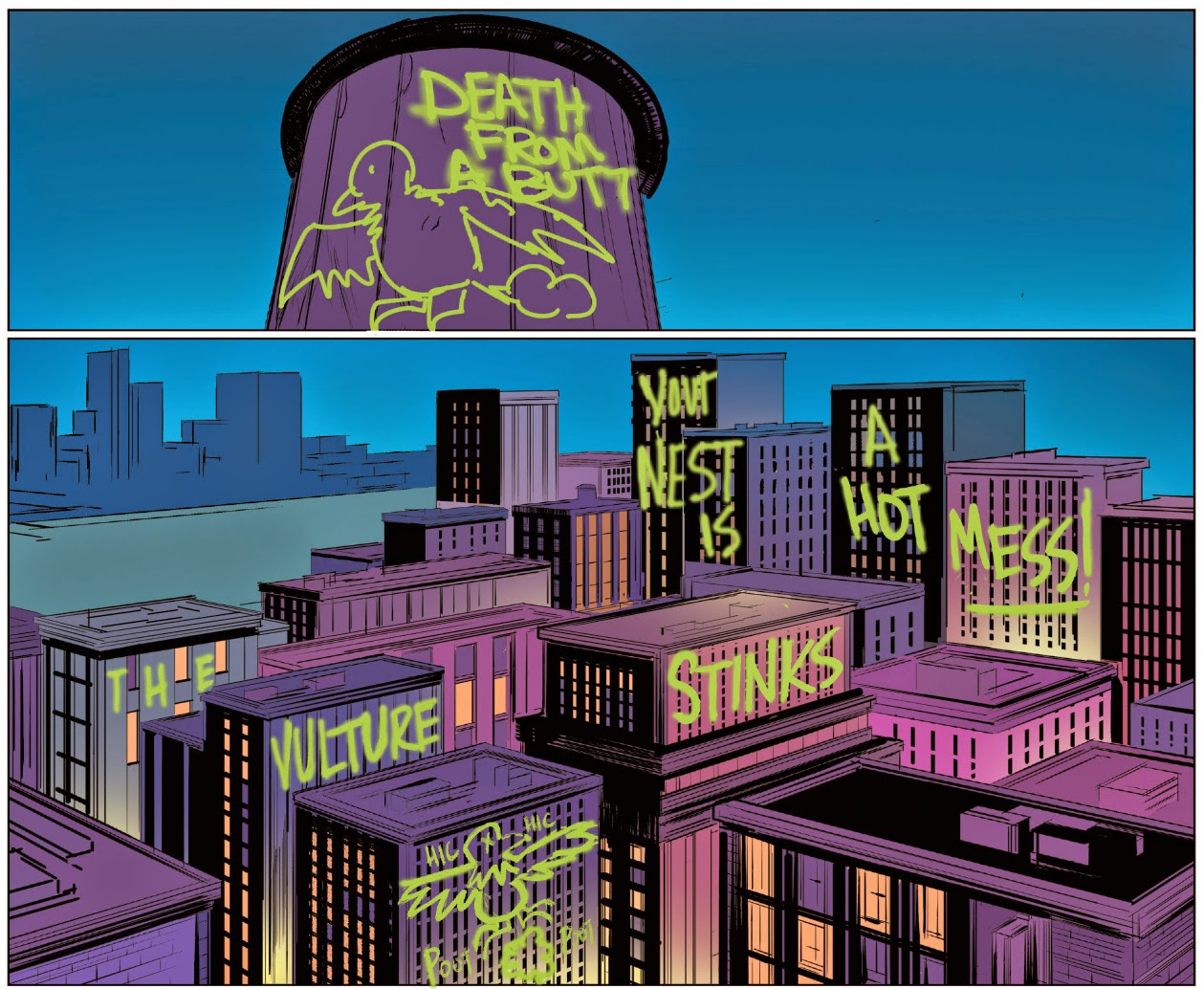 Returning to our title heroine, we find Gwen tracking down Adrian Toomes. Correctly deducing that Adrian is a bit of an egomaniac, she graffitis the area around Vulture's apartment with provocative graffiti like "Death from a Butt." The plan works like a charm, drawing out the self-aggrandizing geriatric for a wild mid-air tete-a-tete with Gwen. The issue concludes in classic cliffhanger fashion, with Spider-woman falling from her Vulture-cut webline at a perilous height over the piers, not a single structure to web in sight!

I had very high hopes for this issue and for the most part Jason Latour and Robbi Rodriguez did not disappoint. Latour writes a very quippy, super-sarcastic Spider-woman which fits in perfectly with her overall quasi-punky character. While the mouthiness during battle is classic 616 Spider-man, Gwen differentiates herself with a bit more rebelliousness - classic Spidey would never have thought to spray paint antogonizing messages to draw out the Vulture. Obviously, this is only one issue and it is impossible to say how the character will develop, but what is obvious is that this Earth 65 Gwen Stacy is already a million times more of a fleshed-out and interesting character than was 616 Gwen.

The artwork does a great job of capturing the punk/rebel vibe of Spider-Gwen. The trippy neon greens and purples can border on being too much, but Rodriguez and colorist Rico Renzi toe the line just enough to keep us sane. The facial expressions of Rodriguez's characters work well in action scenes, but when characters are having a somber conversation the overly-expressive faces can be a little much.

I was not alone in anticipating this issue and it did not disappoint. It is exciting to have a legit, cool, mouthy Spider-woman who seems to be developing her own distinctive character. For its significance alone this issue is a must-read, but Latour and Rodriguez ensure that your reading experience will also be an entertaining one.