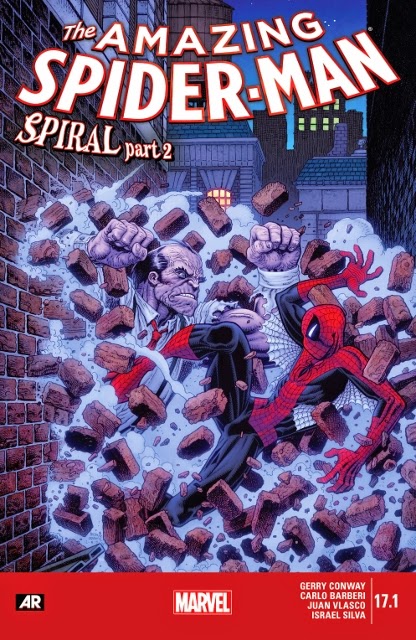 This issue is a side story that continues from Amazing Spider-Man 16.1 .

With Tombstone busted in the last issue, Hammerhead and the Hobgoblin, now going by the name "Goblin King," are trying to fill the vacuum for power over the Third Precinct. The two make bets with their fighters in the ring. The fighters would fight to the death and the winner would take control of the area. The meeting however is broken up by Spider-Man. The Goblin King takes off immediately, as does Hammerhead, as soon as he can, namely while Spider-Man is busy taking care of Hammerhead's fighter from the ring.

Having lost all the bad guys, Spider-Man then proceeds to head to Captain Watanabe, who is in the Third Precinct to update her on what he knows ( mostly nothing except that Hammerhead and the Goblin King have plans involving her precinct) 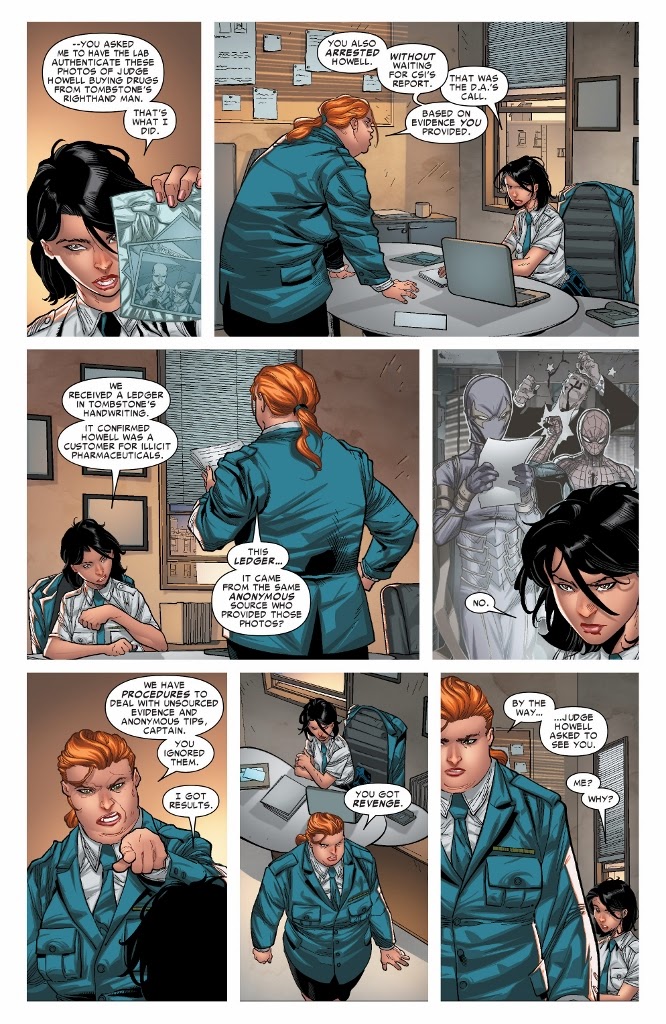 orders and not bringing lawful evidence the correct way as according to the system as seen in the last issue. She is also instructed to pay Judge Howell a visit at prison. ( Watanabe jailed him for buying drugs from Tombstone's second in command as told is the last issue) The judge explains how he bought the drugs for his wife who got addicted after her surgery. Watanabe's shows no sympathy and rests assured that Judge Howell deserves worst than to be in prison, believing the Judge purposely allowed Tombstone to walk guilt-free because he needed the drugs from him.

Later, Watanabe gets another tip from Mr Negative, regarding the cage match/ bet between Hammerhead and the Goblin King and its location. With the tip on the time and place, Watanabe, as Wraith decides to pay the bad guys a visit. Spider-Man spots her while swinging and decides to join.

Over at the ring, Hammerhead's fighter, having been busted by Spider-Man earlier is not present to fight. Goblin King thinks he is about to win the bet, but Hammerhead surprises him by going into the ring himself. He easily kills Goblin King's fighter, claiming victory. Just then however, Wraith and Spider-Man swing in and spoil the show. 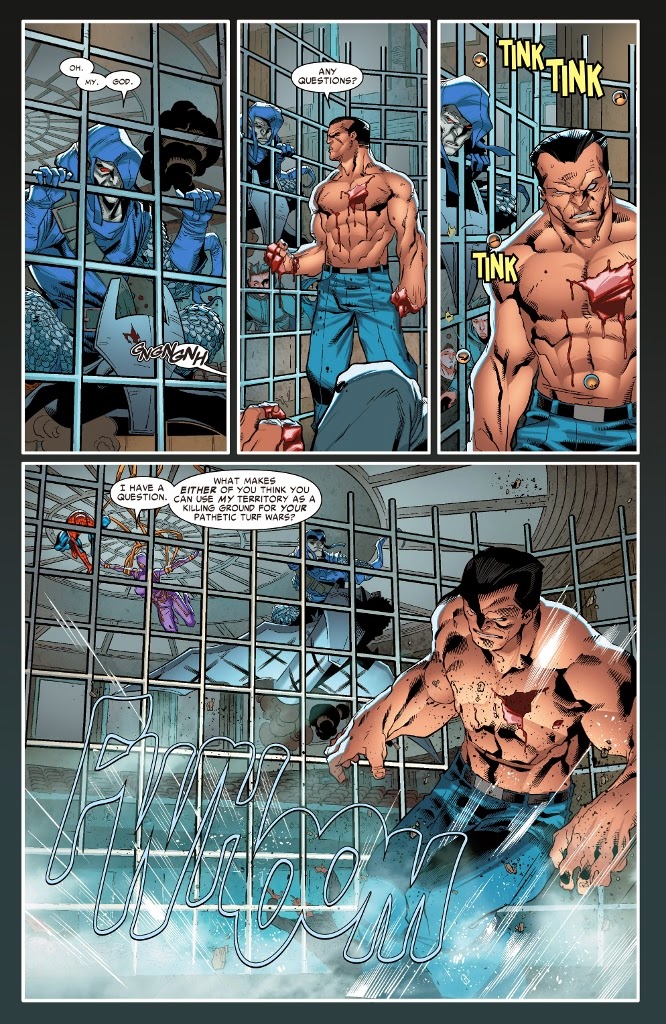 Everyone gets busted except for Goblin King who again manages to escape. In the final scene, Spider-Man realizes that Wraith is more concerned about protecting her turf than about protecting people and catching bad guys. He tries to explain that the photos from her source  (Mr Negative) gave her had to be taken from someone on the inside, implying that Tombstone was betrayed. Wraith however can't seem to care about how things are done, but is instead more concerned that they are done!

In the background we see Mr Negative sitting on a chair watching everything play out as according to his plan. 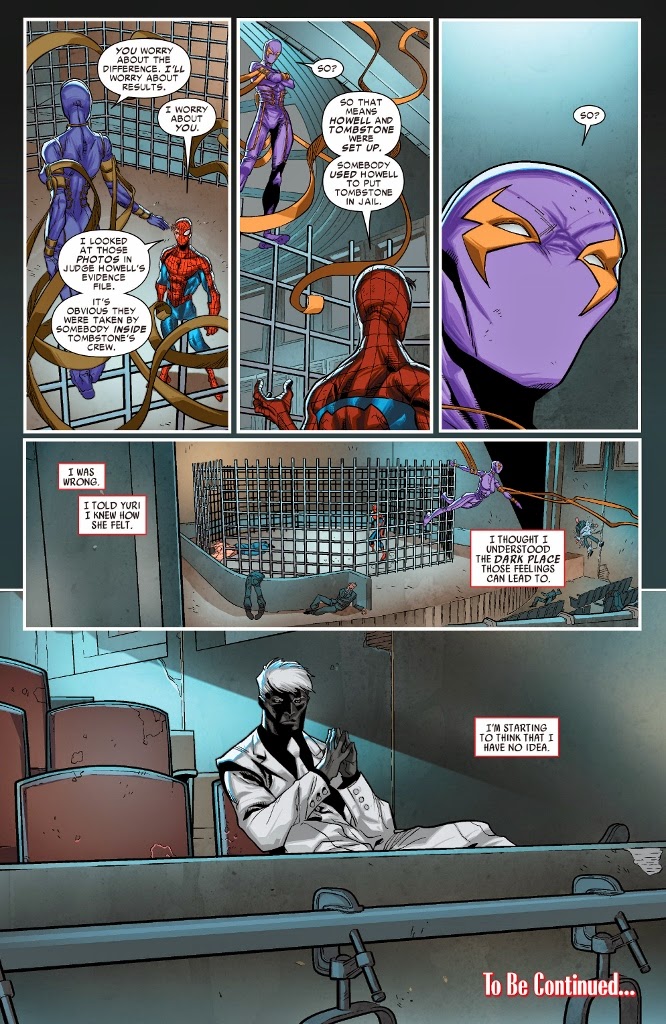 The Spiral is more of a story about Watanabe rather than Spider-Man. This story appears to be the turning point for Wraith, from a good law abiding cop, to a bitter woman who realizes that the system is not going to work as long as corruption is present. As such she takes it upon herself to take the law into her own hands in order to provide the evidence required to put the guilty behind bars.

As implied in the last scene, Wraith no longer cares about how the job is done. Her main objective is to make sure it is done, even if it means working with criminals like Mr Negative to do so.

In this issue, Spider-Man tries to be the Angel on Watanabe's shoulder, doing his best to remind her of what they do and why they do it. Up to this point in the story however, his advice seems to be falling on deaf ears. Spider-Man has been sticking around to ensure that Wraith does not do anything silly that she might regret later. He is also taking it upon himself to ensure that she stays on the right side of the law.

Mr Negative is actually the true mastermind behind everything that has been taking place in the last two issues. He had a man on the inside to spy on what Hammerhead and Goblin king were planning. He was also the one who betrayed Tombstone, or at least had a man on the inside do so. In doing so, Mr Negative has, in the last two issues, eliminated the criminal lord of the Third Precinct as well as any other possible competitors who may rise to fill the gap, thus leaving no one but himself to run crime in the city.

While this is really a side story for Spider-Man, it is a must read for any Wraith fans out there! Till the next issue...

... and here's a ridiculous pose from Yuri Watanabe for the album..