The Story
This all begins with Maestro walking through his palace when he is approached by the minister of the place. The minister respectfully questions allowing Spider-Man to be in a room with the Sorceress Supreme. It is implied that Maestro realizes what he had done and intended for it to be that way. 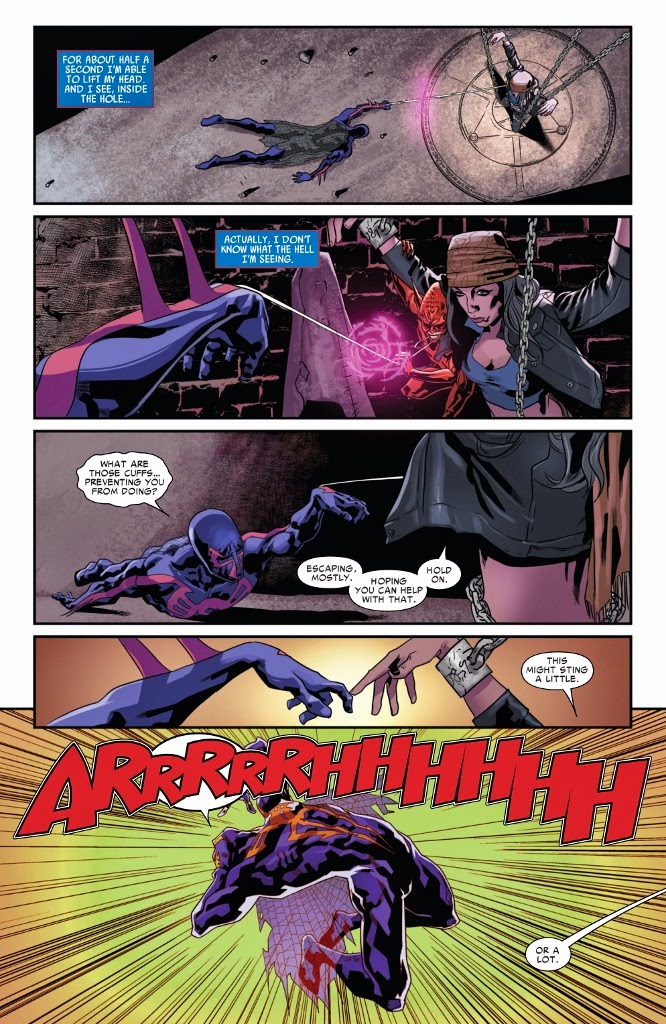 Over at the prison cell, Spider-Man 2099 is dying after having been
beaten nearly to death by Maestro as see in Spider-Man 2099 #9. Strange however manages to heal him after she instructs him to fire a web line at her so she could pass some healing magic to him. In case you were wondering, Strange is bound in mystical chains that prevent her from moving.

The two soon escape and head to Maestro's trophy room, where a broken time travelling machine is supposed to be. As we later find out, Maestro, despite being Bruce Banner, has lost touch with his human side so much so that he is unable, or unwilling, to try to fix the time machine on his own.

Inside the trophy room we see some souvenirs from heroes and villains that Maestro had killed over the years, among them is Dr Doom's time travelling machine. With the help of some Iron Man equipment lying around in the room, Spider-Man is able to fix the machine. 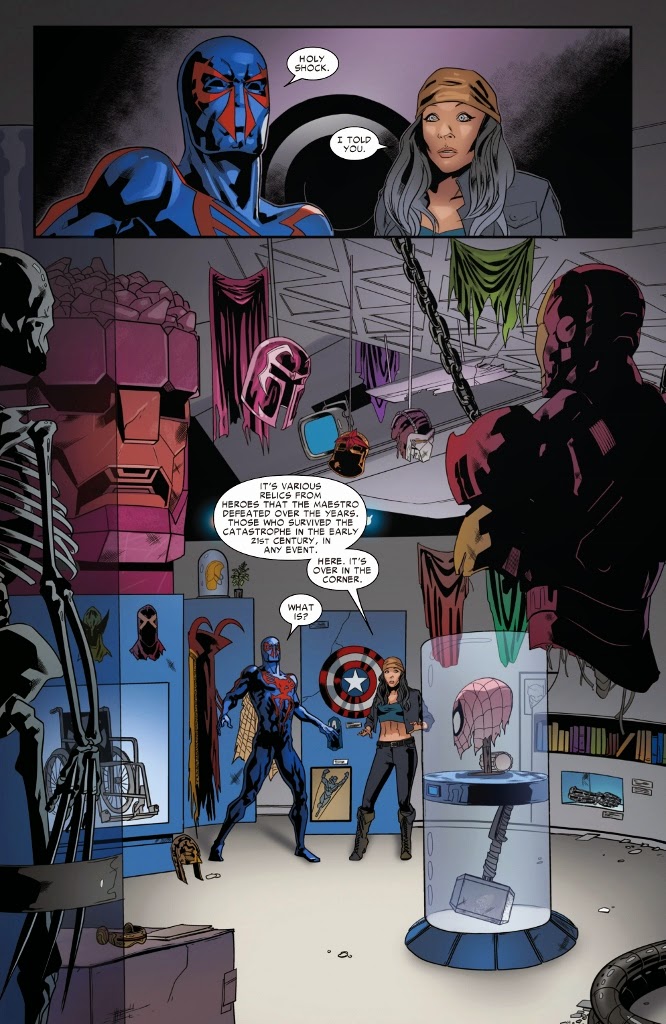 His joy is soon brought to an end however when Maestro comes out of an invisible cloak and kills Strange with a soul dagger. Thinking quickly, Spidey swings across the room and fires at Maestro with one of Iron Man's blasters before going through the time machine, seemingly killing the brute.

Spidey 2099 is then seen back in time, but without the remote for the machine. He then swings off hoping that Maestro died from the blast. Back in 2099 however, we find out that Maestro is still alive, and so is the Sorceress Supreme, who is actually someone else who has Strange trapped in her body!

In the final page, Maestro is seen having traveled back in time on Christmas day, ready to conquer the world again!

From the start of the issue we all knew that Maestro had been planning for Spidey and Strange to escape. As the minister pointed out, it was quite a silly move, unless it was all planned.

While it was intended for the reader to suspect that Spider-Man was falling into a trap, I'm sure I speak for everyone else as well, that nobody could have possibly foreseen that the Sorceress Supreme was not actually who we thought she was. I wish I'd read more 2099 books to know who exactly this impostor/ Strange Captor is. Essentially, this story carried a brilliant twist that just earned Maestro some new respect as a bad guy. Great writing thus far. With even more time travel and universe jumping, we are bound to see the universe collapse as we know it in no time, as has been hinted for months now in other marvel comics as well.

Will Spider-Man 2099's story have a link to Secret Wars?