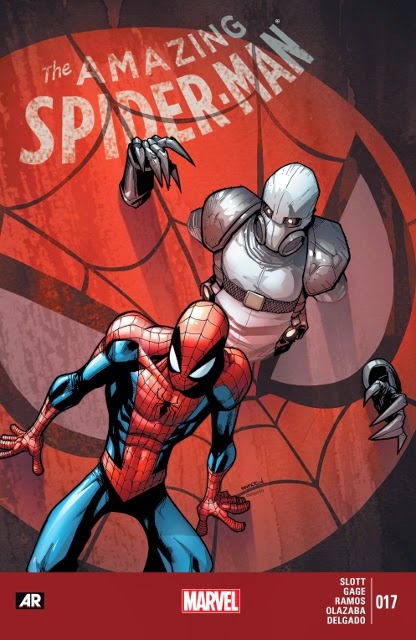 Needless to say, this is part two of the Graveyard Shift, which started in Amazing Spider-Man # 16. It starts with Peter and Ana Maria having dinner at Aunty May's place. During dinner, Aunt May makes a comment about Ana and Peter getting married. Ana Maria saves Peter's ass by explaining very quickly with a valid reason why they broke up.

During dinner, we also see a centrepiece which Jay and Aunt May won at the auction they were at in the last issue. Peter finds it familiar but can't seem to remember where he's seen it before. As readers however, we all know that it used to belong to the Black Cat.

Peter and Ana then swing over to Parker Industries and enter though a secret entrance as they are already late for the testing of the new prison for super villains. Over at the lab, Sajani, is as usual, complaining about Peter and how his idea to catch and reform the bad guys the lame. Clayton, being a former villain himself tries to explain to her why it is such a good idea.

Everyone is soon present and the testing begins. Unfortunately, it is sabotaged by the Ghost, whom we saw was hired by Tiberius Stone is the last issue to sabotage and destroy Parker industries.

Things get hectic and soon the Parker Industries staff are scattered and getting themselves in harms way. Peter is forced to use his powers to help get the others to safety. Ana Maria covers for him again  with spectacular excuses as she had already done several times up to this point in the issue.

Ock's robot helper, now called the Living Brain, is tasked with the responsibility to get everyone to 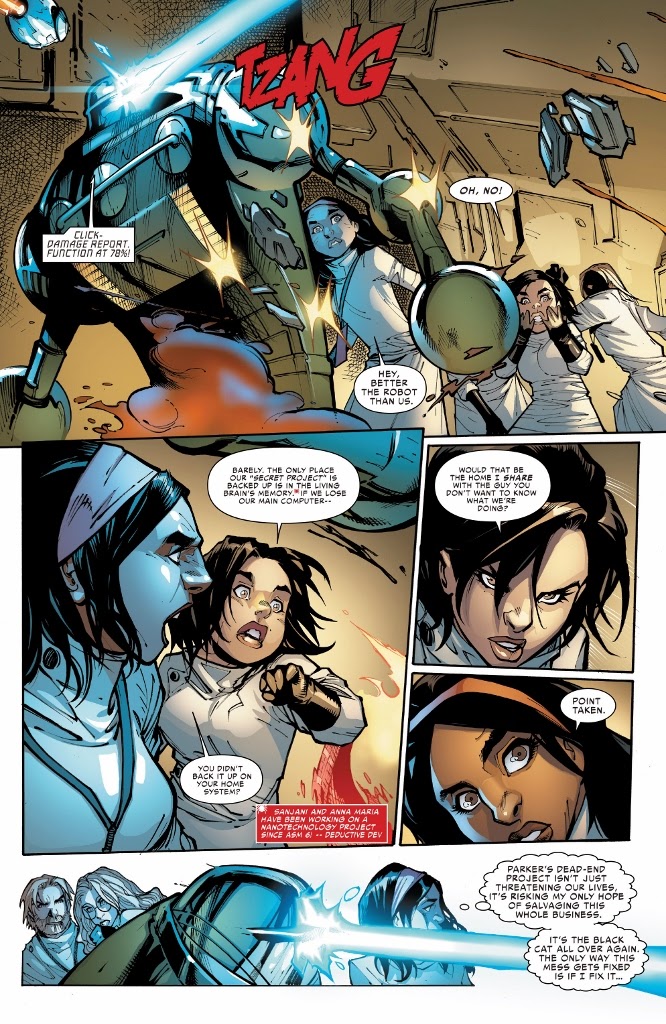 safety and out through Spidey's secret entrance. Again, Ana Maria gives a brilliant excuse for why Spider-Man's gear would be in Parker's secret lab. However, the Living Brain soon begins to take some damage, and Sajani grows anxious since all her work which she and Ana had been doing on the side is stored in the robot.

Sajani soon disappears and finds the Ghost. She explains how she found which room he was operating from and offers to help destroy the lab in exchange for the safety of the people. ( By this point she is tired of Peter and his whole company and is willing to help sabotage it.) Ghost is intrigued by her offer but explains how his purpose is to kill everyone.

In the final scene, we see Spider-Man, finally changed into his costume entering the room just as Sajani is being killed by the Ghost. 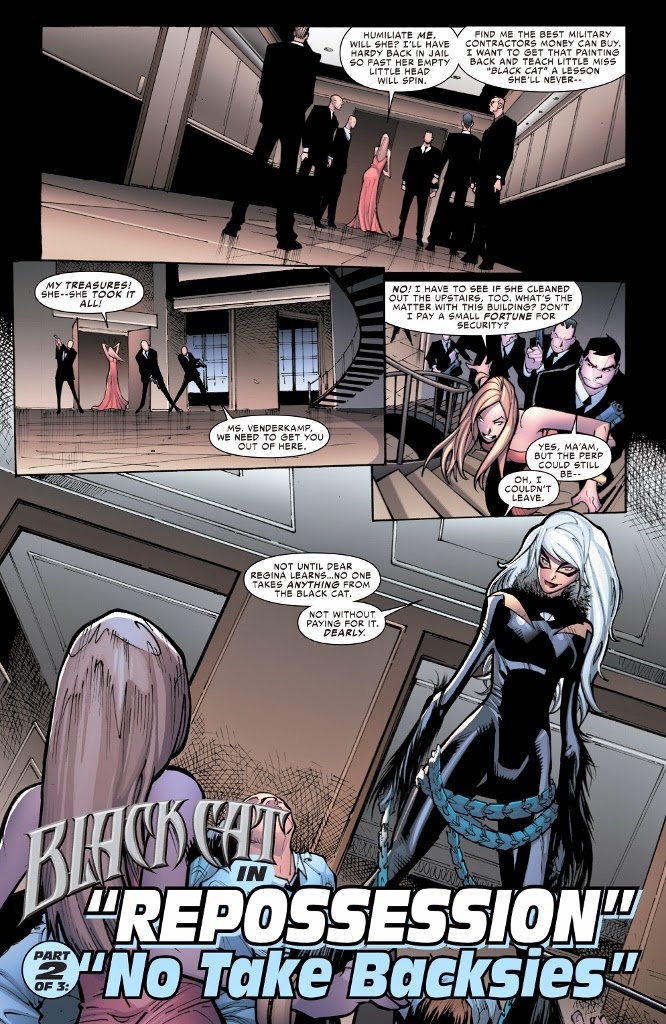 Just like in the last issue, this issue too has a second part to the second story revolving around the Black Cat. While the title of this story doesn't quite make sense to me ( what's a backsy?), the story is pretty decent for a secondary story.

To summarize it quickly, Black Cat re-steals all antiques, paintings and other such items from a rich blonde named Regina, who bought all the Black Cat's items at the auction in the last issue.

While in the last issue I made the assumption that the blonde was just Felicia in a blonde wig due, it turns out that she is actually a completely different person. Anyway, Felicia robs, drugs and keeps Regina hostage by tying her up and explaining how she likes to play with her prey. When going through her treasures, Felicia realizes that there is still one piece missing. We then see the Black Cat peeping though the window to Aunt May and Jay's home where the last piece of her treasure is.

This whole story is really slow, yet enjoyable. With Aunt May getting caught up in the mix, things will soon get really personal for Spider-Man, resulting in a long awaited rematch between the ever growing lucky Black Cat and Spider-Man.

Starting up top with the first story, I'm actually a little glad that Parker Industries is being destroyed. I never was a fan of Peter owning a whole company. Though great for his financial situation, Peter running a company is just not in his character.

Sajani, being a little b*tch got her self in trouble, and will most likely never live to regret her actions.

The main focus of the first story however is not so much about what is taking place, but more to make a point about how great Ana Maria is at covering for Peter's disappearances. Though they may no longer be together as a couple, Ana Maria still proves to be a valuable friend whom Peter would be foolish to remove from his life.

The end of Parker Industries would also probably mean a huge loss of investment on Aunt May and Jay's end. However, their soon-to-be encounter with the Black Cat will probably put some things into perspective and make them forget about their petty investment and treasure their lives more.

It would also probably be the last time they decide to buy auctioned goods from a super criminal! Also, as mentioned earlier, I am looking forward to the second battle between the Black Cat, who now has a major upgrade on her good luck powers, and plain ole normal Friendly Neighborhood Spider-Man.

Finally, I also kinda liked that we got a glimpse of what Mary Jane has been up to in her giant billboard advertisement for her own brand of perfume. 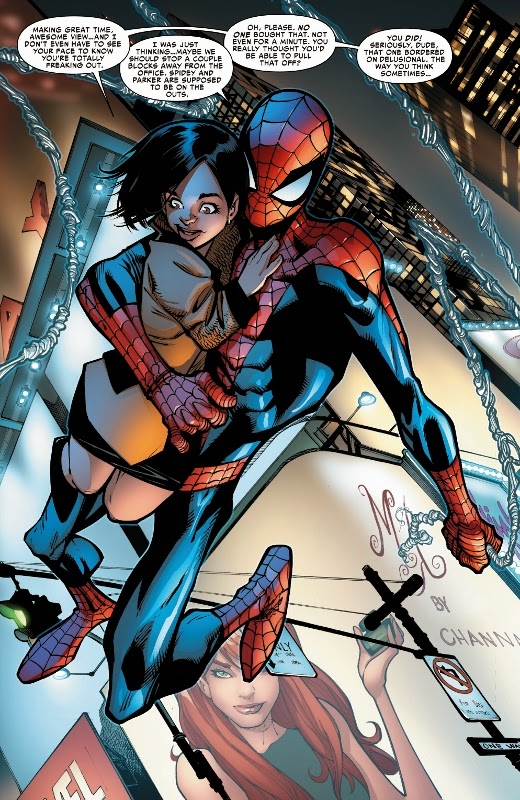 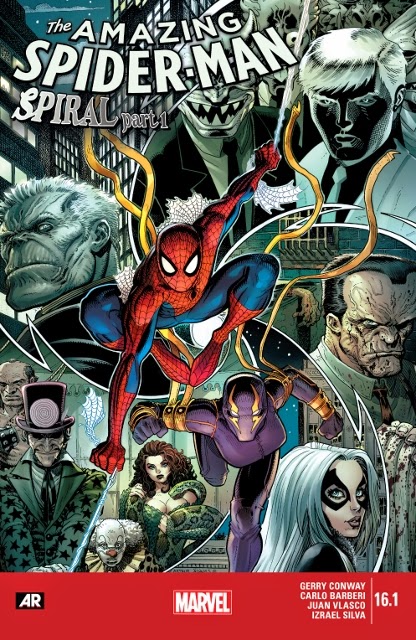 This issue begins with Spider-Man swinging around the city one night, looking for some crime to stop. He comes across Capt Watanabe with her team, trying to prevent a gang war. She tries to play things by the book, not using her alter ego as the Wraith to interfere. A source claims that Tombstone, leader of the gang is gearing up at the site.

Though the cops aren't certain for sure if their source is reliable, it is soon clear that they are indeed at the right site as one of Tombstones men accidentally open fire. The site soon becomes a shooting range and one of Captain Watanabe's men are shot. Spider-Man swings into the building where the enemy is camping and manhandles the bad guys. Tombstone is soon caught and has his trial eight days later. 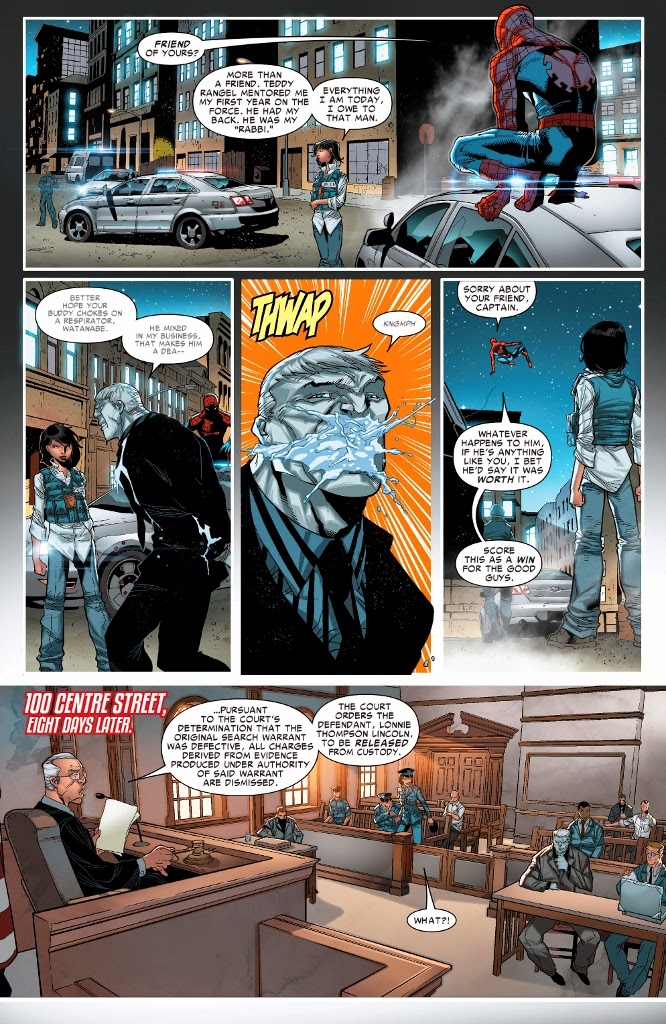 At the trial, Tombstone is set free on grounds that the original search warrant was defective. Captain Watanabe is then seen at the hospital where her fellow officer is being cared for. Peter visits her and the two talk about crossing the line between right and wrong for the greater good. While at the hospital, the shot officer goes into emergency.

We later see Captain Watanabe at a graveyard, signifying that the cop died. At the grave site, she is visited by Mr Negative, who claimed to be the "Source" for Tombstone's base camp. He tries to gain her favor, telling him that he has no foul intentions as they share a common enemy. He then passes her evidence that the Judge was corrupt. 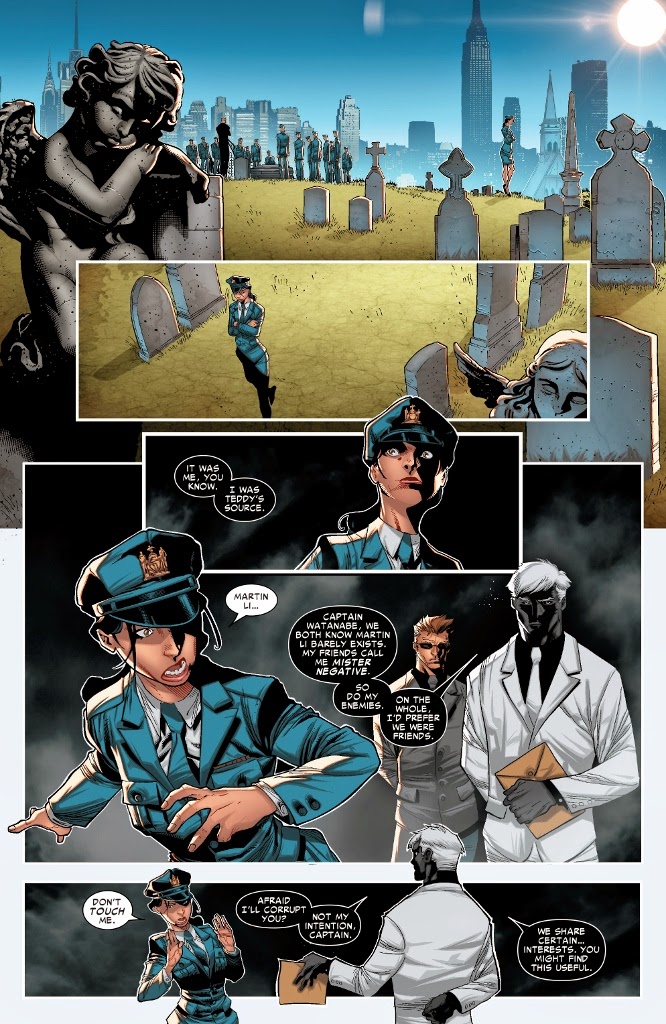 With the new evidence, Captain Watanabe approaches her superior, who unfortunately claims that more proof is required. Seeing no other choice, she takes matters into her own hands with the help of Spidey to find Tombstone. 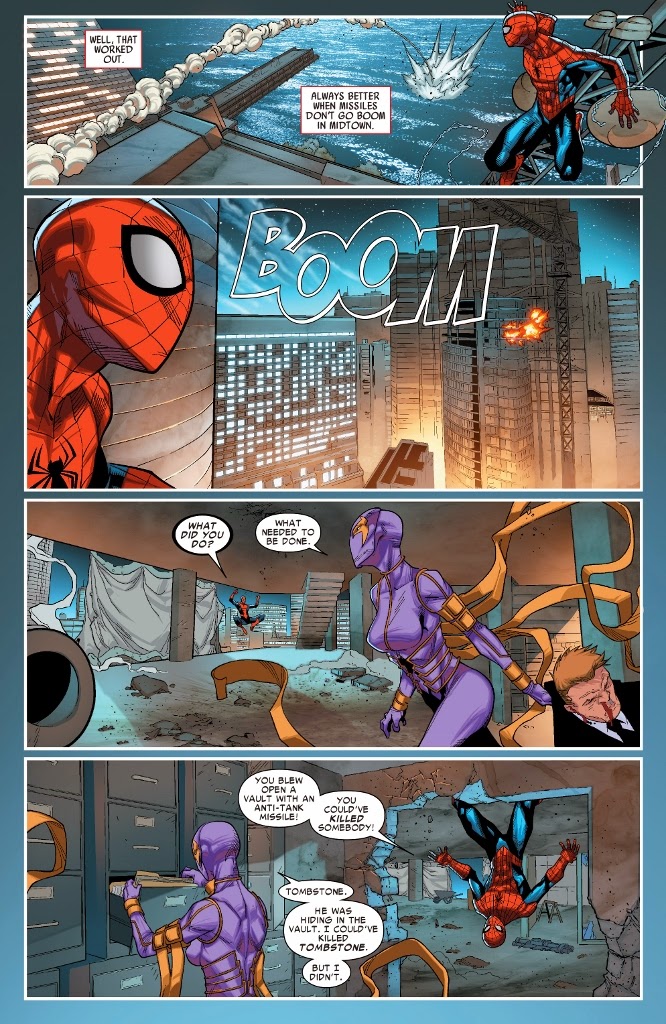 fight. When Spidey comes back, he finds that Wraith caught Tombstone at a high risk of hurting others. The issue ends with Wraith leaving, and Spidey left wondering where Wraith may be heading as far as her ethical code of conduct is concerned.

This was a really simple story in which Spider-Man is more of a featured guest rather than the main character. The main character in the issue is Captain Watanabe, who is struggling to be a good cop, but realizes by the end of the issue that nothing and really be done if she sticks to protocol. Contrary to what TV shows like CSI, Law and Order, NCIS and all those other cop shows imply, sticking to the law doesn't quite get you very far when placed in a world filled with Vigilante's and super villains.

Overall a fun issue advertising Wraith more than anything else in hope that she will gain some popularity and possibly some day sell a title of her own. In the meantime, Wraith rides on Spider-Man's fame and popularity, hijacking a whole Amazing Spider-Man issue.

Though we haven't seen her since Superior Spider-Man, somehow Wraith didn't seem to be missed very much, especially with the whole Spider-Verse event taking place.

This is a must buy for Wraith fans, if there are any. If you're not too interested in this story however, I don't think it will be necessary to buy the rest of the issues related.