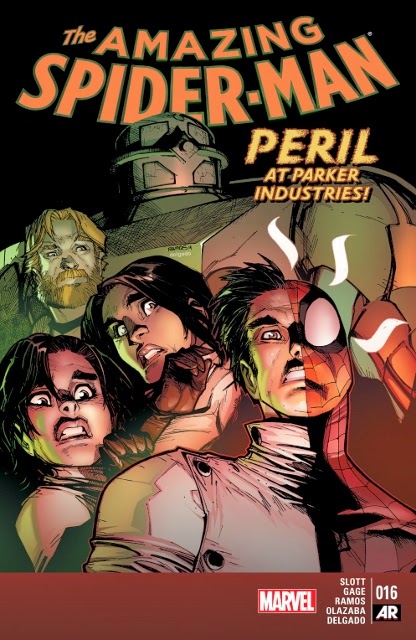 This is the first issue after a really long time where only there is only one Spider-Man and one Peter Parker. Strangely though, we have a new bad guy involved who think he is the Lizard. He calls himself the Iguana and has the same ideology as the Lizard.

Anyhow, Spider-Man is back to his usual business of fighting bad guys and forgetting about his job at Parker Industries. As the title suggests, Peter Parker is very late for his project presentation at Parker Industries because he his busy fighting the Iguana at the zoo. 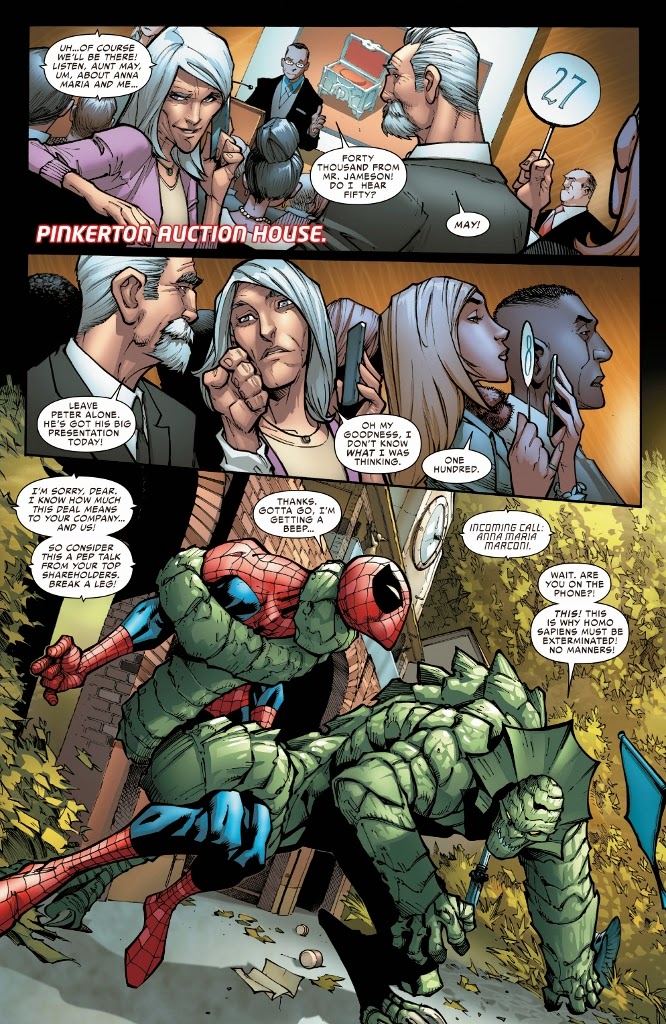 The Iguana, being a B-class villain however, is no match for Spider-Man, and despite having his life force partially sucked out is Amazing Spider-Man # 15, Spider-Man is able to fight him off while talking on the phone for about nine pages of the issue.

His phone calls are from Aunt May, who is with Jay, bidding for some antiques, to check up on him
and Ana Maria. ( Aunt May still thinks they are dating). Aunt May eventually lets her nephew go as she is reminded by Jay about how busy Peter must be preparing for his presentation. Little does she know however, that that is not at all what he is doing.

Spider-Man next gets a call from Ana Maria who scolds him for neglecting his responsibilities. The phone is then snatched by Sajani who further scolds him even more. Spidey however can only concentrate on fighting the Iguana until Sajani mentions Alchemax possibly getting the project if he does not show up. At the mention of Alchemax, Spider-Man wraps up the show with the Iguana and gets to Parker Industries as soon as possible. 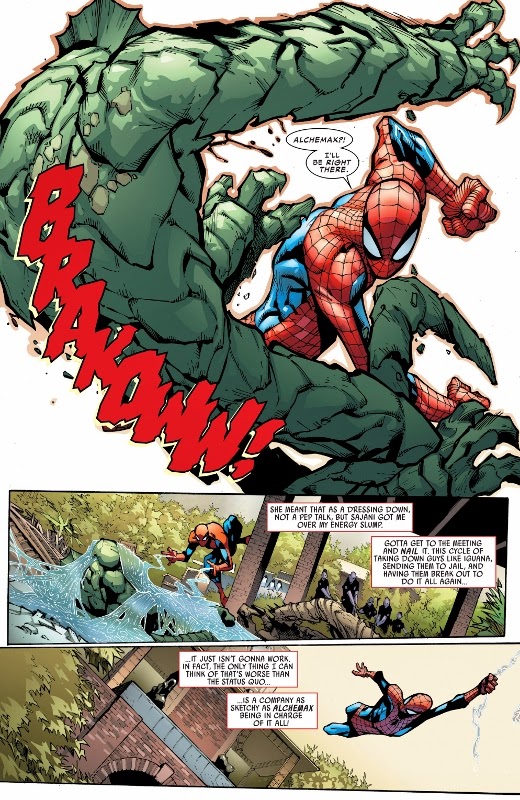 Over at the Department of Corrections meeting, Alchemax is giving their speech led by Tiberius Stone, greatly impressing the audience. Among Parker Industries competitors are Alchemax, Roxxon Industries and Empire Limited.

Peter arrives just in time, and though Liz Allan, director of Alchemax and his former classmate pretends to put him down, she secretly acknowledges that Peter has always managed to "..snatch victory from the jaws of defeat." She then makes a passing statement about throwing a monkey wrench into his plans.

Upon hearing this, Tiberius and Mark Raxton, current head of security and reformed Molten Man thanks to Alchemax's cutting edge technological cure, take it upon themselves to "remove" Peter from the competition.

We then see them approaching the bad guys hideout, where the Black Cat is currently running the show. In the building they somehow bypass the Black Cat and approach Ghost directly, who agrees to eliminate Peter Parker.

As the title suggests, this second story is about the Black Cat rather than Spider-Man. It builds the background for Felicia's second attack on Spider-Man, but also possibly her redemption from this evil phase she is going through.

In the issue, we see the Ringer, beaten badly and brought before the Black Cat for shortchanging her weekly. The Ringer gives several legitimate reasons for why he needed the money. He begs for Felicia's forgiveness, reminding her that they used to work together on separate occasions. He also appeals to her softer side, reminding her of how she used to have a heart. She stalls for a moment, actually considering his request but immediately changes her mind when the Ringer uses the opportunity to try to break free and escape. His attempt is almost successful, even cutting the Black Cat on her arm! 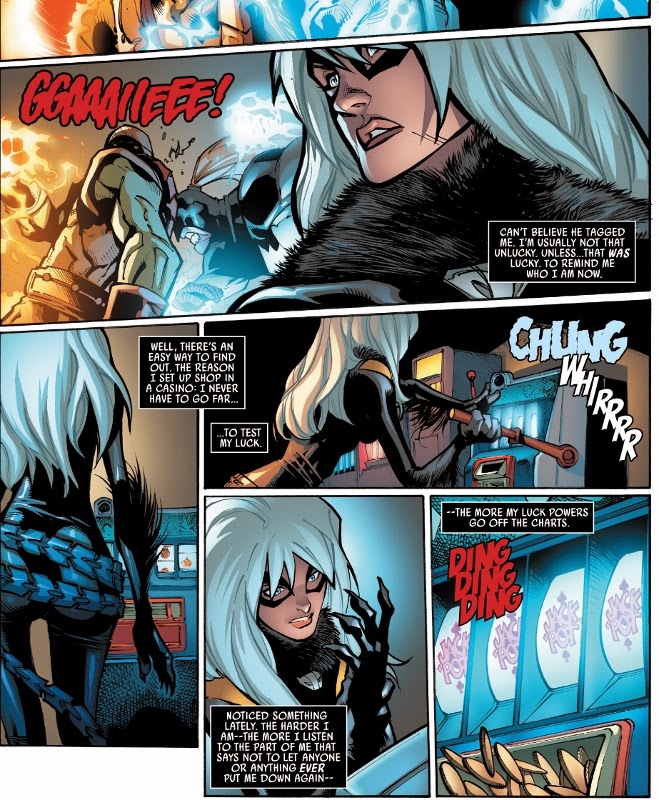 The Ringer is caught and made an example of for everyone to see. Worried that she has run out of luck, she has a go at a Jackpot slot machine. Having hit the Jackpot, she then realizes that she was indeed lucky to have only gotten a cut on her arm. She also notices that with her new attitude of not allowing anyone to put her down, her luck powers are immensely more powerful.

Felicia reflects on how she has stolen a lifetime of possessions but can still not steal what was stolen from her, namely her life and name before the Superior Spider-Man screwed her over.

We finally see her in civilian clothes at the same auction that Aunt May and Jay are at, outbidding everyone in the room for the goods that were once stolen by the Black Cat. She then vows to steal every last bit of her previous life back.

The first story involving the Iguana, but more importantly, the presentation of the super villain prison was extremely lengthy considering how little took place. For the first half of the issue, Spider-Man is fighting the Iguana. The Iguana, much like the Lizard, wants their reptilian kind to reclaim the earth.

The story was without a doubt a refreshing classic tale of Spider-Man juggling work, spider-work, and family. However, in my opinion it lacked a little depth. Considering the last several deep issues, and potentially more of those just around the corner with Secret Wars, this story serves more as a breather rather than anything else.

The second story brings us up to speed with the Black Cat, who, before Spider-Verse, was the leading story since Peter's return to his own body.

Black Cat seems to be running things perfectly fine as a crime lord, with her her lucky powers getting stronger the more badass she becomes. As pointed out in this story however, we see that the Black Cat may not quite be as lost as she portrays herself to be.

At the end of the story we see that she is dead set of stealing back every part of her old life again. It'll be quite interesting to see how that turns out.

As a final passing thought, how is it that no one can recognize Felicia in the auction room, bidding for items that the Black Cat stole, especially since everyone already knows Felicia is the Black Cat and should know what she looks like. Sure she has blonde hair in her civilian costume, but didn't she use to do that before sometimes as well? 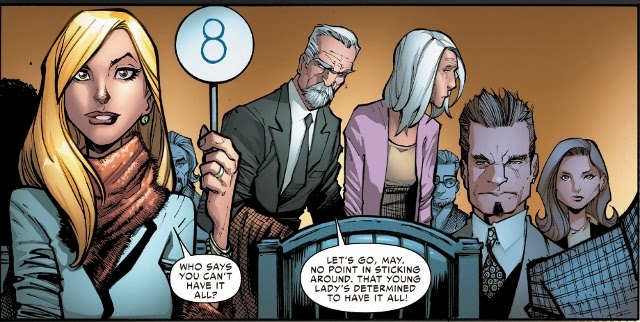