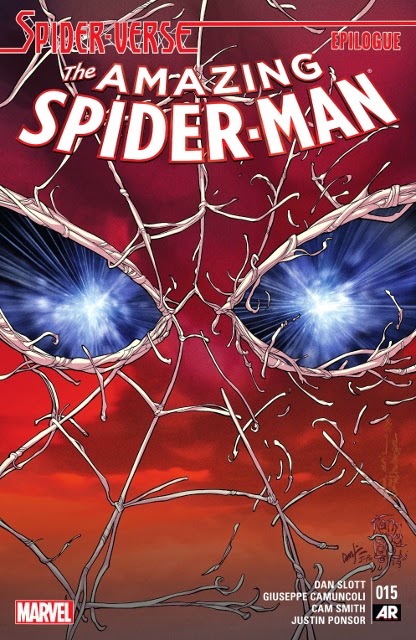 After the battle between the Spiders and the Inheritors in the last issue, most of the Spider-Men and Women say their last goodbyes to their new friends before heading back into their respective worlds.

May Parker returns to her world to find Uncle Ben Spider-Man, her baby brother, her boyfriend, and her mom ( Mary Jane) still alive and well. Uncle Ben asks if he can stay on their world and be a grandfather to Baby Ben, since his world was destroyed. Needless to say, he is welcomed with open arms.

Mary Jane then takes Peter’s old Spider-Man costume and gives it to May. With her father gone, Mayday decides to begin anew as Spider-Woman, no longer Spider-Girl. 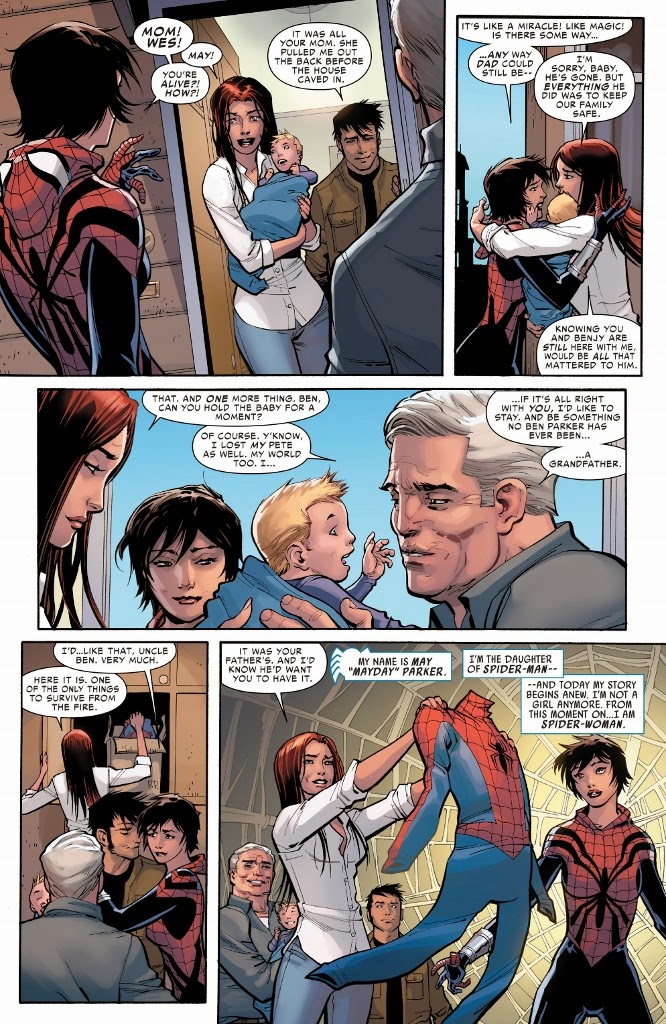 Back on Loomworld, more Spiders say their goodbyes when suddenly the last remaining spiders experience some extreme traumatizing spider sense. As it turns out, Spider-Ock, having figured out his fate, tries to cut the webs with of the Great Web with Morlun’s knife in order to change his future.

Cutting the great web results in several worlds being lost. Simultaneously, Madame Web, aka Julia Carpenter, wakes up from coma back on the 616 world, regaining her physical sight, but losing her web foresight. She last went into coma after the events of Amazing Spider-Man # 695

Peter 616 advises Spidey 2099 and Spider-Gwen to get back to their respective home-worlds before the portals to their worlds get destroyed. After much persuasion, the two do as instructed and head back to their homes. Spider-Man 2099 reassures Spider-Gwen that the good guys win in the end as he was there to witness Superior Spider-Man lose.

The remaining members from earth 616 – Spider-Man, Spider-Woman (Jess), Spider-Girl (Anya) and Silk, along with Spider-UK and Karn, proceed to stop Superior Spider-Man. When almost stabbed by Spider-Ock with the knife, Anya realizes there are words inscripted on Morlun’s knife. She tries to read it while fighting Spider-Ock. 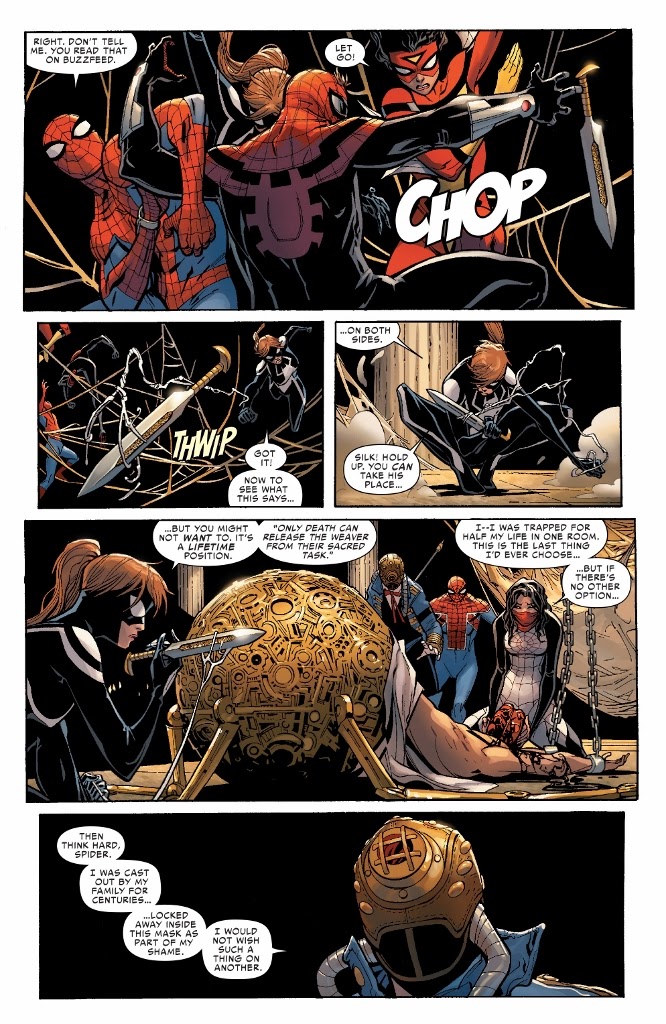 As we later find out, the inscription reads that “There will always be a Master Weaver spinning at the centre of the Web.” This leads Silk to believe that she is the one destined to fix the great web since the Inheritors constantly referred to her as the spinner of the web. Later when Superior Spider-Man loses the knife during his battle with Peter and Spider-Woman, Anya gets the chance to read the other side of the knife which reads “only death can release the weaver from their sacred task.”

Having been trapped in a room for all her life, Silk second guesses the responsibility, not wanting to be trapped for the rest of her life. Karn, having been an outcast for most his life and locked in his mask of shame, understands Silk’s concern and volunteers to be the weaver. He states that he has consumed enough Spider life force over the years to do the duty of “the Bride.” He also sees it as a way to repay the spiders for the loss he has inflicted to their kind over the years.

As it turns out Karn was indeed destined to be the Weaver as they soon discover that the dead Master Weaver was actually an older version of Karn himself. Karn then unlocks the Master Weaver’s suit which can only be unlocked with his spear which he invented as a child, further confirming that he is meant to be the Weaver.

Meanwhile over at the battle between Ock, Peter and Jess, Ock knocks Jess out of the picture, resulting in a final battle between just Ock and Peter. The two battle it out and Peter eventually gains the upper hand, despite having half his life force sucked out by Morlun not long ago. Seeing that he is about to lose, Ock instructs his hologram, Ana Maria to enter into sleep mode for 100 days as previously discussed.

Karn, now in the Master Weaver costume begins to try to fix the Great Web. He states however that it will take time, and that the spiders will lose their spider sense for a while. He also states that ock must be placed back in his proper timeline before he can send any of the others home. Ock vows revenge on Karn for sending him back to his “death.” Karn responds saying that Ock already gained his revenge by killing his older self. Ock is then sent back to Superior Spider-Man # 19 and loses all memory of what had taken place. 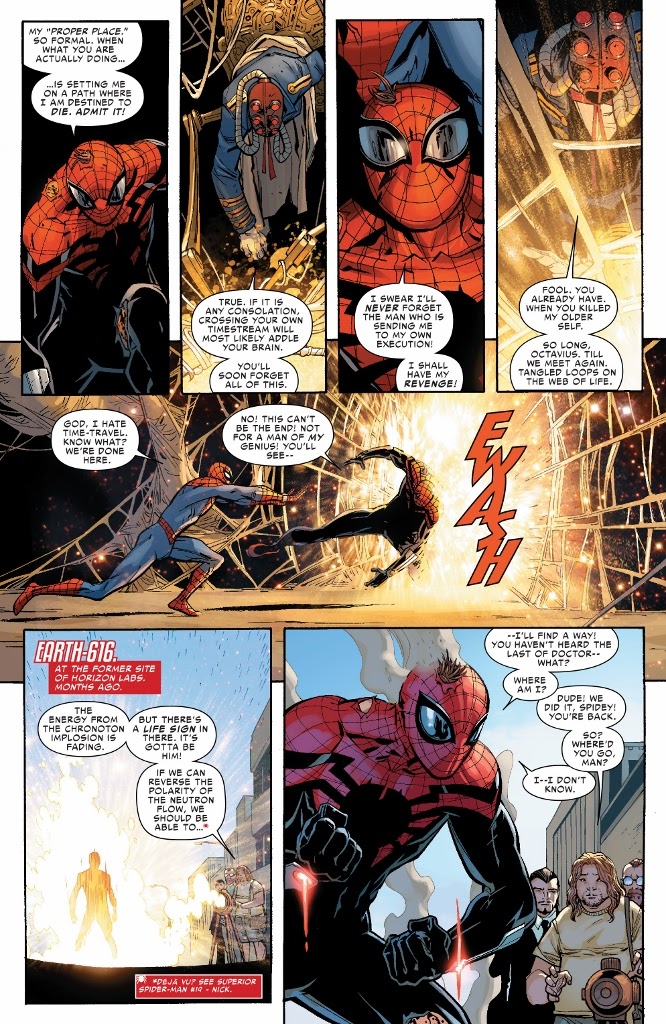 Back on Loomworld, Karn, now the Master Weaver attempts to send Spider-UK back to his world but is unable to due to the fact that his world no longer exists. Spider-UK decides to stay on Loomworld and help Karn with whatever weaving duties are needed. Anya, feeling a connection to the place with her ability to read the ancient language too decides to stay on Loomworld, believing that she could be of more use there than back home where there are Spider-Girls at every corner ( almost).

Spidey regrets that Kaine received such a demoralizing death and comments that he deserved better. Back on earth 616, Spider-Man, Silk and Spider-Woman go about their separate ways, catching up on what they had missed over the last few days. Peter decides that after leading a whole team of spiders, that he is able and ready to finally be a proper director of his company. For a moment, he second guesses if he will be able to return to stopping simple street crimes, but soon puts aside all such thoughts when he helps an old lady from a snatch thief.

In the epilogue, we see Kaine, or an arm, presumed to be Kaine’s breaking out of the body of the “Other!” 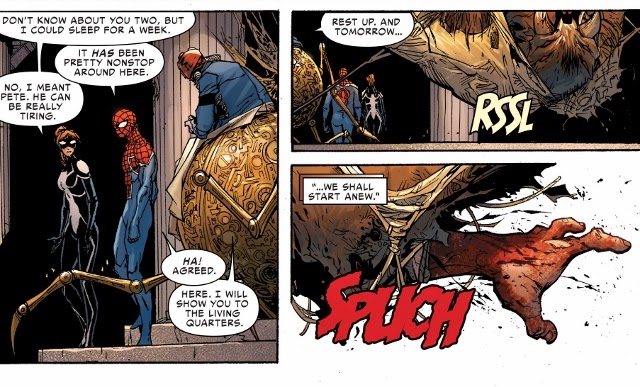 Thoughts
As a final issue and closure to the Spider-Verse series, I thought this issue did well to close most of all the loose ends left unanswered from the last issue, which was extremely rushed. Even the question of what the Inheritors would eat in their bunker was answered, though not mentioned in the review.  (Read the issue to find out)

Most of the spider people left pretty quick. I was sad to see that there was no follow up with May Parker Spider-Woman, especially since she got a fair bit of showtime throughout the series. She, like most of the others simply left too soon. We also don’t get to see any of Spider-Man Noir, who pretty much lefts the series soon after he joined it.

Superior Spider-Man destroying the Great Web and the Master Weaver turning out to be Karn himself was a decent surprise. The whole situation involving time travel and destiny reminds me a lot of last year’s movie Predestination. (Highly recommended)

As Spider-Man 2099 pointed out to Spider-Gwen, Superior Spider-Man ends up realizing that Peter is indeed the better Spider-Man and will give up the mantle in the end. However, we are now aware of a timed message Superior Spider-Man had sent to himself 100 days later. Whether or not is actions could make an impact on history or not is up for endless debate and cannot be known for certain.

One thing for sure however, much like Kaine, Dr Octopus will not remain dead for long, and whatever back up plan he set in motion with his hologram will definitely come into effect in the issues ahead. For a character that held so much importance throughout the series, Superior Spider-Man truly blew his chance to be remembered as a hero when he destroyed the Great Web. However no complaints can be made for ensuring that the Superior Spider-Man stayed true to his character.

I’m also pretty glad to see Anya find her place in the Loomworld. We never saw much of her in 616 anyways which really didn’t make sense considering the amount of crime in New York. Dumping her on Loomworld with a portal to come back and pay her bills etc back home whenever she likes is the perfect solution of what to do with her character. Likewise, Spider-UK, being such a large part of the Spider-Verse is also conveniently placed on Loomworld so we can easily see and read more stories about him in the future when the time is right.

Finally, with the disappearance of Spider-UK’s world, not related to Spider-Ock destroying the Great Web, we can be sure that the same Cosmic Phenomena will be coming for earth 616 sooner or later, resulting in another big event that would likely happen very soon. (hint: Secret wars?)