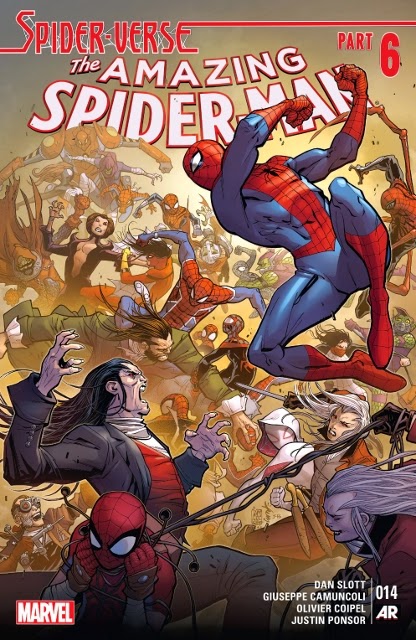 This issue begins with Silk already missing. We do not get any scenes showing how or when she got caught, but as Spider-Woman later explains, the Inheritors took her to the great hall to be sacrificed.

The Spider-Men port right in the centre of the battle just as Spider-Gwen is being attacked by Lady Verna’s Goblins. Peter (616) instinctively wants to get Gwen out of the way to safety, but this Gwen insists that she handle the situation herself. Needless to say, Gwen does take care of herself and thanks Peter for trusting her.

We next see Daemos, lost without his Father, Lord Solus, whom Kaine killed. Jennix however passes Daemos a crystal containing their father’s life force. If they ever recreate the cloning facility, they would be able to bring their father back to life.

Morlun proceeds with the ritual while the other Inheritors stop the hordes of Spider-Men coming their way, including Miles’ group of Web Warriors. Ultimate Jessica Drew also arrives with them. (Last seen at the cloning facility by herself) and finds a torn piece of Kaine’s suit. 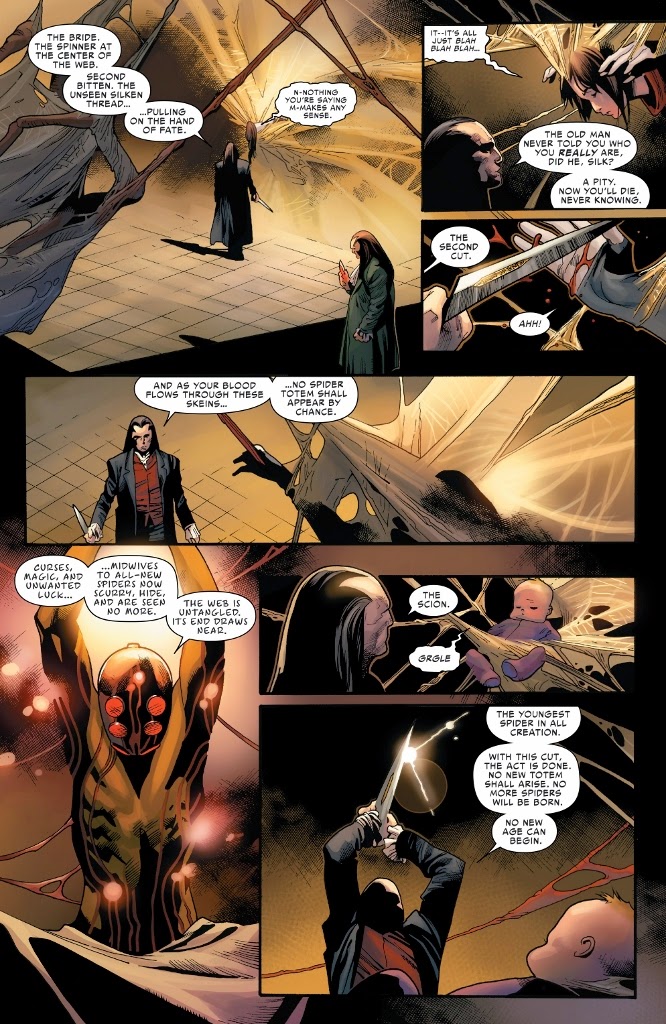 Morlun successfully performs the ritual (of just taking some blood) on Kaine and Silk. He is about to do so with Baby Benjy when he is stopped by 616 Spider-Man and Spider-Ock. Spider-Uncle Ben, jumps into the great Web and teleports away from the battle. Spidey fights Morlun, taunting him, while Ock battles it out with Daemos and is soon assisted by Mayday Parker. May is still thirsty for revenge and wants to kill Daemos.

Morlun eventually rids himself of Parker and tries to perform the ritual on baby Ben, only to find that Uncle Ben Spidey had switched Baby Ben with a naked Spider-Ham, and had taken Baby Ben to safety.

Spider-Ham and Morlun fight for a while till Peter gets back on his feet and calls in more reinforcements – Spider-Man 2099, Lady Spider and Leopardon!

Over at the battle between Spider-Girl and Daemos, May manages to steal Lord Solu’s life force from Daemos and is about to crush it. Morlun taunts Peter saying that he will eventually find Baby Ben and sacrifice him anyway. Upon hearing this, Ock decides to kill the Master Weaver, thus ending the Inheritors ability to teleport. This comes as a shock to everyone. Peter rebukes Ock saying that they are heroes, and heroes do not kill.
Upon hearing this, Mayday pauses for a moment and sees Daemos on his knees begging for his father’s life. She then tells herself that she is Mayday Parker, daughter of Spider-Man and decides not to take vengeance. 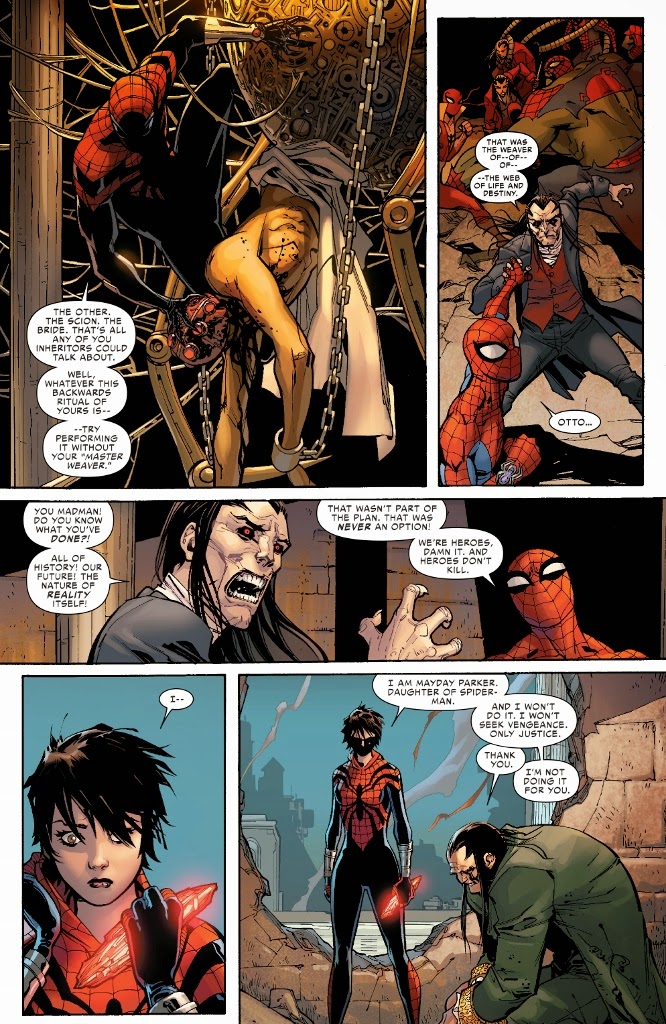 By now, Morlun is furious and begins sucking the life force out of Parker. The other Spiders try to help but Parker signals to them to stay put. While having his life force sucked out, Peter teleports both himself and Morlun to earth-3145, the world filled with radiation poisoning. Morlun begins to choke and Peter tells him to head to the bunker and never come out if he wants to live.

All the other Inheritors are then somehow captured and thrown into earth – 3145 as well. Daemos, has suddenly become a timid dog, not wanting to attack and is confused at the Spider’s kindness in showing them mercy despite the evil they have done.

The scene ends with Peter being held in Silk’s arms, both still attracted to one another, but satisfied with just holding hands.

Thoughts
As anyone reading this last issue would be thinking. This issue is way too rushed. So much so that part of the story just doesn’t make sense any more. There were some pretty good parts to this issue which will later be highlighted, but for the most part, there is no way the war could have ended that fast, especially not against such powerful enemies.

For starters, how were the Inheritors, the powerful beings who could destroy anything that stood in their path, subdued by webbings at the end? Surely they could all easily break out and suck the life force from several Spider-Men at least.

It could be argued that Karn, and Leopardon may have turned the tables of the battle, but still, it doesn’t quite add up. Also, Daemos’ character somehow takes a 180 degree turn following the death of his father. It was not even hinted once that Daemos shared such love for his father. It was even foretold that he would outlive his father. I’m not entirely sure what the big deal here was that caused Daemos to act like a puppy all of the sudden. 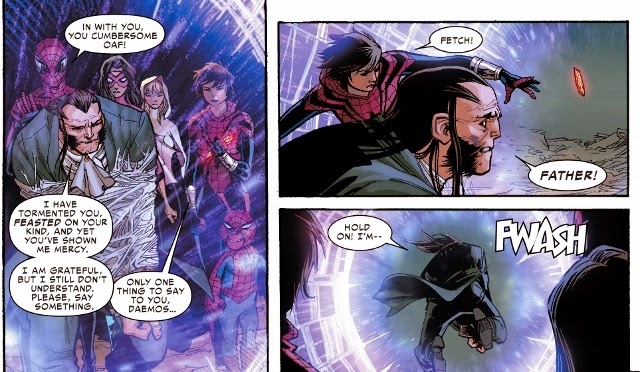 Also, why is it that Morlun did not just kill Silk when he performed the ritual, but instead took some blood from her palm! Didn’t this guy watch Pirates of the Caribbean?? Strangely however, when it came to baby Ben, he looks as though he was about to kill him! Why? Surely Silk poses more a threat than Baby Ben. He should have killer her and tried to take some blood from the baby’s palm instead. Wrong move Morlun.

Unfortuantely, we do not get to see any of Leopardon or Karn in action in this issue. All that effort by Spider-Man 2099 to get some radiation into Leopardon and we don’t even see it being used. Perhaps their point of view in the battle will be highlighted a little more in some other tie-ins.

Some of the better things in this issue included seeing Spider-Gwen kick the Goblin’s ass without help, Mayday Parker not crushing Lord Solus’ life force (though I would not have considered that murder) and reminding herself that she is the daughter of Spider-Man, seeing Spider-Ham tell Mayday that her dad would be proud of her if he was anything like him and strangely, I quite enjoyed the moment shared between Silk and Spider-Man at the end.

As for the element of surprise, I must say that this issue had a fair amount of it. Firstly, there was no way I saw the death of the Master Weaver as a possibility. Spider-Ock’s logic is undeniable. Killing the Master Weaver would mean the end of the Inheritor’s transportation from world to world. However, if Jennix is smart enough to perfect a cloning facility, I’m quite sure he would be able to make a teleportation device as well. Regardless, this act threw everyone off, especially Morlun.

The other thing that I did not expect was the switching of Baby Ben and Spider-Ham. There was 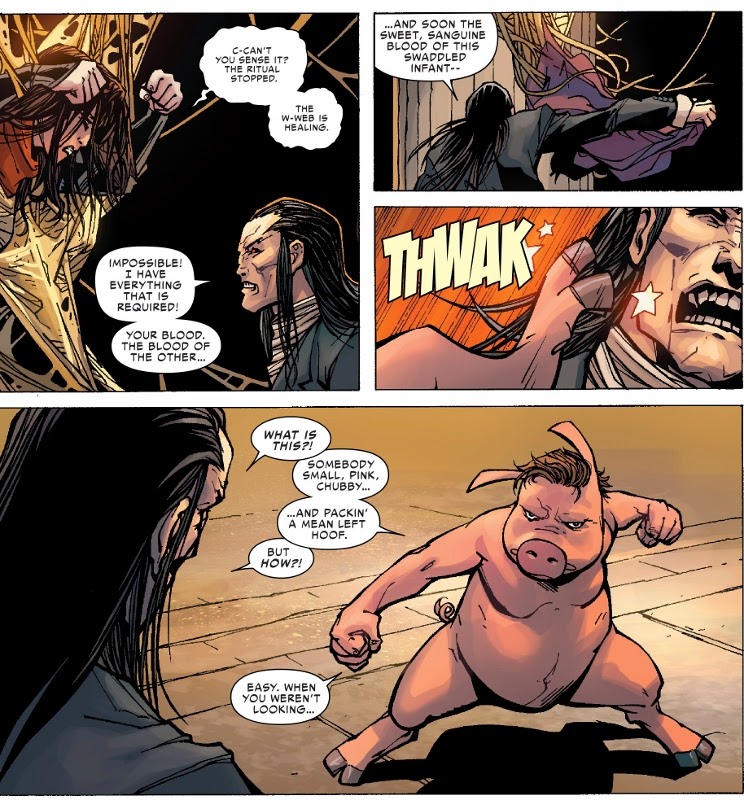 absolutely no inkling that the switch was taking place when Uncle Ben ran away from the battle. Considering the fact that he did not want to come to fight the Inheritors in the first place, him running away did not seem like and unbelievable act.


With the Inheritors currently occupying his old home, aka the bunker, Uncle Ben will have to find a new world to live in. Somehow I doubt he will be coming to earth 616. In my opinion, his best option is to stay with Mayday and help raise little Ben with the values that Peter once learned, causing Baby Ben to grow up and become the same hero his father was.

The next issue will be the epilogue to the Spider-Verse, where we will probably see a much awaited conversation between Otto and Peter. As it is, in this issue, there is a panel where Ock is already devising a plan at the mention of going home by some of the other Spider-Men. I am also curious to find out what exactly became of Kaine when the Other was killed. Is this really the last we will see of the Scarlet Spider? We also know that Spider-Verse will tie in to Marvel’s newer event – Secret Wars, so it will not be the last we see of these new characters.

Overall, a really average issue though. It was a little too rushed and just didn’t make sense. Then again, its comics people!