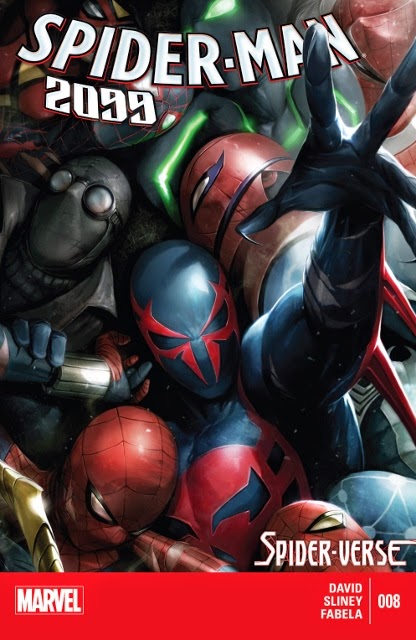 Fortunately enough, the contents of this issue are not already spoiled in Amazing Spider-Man # 13 much like Spider-Woman # 3 and Scarlet Spiders # 3.

We last saw Spider-Man 2099 and Lady  Spider landing at the safe zone, only to find that it is not so safe anymore. Lady Spider goes into a slight depression, thinking that everyone had been killed. Moments later however, Miguel spots an anomaly that turns out to be the remains of the giant robot – Leopardon ( Last seen in Amazing Spider-Man # 12)

Miguel has the idea to fix the robot, but needs a lab big enough to fit all the giant robot parts. Lady Spider says she knows of a place, which we later find out belongs to Harold Osborn’s father. Harold agrees to let Lady Spider use the lab on the condition that May go out to dinner with him. ( He does not know that they are one and the same).

Harold’s father however, much like Harry's (616 universe), father is none other than the Green Goblin! Naturally Mr Osborn agrees as soon as he hears that Lady Spider wishes to use the facility.

Spider-Man 2099 and Lady Spider teleport the robot to the facility piece by piece. After a little experimenting, they almost manage to get the robot live. Spidey 2099 however has the idea of adding radiation to the robot, seeing that through their autopsy, they found out that radiation is the Inheritors’ weakness. 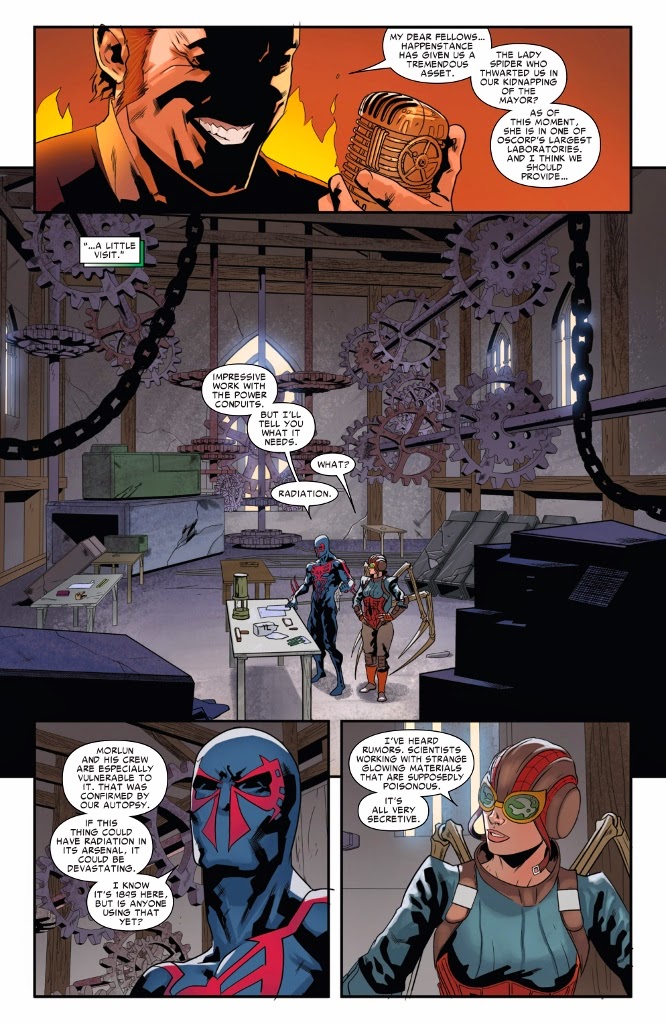 Unfortunately radiation is only just being discovered in that timeline. Before they can come up with a conclusion, Harold walks into the room, unknowingly followed  by the Six men of Sinestry.

Some pretty cool fight scenes take place including Leopardon coming to life briefly, though in parts, and Spider-Man 2099 slicing the Goblin’s throat and tricking him into believing that he would soon bleed to death. 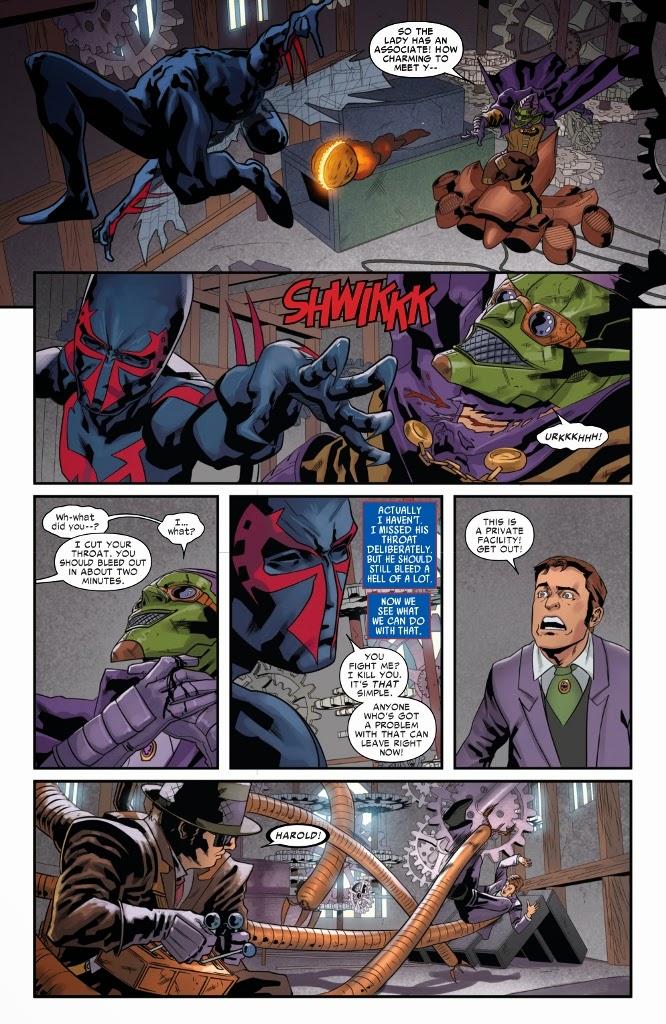 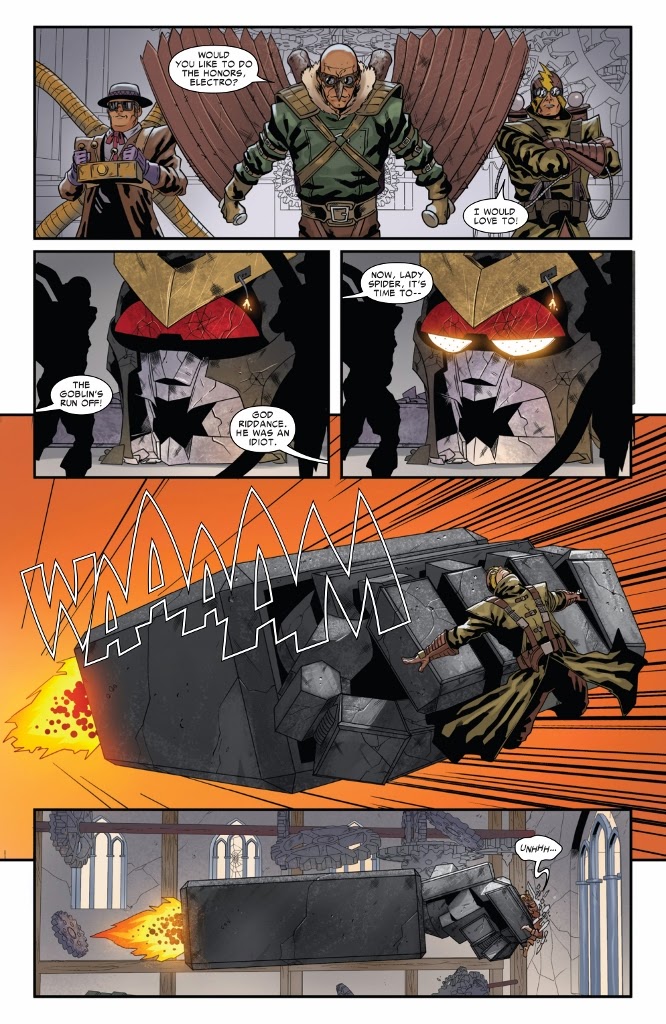 More notably however, when Dr Octopus is knocked out, Spider-Man 2099 realizes he can use Ock’s radioactive power center for his arms to bring Leopardon to life. Once fixed, Leopardon, Spider-Man 2099 and Lady Spider travel to help their friends out on Loomworld.

In the epilogue, Harold wakes up and goes to see his father. Unfortunately, he sees his father in the gobbling costume, leaving his father no choice but to shoot Harold.

Thoughts
If you are wondering how Spider-Man 2099 would know where the others are, or that they are evens still alive, there was a scene I skipped, which was pretty much a repeat from Amazing Spider-Man # 13, where Peter Parker Spider-Man makes a call to Miguel asking him for his assistance to battle it out on Loomworld. The conversation did not exactly happen as it did in Amazing, but the general idea is there.

I was pretty glad that this issue was not simply a rehash of what happened in the other tie-in books, which is how it is supposed to be. The slight romantic development between Harold and May was also pretty cute. Unfortunately for her, that dinner date she has with Harold is never going to happen, unless of course Harold survives the gunshot.

The return of Leopardon was a pleasant surprise that was not at all expected. When I read Amazing Spider-Man # 13, I wondered what it was that Miguel was up to that was so important. In this book, we learn not only what they were up to, but what they learnt from the autopsy, which was kept secret from the reader.

Though the fact that radiation affects the Inheritors is not news at all since we all knew that from the very beginning, it was neat to see that at least one of the Spider-Men decided to use it against the Inheritors. I would say it was a clever move, but really, this should have been done long ago by Peter Parker (616) since he knew of this weakness long before any autopsy, or any radiation infected world was discovered.

From the scenes in the comic, it appeared as though the Goblin was not aware that his son had also come into the facility. He had no intention of revealing himself to his son, and certainly not to kill him. I do have some suspicions however that Harold may not actually be dead but is probably knocked out cold and will be given some serum to turn him into a hobgoblin of some sort, thus making Lady Spider’s romantic life more complicated. 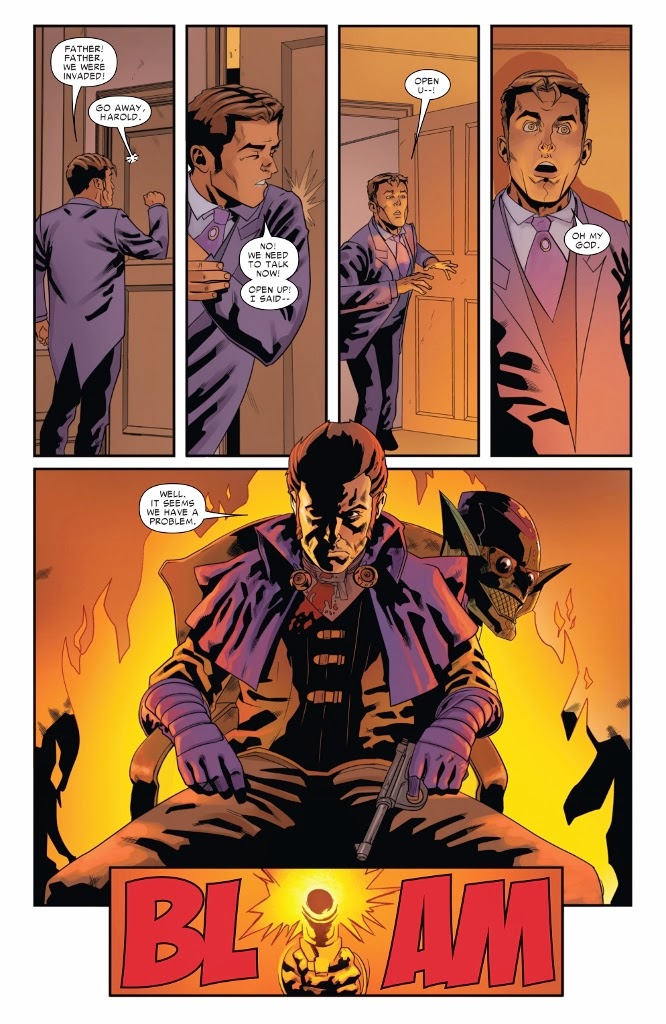