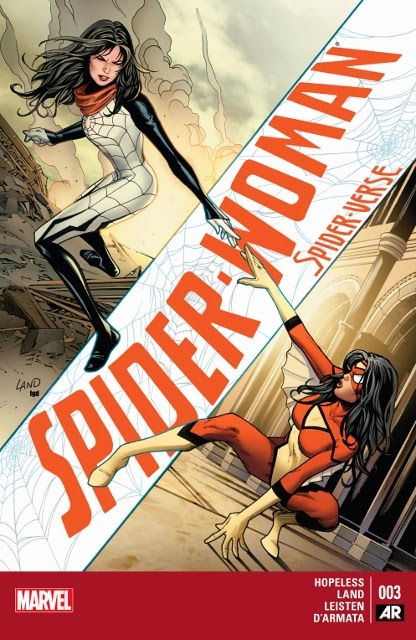 Being a book that not only focuses on Jessica Drew, but on Silk and Spider Gwen as well, this book should really have been named Spider-Women or Spider-Girls instead of Spider-Woman.

We first see Silk, landing in earth-3145 after being chased by the Inheritor twins. As we have seen many times already in other issues, she suits up in a Websmat Suit (Self Webbed Hazmat Suit) in search for a bunker of this world, similar to the bunker she was trapped in for years. After lots of walking, she eventually manages to find the bunker and unlocks it with the same code used for her own bunker.

Over on Loomworld, Jessica, whom we last saw taking the identity of Jessica Drew of that world and finding out that her doppelganger is Morlun's sex slave, is having a hard time covering her identity, pretending to be her other self. She uses her pheromone powers to blind Morlun a little as she had done with the pirate in the last issue. Morlun however begins to question her queer behavior of speaking and acting funny, not eating her shrimp and not wanting to ballroom dance. Jess eventually gives the excuse of having a bad tummy for her ill behaviour and Morlun buys it. Jessica takes her toilet break as an opportunity to escape and find a way out of her mess. 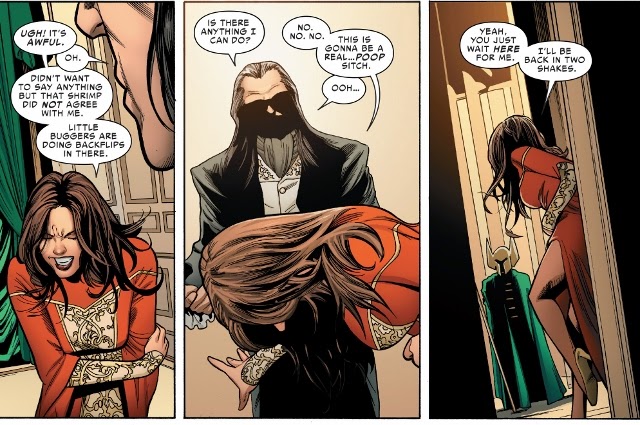 Jessica, on Loomworld, knocks out the great hall guard- Mary Jane, and climbs into an air vent when she gets the call from Peter that we saw in ASM # 12. While crawling through the vent she is forced to tear her skirt (totally unnecessary), falls through the vent and ends up next to the Master Weaver.


The Master Weaver very quickly convinces her that he is the one who orchestrated the convenience of having another Jessica Drew as Morlun’s pet to hide her cover. He reveals his slight rebellion against the Inheritors and gives her scrolls containing the keys to defeating the Inheritors. (All old news for those who have read the rest of the Spider-Verse stories) He then urges Spider-Woman to get back to her friends and pass them the scrolls containing information about the Scion, Bride, the Other and the Prodigal Son. Jess, not having any arguments there, tries to walk through the “great web” like how the Inheritors do, but is stopped abruptly by the Master Weaver who warns that her travel will not go unnoticed by the Inheritors.

It is at this point that Morlun walks into the room, as seen in Amazing Spider-Man #12. With not enough power in her teleporting device, Jessica teleports the scrolls to Spider-Man. Stuck on Loomworld with no way to get out, Jessica decides to hide until the war is over. More specifically, she chooses the ship whose captain she became quite friendly with, to be her hiding place. To her surprise, she is blasted by cannons and taken hostage by the new Captain of the ship – the Jessica Drew of Loomworld whom our Jessica last knocked out and put in a chest to be sent out to sea for a few days.

Just then, Spider-Gwen and Silk come to the rescue via a portal and prepare to fight the pirates (As we see in AmazingSpider-Man # 13)

Thoughts
My first problem with this issue is that almost everything covered in this issue was already told in either Amazing Spider-Man# 12 or #13. It would probably have been a decent issue if it came out before Amazing Spider-Man # 13 at least. Since it was all released at the same time however, most of the story was spoiled for me since I read ASM # 13 first.

In this issue however, we see some hints to what the second scroll is about, namely, the Prodigal Son. Spider-Verse Team up # 3 will tackle this part of the prophecy with a special team sent out specifically to find the prodigal son.

As in the first two issues, Spider-Woman stumbled around Loomworld making almost no effort to play the part of her other self. Nevertheless she somehow manages not to be noticed by anyone else, save Morlun, but even he is easily fooled. The reveal of the Master Weaver was not at all exciting as this part of the story was already told in the other book.

Overall this issue was not too necessary to the whole Spider-Verse story. It fills in a few blank spaces. Unfortunately, almost none are too critical to the storyline. Perhaps the best reveal in this whole issue was how Spider-Gwen, Silk and Spider-Woman ended up fighting pirates as seen in ASM # 13. Everything else was pretty much a repeat. As such it is probably very important that the reader read all the tie-ins before reading the main story in Amazing Spider-Man.

I did however enjoy seeing Loomworld’s Jessica get out of the treasure chest somehow and taking over the ship. Her short conversation with our Spider-Woman clarifies that she did not actually enjoy being Morlun’s concubine and much rather be Captain of the ship! At least there is some similarity between the two Jessicas’.

The unnecessary, but pretty cool appearance of Mary Jane from Loomworld was also pretty neat, though she was absolutely horrible as a guard.