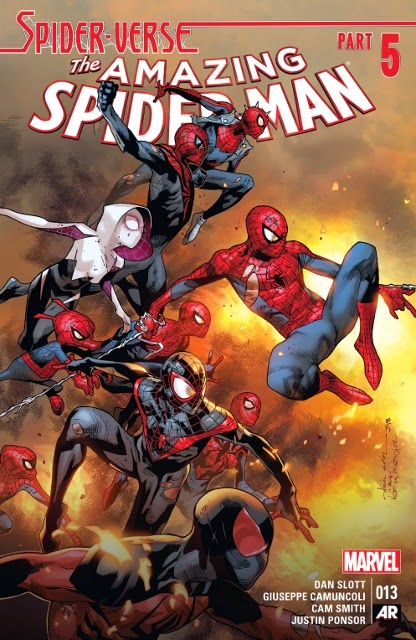 This issue begins with most of the inheritor siblings begging for forgiveness from their Father, Lord Solus. If you have no idea what is going on here, you are not alone. The twins lost Silk, which we saw in Spider-Woman # 2, Jennix lost his cloning facility, which happened in Scarlet Spiders # 3 ( yet to be reviewed), Daemos, whom I last saw back from the dead trying to kill Spider-Man 2099, also seems to be on his knees, so it is safe to say he too failed, and finally, Lady Verna is also on her knees, about to explain her failings when she is interrupted by Lord Solus.

Lord Solus explains how their failures are insignificant. They now have the Scion in hand ( Baby Ben), and as the prophecy is foretold, the Bride and the Other will come to them eventually.

Meanwhile, on the nuclear blasted world, aka earth -3145, the Spider-Men are in the bunker where a version of Uncle Ben has been hiding. As it turns out, this Uncle Ben was Spider-Man for a while until his actions resulted in the death of his nephew Peter, and his Wife, May. He was eventually approached by Ezekiel who told him of Morlun’s existence and advised him to hide in the bunker, to which Uncle Ben agreed to without hesitation.

Uncle Ben also explains that the world was destroyed due to the miscalculation of a mad man named Dr Octavius. Naturally, Spider-Ock is in disbelief upon hearing this. 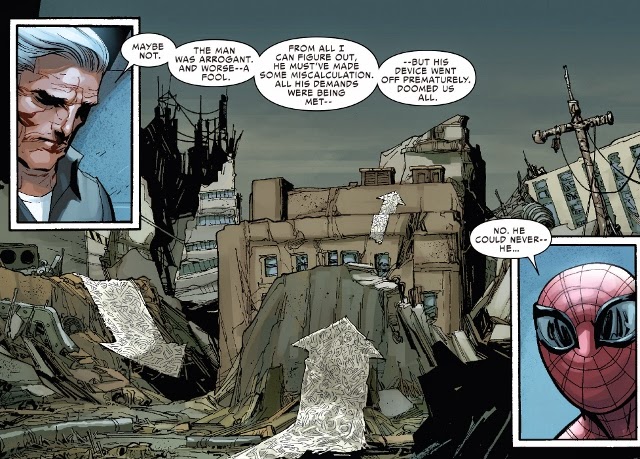 Silk, noticing Spider-Woman is missing, asks what happened to her. Spider-Man (616) explains how she sacrificed her chance to get out of the Loomworld to send those scrolls. The spiders then try to decipher the code in the scrolls while Silk walks away slowly from the rest. Spider-Gwen however notices her slipping away and goes to check up on her. After a little poking around, Silk confesses that she plans to go to Loomworld to help Jessica. Spider-Gwen decides she will go to accompany her.

Over at a corner in the bunker, Spider-Man India s feeling a little down. Spider-UK goes over to have a little chat with him. He finds out that Pavitr Prabhakar is feeling a little expendable, thinking he is just a shadow of the real Peter Parker with his life having so many similarity to Peter’s. Spider-UK assures him that he is unique and encourages him to think that Peter might actually be the shadow of him. Though a completely pointless scene, it does make the comic seem a little more real, as I would probably feel the same way if I was in a bunker with a bunch of other guys similar to myself. 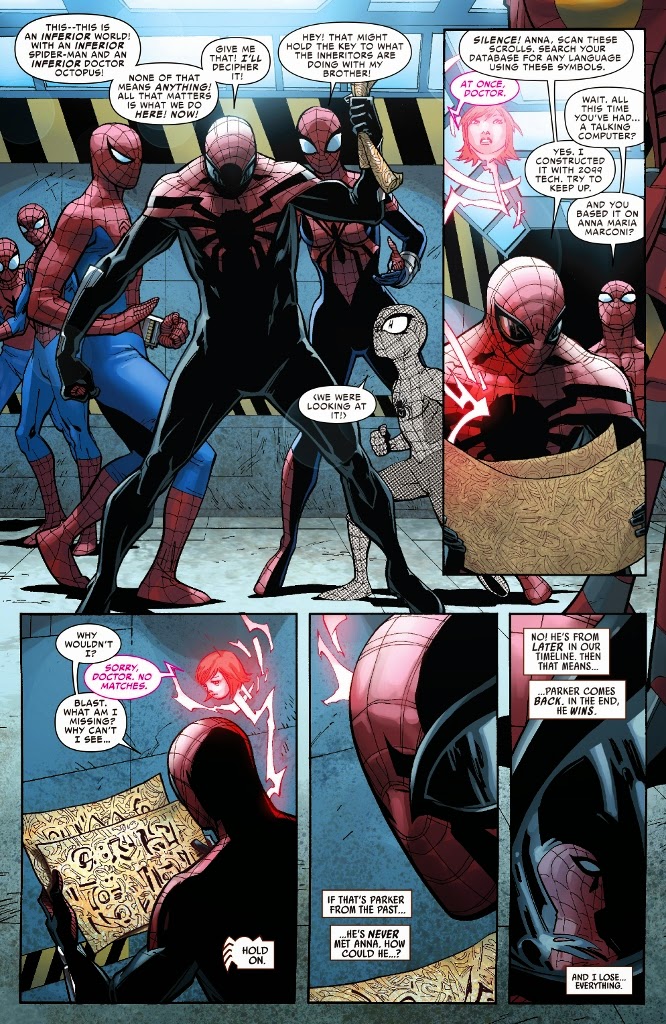 Over at the scroll reading section, Superior Spider-Man has had enough of the incompetence of this world and its inferior Spider-Man ( Uncle Ben) and its Inferior Dr Octopus, who blew up the world. He grabs the scrolls and gets his virtual computer- Ana Marconi to read them through. Unfortunately, Ana is also unable to read it. Seeing a computer version of Ana takes 616 Spider-Man by surprise and he questions why Spider-Ock had a Virtual Computer based on Ana Marconi. At first Ock thinks it a silly question, but soon realizes that 616 Spider-Man is not from his past, but is actually from his future, meaning that Peter Parker would eventually beat him again in the end. As Ock thinks about this, Anya Corazon takes the scrolls saying that she can read them. Ock is in disbelief that someone else is able to decipher the code when he was not able to.

As she reads the prophecy, she explains how the Spiders are destined to end the Inheritors reign,.. a thousand years from now. The only way to prevent this is to wipe out all the Spider Totems. In order to do this, a ritual must be performed involving the Scion, the Bride and The Other.

At first, Peter is not at all alarmed since Cindy is right there with them. Soon after saying that however he realizes that she has gone missing. The scene changes to Cindy, Gwen and Jessica, all fighting some pirate bad guys. Peter calls in right in the middle of the fight but before she can explain herself, her teleporter and communicator breaks in a fight that should have cut her hand off.

Next, Peter tries to get through to Kaine, but over on Earth – 802, we get the spoiler version of what happened at the cloning facility. Ben Reilly sacrificed himself to destroy the place which enrages Kaine who is now turning into the Other and is about to go to Loomworld to kill all the inheritors.

With no other choice, Peter decides to gather all their troops from across the multiverse and head to Loomworld for their final battle. Spider-Man 2099 and Lady Spider ask for another 5 minutes as they are working on a little something, and Miles and his “Web Warriors” team are also on the way. Black Widow Jessica however is stuck at the cloning facility as Kaine took their teleporter. 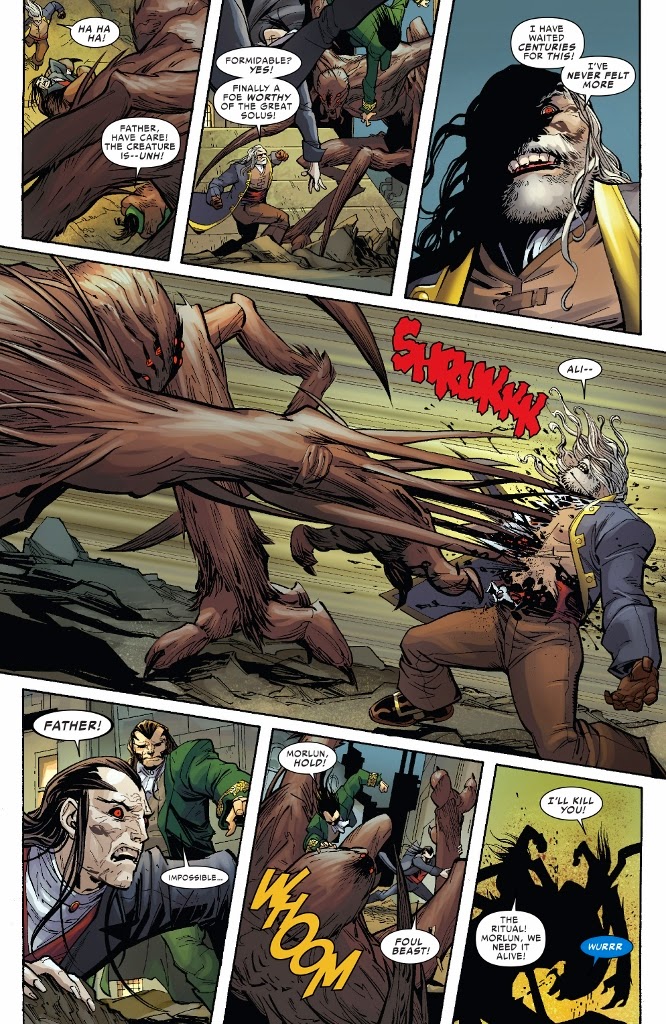 Kaine, over at the Loomworld has now transformed into a giant beast, alarming the Inheritors. Lord Solus however is glad to finally meet a foe worthy of battle. However, the Other easily kills Lord Solus while he is still talking, further alarming the rest of the inheritors. Furious, Morlun kills the Other, with its own stingers.

Daemos tries to remind Morlun that they need the Other alive for the ritual to which Morlun replies that they only need its blood. Daemos, still shocked questions the meaning of their Father’s death. Morlun however fueled with rage can’t be bothered to its meaning, and instructs Daemos to bring the body of the other to the Great Hall.

Elsewhere, also on Loomworld, the spider girls, presumably having escaped the pirate mess they were previously in, find themselves try to figure out a way to get off this world. Before they can devise a plan however, they are attacked by the Inheritor twins, and Lady Verna, who has come with new pets – Goblins!

Just as all the Spiders are about to leave, Uncle Ben speaks up saying that he can’t go with them. Peter tries to talk his Uncle into changing his mind but fails miserably. Superior Spider-Man however, having lost a million times to Peter in his past life as Doc Ock knows what it is like to fail. As such, he talks Uncle Ben into changing his mind, reminding Uncle Ben that it is not his spider powers that make him strong, but his will power to get back up. He also tells Uncle Ben that it doesn’t matter how many times he fails, so long as he wins just once! Uncle Ben agrees to wear his suit, which he lied about throwing away, one more time for a final victory. 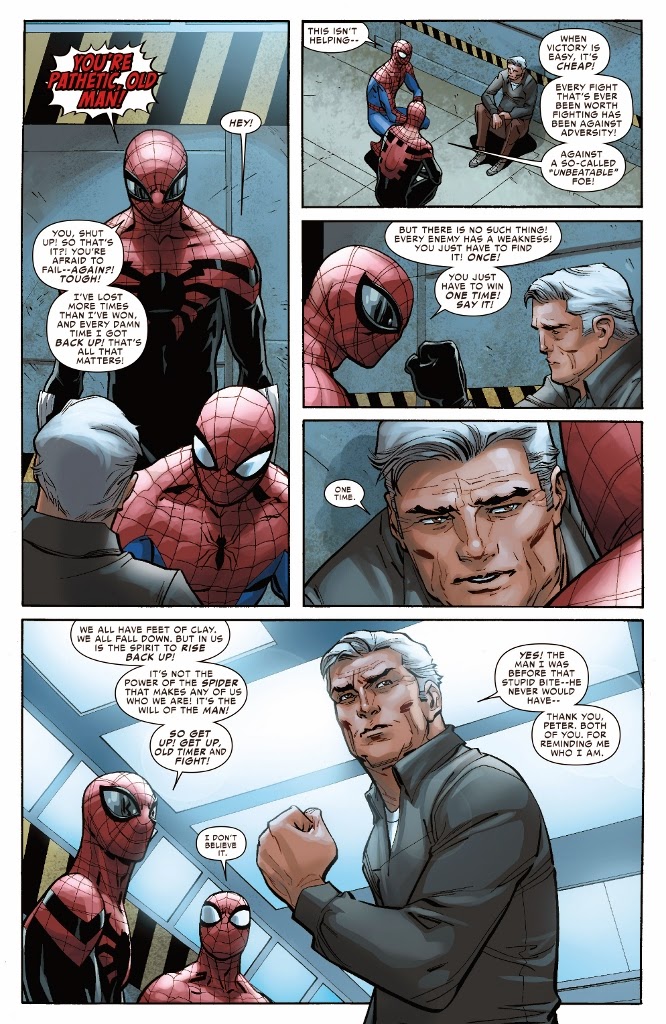 In the end, all the spiders head to Loomworld, except for Anya and a small team, who are leading a side mission based on some information from the second scroll ( which we know nothing about) that could help turn the tables in their war against the inheritors. This story will be continued in Spider-Verse team up # 3.

Thoughts
This little speech was clearly a reflection of what he was feeling, knowing that Peter would eventually rise and defeat him once again. Ock just dwells on his present victory however, knowing that at least he had finally beat Peter once, making his victory much more glorious. Having said this, I highly doubt Ock is going to be satisfied with this single victory and has probably already begun to plan his comeback.

The intermittent complaints from May Parker, continuously rambling about how they should get to Loomworld and save her little brother gets a little tiresome after a while. I’m not entirely sure what direction she is headed to in the future.

Seeing Kaine kill Lord Solus without any hesitation or effort for that matter was ecstatic. For a moment I was afraid Kaine was going to die as soon as he arrived at the hands of Lord Solus, much like Captain Universe did. Fueled with rage beyond measure following Ben’s death however, not even the great Lord Solus could stand in his way. It doesn't quite make sense exactly though since, Lord Solus killed Captain Universe, who was the embodiment of the enigma force, but died to the Other, way too fast. Does this mean that the Other is more powerful that Captain Universe? I highly doubt it. I suppose the relationship between the three is a little like Rock, Paper, Scissors. One can beat the other, but will still lose to another.

Being a typical growling brainless beast however, The Other failed to see Morlun sneak up from behind, tear out one of his stingers and pierce his own head with it… ironic really. So much for that. Is Kaine dead for good, or just his alter Other? We’ll just have to wait and see, but I highly doubt the human part of Kaine is really dead.

We also see Morlun stepping up to fill his father’s shoes whose death left all the Inheritor’s lost. Even Daemos looks to Morlun for advice on their next move.

Silk, once again, with all good intentions, manages to put all the spiders at risk and annoy Spider-Woman again. It seems that she has her own version of Parker Luck continuously breaking teleporting devices and making wrong decisions. Honestly however, Silk has got to change her hand to sword combat skills. I mean seriously, who blocks a sword coming at them with their wrist besides Wonder Woman? As mentioned earlier, this blow should have really taken Silk's hand off along with the teleporting device.

Nonetheless, the dialog between Spider-Woman and Silk is always enjoyable.

Having not yet read the side stories, this issue, unlike the last, really leaves plenty of unanswered questions about what happened, which we will have to read about in the miniseries. This is extremely different from the last issue which pretty much retold all the stories from the miniseries in the main book.

My final thought for this issue is that Peter Parker really needs to work on some better “Big Lines,“ and even Spider-Ham knows it..