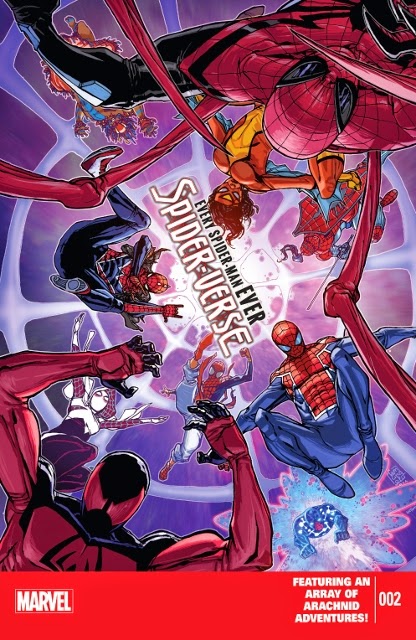 Spider-Verse # 2 review
As with the first issue of “Spider-Verse,” this comic adds pretty much nothing noteworthy to the who Spider-Verse plotline as a whole and only features short stories about different Spider-Men.

Story 1: It’s Showtime
This one page story takes place in what looks like the old Marvel vs Capcom PlayStation one game, which in this issue is referred to as earth-30847. Spider-Man uses his classic “Web Ball, Spider-Sting, and Maximum Spider moves on Morlun, who in turn kills Spider-Man with a single punch. – The End

Story 2: Anansi – A spider in sheep’s clothing.
This story follows Kwaku Anansi of earth- 7082. He is paid a visit by Spider-UK, who tries to recruit him. Anansi only agrees to join their cause if Spider-UK dresses up in a sheep costume and pretends to be a sheep that he had earlier lost. Among other things, this story features a giant tree called Mr Mighty, who is upset that Anasi has lost the sheep, a giant furious Tornado who has been awoken and some talking animals. You really miss nothing my not reading this story. 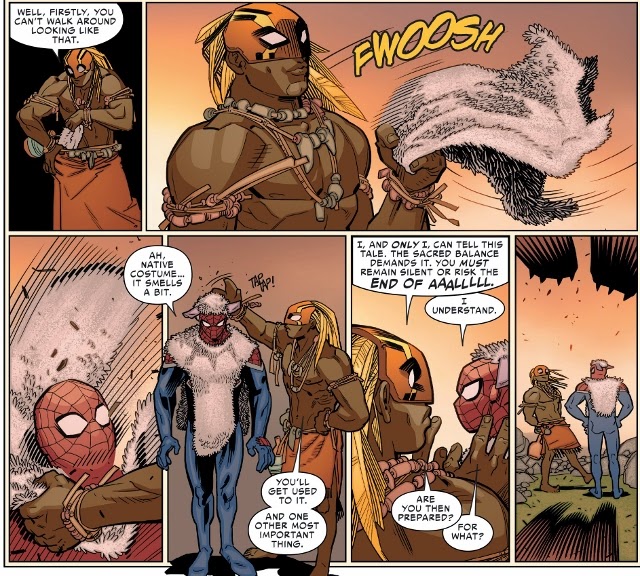 Story 3: With great power comes no future
The Anarchic Spider-Man
This is a short story about Spider-Punk, aka Hobbie Brown, a guy from the squatters who was bitten by a radioactive spider that resulted from too much illegal waste dumping. The story is shallow featuring President Osborn and his army of Venom cops, who are partially beaten by 15000 watts of punk rock. After a little fighting, America breaks free from their president. In the epilogue, a Spider-Man, most likely Spider-Ock, watches Spider-Punk in amusement. 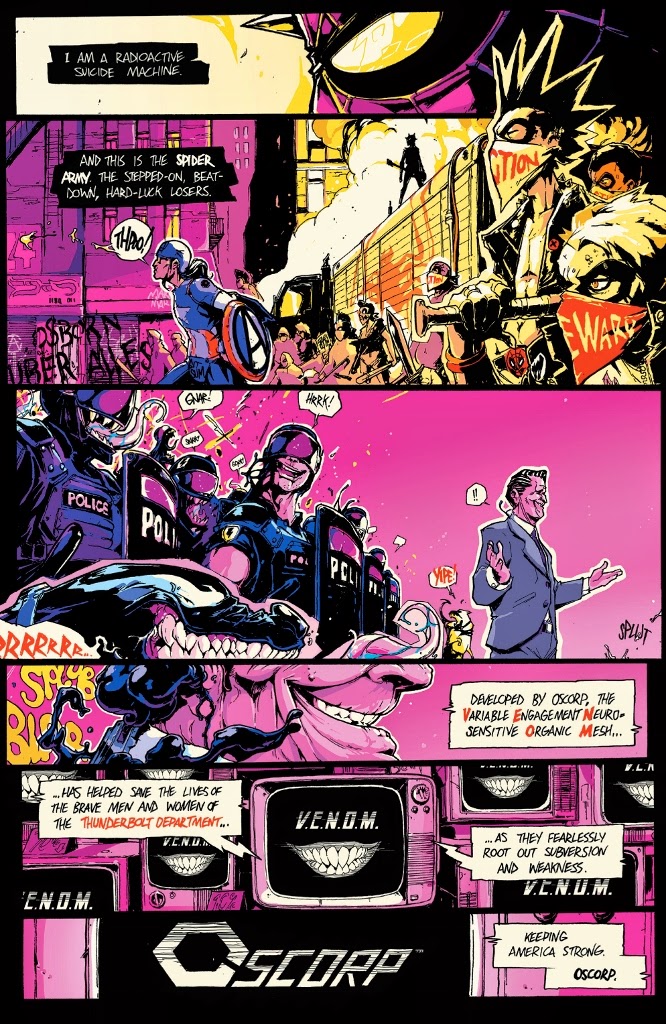 Story 4: El Espiritu de las Calles or The Spirit of the Streets
This is a story about a Mexican Spider-Man whose father was a wrestler who died in a match when his partner, the Scorpion did not come to his aid. Spider-Man, wearing a fuller version of his father’s wrestling costume now goes around stopping crime and is presumably known as the spirit of the streets. 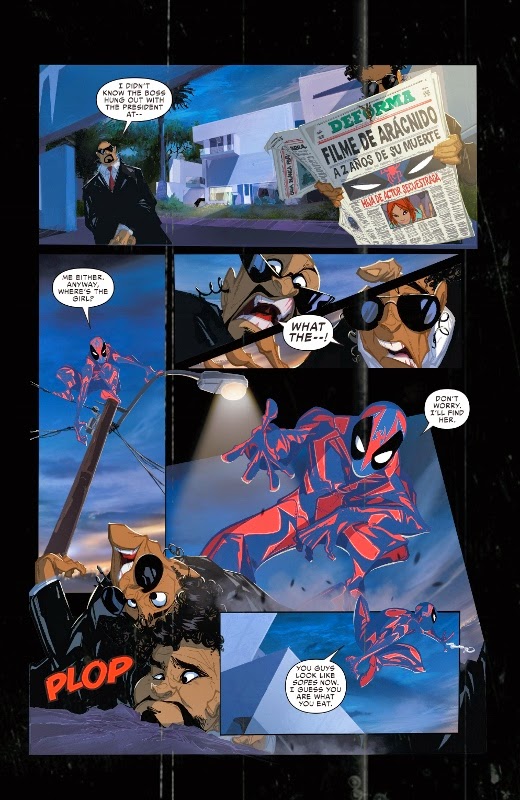 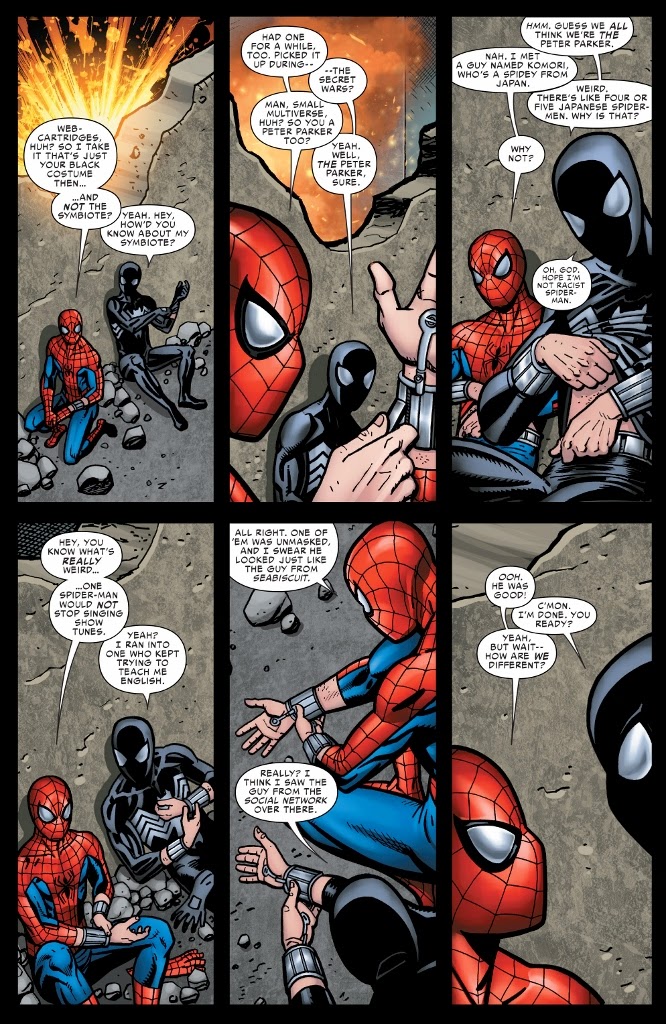 Story 5: It’s the little things
This story jumps forward to the final battle on Loomworld against the Inheritors (Spoiler much). In the midst of battle, two Spider-Men, one in the traditional suit and the other in a black costume, run out of web fluid. Together, they find cover and reload their web cartridges. In conversation, they make references to the strange kinds of Spider-Men they’ve been meeting including Spider-Man Turn off the dark musical guy, Electric Company Spider-Man who teaches English, Tobey Maguire, and Andrew Garfield. After reloading, they jump right back into battle.

Thoughts
These stories were fun, but far too shallow. There was not even one main story in the whole issue. We were simply introduced to more Spider-Men, most of whom we could not care about. It was cool to see some references to live action Spider-Men, though this was all predicted to happen much earlier anyway.

Spider-Punk’s story was not at all of any interest to me. Perhaps the Mexican Spider-Man was probably the coolest, having a totally new outfit. We do not get any backstory as to how he got his powers, though it is quite safe to say he was bitten by a spider.

With so many Spider-Men however, these little stories about random Spider guys is getting a little old, and the back stories seem to be getting worst, particularly for Spider-Punk who was bitten by a spider whose radiation came from a toxic dump.

Not at all a recommended book for anyone wanting to just follow the Spider-Verse storyline. Artwork in the comic was pretty good however, especially for the last two stories. Other than that, it is safe to say this issue can be skipped.