This issues follows Spider-Man 2099, and Lady-Spider, whom we last saw trapping Daemos’ in an electric field. In this issue, Daemos is seen trying to break loose. Spider-Man 2099 however assures him that he will die before he will be able to break loose, which is exactly what happens later in the issue.

Next, Spider-Man 2099 threatens Tyler Stone to clear the lab so he can experiment on Daemos’ old body. Tyler, after a little persuasion, agrees. 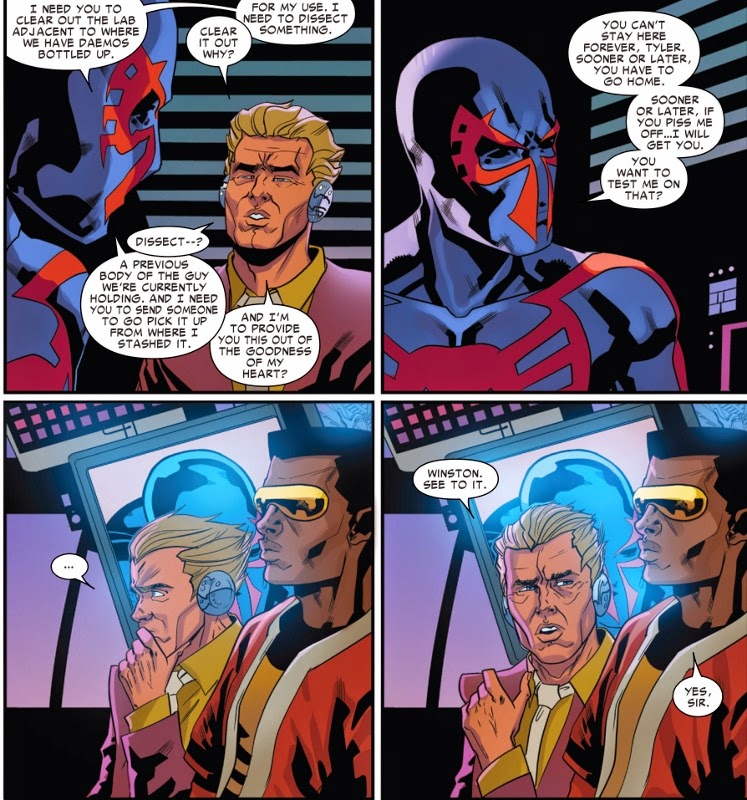 Though in Amazing Spider-Man v3 # 12, we see that Spider-Man 2099 had figured out a little something about the inheritor’s DNA, we don’t see any mention of any findings resulting from their autopsy in this issue.

In this issue, we see Spidey 2099, passing to Lady-Spider his arm teleporter, whom he got from the other version of himself from earth – 96099. ( see Spider-Man 2099 # 5). He ask’s May if she can figure out how to work it. Little does Miguel know, that Tyler is also watching from the cameras, intrigued at this device, quite likely plotting to use it, or the technology gained from it, for his own use.

Trapped in the electric field, the living Daemos makes the spiders a one time deal. If they let him go, he and all his siblings will spare the two. Naturally, both the spiders disagree to his deal. Daemos warns them that they have made a grave mistake.

Spider-Man 2099, after refusing the deal, heads off to the bio lab, leaving Lady-Spider on her own in the lab to continue to autopsy and keep an eye on living Daemos, who has now gone into trance mode. 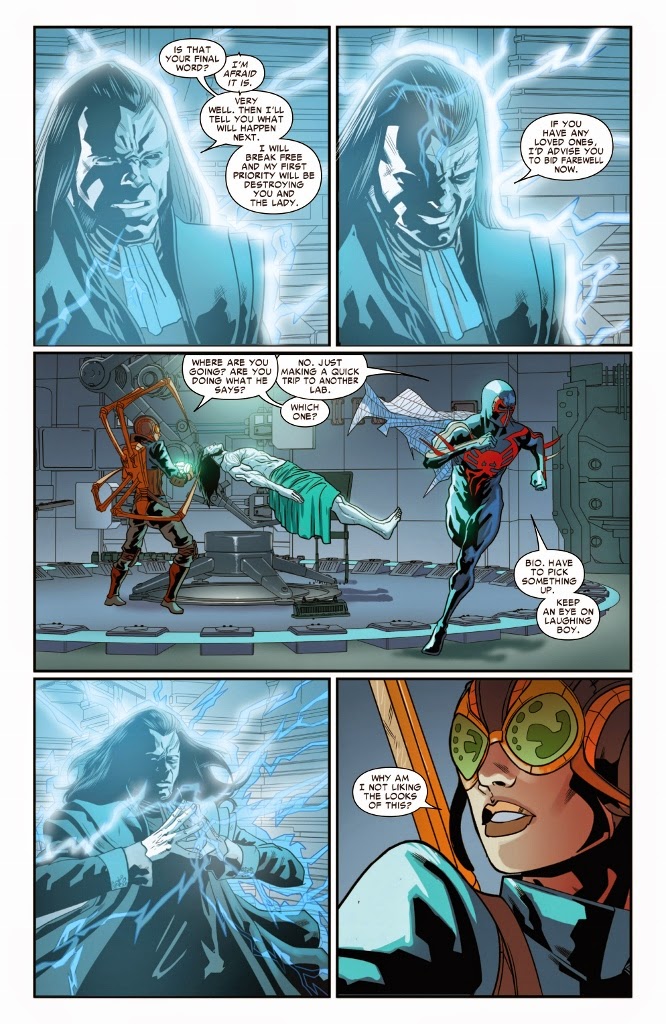 I’m assuming that, although not at all mentioned here, the two managed to find some pretty useful information from Daemos’ dead body, resulting in Miguel rushing to the bio lab. At the bio lab, he asks the doctor there for confirmation on whether they have a cure for an unnamed disease (presumably) He then asks the doctor to synthesize a dose for him.

Just then, Lady-Spider sends Miguel a distress call. Daemos’ readings are off the charts and he is attempting to break out of holding. His plan is of course to kill himself so another clone body can come and kill them both.  (This is really starting to get like the Prestige with Hugh Jackman)

Naturally, Daemos is next seen riding a flying motorcycle type thing heading towards the lab. He is stopped however by Punisher, who was given a tip about Daemos by Spider-Man 2099. 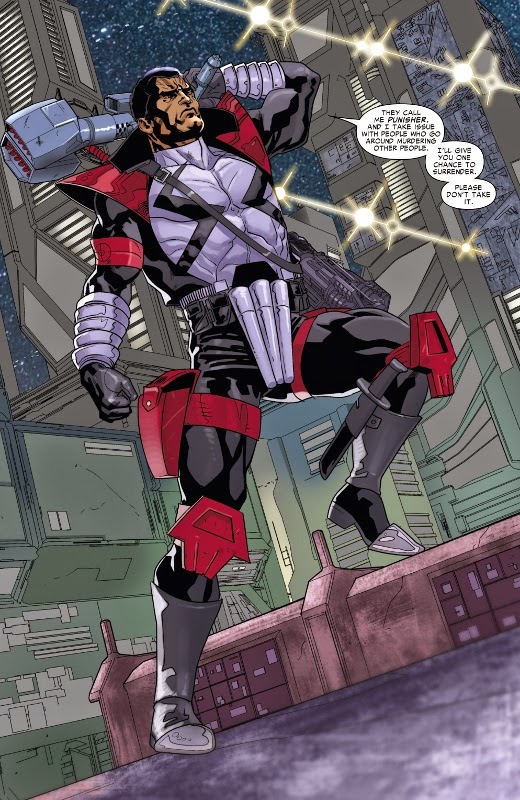 Punisher and Daemos battle it out a little with Punisher ultimately buying Spider-Man enough time to escape to another world using the arm teleporter May was trying to get working.

The two head to the “safe zone” only to find several dead Spider-Man bodies, including that of Captain Universe.

Thoughts
This issue contained almost nothing that I had expected. I thought the story would be more about their findings from experimenting on Daemos’ dead body. Instead, we had several panels for the arm-tech from the other Spider-Man 2099, death threats from the living Daemos, and the Punisher! In a sense though, not having a repeat story that we already read about in Amazing Spider-Man is great.

From the moment Miguel mentioned that Daemos would have to die before escaping, it was clear which direction this story would go. It was a pretty dumb thing for him to say really. For an immortal person, death really wouldn’t be too much of an issue. However, this issue, as mentioned earlier really reminded me of the Prestige, where Hugh Jackman, keeps killing himself so his clone, possessing his thoughts can continue the magic show and surprise the public.

However, the problem with both the Prestige, and the Inheritors is that, their thoughts are not transferred to a clone body. Instead, they are copied to the clone body. This means that when they die, they actually die, never to rise again and have their thoughts copied to another body. I’m not too sure I would call this immortality. It would seem like immortality to people around, but you would be dead for good.  Anybody else follow?

Regarding the “cure” that Miguel got from the bio lab, there’s no doubt that this cure will help the war against the Inheritors. What the dose cures however is still unknown.

The dialog in this issue was great. Tyler Stone, being so afraid of Spider-Man 2099 was pretty entertaining. Also seeing Lady-Spider, much like Spider-Man noir, reacting to technology was also pretty cool.  I also like how Lady-Spider insisted that she did matter when Spidey 2099 told Tyler that she didn’t. If Miguel didn’t already have a girlfriend, I’d be rooting for a Lady-Spider/ Spider-Man 2099 romance.

Punisher holding his own against Daemos was absolutely awesome. You would think that Spider-Man is of a higher class than Punisher is, but this issue proves otherwise. While in every tie-in story before this, all who come to Spider-Man’s aid have failed miserably ( the avengers etc), Punisher somehow is able to single handedly take out and outsmart Daemos. Slightly inconsistent with the other books, but still enjoyable.

If there is one thing to like about this issue, it is that this remains to be a Spider-Man 2099 issue, with Tyler Stone, and his Punisher all playing roles in the issue. Though a Spider-Verse Tie In, this issue does not lose its 2099 element.
Finally, didn’t Captain Universe’s body turn into a skeleton frame like figure after having his life force sucked out of him by Lord Solus in Amazing Spider-Man # 11 and 12? Somehow, he has his flesh and costume back on his dead body in this issue… 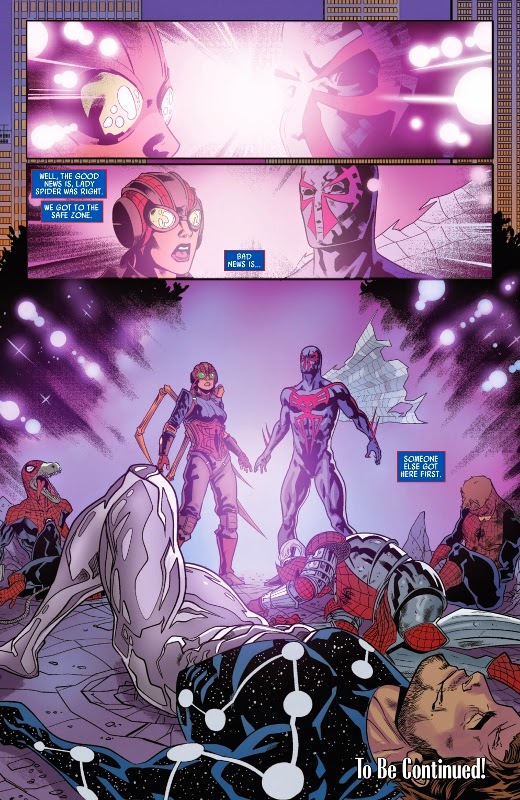