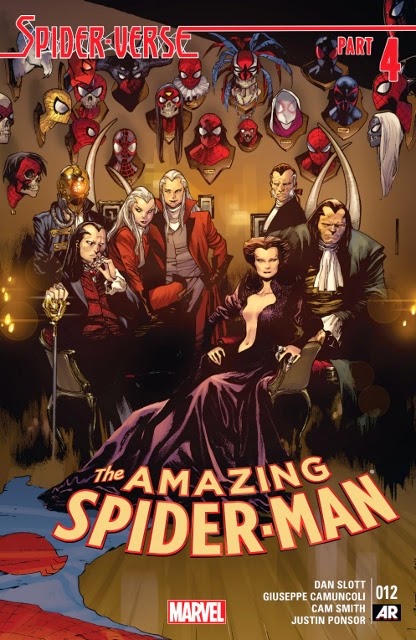 The issue begins where it left in Amazing Spider-Man # 11, with baby Benjy, whom we found out is the Scion, being captured by Morlun. Captain Universe was killed by Solus, and the Spider-people are going frantic. Spider-UK calls Peter (616) for help, while Superior Spider-Man decides to gather some men to try to attack Lord Solus, hoping he was weakened by his fight with Captain Universe.

Unfortunately, that idea doesn’t work that way as Lord Solus is more powerful than before, having just absorbed, the Enigma force from Captain Universe. Just then however, Parker, Gwen and Anya come with Japanese recruits –Spider-Man J, Mangaverse Spider-Man (who is actually black and white), and Takuya Yamashiro aka Supaidaman (Old Japanese tv series, who has the power to summon and control a giant robot name Leopardon) 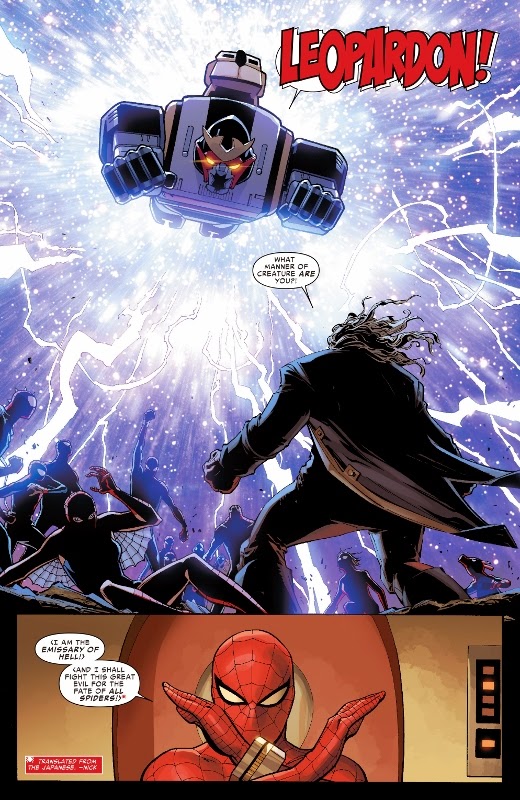 Leopardon manages to hold the sole attention of Lord Solus, which gives Peter the idea of using the opportunity to get the other Spider-Men to the safety of another earth. Superior Spider-Man is impressed that Peter would sacrifice a man leaving him to fight alone against Lord Solus, though Peter assures him he has a plan.

In the meantime, we also get a recap of what took place in Spider-Woman # 2, where Silk stumbled upon a post nuclear war world where everything is destroyed and radiation levels are high. More importantly however, the Inheritors cannot venture into this earth. Silk then wraps herself in webbing to protect herself from radiation and head to a "safe spot" which she claims she knows.

Anyone who read Spider-Woman # 2 though would have already known about this (except for the "safe spot" part), thus making Spider-Woman # 2 most unnecessary to read for a person who just wants to follow the spider-verse story.

The Spiders eventually find themselves on a random world, still ruled by Dinosaurs! Thinking themselves temporarily safe, Peter decides to check up on his other teams. Miles and Ultimate Spidey cartoon are busy with their other, mostly cartoon recruits, including a talking car, and a cowboy Spider-Man.

Takuya Yamashiro, manages to port safely to the same dinosaur world using a device probably given by Peter as part of the plan and re-joins the others. Unfortunately, his giant Robot was left damaged on Earth 13 and could not be saved. 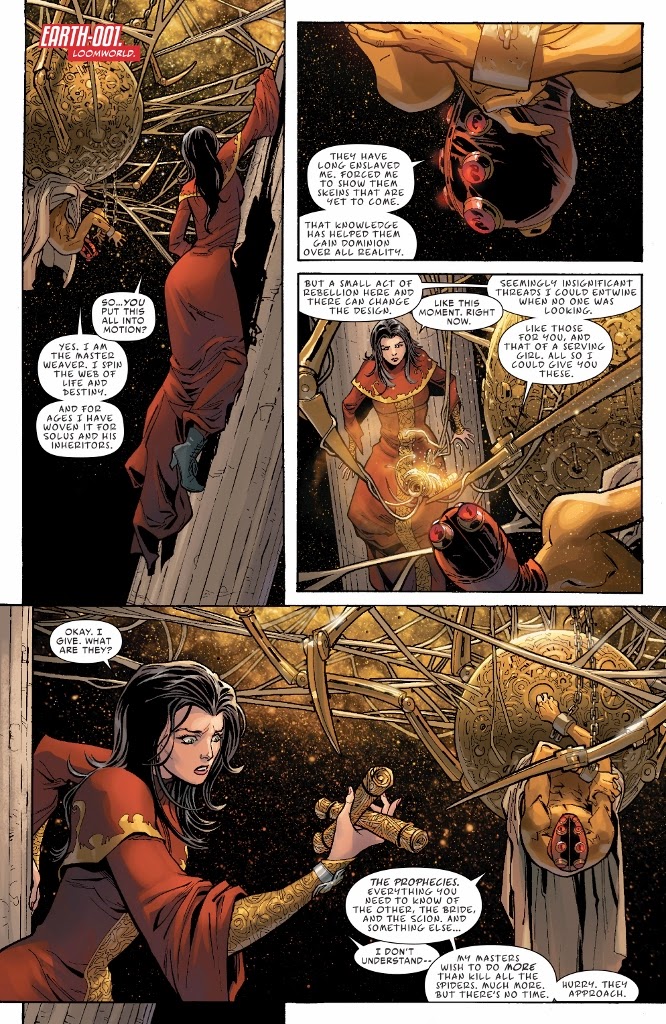 Jessica Drew also makes communication with the rest of the team, updating them on her convenient situation as Morlun’s handmaiden. Peter finds it all too easy and has some slight suspicions. Fortunately though, things are going smoothly for Jessica, not because it is a trap but because the writer of this whole story – the Master Weaver had planned it such. The Master Weaver has a short conversation with Jess, explaining his story of captivity and how he has been slowly rebelling through little unseen acts, including the act of designating “Jessica Drew” of the Loomworld to be Morlun’s pet. The Weaver then passes Jess some scrolls containing the prophecies that would help reveal the Inheritor’s plans. Jessica doesn’t have time to read it however as Morlun enters the room with Baby Benjy. As such, she teleports the scrolls with the little remaining power from her wrist teleporter to Peter.

Lastly, Peter makes contact with Spider-Man 2099 to find out if they have learned anything about the clones yet. Lady Spider and Miguel are still conducting an autopsy, but did find some important information that could be used regarding the Inhertor’s DNA. Unfortunately, before they can reveal that information, they are cut off by Jennix, who interrupts the call, not wanting Parker to learn what information Miguel had to share. He also boasts about how he has been listening in to all their conversations, knows about their whereabouts and plans thus far and even gives them a heads up, just for fun, that his sister Lady Verna is coming with more hounds (variants of Rhino, Hammerhead and the Ox). It is at this point that Peter receives Spider-Woman’s scrolls, but obviously has no time to read it as Lady Verna and her hounds are killing his team.

Lost for what to do and without a plan, Peter almost loses the faith of his spider team, but is saved by a call from Silk. Silk tells him to jump to earth -3145, before she is cut off by Jennix. Seeing that the spiders are jumping to earth-3145, Lady Verna tells her hounds to retreat.

The survivors find themselves in an earth wreaking of radiation. Superior Spider-Man is furious that Peter has led them to their deaths by radiation. The two almost break into a fight, when Spider-Man India, ( I think) points out that there is a giant webbed arrow, probably left by Silk, telling them where to go.

Following the arrows, the Spiders soon find themselves at the safety bunker of that world which Silk was kept in. Already knowing the combination to the safe from his own world, Peter opens it to find Peter, and the spider totem of that world inside – Uncle Ben.


Thoughts
This was an average issue with a story that pretty much repeated itself. I’ll just go through quickly what new things we actually learned in this issue.

On that last note, I really hope Spider-Man 2099 is not about to reveal to Peter that the Inheritor’s DNA contains pure animal DNA, because Peter should already know that having run tests of Morlun’s blood before.

The rest of this issue revolved around the Spiders running to another safe zone, and there being new additions to the spider team to help fight the Inheritors again. It was quite a shame that Leopardon appeared so late into the story. Had he appeared a little earlier, I’m sure Captain Universe might have survived.

We also seem to be running out of new Spider-Men to add to the team, now reverting to TV cartoons, old series, and talking cars. It really should not be long now before Toby Maguire and Andrew Garfield show up. 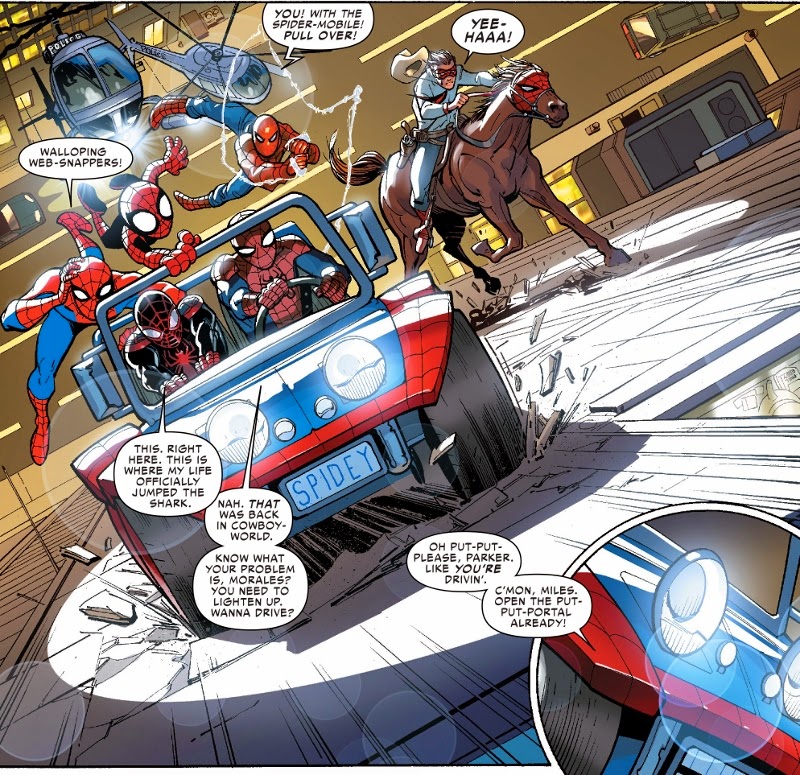 More development takes place with Superior Spider-Man being increasingly sarcastic and mocking Peter’s leadership throughout the issue hinting that things just might get ugly for the both of them at the end of this story. Spider-Ock is not the only person angry at Peter however as May Parker is equally angry having just lost her brother claiming that all the Spider-Men there are fakes and that her father was the one true Spider-Man.

The reveal that the Weaver has been planning everything from the start pretty much means that he has been writing their stories the whole time, playing God, pre-ordaining the spiders lives, though he somehow managed to get himself enslaved by the Inheritors.

The stories that I was actually looking forward to, such as that of Kaine, Ben and the other Jess, and how Spider-Woman got out of Morlun’s embrace at the end of Spider-Woman # 2 ( or if she did at all! yuck) were not told in this issue. In this issue it is very clear that Jessica Drew is his Morlun's sex slave, quite demeaning for Spider-Woman in a book titled after herself I'd imagine. Now that we know Jennix has been listening in on all the conversations however, it should not be long before Jessica’s cover gets exposed (probably in Spider-Woman # 3). 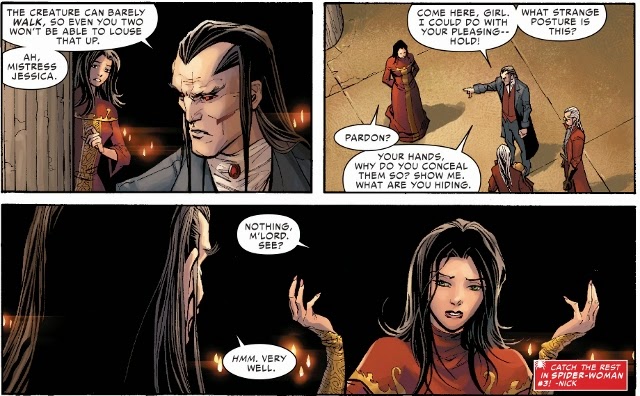 The final reveal with Uncle Ben was not that big a deal as the hype was made out to be over the internet. However, what I thought was more interesting was the fact that there stood a bunker, designed specifically by Ezekiel to hide from the Inheritors in this Nuclear struck world. While there was not another Silk in this bunker, could it mean that there are also other bunkers in the other worlds, with more Silk’s? Why aren’t they being recruited?

Finally, I found it odd that in every issue thus far, the teleporting wrist watches brings the spiders exactly where they want to go, but in the nuclear world, the spiders are for some reason teleported to the middle of nowhere. I also find it strange that the spiders, including Superior Spider-Man, having radiation flowing in their blood, think they will die from radiation when Peter previously injected himself with enough radiation to kill Morlun the first time and clearly did not die. Also, why hasn’t Peter used the same tactic on the inheritors again yet??