Since Amazing Spider-Man has re-launched, we have our Annuals re-launched as well.  The book has a few stories, of which only the first is a little interesting in my opinion, and that too barely.

Story 1: I can’t help myself

This issue begins with Peter leaving his office when Sajani catches up to him. She asks if he read a work related report she sent him via email, to which he responds that he hasn’t yet. She begs him to read it through as his input is required at a meeting the next morning. 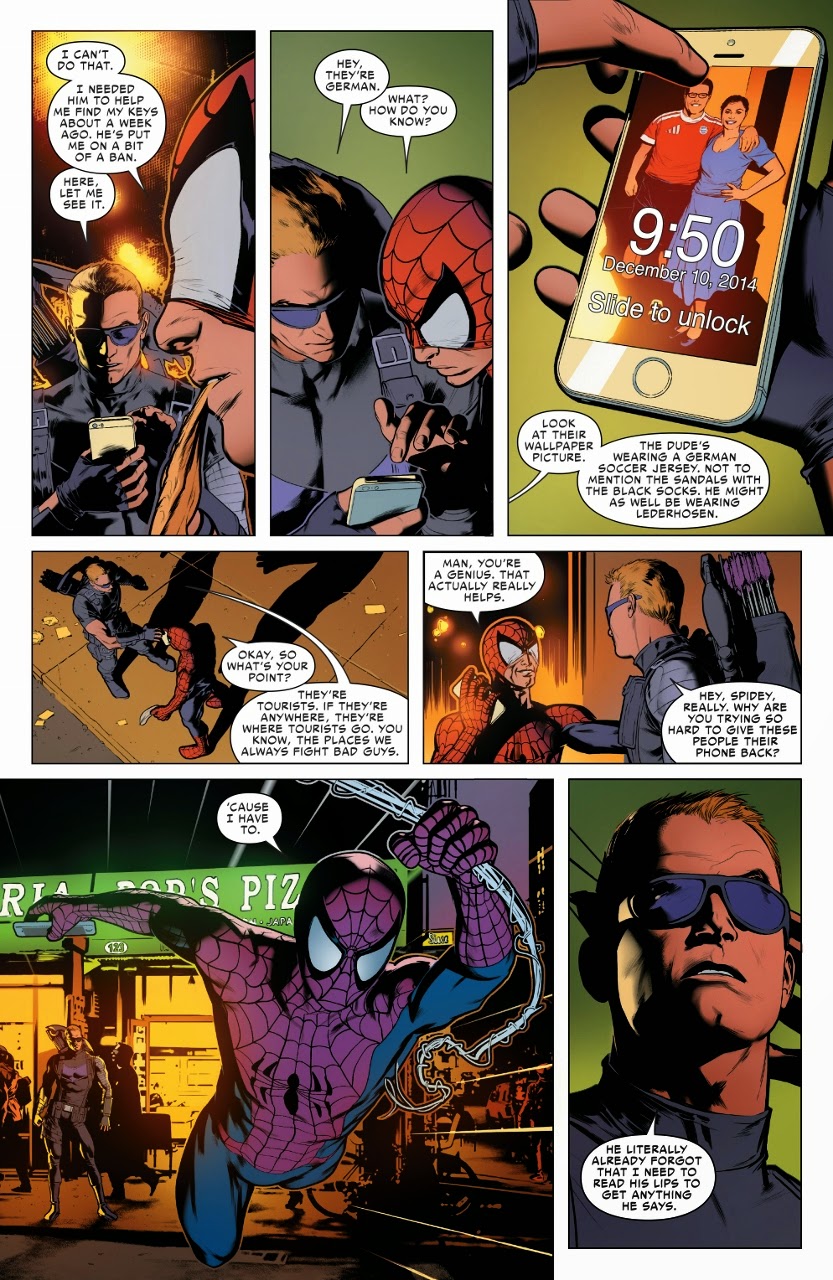 Peter reminds himself that he has to go home and read the report as his first priority. On his way home however he notices police sirens going off. Naturally, he changes to Spider-Man and try and help the cops. As it turns out however, they don’t really need help since it’s just a traffic accident.  At the scene however, Spidey notices a cell-phone, left at a tree. He then makes it his top priority to get the phone back to whomever it belongs to.

The rest of the issue is centred around this plot line, with Spider-Man helping others along the way including Hawkeye, who is now deaf and can only lip read. Spider-Man is unable to unlock the phone, and therefore can’t make any calls out to figure out who the phone belongs to. Hawkeye offers some help, pointing out that the screen’s wallpaper is of a German couple, seen the German soccer jersey, and their clothing style. He then advises Spider-Man to go look for these people over at the touristy part of town. He swings all over Manhattan and is about to give up when the phone starts ringing.

The couple called their phone, hoping whoever answers might return their phone. Spider-Man answers the call immediately and rushes to meet them at the airport before their flight takes off. Despite being slightly detoured by the Menagerie (White Rabbit’s team of animal bad girls) , Spidey eventually makes it to the airport in time to return the phone. 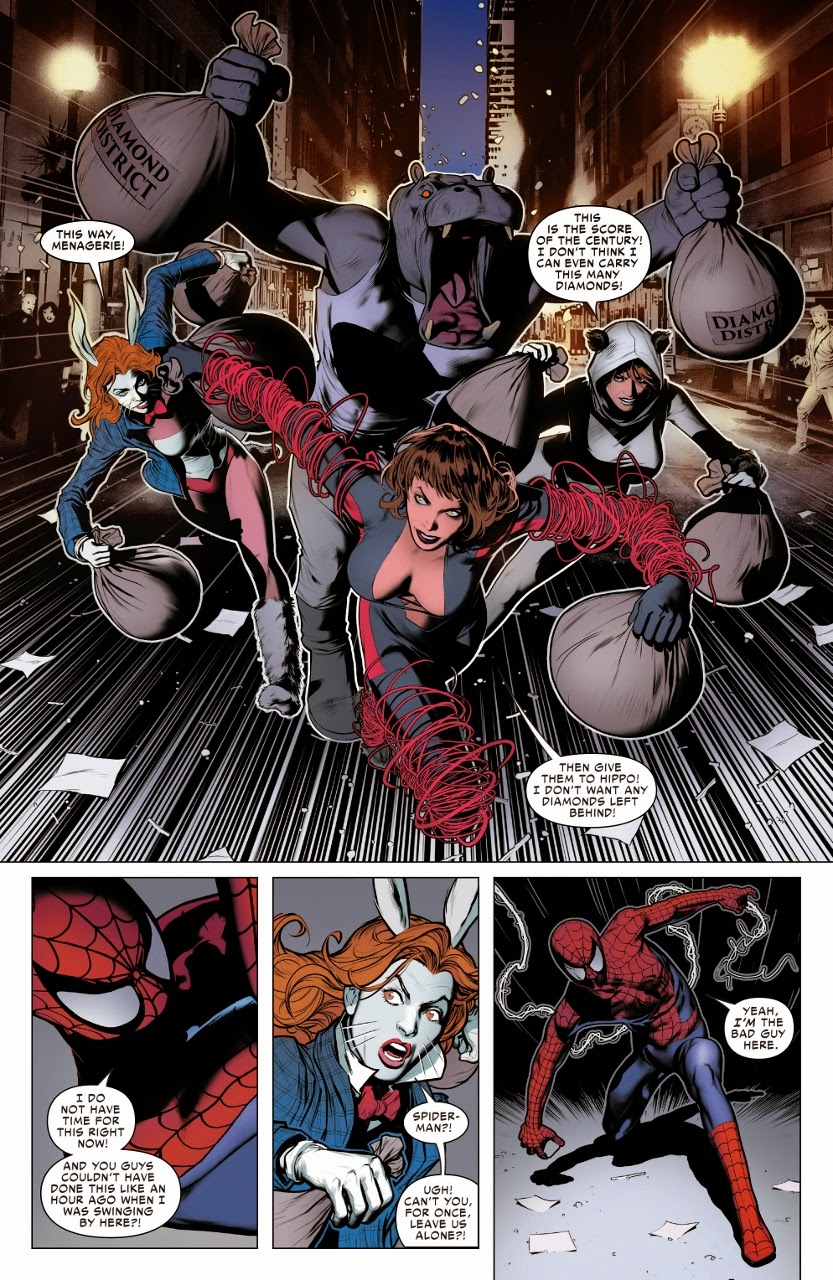 The next morning at the office, Sajani asks Peter if he read through the email, which again he replies that he has not. Sajani is obviously not impressed but reminds him that the meeting is not for another hour, and he can use that time to read through.  Peter agrees but is distracted again by police sirens as soon as Sajani closes the door to his office.

This is a typical cartoon network type comic (not really my thing) with a story that just doesn’t make sense. It is just one page so I’ll put the scan here for you readers to read the whole thing yourself. 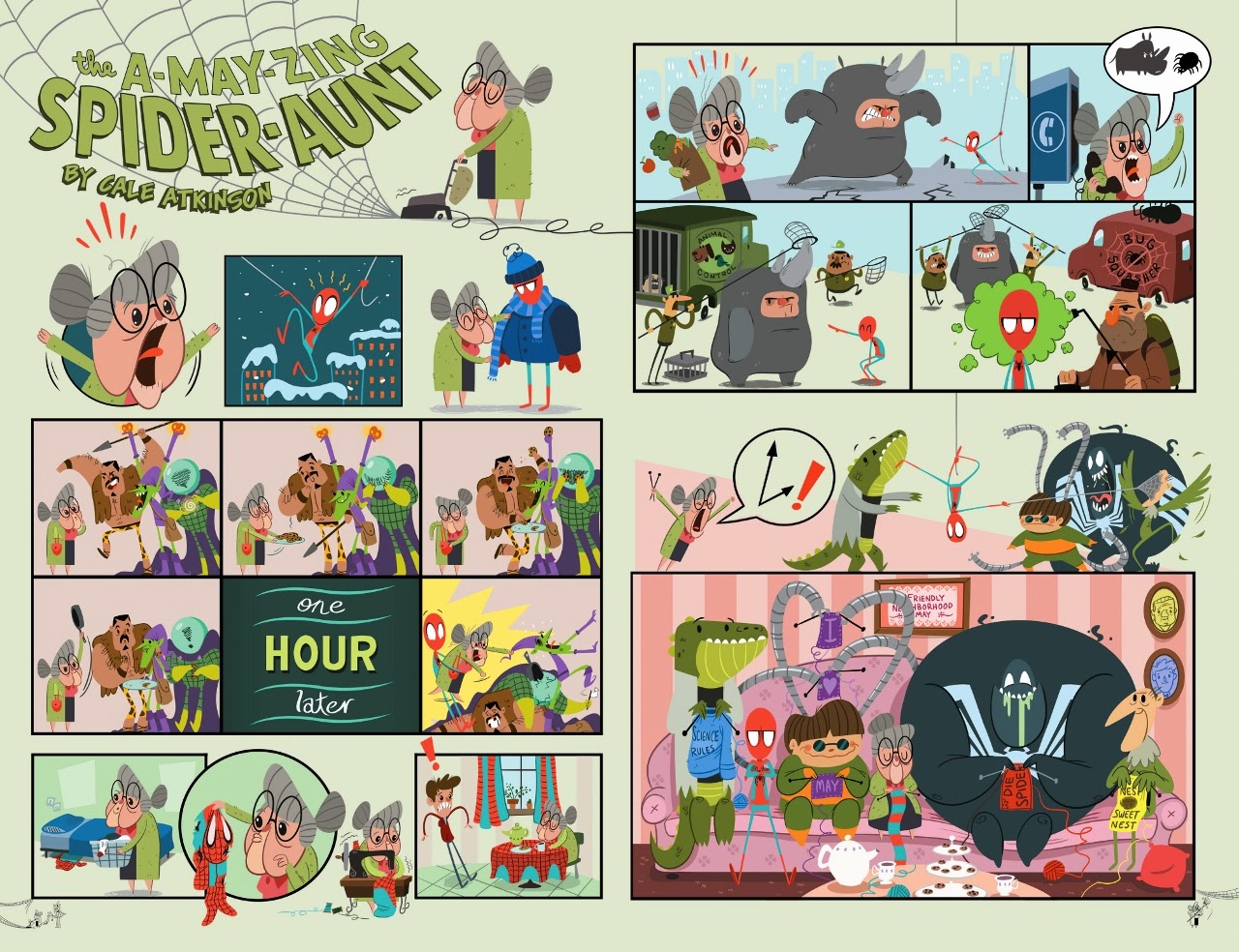 In this third Story, Dr Bong and his associates ( Angar the Screamer, Shrunken Bones, Gorrilla-Man, Ruby Thursday, Chondu the Mystic) , break into the Beyond Corporation labs. The plan is to enter the Anechoic Chamber, and with the help of Chondu, unleash the Magi-Science of the Cosmic Bong to open the multiverse.

The story is as lame as the bad guy’s plan and Spider-Man turns up to stop them all without saying a word. As it turns out, we find out at the end that Spider-Man had laryngitis. 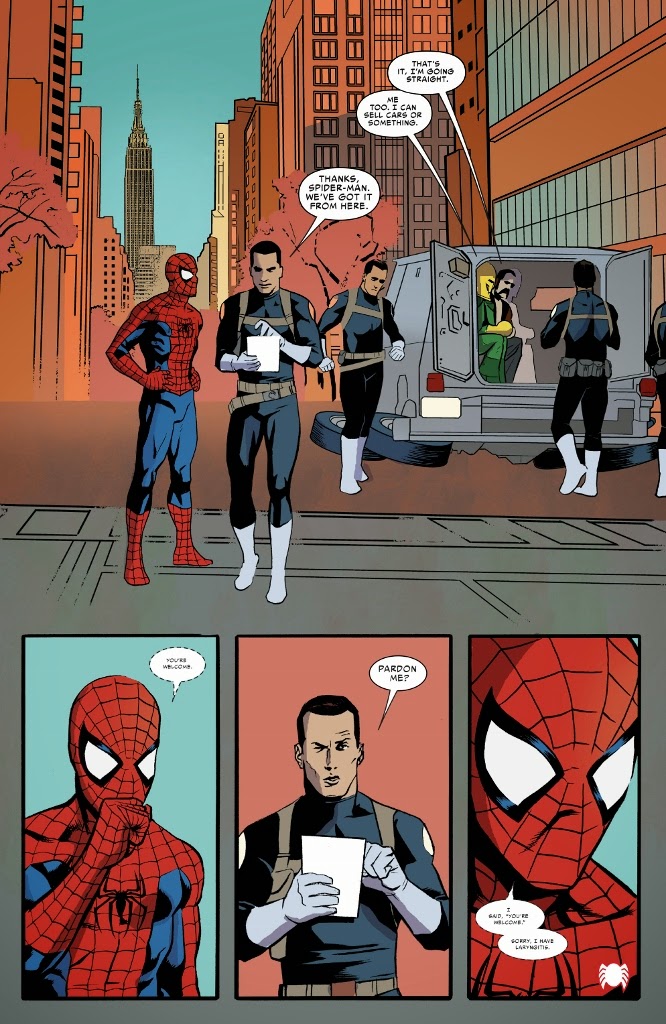 Thoughts
This issue was really unnecessary for readers looking for anything related to the current, or even previous stories in the Amazing Spider-Man books.

All three stories were extremely light, with almost no weight to them at all.  The first story, which is the only story worth talking about highlights Peter’s inability to cope with, or run the company that Dr Ock set up for him during his time as the Superior Spider-Man.

For a person whose life’s inspirational words are “With great power comes great responsibility,” Peter shows absolutely no responsibility to his company as CEO. This story would probably be the reason Mary Jane broke up with Peter, seeing that he is more Spider-Man than he is Peter.

The story however is quite controversial to Peter’s usual character. Surely Peter could at least spend a few minutes at the end of the issue reading the report, after all he does have that responsibility to the company which involves the lives of all his employees.

As for the main part of the story, where Spider-Man goes through so much trouble to return the cell-phone, here we see the Friendly Neighborhood Spider-Man that we all know very well. Though the plot may be a little silly - being that Spider-Man can’t return the phone because he can’t get past the lock screen, the point behind the whole story is clear – Peter loves helping people and can’t help himself from doing so, despite having other responsibilities.

Also, in this age where every smart phone’s contacts, pictures and information is backed up to Google, I’m quite sure those tourist could have easily managed without it.