This is the final story in the five part series involving Captain Watanabe's Spiral down from hero to anti-hero. 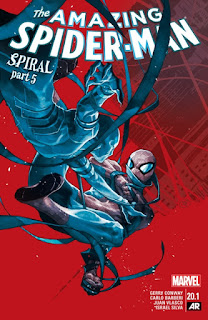 The issue begins with Spider-Man and the police busy trying to stop crime all day in the Third Precinct. Spidey has a hard time understanding why so much crime is taking place all in one day in the same place. Felicia eventually fills him in while fighting him. She compares the criminal underworld to a Jenga Puzzle. Spider-Man and Wraith's activities over the last few days removed too many pieces from the Jenga Puzzle all at once, thus causing it to crash down all at once. 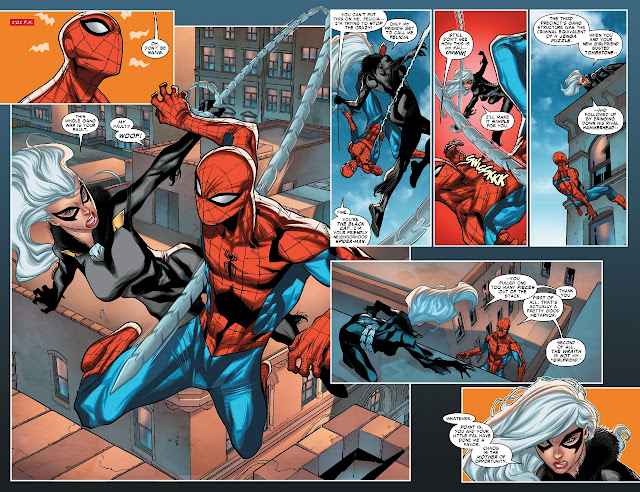 Spider-Man, as usual does not fight back when attacked by the Black Cat and instead lets her go as he has to focus his attention on Mr Negative. 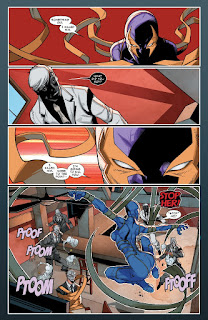 Over at Mr Negative's hideout, a meeting is taking place with his inner demons. Wraith crashes the party, surprising Negative when she informs him that she had killed Donald, one of his inner demons. She then continues to state that she is here to kill Negative as well. Upon hearing this, Mr Negative runs for his life, instructing his demons to stop her.

Just then, Spider-Man drops in, helps fight the bad guys and confronts Wraith once and for all. Wraith finally gets around to convincing Spider-Man that she is past saving and that he is wasting his time. She tells him that Yuri Watanabe is dead and all that is left is Wraith. Spider-Man finally lets himself believe that his friend is truly lost and carries on to stop Wraith from killing Negative.
Spidey swings in to pull Wraith out of the crowd, not to save her, but to save the innocent civilians whom Wraith would probably beat without thinking twice. He then knocks Wraith out with a single punch and webs her up for later.

Shortly later, Spidey catches up to Mr Negative and again knocks with out with a single punch. Though outwardly, it seems like the day was a success having stopped the bad guys, Spider-Man feels that he has failed his friend Yuri. He concludes that everything in this world turns, round and round, in a spiral, either going up, down, or round and round.

I have to admit that somehow at the back of my mind I figured that Yuri Watanabe would eventually come out at the end of this story to be the hero that she once was. Unfortunately, the story had a slightly darker ending to what I had expected. Nevertheless, changing her into an Anti Hero was not the worst thing to happen. Her personality, costume, and name perfectly suits the description of an anti hero anyway.

Overall, this whole mini series was good for fans of the Wraith. As a Spider-Man Fan, and certainly not one of Mr Negative, this story was a little dry with quite a sad and strangely realistic ending about life for a comic book. If it was not for the occasional appearance of the Black Cat in this five part mini series, I would say that there was nothing really compelling me to buy this five part mini series.