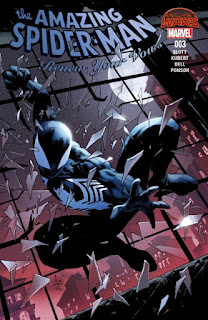 This issue begins with Regent, asking his doctors if he would be able to maintain Spider-Man's powers if he absorbs them like he did for the rest. As it turns out, the powers Regent absorbs from the heroes fade over time. Regent does not want his Spider-Powers to fade like the others should he absorb them as he needs it for the great task  at hand.

Elsewhere, Spider-Man, in his black costume makes a visit to the Tinkerer to ask for some inhibitor chips. The Tinkerer explains that they are banned tech and that they don't even work. Spider-Man assures him however that it would not be an issue. Unfortunately for Spidey, the Tinkerer was already approached by Regent earlier. He soon sounds the silent alarm, causing the Sinister Six to be alerted. In the shadows elsewhere, Sandman, watches as his former friends, the Sinister Six make their way to Spider-Man's direction. He calls SHIELD to inform them of his observations.

The Director of shield, shown in the shadows as a figure with an eye patch, instructs Flint to follow the Sinister Six but remain unseen. Over at the SHIELD headquarters a discussion is being made on whether or not Spider-Man is worth saving since he abandoned them in their final battle against Regent all those years ago.

Over at the Tinkerer's place, Doc Ock tries to take on Spider-Man before his team members arrives. Having no time for games, Spider-Man quickly defeats Doc Ock, almost leaving nothing of him left. By the time the rest of the Sinister Six arrive, Spider-Man is long gone, and Doc Ock is in a horrible mess. While most of the team wonders about Spider-Man's news approach and his motives for the non functional inhibitor chips, Kraven immediately understands the situation, knowing that Spider-Man's behavior is due to the fact that he is protecting his "cub," whom he deduces attends the school that Spider-Man had last appeared at.

Back at the Parker home, Annie watches as Jameson slams Spider-Man on TV for ruining everything that the Regent has built. Annie asks her mom about what her Father was like before. MJ explains to her daughter about Peter's Uncle Ben and how he learnt about responsibility.

Peter later returns home with the inhibitor chips and proceeds to fix them with a sample of Annie's DNA ( strand of hair). MJ explains to Peter how the inhibitor chip will not be a permanent solution and that Regent will continue looking for them now that Spider-Man is back. Just then, a recording is played on TV instructing all parents of children attending Annie's school to appear for a screening. Peter gets to work on the inhibitor chip and assures MJ not to worry.

The next morning, Peter, MJ and Annie all arrive early at the former Avengers Mansion for the screening. As expected, the family make it through the scanning undetected. When a young boy however is caught with some powers, the alarms go off. The father of the boy is apprehended thinking he must be Spider-Man. Immediately the Sinister Six, or five now without Ock, begin pouring in. Peter's first instinct is to remain hidden to protect his family. Annie however convinces her father to be the hero he once was. Peter obliges, wanting his daughter to live in a world of heroes. He warns his family that from this moment on, it will be them against the world. Annie however has faith in her father and has no fear.

Peter changes to Spider-Man and makes his first appearance by webbing Hobgoblin's bomb to his hand just as he was about to throw it into the crowd, sending a hand-less Hobgoblin flying into the building. 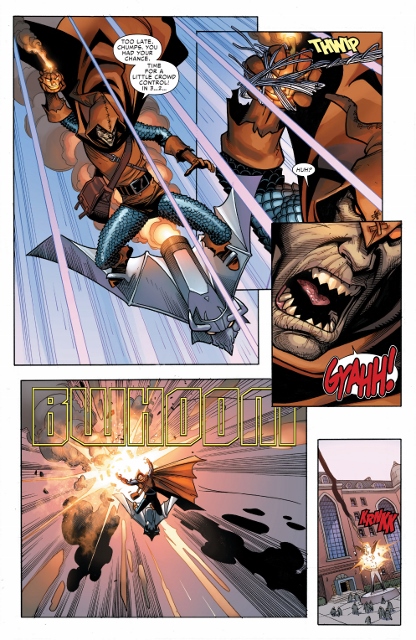 Mysterio immediately searches the camera footage for the family without a father at the same time of Spider-Man's appearance to locate Spider-Man's wife and child. The crowd below wonder why Spider-Man s fighting Regent's men as many of them truly believe that Regent is a hero. While Spidey fights the remaining Sinister Six, he witnesses his wife and child being kidnapped by two people in uniform.


The final scene of this issue truly leaves the reader wanting to know what happens in the next issue. The story is well written portraying Spider-Man, no longer as friendly neighborhood hero, but rather a no-nonsense hero who is serious about getting to business as quickly as possible, looking out for his family as his most important responsibility first.

Annie's innocence and admiration for her father is exactly what Peter needs to push him back into the superhero business. Not knowing well enough about the danger she faces, Annie wants to do whatever she can to help her father with her powers. With MJ and Annie kidnapped however, Spider-Man will probably go from being the unfriendly neighborhood Spider-Man to the Ruthless Spider-Man.

The fact that this story takes place in an alternate timeline makes the possibilities endless. There is no need to keep Spider-Man as a good hero by the end of the story. If anything were to happen to his family, the writers would not think twice to put Spider-Man in a deep depression, sending him off the deep end.

With this in mind, us readers are left even more curious, wondering what would happen next. There are also a number of unanswered questions from this issue which will probably be revisited in the issues ahead such as the identity of the new leader of SHIELD, and what great task Regent was referring to when he was asking about his retention of Spider-Man's powers when he absorbs them

Regardless, there are a number of things that make this book extra enjoyable. Firstly, it is always great to see that Spider-Man can, and could have kicked everyone's ass whenever he wanted if he didn't hold back. 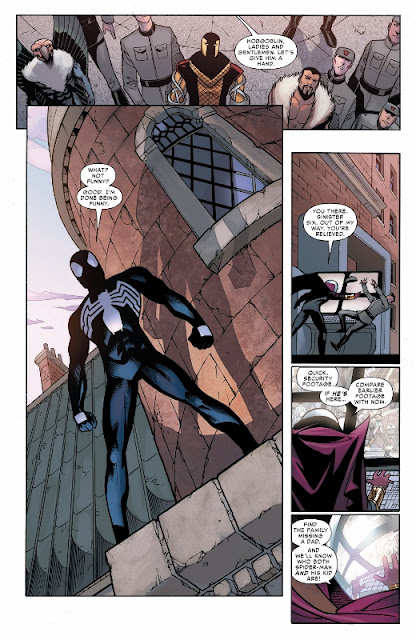 Second, the dynamics between Peter and his innocent daughter is great to see and read and this is something we never got to see in the canon story line.

Finally, Peter, happily married to Mary Jane, despite the circumstances is always going to be a good read.