This issue follow Spider-Man 2099, after the events of Spider-Verse, where he, like all the other versions of Spider-Man, return back to their respective homeworlds. Unfortunately, Spider-Man 2099 returns to a home he can not recognize as everything has been destroyed!

He comes across two "Scanners" who try to kill him. Spider-Man 2099 easily ties them up and begins asking questions about what has happened. Neither one of the two seemingly only people on the planet recognize him. 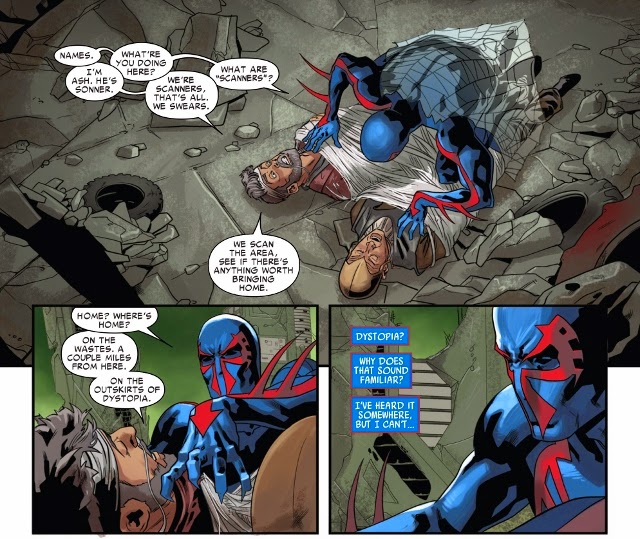 Spidey learns that  the scanners have their home base set up just on the outskirts of Dystopia, a place that sounds familiar to him. Spidey gets the two to lead him back to their base. When they arrive however, the camp is empty. Before long, the two are captured by an army of soldiers armed with nuclear weaponry, something countries had stopped using for years now. Spider-Man 2099 is left to fight off the bad guys, all of whom do not recognize him. He manages to escape the soldiers successfully for a while but is soon blown away by a some kind of sonic wave.

We later find out that Spider-Man was knocked out by Maestro, a future incarnation of the Hulk, and leader of the army.  Spidey 2099 recognizes Maestro from a previous encounter with Captain Marvel and Rick Jones in one of his old alternate reality trips.

Maestro, though he thinks he recognizes Spider-Man actually thinks that he is the original Spider-Man in a new costume. This leads Spidey to conclude that this Maestro is either from before their previous encounter, or is a totally different alternate version of Maestro altogether. 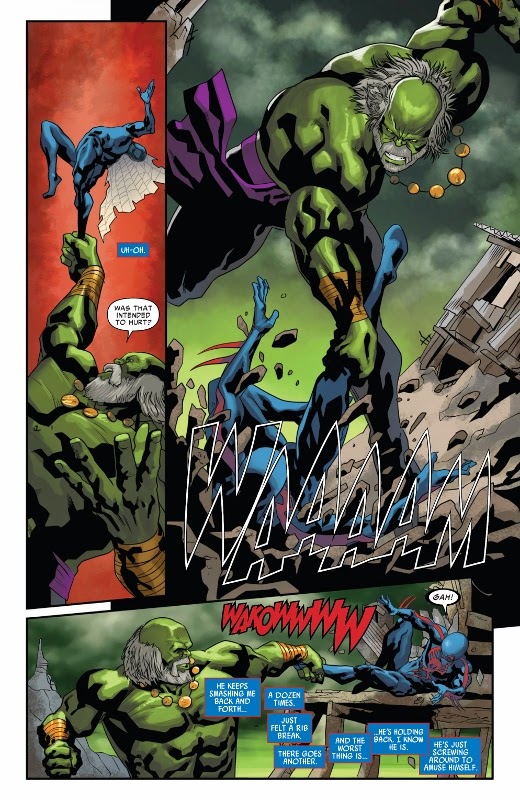 Spider-Man fails in trying to convince Maestro that he would bring them both to the past via a time travelling device. Enraged that Spider-Man would think him a fool, Maestro proceeds to beat Spider-Man severely. Still curious as to how Spider-Man arrived at to this world, Maestro agrees to answer some questions in exchange for answers to his questions about how he arrived to this place.

Naturally, Spidey's first question is to find out why all of this happened, to which Maestro explains that the end of the world was a result of a company called Alchemax. Upon the arrival of Maestro's castle, the two captured scanners ask what had become of their people. Maestro shows the bodies of the their people all tied to a "hollywood" sign that spells MAESTRO, and adds them to the collection.

Maestro then throws Spider-Man in a dungeon where his other captive whom he has been hoping will help him with time and dimension travel is also held. Spider-Man looks up to see that it is Strange (Dr Strange of his world) 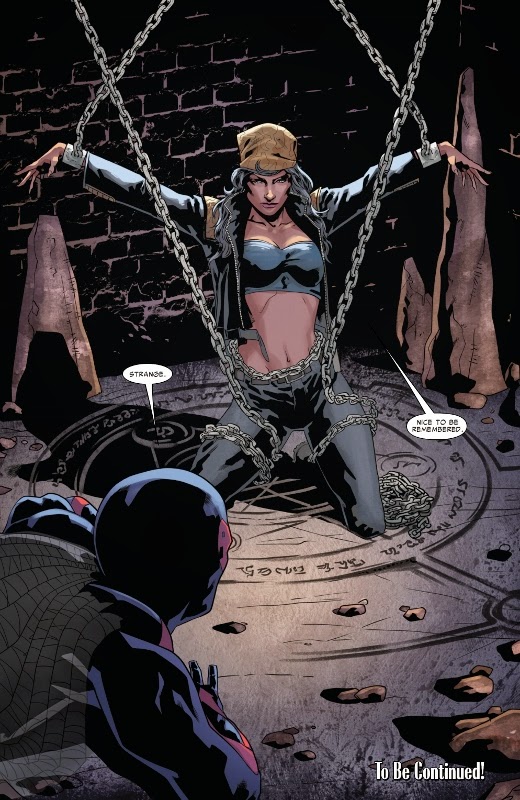 After a whole series about alternate worlds and dimensions, I was hoping that things might get back to normal for a while before Secret Wars begins and the dimensions are revisited. Unfortunately, that is not at all what we get in this issue.

We revisit old friends ( or mostly enemies) of Spider-Man 2099, creating a little tease to maintain interest for old fans of 2099.

What is good about this issue that leaves the reader wanting to read the next issue is that throughout the issue we are left wondering where in time, or in which reality did Spider-Man end up on.

The answers are not spelled out specifically, but what we do know is that Alchemax, caused the end of the world, meaning that it is quite likely that this is Spider-Man 2099's world, but probably no longer in the year 2099.


I would not exactly call this a good old classic tale, but considering the lack of 2099 elements in the last few Spider-Man 2099 issues, this was definitely the closest it has come to classic.