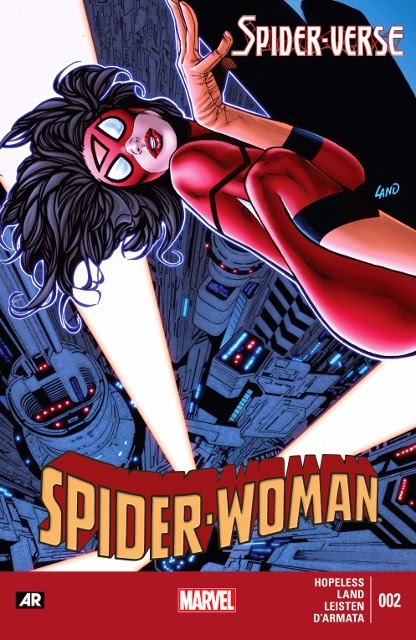 When we last saw Spider-Woman, Spider-Man had interrupted her mission to protect Silk and gave her a new mission. While I previously thought that the mission would be to go back to Earth-13 and help the other spiders out against Lord Solus – see Amazing Spider-Man # 11, I turned up to be quite wrong.

In one of Spidey and Ock’s conversations, Ock mentioned that he knew where the Inheritors were based, but they were not yet ready to face them. Spidey mentioned that they needed someone behind the lines and that he knew who could do the job. It was really quite obvious at this point that he was talking about Jessica Drew, though I somehow managed to miss it.

As such, none better than Spider-Woman, ex-Hydra agent, is sent to the Loomworld, home of the inheritors, sneaking about, learning as much as she can. As she tries to blend in the crowd, she notices that everyone seems to recognize and adore her. Before long, she is kidnapped by an alien creature who brings her to a captain of a ship.

As it turns out, she learns that the “Jessica Drew” of this world is someone very important. She also has a regular “arrangement” with the ship’s captain, for which she gets first pick of the valuables he salvages in return for her…ahem, I’m not really sure exactly.

The scene changes to the Jessica Drew of that world, who is walking around the streets enjoying the adoration of the public, surrounded by guards. A little boy touches her to get her attention to give a gift that his mother spent all day making for her. Miss Jessica’s face changes and her guards push the boy to the floor.

Our Jessica Drew ends up using her pheromone powers to bedazzle the captain and gets some key information about this world, learning that she works for the Inheritors here. Not long later however, our Jessica sees this world’s Jessica coming to the captain’s quarters. Jessica tells the captain quite plainly that there is another her coming to see him and that for everything to work fine, he must act as if it is his first time seeing her today.

The scene switches to Silk, who is having a really hard time escaping from the twins as she jumps between worlds. Eventually though, the twins catch up to her and she breaks her portal jumper watch. With no other choice, Silk jumps into the portal from which the twins came out from, which happens to be Loomworld, where Jessica is.

Earth -616 Jessica eventually finds her way into the Inheritor’s castle, where she spies on her doppelganger exploiting a young waiter, getting him to steal wine from the kitchen for her, despite her being able to get it herself if she had just asked Morlun. The guard comments that the poor boy has 30 lashes waiting for him for what he just did, but this Jessica can’t seem to care less.

Just then, the twins come in with their guards. That world’s Jessica bows down at their presence asking if she may be of any service. The twins inform her that Silk has escaped into their world and ask that she inform the guards if she’s spotted. Upon asking if she may be of any other service, the twins make a comment about how Morlun would not like it if they chewed on his favourite toy. 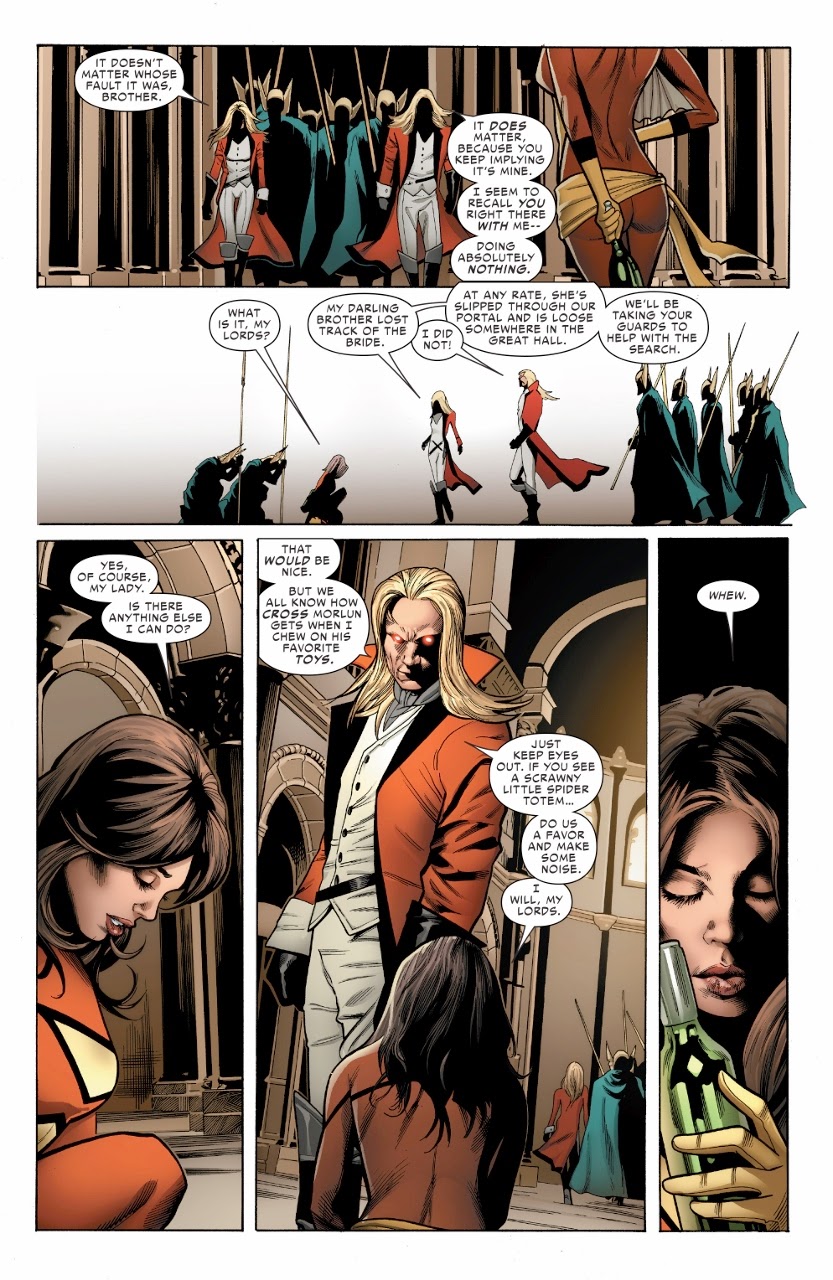 After the twins leave, Silk runs past the hall but pauses when she sees Jessica, not knowing it’s not her Jessica. Loomworld’s Jess tries to alert the guards but is soon knocked out by our Jessica. Silk updates her on the situation telling her that she ran away from Gwen and Anya, and that her teleporter broke. Spider-Woman gives Silk her teleporter and tells her to get out.

Silk jumps worlds again and ends up in a world where a nuclear war destroyed everything. The twins try to follow but are unable to due to the radiation in the place. As it turns out, Silk stumbled into the only world they cannot follow. Silk is left alone in that world smiling to herself, knowing that they now have a weakness. 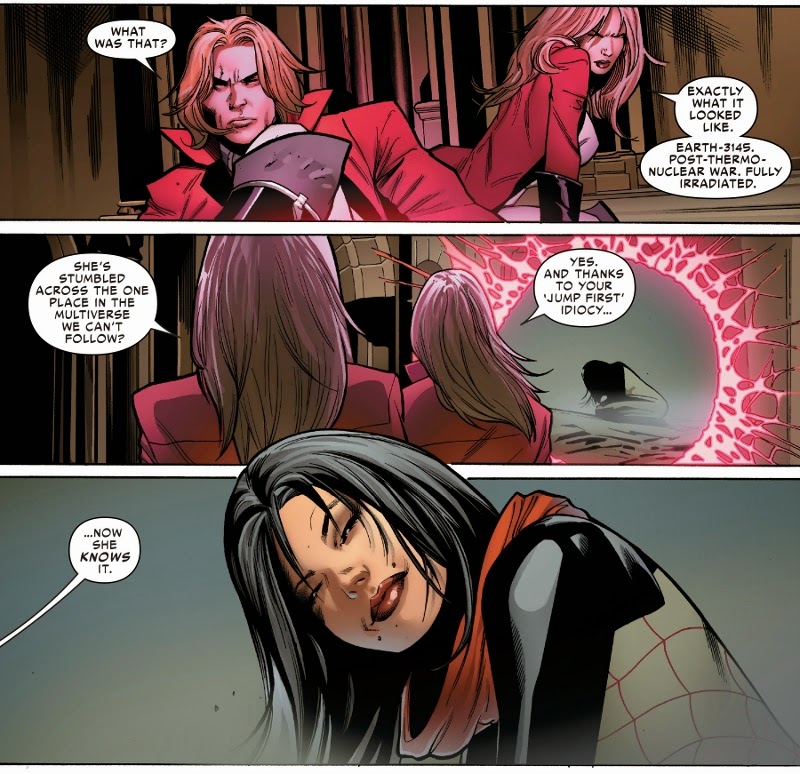 We next see Spider-Woman meet the Pirate Captain again, this time offering him a “chest full of treasure,” though it is safe to assume that the Loomworld’s Jessica is in that chest. She asks him to sail out to sea for two days, and in return, she will reward him, depending on how well she does with her mission while he is gone. The captain agrees and the deal is made.

In the final scene, Spider-Woman is being escorted into the Inheritor’s mansion by body guards. She has clearly taken the place of that world’s Jessica, assuming her identity, yet still wearing her mask.

As she comes in, so does Morlun! Though at first, Spider-Woman bows down as she had seen the other Jessica do in the presence of the inheritor twins, Morlun seems surprised to see her on her knees. He then gets her to her feet and kisses her!

Thoughts
This was a great Spider-Woman book, having its own Spider-Woman subplot to the Spider-Verse story. Unlike the first issue, which seemed more like a Spider-Team Up issue, this issue is clearly about Jessica Drew as Spider-Woman, doing what she does best.

Throughout the issue, Jessica narrates to the readers her thoughts and how weird this other world seems to her. Her slightly sarcastic, comments that she throws in and out of conversation adds to her own type of humour which is brilliant for the book, yet very different from the kind of humour Peter Parker would present.

The Loomworld is mixed reality, during the days of kings, lords, classes, and pirates, yet still having flying space ships and aliens. As Jessica puts it, it is a mix of different worlds that the Inheritors have conquered. The language is clearly still that of older English thus adding to why she can get away with speaking with such sarcasm to the public and still getting away with it due to no one understanding her.


This issue spends a few panels to show what a ruthless person Ms Jessica is to the public and how she has no problem exploiting them. It was pretty interesting to note that Jessica Drew of that world, despite being a spider, was allowed to live in that world. As implied by one of the twins, however, it is only because she is Morlun’s that she is alive.

When we first saw Ms Drew ( Loomworld),  she was portrayed as a spokesperson for the people, probably the reason why she is so popular among the commoners. From memory however, Ms Drew was not waltzing around in her Spider-Woman costume in Amazing Spider-Man # 9, much less with a mask as our Jessica is currently doing and not yet being branded an imposter.

Spider-Woman’s feminist side shows when she uses her pheromone manipulation on the Captain of the ship. It also boggles me how the Pirate Captain is so calm knowing that there are two Jessica’s in the city. As for the “arrangement” that this captain has with Jessica, I can’t help thinking that the arrangement is gold for sex. The phrase booty call was used more than once by Jessica, and she does have pheromone manipulation, so did she sleep with the captain for information? It does seem like a feministic thing to do, yet I wish it was clearly described what actually took place.

Silk’s part to play was a small, yet important one for the Spider-Verse. Her entrance and exit from the story was just enough, being careful not to steal the limelight of the story. Her stumbling upon the radioactive world which the inheritors could not enter coincides with how Spider-Man managed to beat Morlun the first time.

The first time Spider-Man killed Morlun, he had discovered that Morlun’s blood was pure, containing the DNA from every animal there was. As such he injected himself with radiation and faced Morlun, causing him to disintegrate. See Amazing Spider-Man v2 # 35. I’m glad they did not just forget that whole episode and make the inheritors a lot more invincible than they previously were, as the story thus far has been implying. It is actually a miracle for the Inheritors that Peter has not yet used this tactic to attack them again.

As for Spider-Woman getting out of her smoochy time with Morlun, it will probably be quite impossible without having her cover blown, unless she decides to go all feminist again and sleep her way out of another problem like she did before… or maybe she didn’t. Can someone please clarify that for me! Perhaps the captain was just being a nice guy and adored Jessica so much that he had an arrangement to give her first pick of the goods for nothing in return… unlikely though. I will probably have to return to edit this article once I figure that part out… 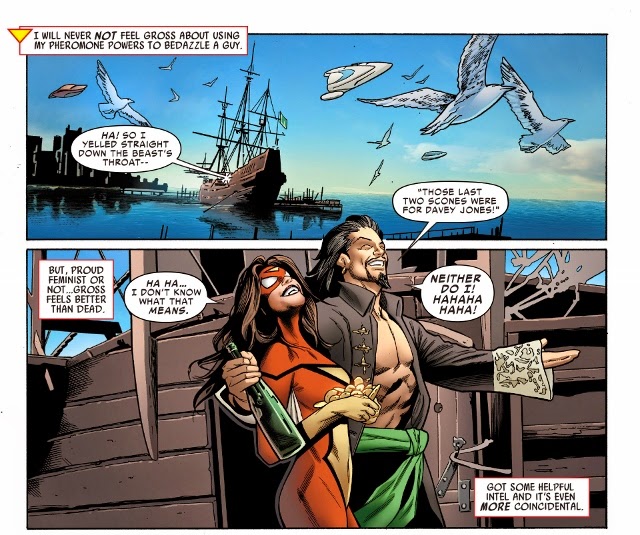