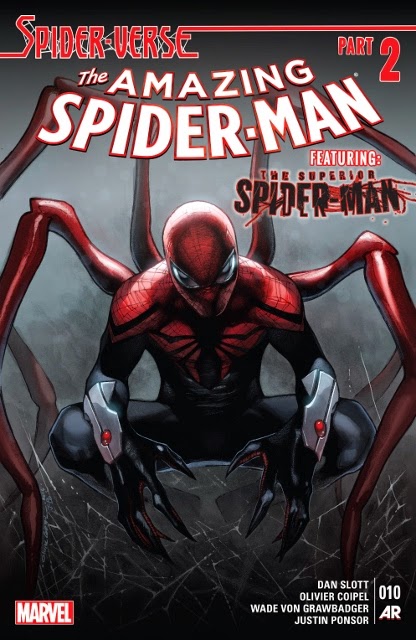 This issue begins in the Ultimate Universe, Earth 1610, where Miles and Jessica Drew of that world were last attacked by Lady Verna and her three hounds. Miles is about to die when Assassin Spider-Man, Spider-Punk and Superior Spidey appear to save him. The three save Miles and Jessica and escape, leaving an extremely pissed Lady Verna behind with her dead pets. 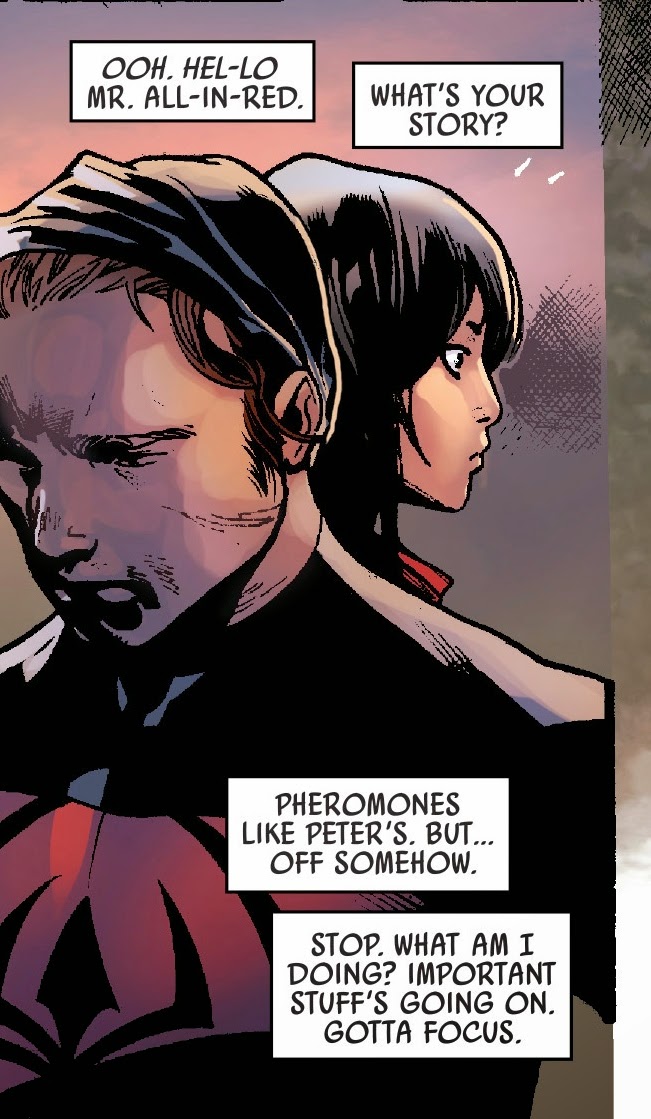 Over at the safe zone on earth-13, home to Captain Universe Spider-Man, our good old Friendly neighbourhood Spider-Man continues to question why they think he is the chosen one. Cindy, who is also present quietly goes from Spider-Man to Spider-Man, wondering if she has the same sexual connection with these other Spiders as she does with Earth 616 Peter. As it turns out, she is not attracted to any of them except for Kaine ( Peter’s clone), but even that she notes is not quite the same.


Old Man jacket Spidey informs the group that they have detected another group of Spider-Men, also gathering, and suggests that they divide into three teams to find the other group. Peter ( our Peter) however, does not allow Gwen to come along. Old Man Spidey also does not allow Cindy to come along for yet unknown reasons. Silk however, secretly follows anyway, against instructions.

The main team ( Peter, jacket spidey, Spider-UK, Mayday, Kaine, Miguel, Spider-Woman (Jess Drew) and Spider-Ham) finds Spider-Ock’s team. Ock is not impressed by their presence stating that they have cause their reading levels to go off the charts, nullifying his cloaking device he has been working on to hide from the inheritors.


He notes that Kaine and Silk have abnormally high reading levels that will certainly attract the inheritors. Old Man Spidey explains that they are special spider totems called The Other, and The Bride respectively.  Obviously, Old man Jacket Spidey is not impressed that Silk has sneaked through the portal, and our Spider-Man is shocked to see a physical version of the Superior Spider-Man beside him, still alive. Old Man Spidey also notes that his readings tell him that Superior Spider-Man is from 616. When questioned, Peter explains that Ock is from the past who got shoved into the future at one point. While everyone is taking this in, Miguel looks around and realizes that Ock was shoved into his future, forward to the year 2099 where they currently are. 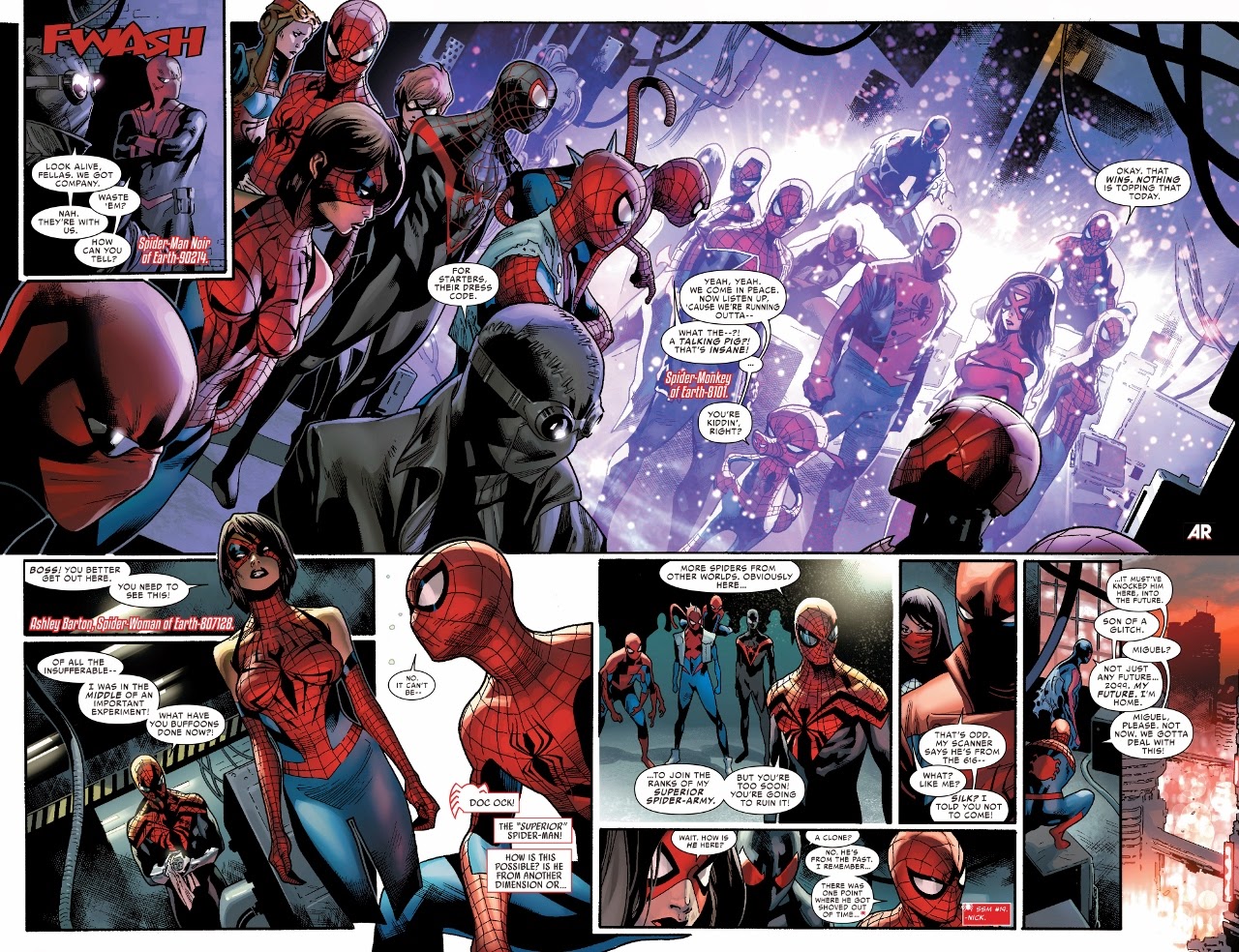 Just then, Daemos comes through the portal. Fortunately, Superior Spider-Man has been planning for his arrival and instructs his team to do as they have practiced. In the midst of battle, Cyborg Spider-Man is killed. Together, and with the help of Spider-UK’s team, they manage to kill Daemos. While these inheritors usually crumble when killed, Ock used 2099 tech to design a weapon that will prevent such crumbling of the body so they can study the body. Six armed Spidey and Lady Spider volunteer to help with the autopsy as they are specialists.

The Spiders are torn over whether or not it was right to have killed Daemos. Mayday however is not among them, wishing that it was her hand instead of Ock’s that delivered the killing blow. Ock’s readings however note that Kaine was the one who delivered the most damage to Daemos. 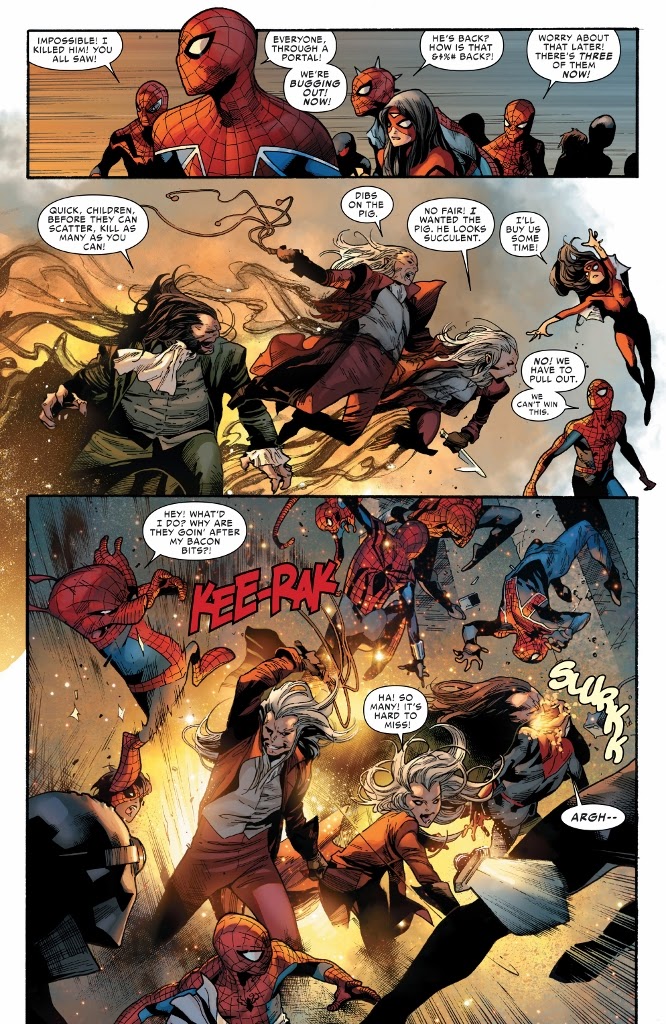 Ock also points out that Silk is the source of all the problems and wants to get rid of her. At this point, Old Man Spidey takes charge warning Ock to stay away from Silk. He states that while the rest of them are fumbling in the dark, he is the only one who knows what is going on here. Before he can finish his sentence however, he is killed by another Daemos, who has just entered the portal again, along with the twin inheritors.

This time, Assassin Spider-Man is killed in battle and the other Spiders scramble. The Superior Spider-Man is feeling less Superior after feeling dumbfounded as to how this other Daemos has appeared. Kaine, Ben, and Ultimate Jessica Drew (All clones) decide to go into the portal where Daemos came from to figure out how to stop the inheritors from cloning themselves.

All the other Spider-Men also flee into different portals ( I’m not sure where they came from).  Before our Peter leaves however, he is called by a dying Old Man Spidey, who turns out to be Ezekiel, from a world where Peter was killed by Morlun and Ezekiel got a Jacket costume made to carry on the work of Spider-Man. 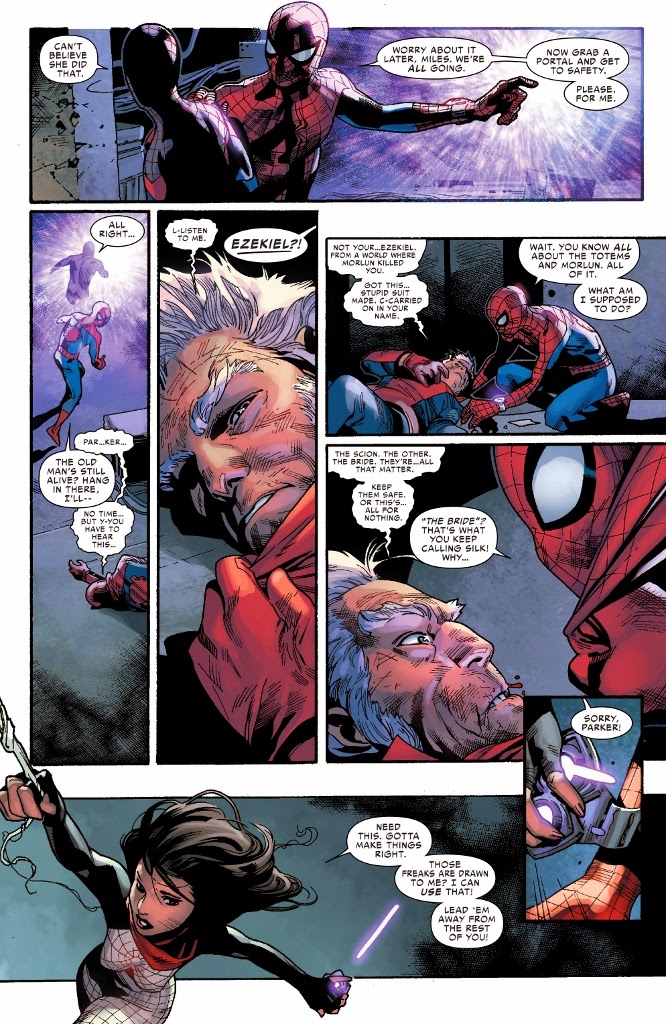 Ezekiel instructs Peter to keep the Bride, the Other , and the Scion safe at all costs as they are all that matter. Before Peter can ask any questions, Silk steals Peter’s portal opener, gets the attention of the inheritors and goes through a portal to distract them. As Peter is about to follow her through, Spider-Woman volunteers saying that he is needed where he is to lead the others. Ock also instructs Spider-Man Noir to go along and report back to him.

The inheritor twins chase after Silk, and Daemos goes to retrieve his old body, now in the hands of Spider-Man 2099. The rest eventually regroup back at the safe zone. While the Spider-Men are filling those who stayed behind on what had happened, Superior Spider-Man takes leadership instructing them to stop talking, stating that he is now in charge.

At this, our Spider-Man’s spider sense starts tingling!

Thoughts
This issue, focused a little too much on the Superior Spider-Man for an Amazing Spider-Man book. Peter barely contributed  to this issue at all.

As a Spider-Verse book however, I would have rated this much higher than the actual Spider-Verse #1 issue which was really quite boring.

While some people may be growing tired with Silk and her character, I found her to be quite amusing, carrying a very feminist vibe along with her character, wanting to do whatever she wants, refusing to be protected.

Daemos’ clone was not at all expected as was the quick death of Assasin Spider-Man, which really got no acknowledgement at all from the other Spiders considering the build up to his character from the Superior Spider-Man books. Even Cyborg Spider-Man’s death was more noticed.

I was probably most disappointed that Old Man Jacket Spider-Man turned out to be Ezekiel and not the actual Jacket Spider-Man from Amazing Spider-Man # 500 as I first thought. Nonetheless, this proves to be quite a twist adding more mysticism and superstition to the whole Spider-Man origin. I for one was never a fan of Ezekiel’s back story about the origin of Spider-Man, much preferring the traditional radioactive spider bite coincidence. Nevertheless, it appears that Ezekiel’s Spider-Man origin has been revisited in full force this time, quite likely to change the origin for real now.

It was great however to see that Kaine as the special one who has embraced the Other gained much attention and is now even among the three most important spiders!

Here in Amazing Spider-Man # 10, we also see more of Lady Spider, whom I did not notice before. Lady Spider was among the characters featured in Spider-Verse # 1, whose back story was among the more interesting ones.

Finally, I have to point out that mixing up earth-610 and 1610, was a really bad error that threw me off completely in my AmazingSpider-Man # 9 review. Having seen so many alternate Spider-Man, I automatically assumed that Lady Verna was chasing an alternate version of Miles and Jessica clone Drew ( that’s what I’m calling her now).

Over all a great story leading to lots of mini series’ that will be reviewed asap. Much apologies for these much outdated reviews. ( We are running short on help on the site here * Hint*) Cheers!