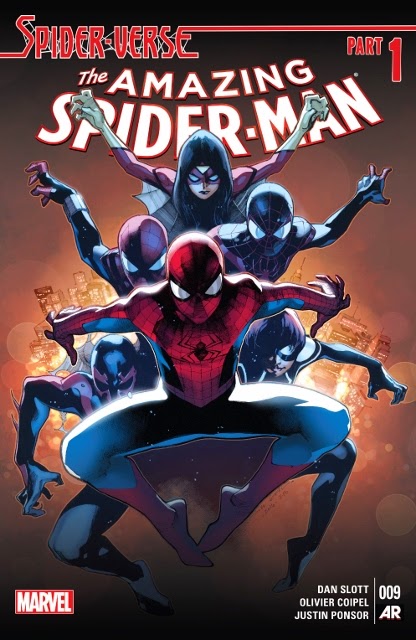 This story begins with Peter Parker of earth 449, who is actually living on the moon and still working for Jameson. Needless to say, this Peter is soon killed by Morlun.. as usual.

Over at the Loomworld aka earth 001, home of the Inheritors and the previous residence of the Master-Weaver as we read about in Superior Spider-Man # 33, Daemos and his sister await the return of Morlun. The inheritors have been travelling with the help of the now subdued Master Weaver.

Morlun's siblings taunt him about how he is afraid to face earth 616 after having previously died there. Morlun responds by saying that he is saving that world for last and warns the others not to touch that world before he does. Daemos however has no regard for his little brother's warning. 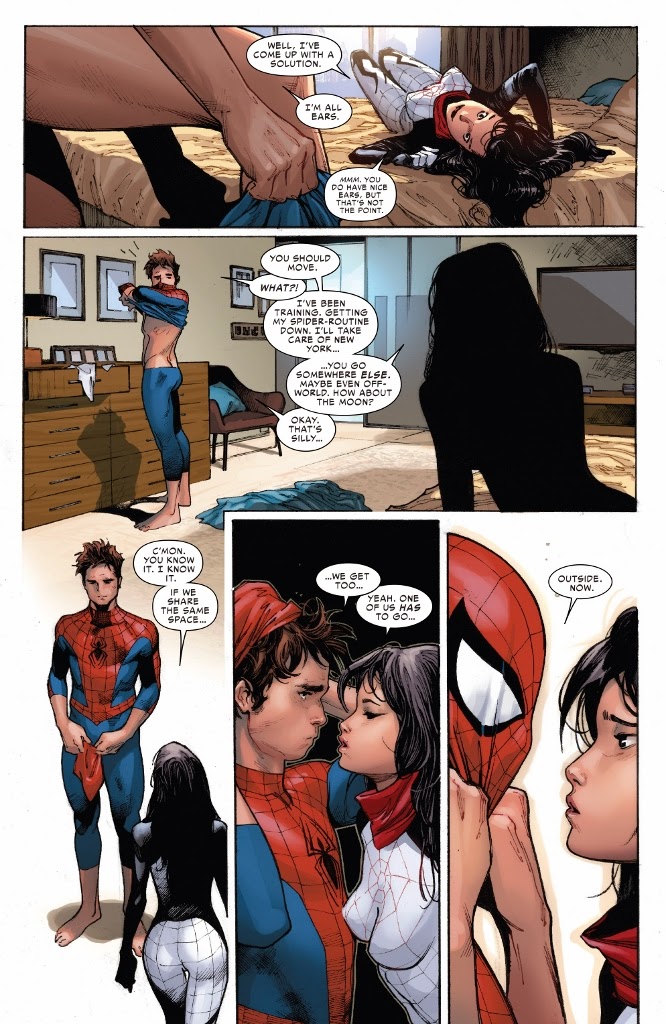 Back on Earth - 616, our Peter Parker is sleeping naked on his bed under the covers when Cindy, dressed in her new Silk costume appears to greet him, very playfully. She has come to tell him he should move out of New York and let her take over. Hoping to avoid their sexual attraction, Peter quickly changes into his Spider costume and asks Cindy to discuss matters outside.

As they swing outside, Spider-Man notices Spider-Ock's old spider squad using a spider tank to rob a bank. He and Silk stop the robbery. The spider squad are terrified to be facing two spider people and get even more confused when Spider-Woman ( Jessica Drew), Spider-girl ( Anya Corazon) Spider-Man 2099, Spider-UK, Mayday Parker ( the other spider-girl from MC2), and Spider Ham all appear.

Our Spider-Man gets a fright seeing so many versions of himself at once and even thinks it might be Mysterio. At that point, Mayday unmasks herself, having met Peter before, to convince him that this is all real. They have all gathered towards our Peter because he was the only one to defeat Morlun before. 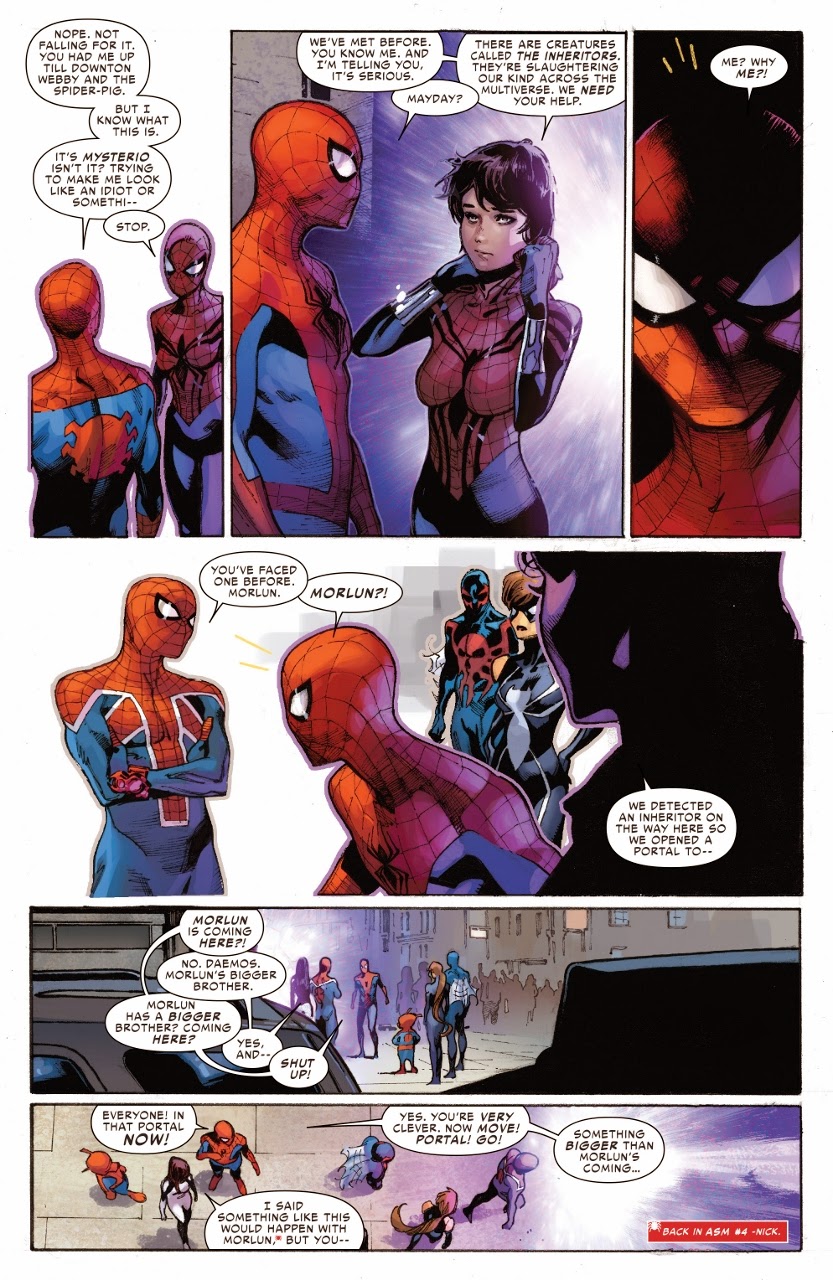 Spider-UK explains the situation and how Daemos is on the way to Earth - 616. The spider people all enter the portal to escape Daemos.

Elsewhere in Eastern Europe, we see Kaine aka the Scarlet Spider, defeated alongside his team members, the New Warriors. Daemos is about to kill him, but Kaine has one last fight in him left and stabs him with his stingers. 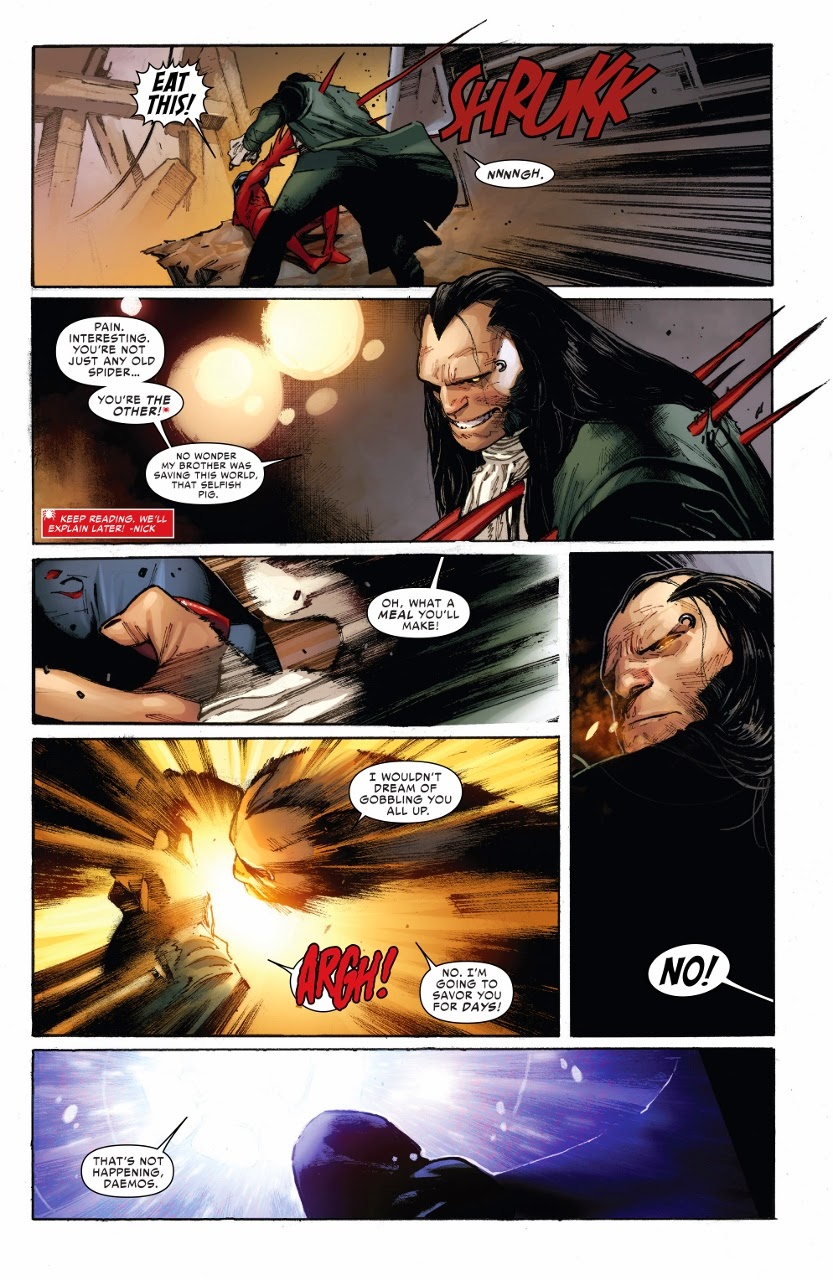 At that point, Daemos realizes that he is facing "The other," and finds it even more amusing. Before he can kill Kaine however, Old man Jacket Spider-Man ( My favorite version), Bruce Banner version of Spider-Man, Spider-Gwen, and a version of Ben Reilly arrive.

At first Kaine thinks that the Jackal  is behind the sudden appearance of these Spider guys and is hesitant to join them, but starts to believe them when he sees Ben Reilly and accepts that an explanation can wait. The team successfully save Kaine, but lose a fellow Spider-Man in the process - Bruce Banner.

The team regroups on Earth-13, an earth where the Spider-Man of that world remained as Captain Universe, thus making it a foolish move for the inheritors to dare face him. Unfortunately, the enigma force that makes him Captain Universe is limited to his dimension. If he steps into another dimension, he would just be another Spider-Man, helpeless against the inheritors.

Spider-Man meets all the others and slowly begins to process it slowly...up to the point where they mention that he is their greatest weapon since he is the greatest of them all! What!? 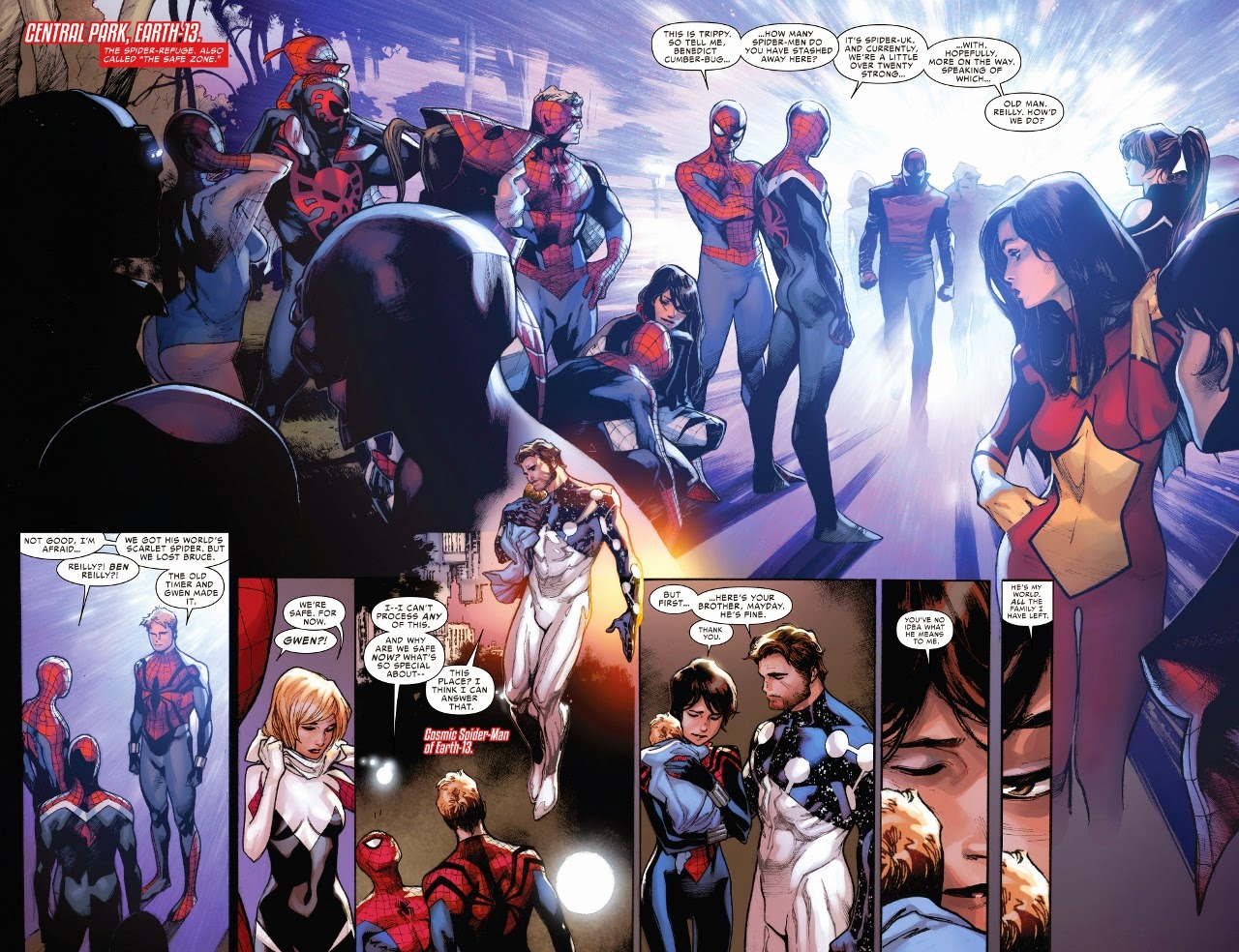 Elseworld, on earth - 610, (an alternate version of our Ultimate universe earth-1610?), we see Miles Morales, looking at his mother's grave when Jessica Drew ( the clone) of that world appears, giving him a speech about how they spiders have to stick together. Just then they are attacked by Lady Verna ( Morlun's sister) and her hounds.

The first scene of the epilogue is rather interesting as it takes place on Earth 001 aka Loomworld. Unlike what I am previously imagined, the Loomworld is just another world like the rest. It also has similar characters as the rest of the worlds.

In the first scene, we have some servants rolling barrels of wine to the inheritor's palace. The spokesperson for the inheritors and servant to Lady Verna is a "Ms. Drew," who references that a Dr Connors and "Thompson boy" met a fatal end due to displeasing the inheritors.

Inside, the inheritors are sitting at their dinner table with Bruce Banner Spider-Man and some others on plates. They are waiting for Lady Verna and Morlun to return, much to the protest of Daemos and the other younger inheritors who are already hungry.

The Father, Lord Solus, however is the one who calls the shots. Before the feast, he requests to know about the spiders they have caught and from what worlds they come from.

The twins from Superior Spider-Man # 33 fight over who's tribute is better and mention their episode with Karn in the process. Jennix, another of the inheritors, finds its interesting that the spiders are gathering as it has never happened before. Daemos however is already aware of the gatherings having encountered them previously already. He tells of how his intended prey - Kaine, escaped with the others. He also mocks Morlun stating that he almost had "The other" from the 616 universe. 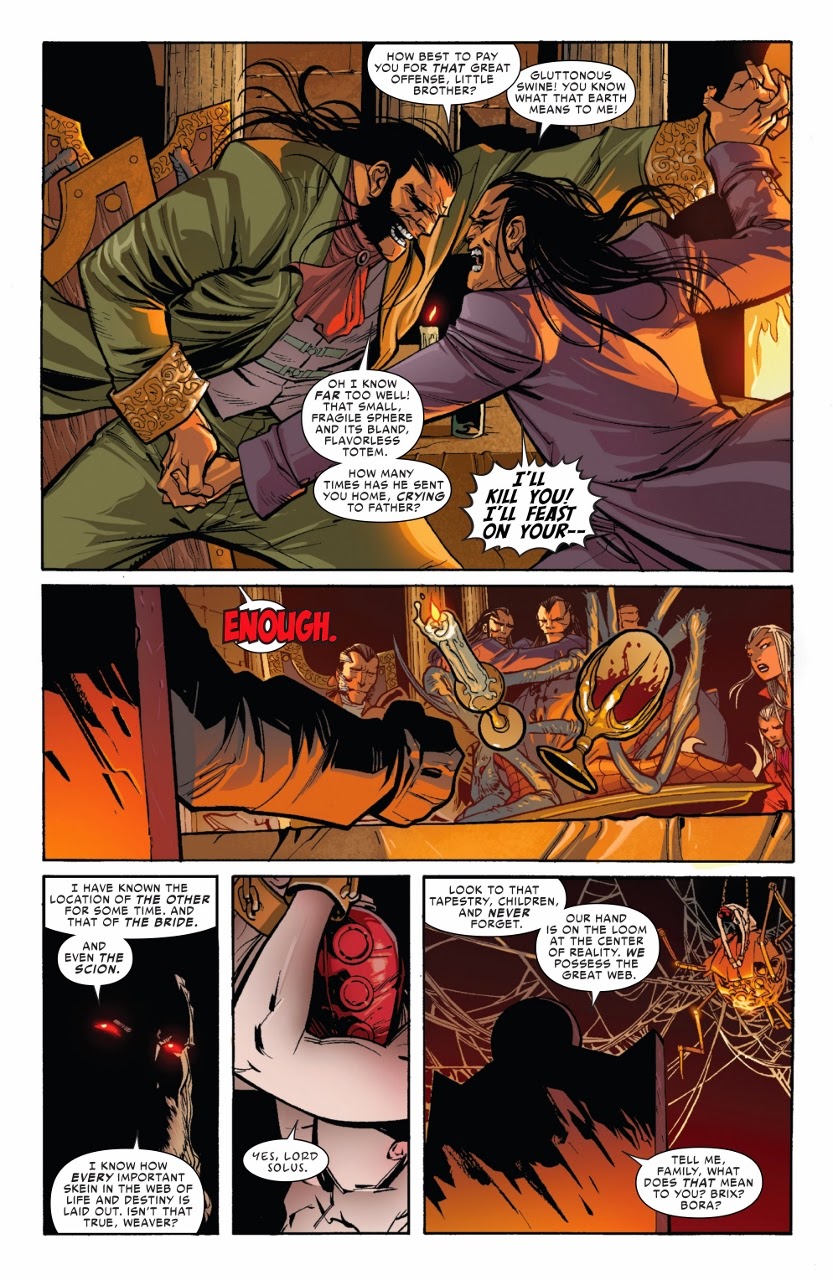 This causes an uproar at the table and Morlun and Daemos begin to fight, though they are eventually stopped by Lord Solus. Lord Solus explains how he has already known the location of The others, the Bride, and the Scion for some time, thanks to the knowledge of the Master Weaver at his side.

After a little more chit chat about the great web and its meaning, the inheritors begin their feast... without Lady Verna for some reason. Probably the most important part of their dinner conversation was the knowledge that Morlun is to take over the crown, despite Daemos being the eldest. We also see that Jennix seems somewhat unhappy at the table during the feast.

Starting from the bottom up ( excluding the epilogue), Miles Morales of earth-610 will probably either die or be saved by Spider-UK's team in my opinion. So far we've never heard of an earth -610, so seeing that this is not the Miles we usually know, he may just die.

His significance up to this point is still unknown. Moving further back, the introduction of Captain Universe was pretty cool and it made much sense to use his world as a safehouse. Up to this point, the interaction between the different spiders are not highlighted too much. Kaine seeing Gwen and Ben was pretty cool. I will be looking forward to Kaine having a proper meeting with his Peter Parker however to make amends, especially after his last encounter with Spider-Ock.

Bruce Banner Spider-Man was not at all expected. Thankfully it was him who was taken by Daemos instead of Kaine. The loss of a new character is never felt as much as that of an old one who's story we've been reading for years.

While Kaine would probably belong more in Ock's team, I am glad that he was picked up by the "better good guys." Considering his view on life and his last meeting with "Spider-Man," joining Ock's team may very well turn him back to his older ways.

Being picked up by old man jacket Spider-Man and brought into the same team as the real Spider-Man would definitely be good for him.

As for the comical gathering of Spider guys at the spider squad's bank robbery, our Spider-Man was certainly as shocked as the spider squad. Peter also realized that Cindy was not kidding when she said that there was a primal instinct to come find him, even more primal than her usual attraction.

One thing that bothers me slightly is why Jessica Drew, Anya, Kaine and pretty much every "spider" in the 616 universe is present, but only the main Spiders of the other worlds are present.

Morlun, though trying to put on a tough show in front of his family is actually terrified of the 616 universe. It is highly likely that the end of the inheritors will be a result of family conflict with one another, and having almost nothing, or very little to do with the spiders. At the dinner table alone there were two conflicts, one involving the younger siblings and another between Daemos and Morlun. To top this off, Jennix seems unhappy at the table, and Lady Verna is not even present, still hunting Miles of earth - 610.

Lord Solus' face is somewhat always in the shadows. I'm not sure if it was intended to show superiority, or if it is because he is going to be someone we are quite familiar with, like Ezekiel for example... though highly unlikely.

Finally, I would also like to comment on how queer it is that Ms Drew, quite likely the equivalent of Jessica Drew of the Loomworld, is working for the inheritors. Dr Connors and Flash Thompson of that world are dead, which leaves me to wonder what of the Spider-Man of that world?

Furthermore, in my review above, I forgot to mention that the "hounds" belonging to Lady Verna went by the names Sable, Fireheart, and Kravinoff, who somewhat resembled Silver Sable, Puma (Thomas Fireheart) and Kraven the hunter.

Overall a great start to the Spider-Verse story, leaving the readers wanting to find out more as soon as possible.

EDIT- after reading Amazing Spider-Man # 10, I've concluded that there is no Earth 610 and that it was actually a typo on the part of the Editors. Miles in this issue was meant to be the Miles we know of the Ultimate Universe, Earth-1610.