Guardians of the Galaxy #16 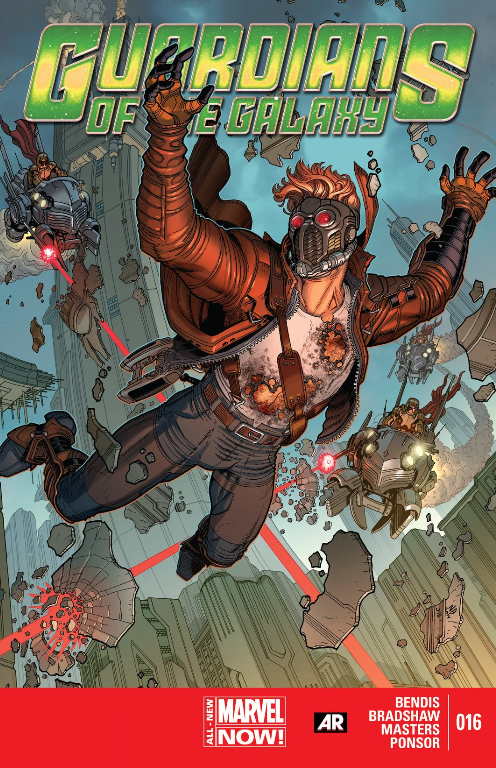 Hello everybody and welcome to my review of Guardians of the Galaxy #16. Y'know, I'm wondering whether there was a mix-up with the covers for this and the previous issue.

Flash Thompson awakes to find himself a prisoner on-board a Skrull ship, with the Venom symbiote held in a nearby container. Flash is greeted by one of the aliens, who asks him questions in English regarding his "pet symbiote", asking him if it ate his legs, if he knows where it came from and what it's worth. All Flash can do is ask where the rest of the Guardians are. 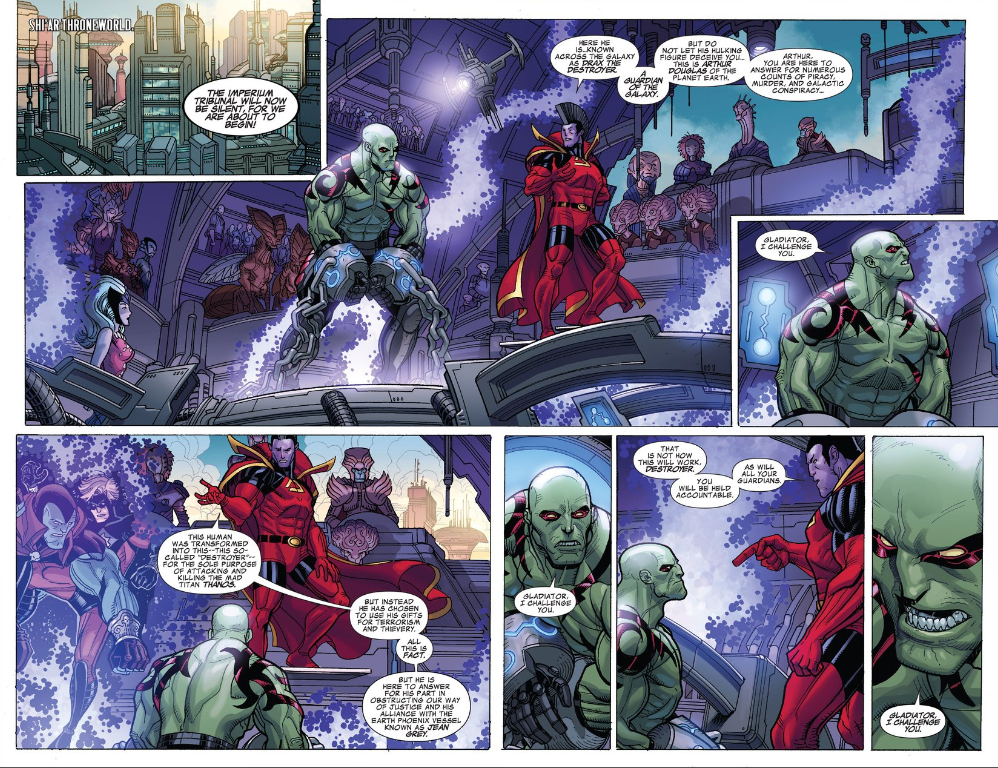 As if to answer the question, we then cut to the Shi'ar Throneworld, where Drax the Destroyer's trial has begun. Gladiator recounts Drax's origin to the Imperium Tribunal, that he is actually the human Arthur Douglas, who was transformed into his current state for the sole purpose of killing Thanos. According to Gladiator though, Drax has instead chosen to use his gifts for terrorism and thievery, but what he is here to answer for is his alliance with Jean Grey and his "obstruction" of their way of justice. Drax repeatedly challenges Gladiator to combat, but is told by the Shi'ar praetor that that is not how this will work, and that he and his fellow Guardians will be held accountable. Drax's response? "GLADIATOR, I CHALLENGE YOU!" (points for persistence) 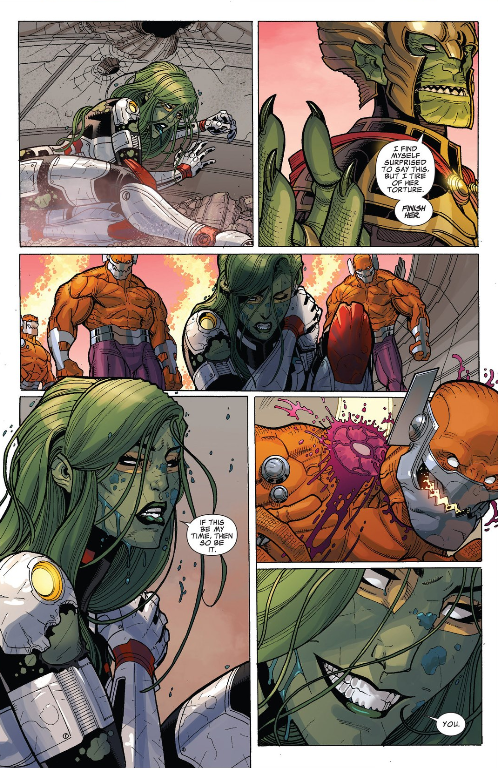 Elsewhere, on Planet Moord, Gamora is still being asked where her father, Thanos is by one of the Badoon rulers. Her "punishment" is being shown across the whole planet and to anyone else in the galaxy who wishes to watch, as a message to those who would challenge the Brotherhood and their way of life. Gamora refuses to give in however, continuing to fight even as she is slowly beaten into submission. The Badoon leader eventually tires of watching and orders the cyborg slaves to finish her. Gamora faces down her would-be executioners, saying that if this is her time, then so be it. Before the slaves can strike a killing blow, one of them is suddenly beheaded. Who is the beheader? None other than Angela, The Tenth Realm Heven's finest warrior and Thor & Loki's secret sister. She remarks that presenting Gamora's beatdown to the universe for someone like her to watch and folow probably wasn't the Badoon's best idea. Gamora tells Angela that she'll be right back as she makes for the Badoon leader, who attempts to flee whilst Angela tosses a sword to Gamora. 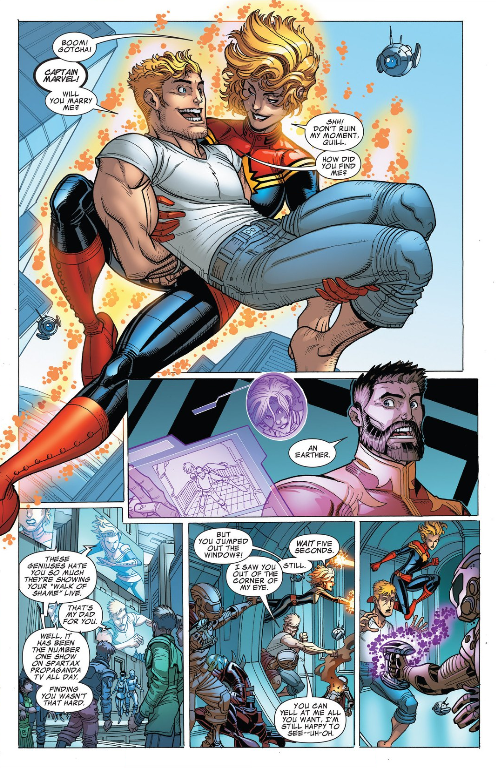 On Planet Spartax, King J'son's aide tells him via intercom that his son, Peter Quill, has just leapt to his death. Shocked, J'son exclaims that he doesn't want the entire galaxy watching his son fall to his death. But it seems Star-Lord was one step ahead of them all, as he's soon rescued by Captain Marvel, who was able to find him the same way Angela found Gamora and who Peter saw out of the corner of his eye before he jumped. Star-Lord also asks Captain Marvel to marry him, but she urges him not to ruin her moment as the pair fight their way through the Spartax Royal Guard. One of the guards happens to be carrying Peter's element gun, which he foolishly attempts to use on him, not realising that it's only set to Peter and no-one else. The resulting backfire kills the guard and Peter retrieves his weapon. Carol suggests they grab Peter's things and leave, but Peter has other ideas, asking his fathers aide at gunpoint where the rest of the Guardians (and his pants) are. At this point, J'son enters the room and orders his son to stand down, claiming he is desecrating his bloodline. Peter responds that he isn't the one who kidnapped his son and called it justice, but J'son says that he feels nothing but pity for Peter because "this fate is of your own choosing". He then adds "my only regret in this life is that the Badoon that tried to murder you as a child failed so miserably". After a moments silence, Peter questions if that is really his fathers biggest regret, that his enemies didn't kill his own son "because today I'd think it would be the cameras". 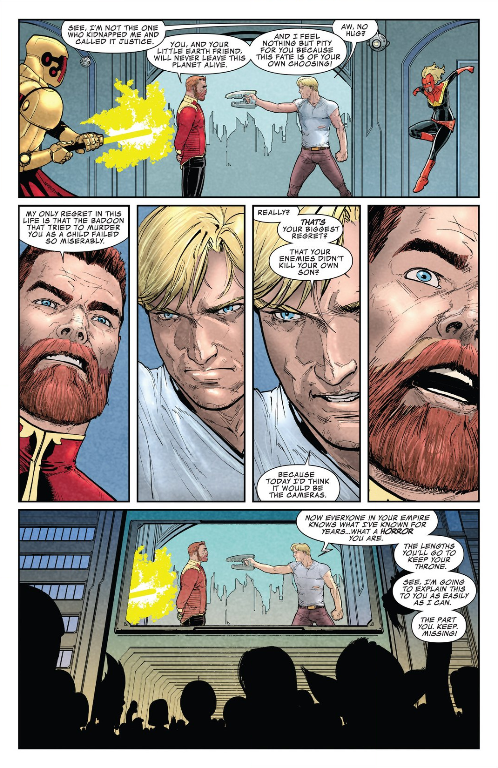 Yep, J'son has just put his foot in it big time by basically telling the whole galaxy that he wished the Badoon had killed his only son. Peter tells him that now everyone in his empire knows what he's known for years about his father and the lengths he'll go to keep his throne. He then explains to J'son what he keeps missing, that he can call the Guardians whatever he likes, but to the rest of the galaxy, the Guardians are the good guys, because they actually go out of their way to help people who can't help themselves, "and if you abuse of running this empire to kidnap us, attempt to murder us, to torture us...us who would do anything for the people you stomp on...then what does that make you? What do you call the guy who tries to kill the good guys?" Watching this speech, the Supreme Intelligence contacts it's Kree scientists, telling them their experiment is over and to put the specimen (Rocket) back together. One of the scientists questions this, saying that they thought the specimen was theirs to keep, but the Supreme Intelligence answers that things have just changed, and they have learned everything they need to know here. 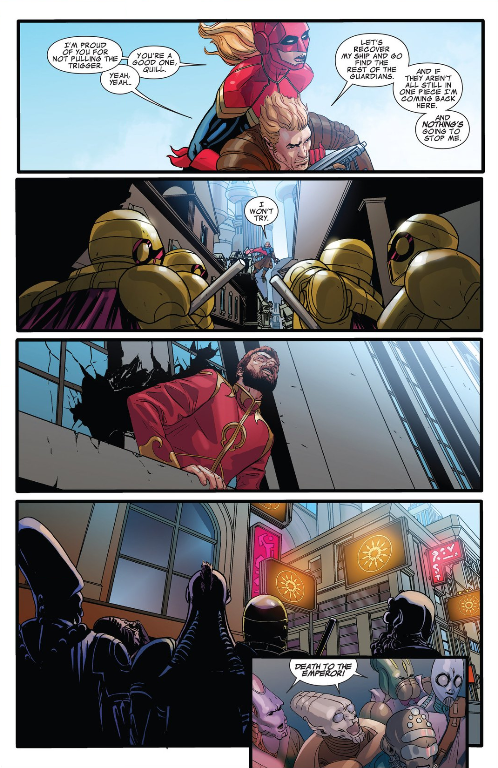 Having said his speech, Star-Lord demands his father tell him where the rest of his team mates are. J'son simply responds that the Guardians are "where they belong", and suggests that Peter should put down his weapon if he doesn't plan to use it. Peter keeps the weapon trained on J'son, despite Carol's protests, saying that J'son really shouldn't have said that thing about him and his mother. J'son replies "maybe not, but you frustrate the #@$% out of me boy". He closes his eyes, anticipating the kill shot, but when he opens them again, Star-Lord and Captain Marvel have gone. As she carries him away, Carol tells Peter she's proud of him for not pulling the trigger. Peter remarks that if the Guardians aren't in one piece when they find them, then he's coming back, and nothings going to stop him. Carol replies that she won't try. While J'son watches them fly away, the crowds below start chanting "DEATH TO THE EMPEROR!"

Back on the Skrull ship, one of the Skrulls is preparing to bond with the Venom Symbiote. Flash advises them not to do this, but the Skrulls ignore him, heavily hinting that they will kill him once the bonding is complete. They then open the container and release the symbiote onto the chosen Skrull. At first it seems to go well, with the symbiote even taking on a Skrull-themed appearance. But soon after it starts attacks and kills most of the skrulls before re-merging with Flash. The sole surviving Skrull, the same one who initially merged with the symbiote, grabs his weapon as Venom snarls at him "I WARNED YOU".

On the Throneworld, Drax's trial reaches a conclusion. The Imperium Tribunal's psychic verdict is unanimous, the sentence is death. However, Drax is allowed to choose the form of his destruction. He chooses a fight to the death and once again challenges Gladiator, who finally accepts the challenge... 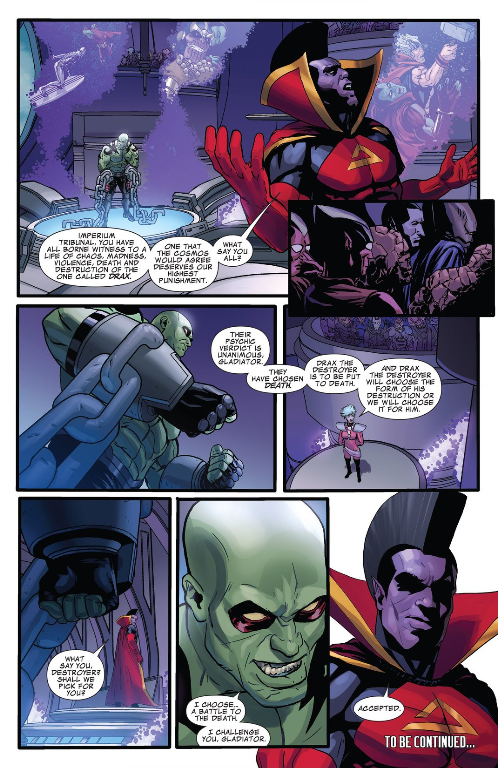 In my review of the last issue, I noted how, despite the fun character moments and dialogue by Bendis, the actual plot of the story-arc had kind of stalled. Well that's no longer a concern here as Bendis picks up the pace in this issue whilst still retaining that same fun stuff, with plenty more violent action to boot. 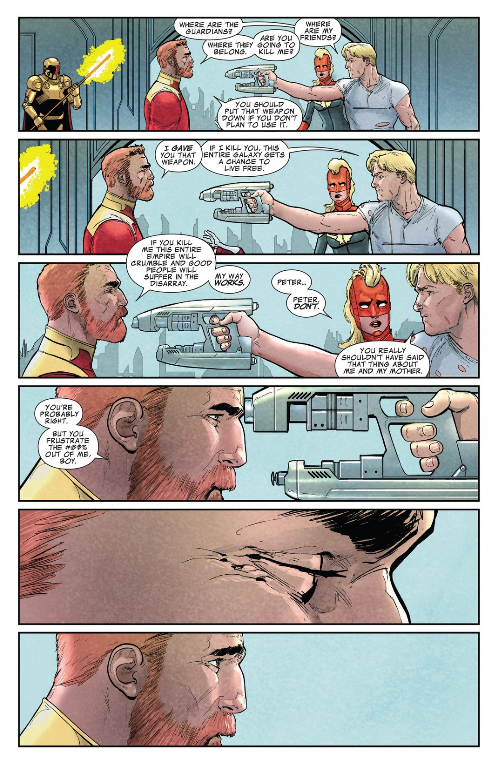 The stand-off between Peter and his father was long overdue and the end result is quite satisfying. Despite some unsavoury tactics now and then, J'son has never come across as a truly bad person, and I think that's largely to do with how he was presented in the Point One issue that began Bendis' run. In fact, sometimes Star-Lord has seemed overly harsh on his dad, but J'son's cruel line about his only regret being that the Badoon failed to kill his son proves that Peter was right about him all along. I'll be interested to see what role J'son plays in this series in the future as right now, he's looking very much like a sociopath, which I'd say makes him an effective villain (the Star Wars parallels continue to abound) since most of the baddies of the Marvel U tend to be more overt.. He's referred to as the former emperor of the Spartax Empire in Peter Quill's solo series Legendary Star-Lord, so that certainly gives him motive to seek revenge on Star-Lord and the rest of the Guardians, though there is the possibility he could seek redemption and join up with the team, but that's doubtful. I also loved how Peter's speech to his dad unnerved the Supreme Intelligence enough to release Rocket. It really helps to cement the Guardians as a force to be reckoned with in the Marvel Universe. Venom also benefits from this issue, though it's mostly from the hints that are dropped by the Skrulls about the symbiotes origin (setting the stage for Bendis' forthcoming Planet of the Symbiotes arc). I like how Bendis plays with our expectations regarding the Skrull bonding with the symbiote in what I'm sure was a subtle wink to Superior Spider-Man. I was admittedly a bit worried that the Skrulls would succeed in their plan, so having it blow up in their faces was quite satisfying. We also got a surprise appearance from Angela in this issue, which I was particularly pleased about as it looked like she had left the team right before I started reviewing this book. Drax's trial by the Shi'ar continues to provide some comic relief. Drax already knows that these guys are going to hand him the death sentence by the start of the trial and he isn't fazed at all. As well as being pretty badass, that says a lot about his character, and the final panel of Gladiator accepting his challenge of a fight to the death was oddly satisfying. You just know that Drax is going to walk away from this one.

For this issue, Nick Bradshaw is joined by David Marquez (who I've been phrasing for his work on Ultimate Spider-Man) on art duties. As you'd expect, both acquit themselves brilliantly here. This is Bradshaw's best work on the series so far. Much like her "first appearance" in Age of Ultron #10 and Gamora's entrance in Guardians #1, Angela's introduction in this issue sums up her character perfectly as well as being incredibly badass. Bradshaw also does a great job showcasing the characters emotions, from Gamora's weary acceptance of her fate to Peter Quill's comical reaction to his rescue by Captain Marvel. Marquez's art is somewhat lighter than his usual work on USM, but it works here because the transition between his and Bradshaw's respective styles is more seamless. His rendering of Peter's face after his father's venomous remark is brilliant, though the horror-esque portion of the Skrulls and Venom is another artistic highlight. Now we all know what a Skrull bonded with a symbiote looks like, and it was ugly! 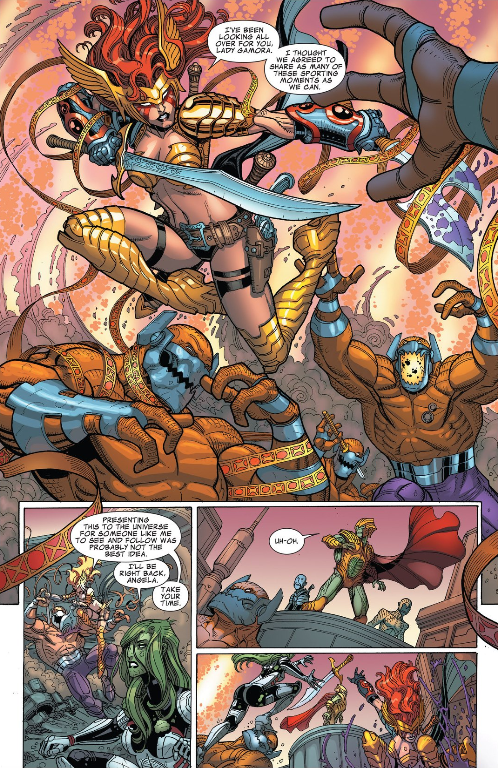