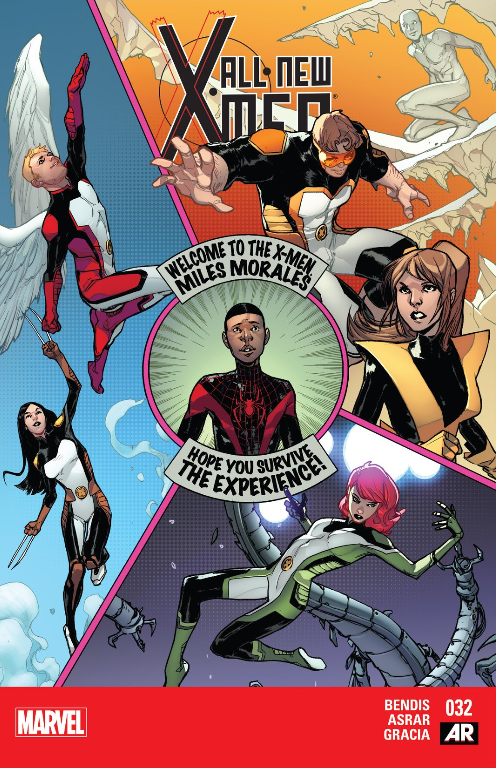 Hello everybody and welcome to my review of All-New X-Men #32. Last time we were here, the already time-displaced original X-Men had been transported into the Ultimate Universe by a newly revealed mutant.Where have each of them ended up, what will they find there and what will Jean make of this universe's Spider-Man, Miles Morales? Let's take a look and find out. 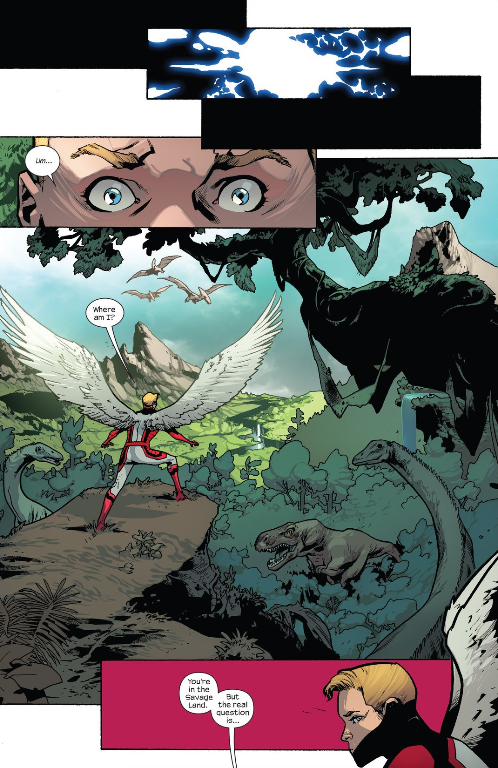 Transported to the Ultimate Universe, Angel finds himself in a strange jungle filled with dinosaurs. Wondering aloud where he is, Angel finds his question answered by a young man resembling Wolverine (his son in this universe, James "Jimmy" Hudson Jr.) who tells him he is in the Savage Land, but the real question is "who the hell are you supposed to be. Angel responds with a couple of jokes about the insanity of the situation while Jimmy asks his name. When he angrily repeats the question, Warren decides to literally take off, but by then Jimmy has already deduced who he is talking to and that this is not the same Angel who worked with his dad. Having Warren's scent, he takes off after him.

Elsewhere, Hank McCoy materialises underwater, frantically heading to the surface whilst being pursued by a pair of sharks. On the surface, a young couple have their romantic interlude cut short when Beast emerges from the water, asking if they could tell him where he is. The couple however are foreign and do not understand him, though their dialect leads Hank to assume that he's been transported to Turkey.

X-23 meanwhile appears during an American football game right in front of the charging players! On instinct, she throws one to the ground, apologising whilst the other players yell at her to get off the field. Another one grabs her on the shoulder, again causing Laura to react by instinct, unsheathing her claws, which causes the men to recoil in horror and flee, along with everyone else in the stadium while X-23 stands perplexed. 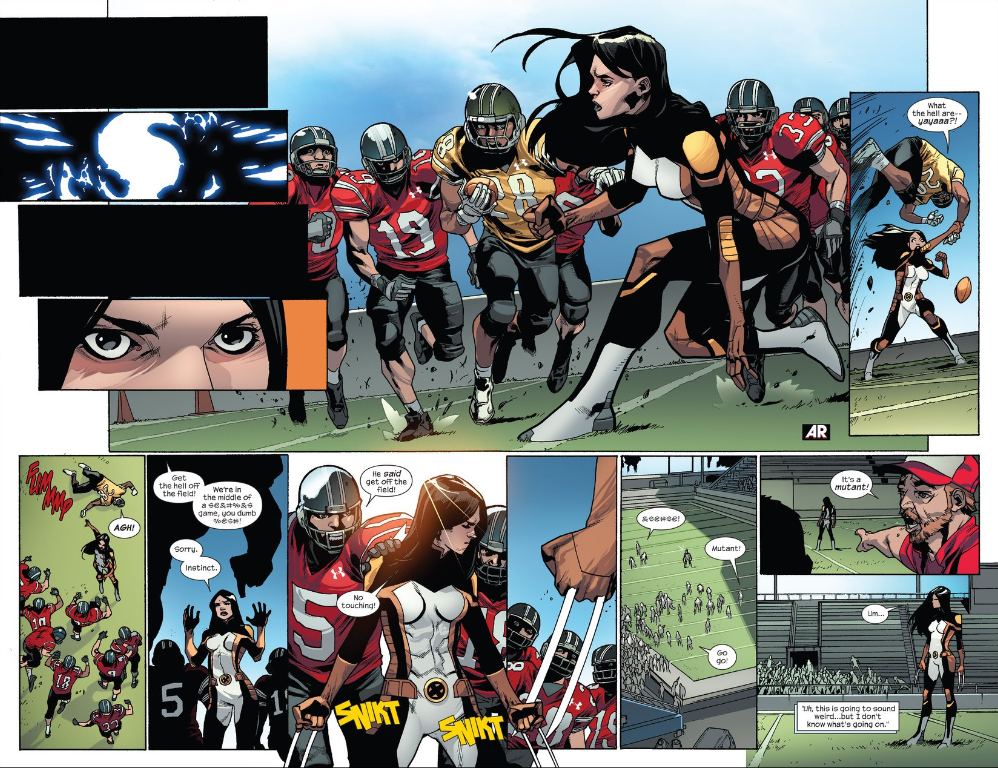 Underground, Iceman tries to explain what just happened to him to the Mole Man and his army of Moloids (who are distinctively uglier than their mainstream counterparts), as well as asking if he is even on Earth. The Mole Man informs Iceman that he inside the Earth and instructs his minions to grab the young mutant, who tries to hold them off with his powers, but is quickly overwhelmed. 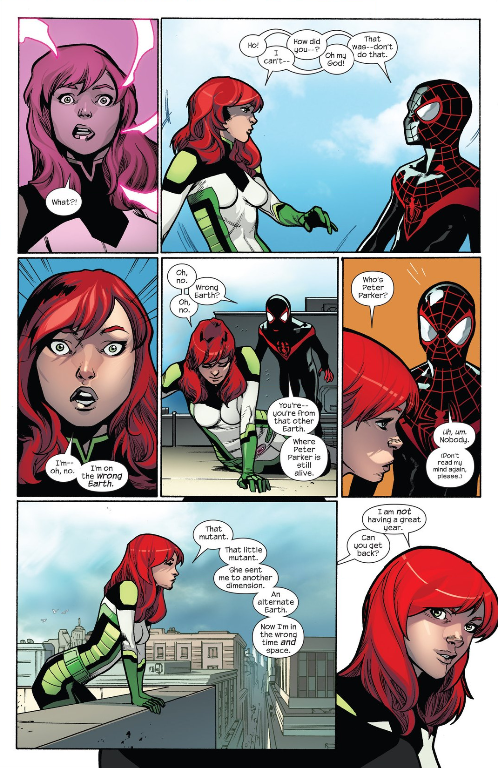 Back in New York, having come face to face with the Spider-Man of the Ultimate Universe, Miles Morales, Jean Grey is naturally confused. She wonders aloud for a moment if she has unlocked another secret part of her powers (as she did in the recent crossover with the Guardians of the Galaxy when she was kidnapped by the Shi'ar Imperial Guard). Miles and Jean attempt to introduce themselves to one another, but they both become confused as each mistakes the other as their universe's version of that person (this isn't weird to type about at all). Jean eventually decides to read Miles mind (with his permission) so she can get her bearings and witnesses his history as Spider-Man so far. This of course causes Jean to realise that she's on the wrong Earth, much to her despair. Miles realises that this Jean Grey is from the same universe where Peter Parker is still alive, which he makes the mistake of mentioning out loud, leading Jean to ask who Peter Parker is (is it possible that she's going to figure out Spider-Man's secret identity?) at which point Miles just sweeps the comment under the rug. Jean realises that the young mutant the X-Men attempted to recruit is the one who transported them all here, noting that she's now in the wrong time and space. She then remembers from reading Miles' mind that he's been to her Earth. Miles says he knows how to get her back there and offers to show her where that lovely little escape ticket is.

We then briefly cut back to X-23, who is being pursued by the local authorities on a motorcycle down a motorway. After noticing in her right wing mirror that one of the police officers is about to fire, she forces the bike to the right of the bridge and leaps off, noting that "this is going to hurt". "This " turns out to be the roof of a passing school bus, which Laura bounces off before landing and embedding her claws in a truck trailer in the opposite lane. She climbs onto the roof of the trailer. 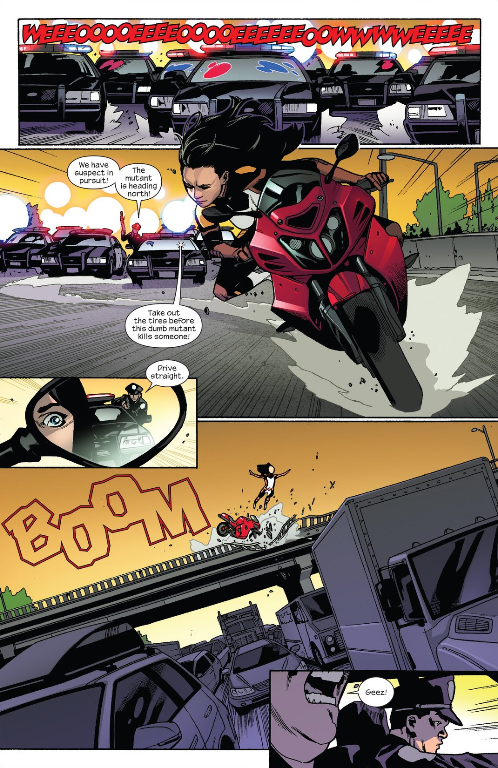 In "Turkey", Beast is trying to find someone who speaks English in a nearby town. The locals aren't much help though, merely taking pictures and noting that he is both an American and a super hero. One of the locals gets Beast's attention though when he says that super hero's "don't come here" as they die. Before Beast has a chance to fully understand what the man is saying, he notices a robot approaching him that's modelled after a certain facially-scarred, megalomaniac doctor. More and more of them arrive, which leads Beast to realise that he's not in Turkey, but in Latveria.

As they head towards the whereabouts of the portal, Miles warns Jean that the S.H.I.E.L.D scientists there are probably going to "nerd out over you", though she assures him that she has a way to calm that down. They find the warehouse deserted however and the  portal gone. Amadeus Cho enters the building, informing them that the tear closed and the government pulled the plug on the project as a result, leaving all of his work incomplete. Miles tells Cho that Jean needs to get home, adding that she's from another dimension. Cho requests some blood and urine from Jean, but adds that, unless she knows of another rip in space that leads to her specific dimension, she'll have to get used to the fact that she's stuck here as it would take years, maybe decades before they can figure out how to get her back home... 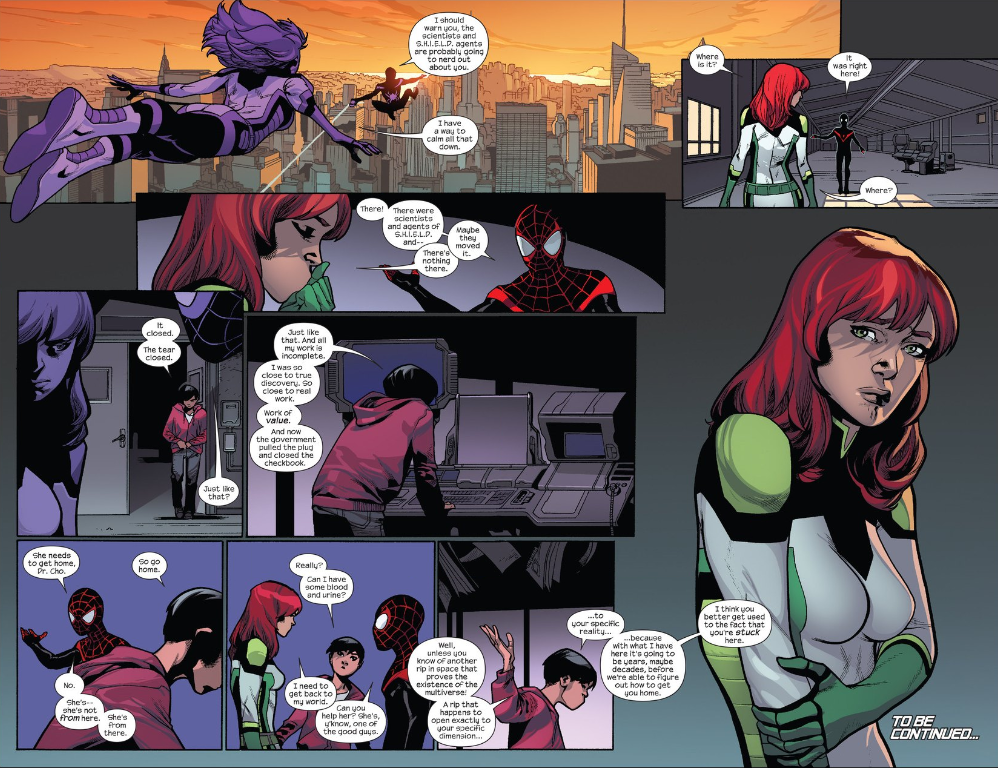 For the second part of our little multi-dimensional crossover, Bendis takes a similar approach to what he did with Guardians of the Galaxy #15, spending most of the issue showing us where the X-Men have ended up in the Ultimate Universe. What makes it work slightly better here is that the Ultimate Universe is new territory for these X-Men and through their interactions with it's various inhabitants, the plot is able to progress forward rather than slightly stalling as it did with the Guardians issue. 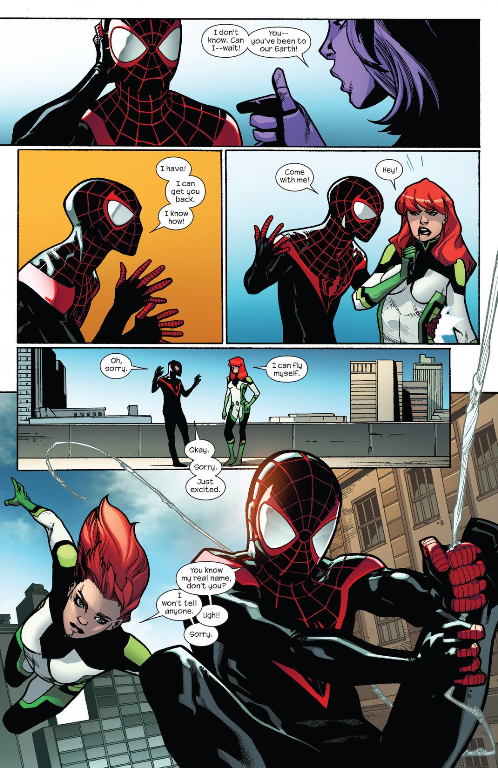 Jean Grey's interaction with Miles Morales was probably the highlight of the issue. It was funny to watch them getting their wires crossed over recent events before Jean decided to read Miles' mind, which was also a really good moment as it showed just how much Miles has been through since he first became Spider-Man. I mentioned before that it's possible this storyline could end with Miles travelling to Earth-616 with the All-New X-Men as part of the set-up to Spider-Verse. Elaborating on that, having this arc end like this would be beneficial to the crossover, as with Ultimate Spider-Man, Silk, Scarlet Spider, Spider Woman and Spider-Man 2099 all in the same dimension as him. the Amazing Spider-Man would have his own team of spiders to meet up with the time-displaced Superior Spider-Man and his group, not to mention the newly introduced Spider-UK (British Spider-Man = AWESOME!) and the web-heads he's recruiting. Let's face it, that would be a pretty awesome splash page, especially since Olivier Coipel is the artist working on Amazing Spider-Man for the crossover. Perhaps the Ultimate versions of Jessica Drew and Peter Parker will also follow Miles into 616, though we've yet to see if the latter will be "sticking" around. 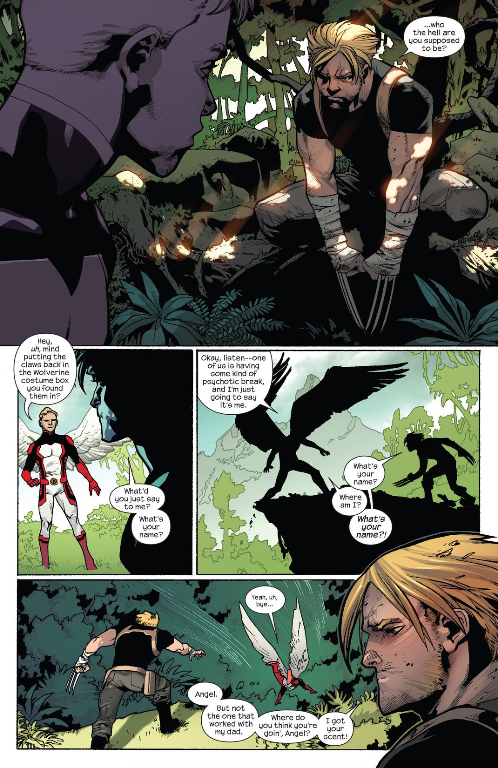 As for the rest of the X-Men, Bendis has made a smart move in scattering them across the planet, meaning our protagonists will get to experience a lot more of this world than Peter Parker did in Spider-Men. Angel meeting up with Jimmy Hudson also means we'll be getting somewhat of a meeting between the mainstream and Ultimate X-Men. It'll be interesting to see what the former will make of the fact that in this universe, mutants were created artificially, not to mention that they were nearly hunted to extinction by the human race. I was rather pleased that Beast wound up in Latveria as this will no doubt lead to a confrontation with Ultimate Doom, who may or may not have goat legs (I'm not really familiar with Ultimate FF), and X-23 provides some entertaining action sequences. Iceman's segment is the weakest as it could have been inserted into the previous issue, though I could wind up taking that back after the next couple of issues.

Mahmud Asrar's artwork is a definite improvement over the previous issue. For starters I like the cover's homage to Uncanny X-Men #139. Asrar packs a lot more detail into the characters and the action and layouts look dynamic. The aforementioned scene where we see Miles' history as Spider-Man works as well as it does thanks to Asrar. There are still parts that lack some polish, but they're few and farbetween. Overall, this is another solid chapter in this unusual team-up... 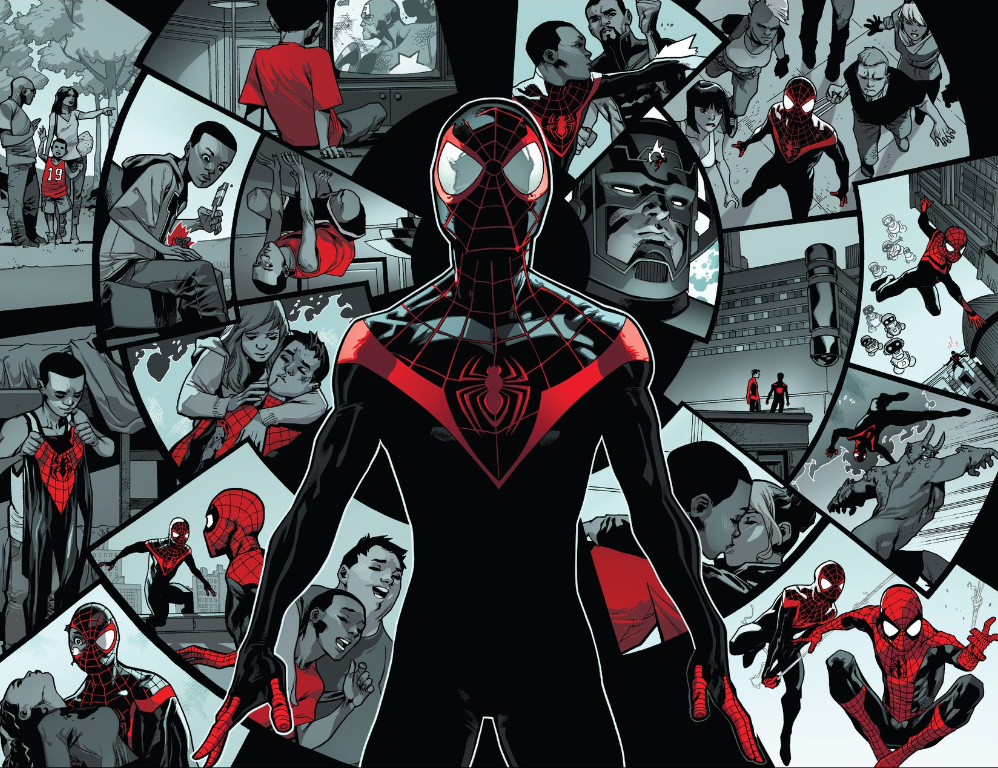