There are two stories in this issue, only one that we actually want to read about ( the second). The first story pretty much has Peter and Cindy, unable to keep off one another once again, having to be stopped by Ana Maria. Ana Maria decides that if the two spider people are going to be acting like dogs in heat, then she will treat them as such, splashing water on both Peter and Cindy whenever they start getting frisky. 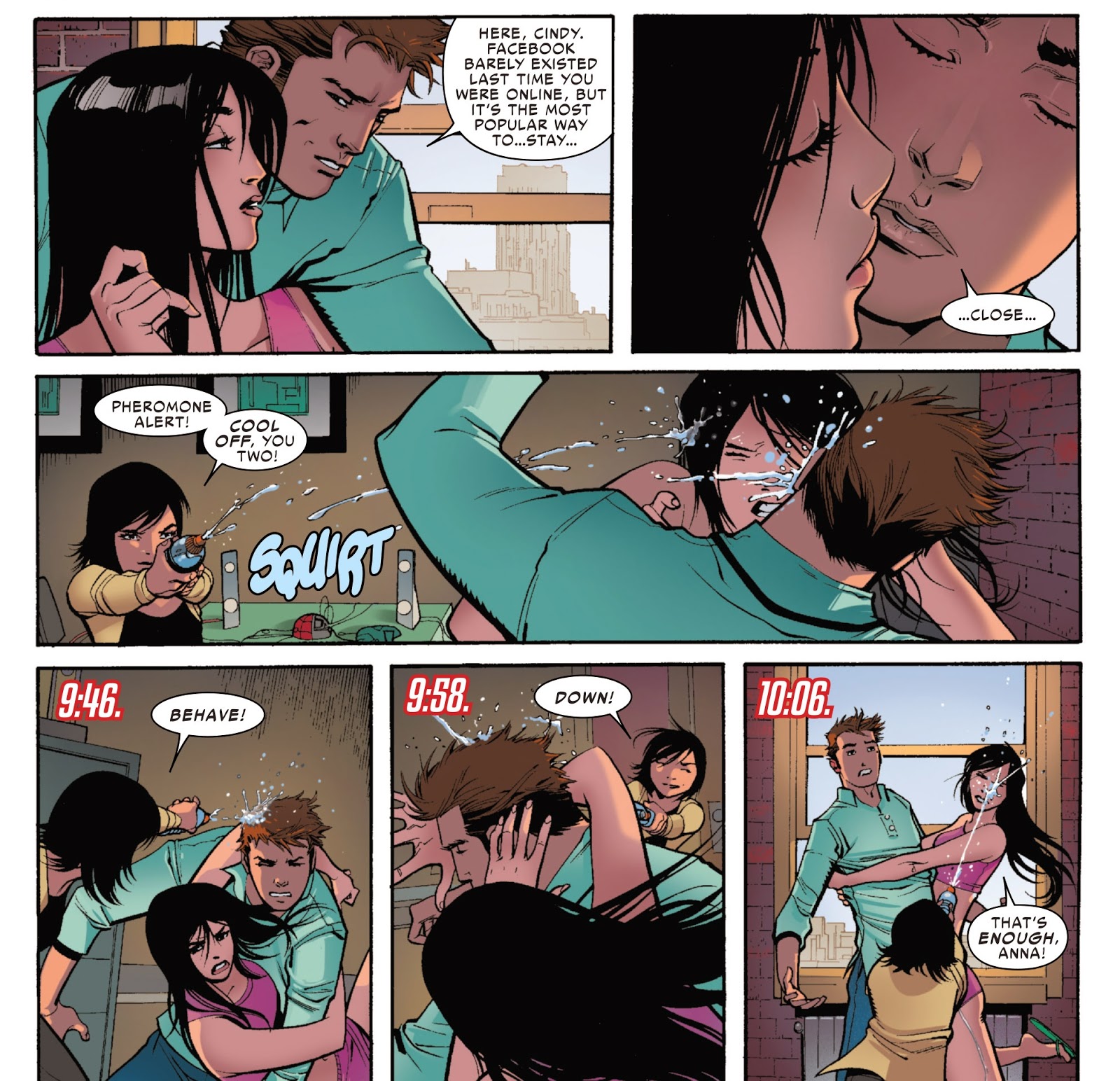 Cindy eventually decides that it is for the best that she leave Peter’s apartment and find a life on her own. Ana Maria then has a little talk with Peter about how he should handle crime a little more like how Otto did – leaving the petty crimes to the cops and local authorities.

She tries to bring him to realize that he has a responsibility to run his company now, a responsibility where people’s jobs are at risk if he does not do his job right. Peter realizes that she is partly correct, but quickly swings out the window when he hears that there is a costumed villain on the loose.
Over at the crime scene, a blue villain dressed in the original Ms Marvel’s original costume is running lose assisting in a crime. Some Ms Marvel fan bystanders snap photos to go viral, informing the public that its not really Ms Marvel, but a crook dressed as her.

Meanwhile elsewhere, we see the new Ms Marvel (Kamala Khan) at school. She is having problems juggling real life and superhero life as most costumes do. She gets the viral message about this fake Ms Marvel flying around and decides she has to fix it. 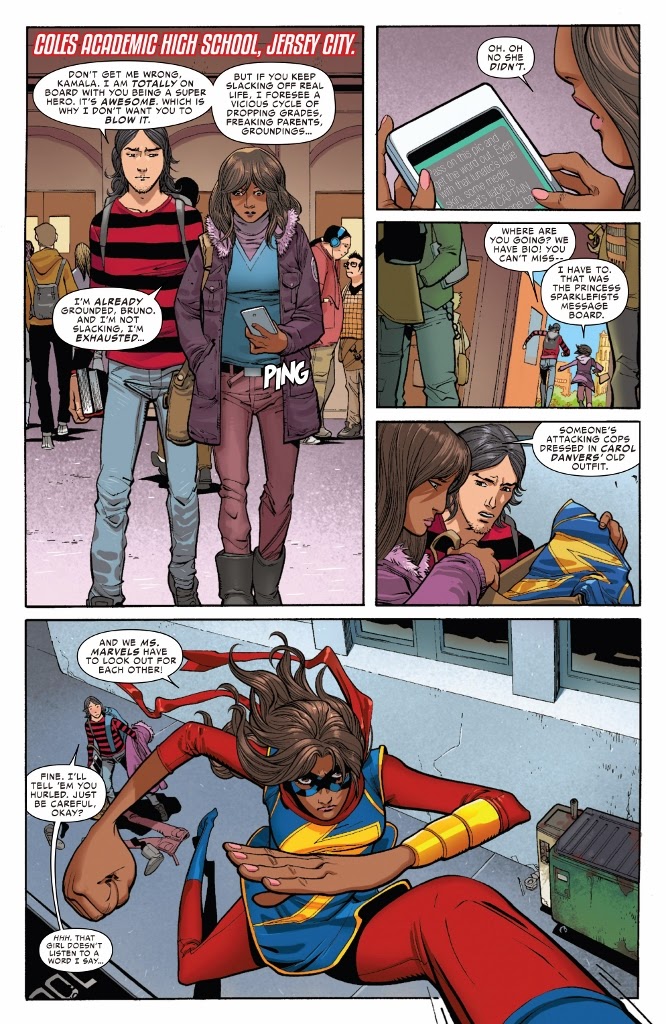 Kamala appears at the crime scene and stomps on the fake. ( Literally with her big feet) She then peeks into the van with the “stolen goods” and finds an inhuman cocoon, much like the one she came out from. Protecting the cocoon are two thugs dressed in some version of a Hazmat costume.

As Kamala is processing it all, the fake Ms Marvel, actually Dr Minerva ( enemy of the original Captain Marvel) comes and knocks Kamala away. Fortunately, this is where Spider-Man comes in and catches Kamala. Kamala is overwhelmed to be in a Spider Team Up with Spider-Man.  She goes all fan girl on him as even asks him about his date with Carol Danvers ( Ms Marvel 47.

In another scene, one of the Hazmat guys sees Spider-Man and makes a comment about how he has some history with Spidey. 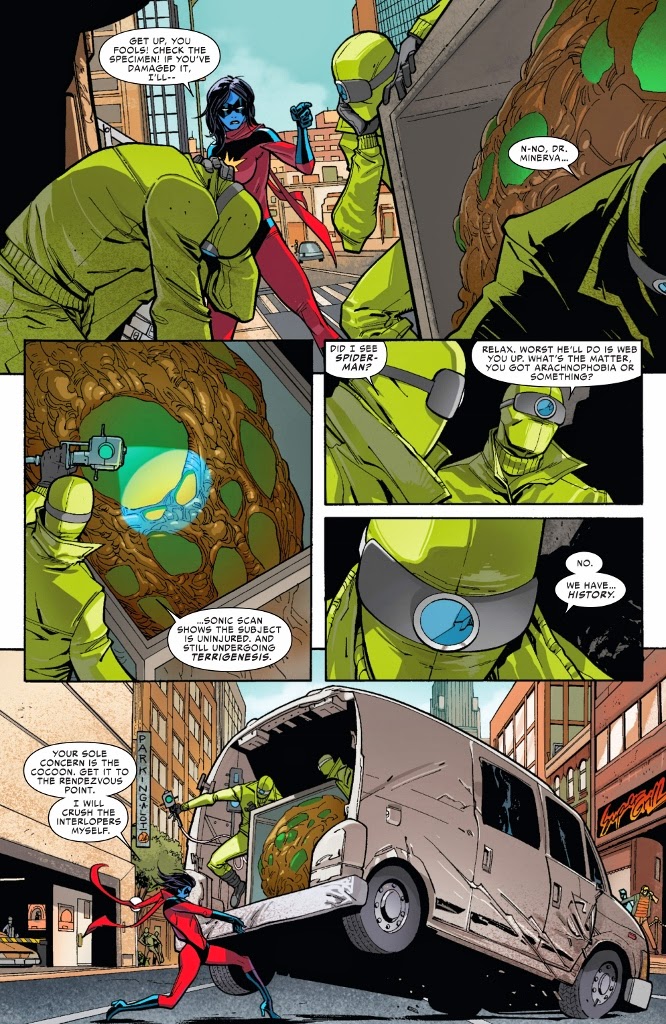 Dr Minerva  tells them to leave Spider-Man to her, and instructs them to meet at the rendezvous point. She then confronts Spider-Man and Ms Marvel ( Kamala) and trasnforms into a giant ugly alien thing.

Edge of Spider-Verse: Web Of Fear

This story here takes place before Edge of Spider-Verse # 2, which our newest reviewer Mike (NDwebhead) will be reviewing.

This second story focuses on Spider-UK, who is another version of Spider-Man from earth -833. This Spider-Man is part of the Captain Britain Corps and has access to some interdimentional omniversal hub ( a place to observe other worlds).

His Spider sense told him something was off, so he took the effort to look into it. He observes different worlds being visited by Morlun and his kin.

Among the worlds to have their "spider totems" destroyed are Spider-Man and His Amazing friends aka the old Spider-Man Cartoon, Spider-Cat (?), and Spider-Man Unlimited ( recognized only by his web cape) 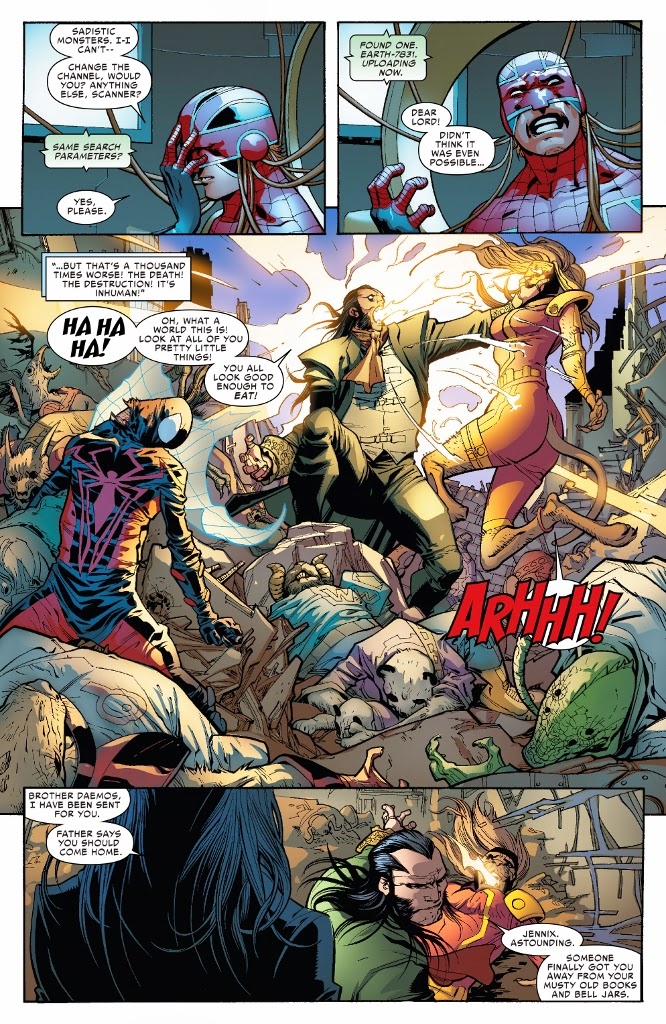 Morlun's family seems to have some discord and competition among themselves. In this issue, one brother - Daemon, is going against what he was told is and devouring all the animal totems in that world instead of just the spider. One of them is also able to sense that they are being watched by a Spider.

Our Captain Britain version of Spider-Man, Spider-UK, reports to the Majestrix what he has found out. Unfortunately she is too busy dealing with whole universes being crumbled and cannot find time to deal with "insect men dying" as she describes it.

Spider-UK is ordered to leave the premise, but not before Lady Roma, who was at the side of the Majestrix gives him a device to travel through dimensions to get the aid he requires to solve his problem.

To start right at the top, Silk's leaving Peter's apartment, though prolonged had to happen sooner or later. With the news of Silk going to have her own series, this issue slowly builds some background for her, and her search for her parents.

Ana Maria is just being herself in this issue. She is thinking of both the company and of Peter's issues with responsibility. As she obviously loved and agreed with Ock's method of doing things, she tries to convince the real Peter of doing the same.

All that aside, Dr Minerva, Ms Marvel and whoever the guy in the hazmat suit was who claims to have some history with Spider-Man is probably the more interesting part of the story. In Mcnulty's review on crawlspace, he suspects that the henchmen in the suit is probably Clayton Cole whom we have been reading about for a while in Amazing Spider-Man : Learning to Crawl.

Dr Minerva is obviously planning something big that could be connected to another story from another book involving the inhumans and Kree, that I am currently not reading and therefore am quite clueless about.

The fangirl moment between Kamala and Spider-Man was pretty good though and was exactly what Spider-Man needed to boost his ego and come up with some silly classic Spidey lines.

In the second story, we are introduced to Billy Braddock, aka Spider-UK. He will obviously be playing an important role in the Edge of Spider-Verse building an alternate team besides the Spider-Ock's, to take care of Morlun and his family. While Ock's team, unknown to the team members, is actually led by bad guys willing to even sacrifice their members, Spider-UK will be the one to lead a real team of good guys against the enemy ( Superior Spider-Man 33). 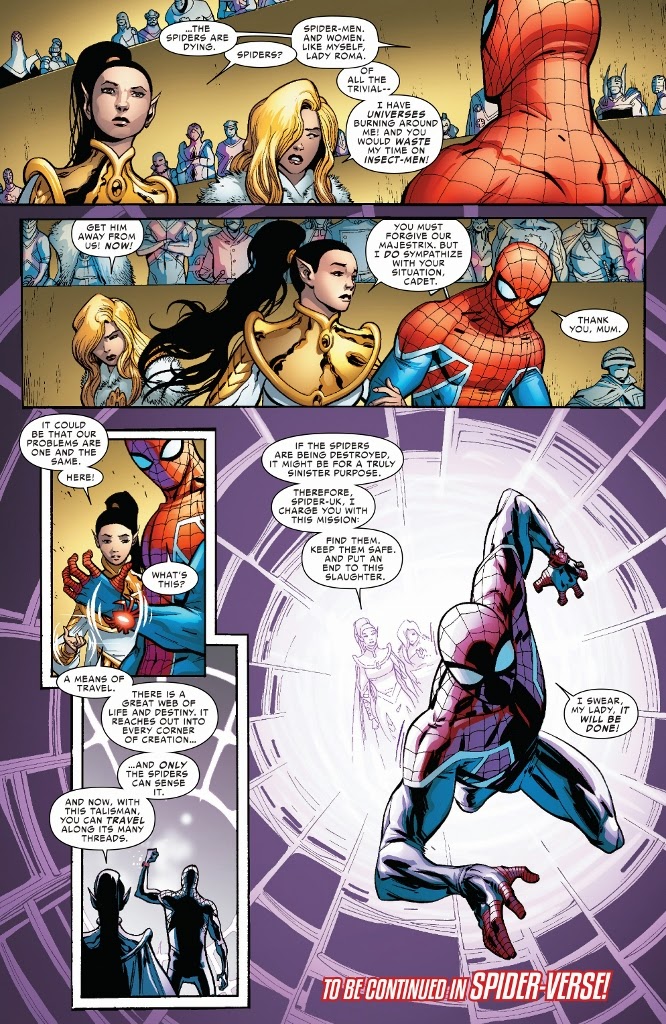 The killing of Spider-Man and his Amazing Friends would be pretty sad for fans who grew up in the 80's. Morlun's passing comment about how that world was so innocent, and how Spider-Man could not even find the words to describe his actions was quite disheartening. The poor "good" good guy never stood a chance. ( And such is the world...) 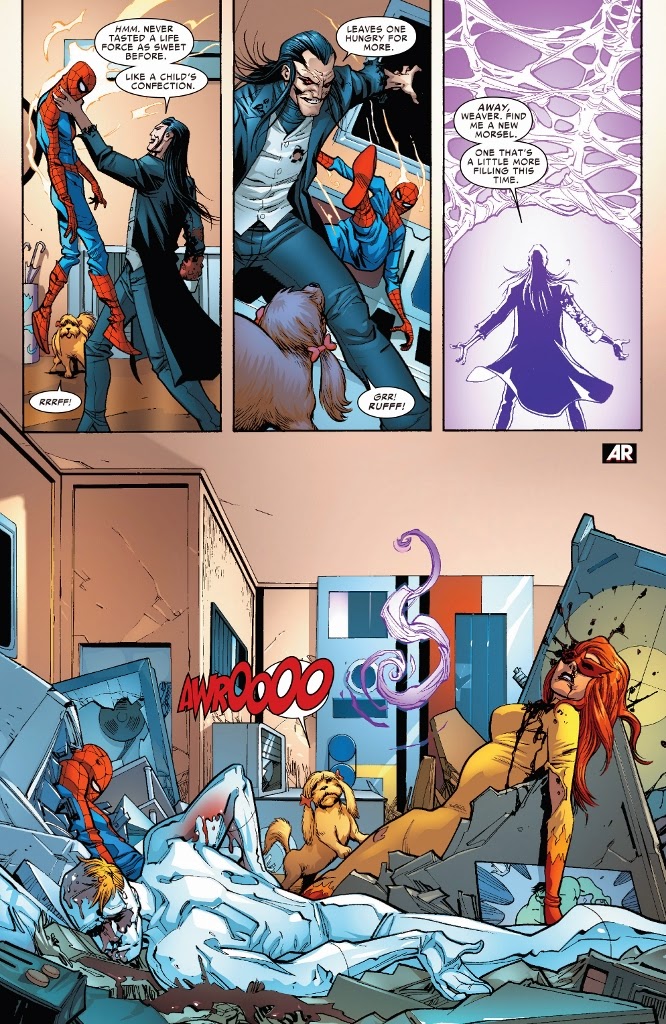 While I never watched Spider-Man and his Amazing Friends, I did watch Spider-Man Unlimited ( a little). I was more of a fan of Fox's The Amazing Spider-Man from the 90's though.  I suppose this was one way to include other known Spider-Men into the series. Connecting them to this story was quite a good move in my opinion, making the story a lot more relevant than it previously was.

Yet, in all of this it seems that the only oblivious Spider-Man is our Spider-Man... (quite lame.)