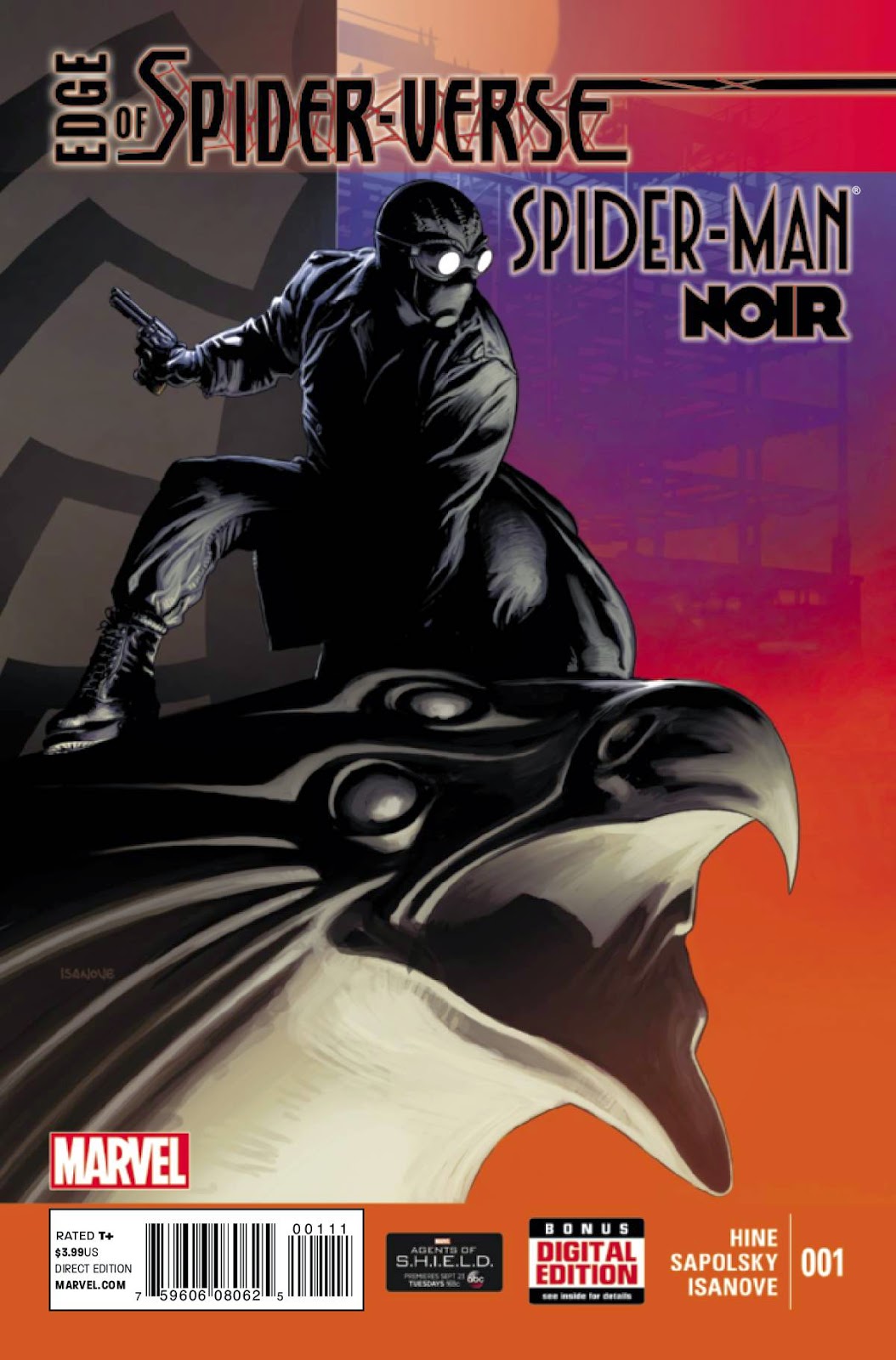 Something is about to snap the web of the spider-verse! In the build-up to Spider-Verse comes Edge of Spider-Verse, a ten series run that will introduce us to the Spideys from throughout the multiverse.

Issue #1 brings us Spider-Man Noir, based on the alternate universe series from a few years back. If you’re familiar with that series – great. If not, no big deal. The creative team do a good job of explaining without bogging down the flow of the issue. Basically it’s the main Spider-Man characters run through a “noir” filter.

We begin in 1939, a few years after the end of the Spider-Man Noir series. With big-time Prohibition gangsters like the Goblin and Crime Master dead or behind bars, does the world still need the Spider-Man? If the world at large doesn’t need him, he is at least needed by the delusional magician in the snazzy green suit – The Magnificent Mysterio! After watching newsreel coverage of Spider-Man breaking up a robbery, Mysterio is convinced that within Spider-Man flows the blood of the spider-god Anansi. Seeking the strength, agility, and power that comes with said blood, ol’ Quentin Beck sets about a scheme to get his hands on Spidey’s plasma.

Meanwhile, at the World’s Fair, Peter, Mary Jane, and Aunt May decide to take in a show. But what to see? Hmm…How about some magic! After a breathtaking, death-defying performance by the Magnicificent Mysterio, MJ asks Peter how it was possible to escape drowning after being locked under water. In his analysis, Peter realizes that after the trick Beck wasn’t even wet. And the dry ice used for the smoke effect didn’t smell like dry ice at all - our first clues that perhaps this magician isn’t so magical after all.

As the scene shifts backstage we find Mysterio and his partner removing gas masks. It seems Mysterio Noir has the same penchant for hallucinogenic gas as our old beloved Fishbowlhead from Marvel’s main continuity. We also realize that Mysterio is in cahoots with Wilson Fisk. They’re in league together to figure out how Spider-Man got his powers…which of course involves a lot of busting heads til someone talks. We get a brief synopsis of how Spider-Man Noir got his powers via a shipment of South American museum artifacts that were being hijacked by the Goblin’s crew. During the raid thousands of crazy spiders emerged from one of the artifacts, killing at least one goon, and causing Peter to black out. Word from the crooks who were on the scene was that the next day is when “The Spider-Man” began his crime-stomping career. This further confirms Mysterio’s suspicions. Now to draw Spider-Man out…but how?

Their informants/victims lead them to Felicia Hardy, Spider-Man’s lover. Fisk and Beck storm into her apartment, blast a hole in her bodyguard and demand she tell them everything about Spider-Man. Unfortunately for this devilish duo, Ms. Hardy has no answers…but perhaps she can still be of use – as a hostage! 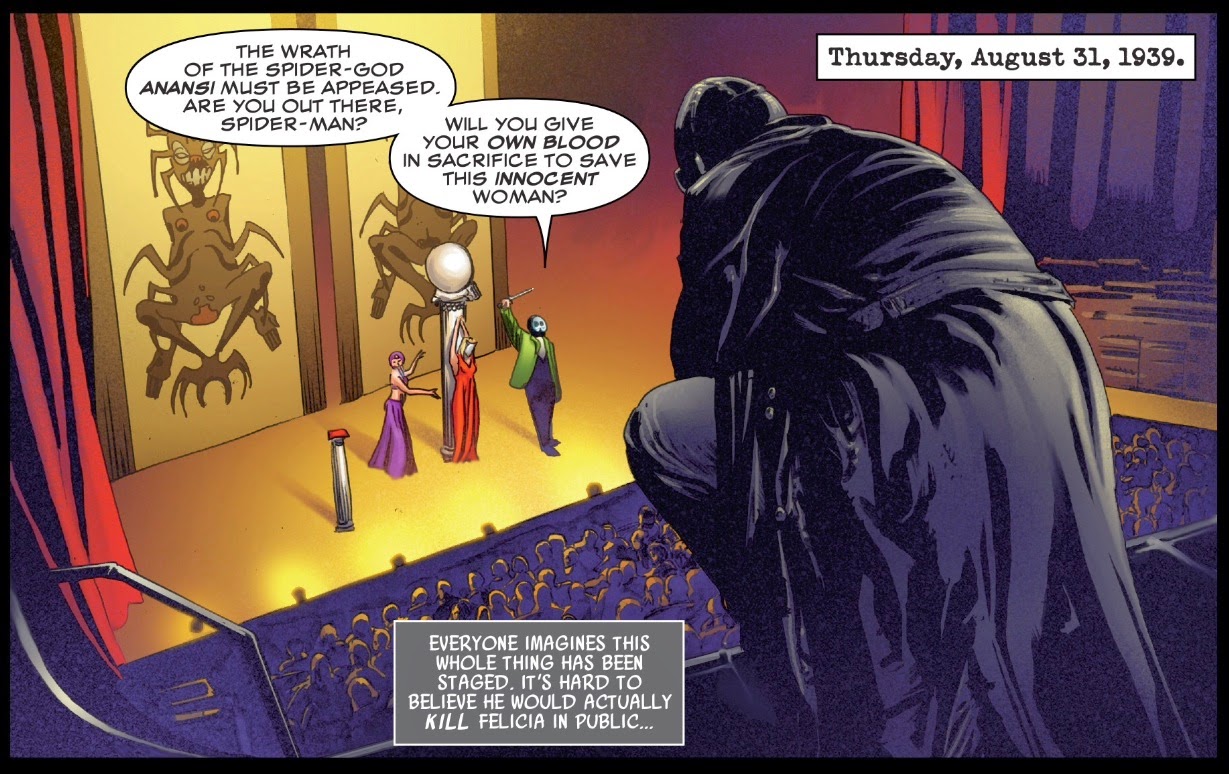 The Magnificent Mysterio issues a public challenge to the Spider-Man in the Daily Bugle – he must appear at Mysterio’s next performance and offer a blood sacrifice or the damsel in distress will be sacrificed instead. Under the ruse of it all being a big show, the audience turns out in droves to see what will happen. Of course, Spidey turns up to save the day, but things go south quickly when he gets doused with Mysterio’s gas and locked in a water chamber. Fear not, though, as ol’ webhead webs over his mouth and nose prior to being submerged, thus allowing him enough oxygen to shake off the effects of the gas and flex his spider muscles to break free from the chains. He breaks loose, punches out magic man and frees Felicia. End of story, right? Nope. That pounding of his spider-sense he has been feeling for days suddenly intensifies – after Mysterio is neutralized. But why??!

Enter Nineteenth Century Deep Sea Diver Man! Yes, Karn, the scary dude who is chasing and killing Spider-Men across the multiverse arrives on the scene armed with his vicious, spider-killing, energy-producing bident! He is about to run Noir Spidey through when poof! Spider-Ock appears, snatches Noir Spidey and morphs back to the 2099! We are left with Noir Spidey being introduced to a handful of other Spider-men (and women) from various timelines. And fini. 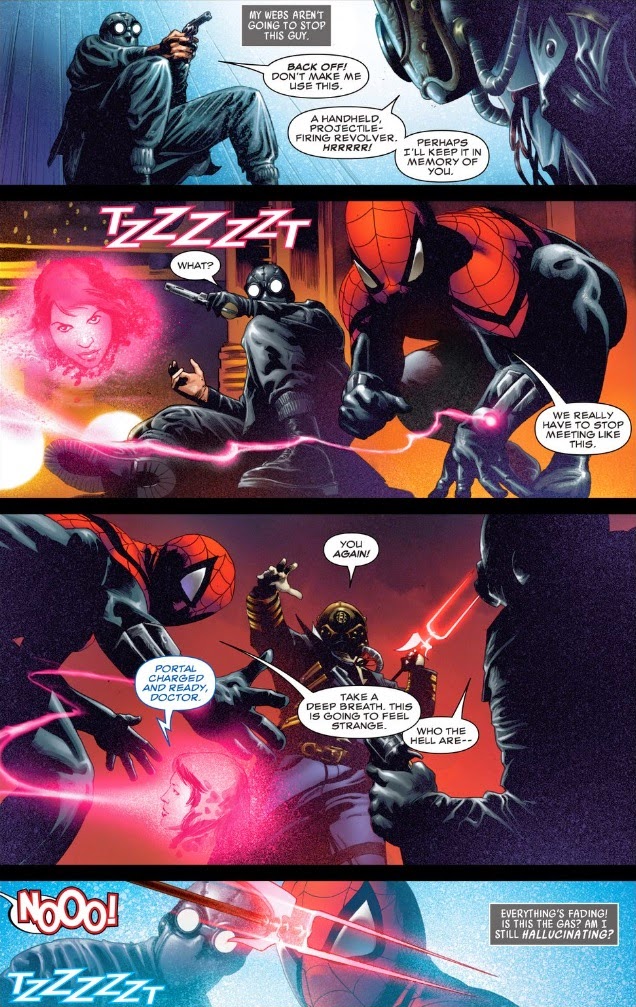 Having previously sampled some of the original Spider-Man Noir series, I thought it was a real treat to experience the reunion of writers David Hine and Fabrice Sapolsky and artist Richard Isanove.

Hine and Sapolsky do a great job of setting the background, laying out the story, and touching off the spider-verse event in a very limited amount of space. They do an excellent job of subtly incorporating actual 1930s events into the background and discussion to give a very real feel to the story. For example, Peter’s inner monologue reveals that MJ just returned from fighting in the Abraham Lincoln Battalion during the Spanish Civil War. It’s only a few panels, but the writing hints at Peter’s anxiety not only when she left, but his anxiety that something in MJ has changed since she was on the frontlines. It’s also revealed that maybe Peter feels guilty – he all these spider powers and yet it is MJ who goes off to try save the world from fascism.
The artwork in this particular example also reveals the same anxieties hinted at in his inner-monologue, from Peter’s change in facial expression to MJ acting aloof while Peter and Aunt May discuss Salvador Dali. It’s a great thing to have the art correspond so fully with the writing. In addition, Isanove captures the noir look expertly, weaving in copious amount of shadows juxtaposed with occasional brilliant lights. The combination of art deco and gothic feel to their surroundings alone could reveal to a read that these characters are in 1930s New York City.

The whole creative team seems to be both noir and Spider-fans as they adeptly blend the best of both of these worlds. The dark grittiness characteristic of the noir genre is there, but without it superceding Spider-Man; in other words it is Spider-Man made “noir” and not a noir story that has a spider-man. So, as far as it being a good Spider-Man Noir issue this hit the nail on the head. The Spider-Verse story was not advanced all that much, but we kind of figured that as this is Edge of Spider-Verse. In summary, as a stand alone one-shot it’s worth checking out. In terms of it being an essential, “must-get” for the lead-up to Spider-Verse? We essentially got the same closing panel as Superior Spider-Man # 32 so meh, not really.
Read More
Newer Posts Older Posts Home