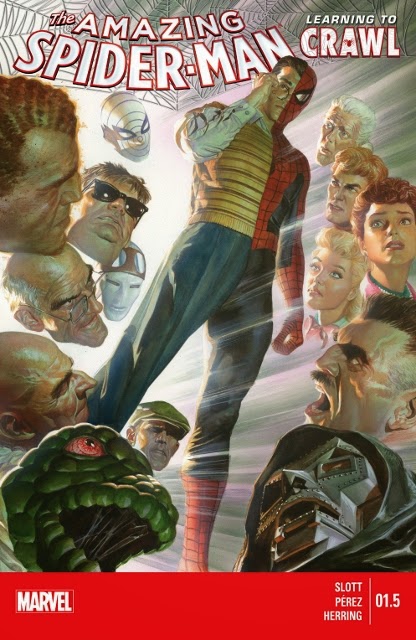 This is the final installment for Learning to Crawl, a five part miniseries focused on an unknown story of Spider-Man in his early days. So far in the last few issues we've learnt a few new things about Spider-Man that we did not previously know.

This issue begins with Peter, having retired from being Spider-Man after failing to beat Clash even with his ultra scientific geek mode super weapon he created, Peter was out-scienced.

Peter has resorted to using his super powers to take pictures for the bugle, helping Aunt May settle the bills. Everything about Peter Parker is returning to the way it was, including him being bullied in school.

Naturally, Peter feels extremely lonesome, unable to make any friends and unable to show that he is actually no longer the weak nerd he once was.

In the meantime, Clash is getting all the publicity he dreamed of, crashing wrestling matches to gain publicity and gaining recognition in public. The teenage scumbags all love him and even have tattoos of him. Eventually Clayton gathers the courage to call Polly, the girl he met in Amazing Spider-Man # 1.3 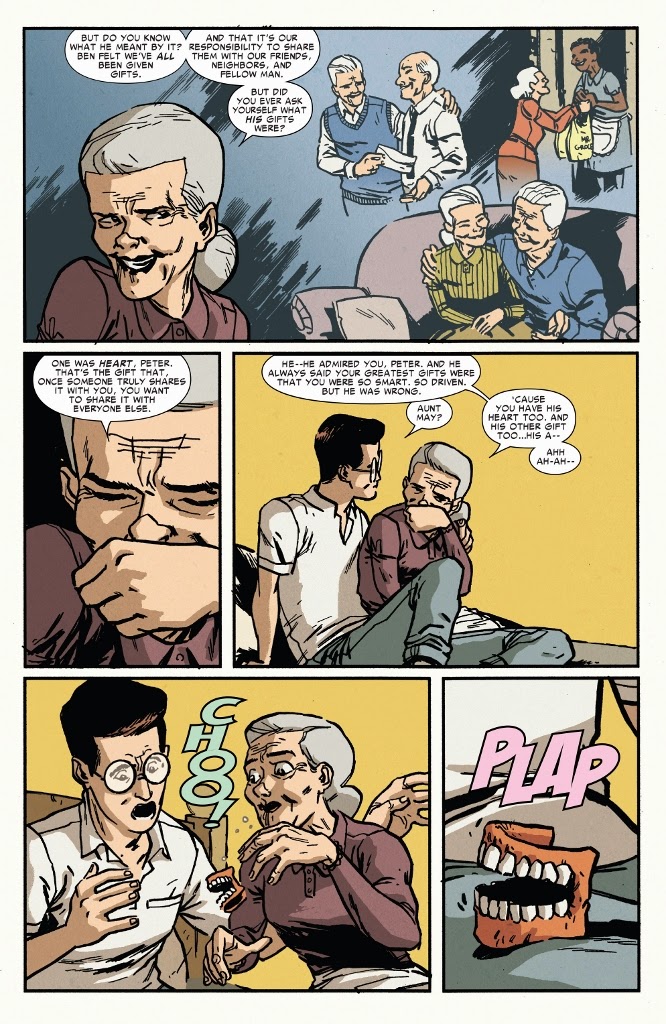 Meanwhile, Aunt May, having noticed Peter's glum appearance decides to have a little chat with him one night. She asks if Uncle Ben had his 'responsibility and power' talk with him yet, to which Peter replies that he has.

Aunt May tells Peter that Uncle Ben had a power, the power to have fun and share joy with others. While telling this to Peter, Aunt May pretends that she just sneezed her teeth out with some false chattering teeth to which Peter begins to laugh hysterically.

Aunt May tells Peter how Uncle Ben loved to hear him laugh like that. After that conversation, Peter decides that he has been going about being Spider-Man all wrong by trying to honor how Uncle Ben died instead of how he lived.

The next day, Clayton is about to meet Polly at school but decides that he would be more comfortable being Clash instead. At the sight of Clash, everyone scatters and calls the police. Clash goes straight for Polly and sound waves her friends away when they try to protect her.

Just in time however, Spider-Man catches them all with his webs. Both Spider-Man and Clash battle it out for a final time, except this time Spider-Man fights like the Spider-Man we all know- the joke telling Spider-Man. 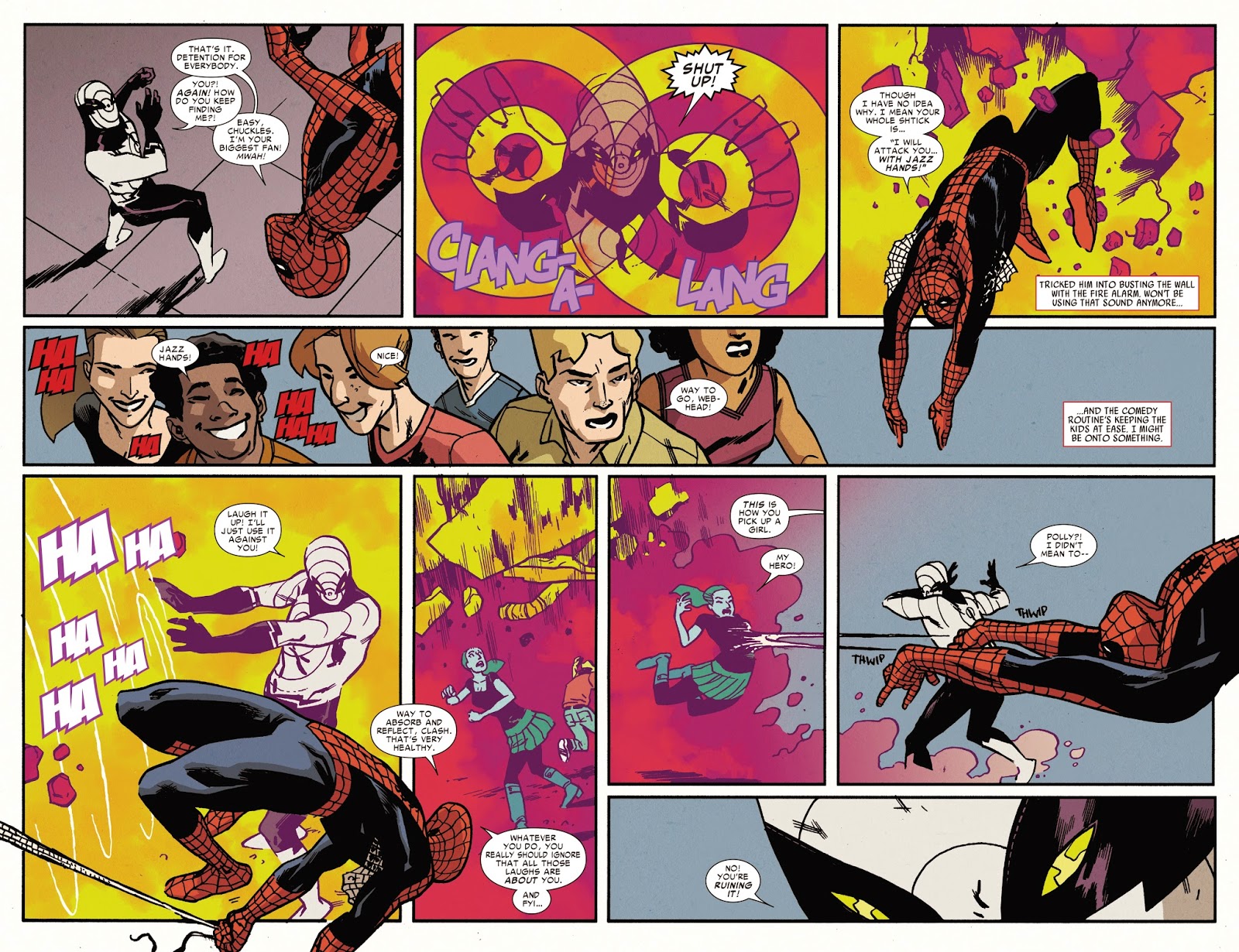 Spidey makes a fool of Clash, which gains the attention and laughs of the students around. At the end of the battle, Spider-Man webs Clash up in such a way that in order for Clash to break free, he would have to pop his own ear drums, which obviously was not the preferable choice for him. Spidey then unmasks Clash to reveal Clayton and leaves him his autograph, as he did once before in Amazing Spider-Man # 1.1, only this time, it is signed " Your Friendly Neighborhood Spider-Man." 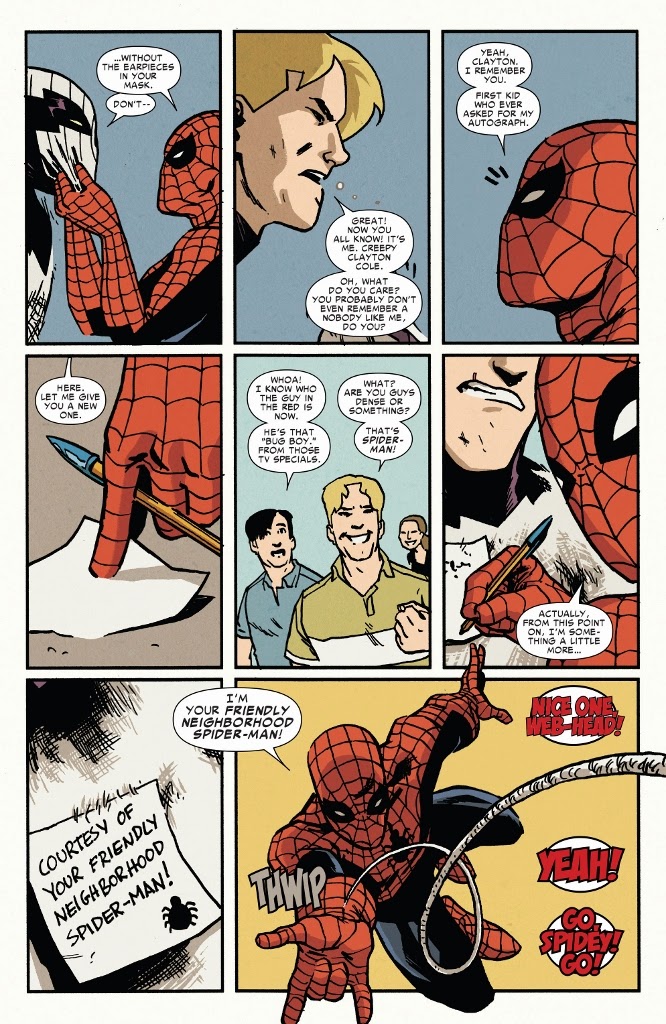 And so begins the adventure of the Spider-Man we all know and have been reading about for the last 50 years.

This whole series, and the title suggests is about how Peter Parker learnt to crawl and get on his two feet donning the shoes of Spider-Man. Peter did not start out perfect as we thought, and his mistakes caused him notable enemies like Jonah Jameson, and other more dangerous, but less notable enemies like Clash.

Peter created the Menace image for himself back in his early days when he was not too sure why he was being Spider-Man.

At the start of this review I pointed out four new things we learnt in each of the last four issues of this story. In this issue, we learn how and why Spider-Man became the fun loving Friendly Neighborhood Spider-Man. The persona of Uncle Ben, the man who used his ability to bring joy to others is portrayed as best as Peter can as Spider-Man.

Also, as much as Aunt May would probably regret in time to come, she helped bring Peter, and thus Spider-Man back to life.

To be honest, I am not too impressed by this whole series. It would have been fine to think that Spider-Man turned out to be the way he was immediately after Uncle Ben's death. While this story explains some unanswered questions about the past, the truth is that nobody was ever asking those questions.

Nevertheless, the whole thing is still an entertaining read for Spider-Man die-hard fans.