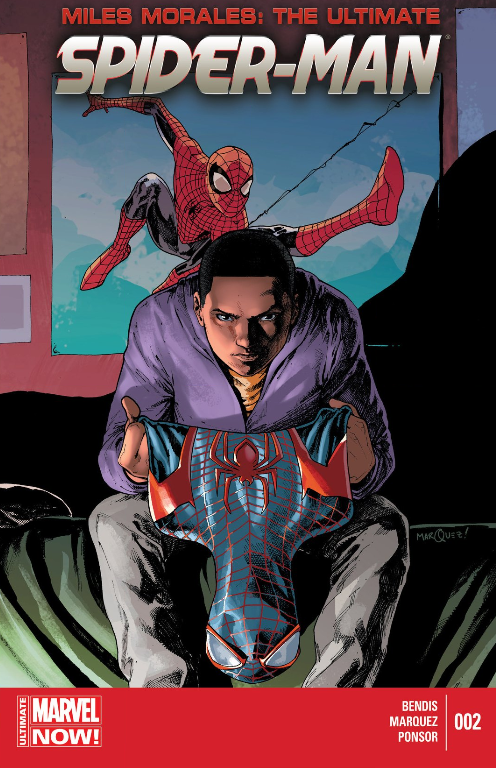 Hello everybody and welcome to my review of Miles Morales: Ultimate Spider-Man #2. It's safe to say that that Miles has a lot on his plate right now. Peter Parker is seemingly alive and well and standing in his apartment. The Green Goblin is on the loose, no doubt with plans to make everybody burn, and the so-called "Spider-Twins" are continuing their crime spree. And if that weren't enough, Miles is still wrestling with whether or not to tell his girlfriend Katie Bishop the truth regarding his secret identity. Seems like Miles has inherited the ol' "Parker Luck"...

At the now abandoned Osborn Industries complex, the Green Goblin lands in his former office before reverting to his human form of Norman Osborn. Observing the room, Norman removes a painting of a horse to reveal a retinal scan device which he activates, allowing him to access a secret room containing Oz serum, money, computers and even the original harness of the now-deceased Otto Octavius (there's also a bed). Now equipped with some assets, Norman sinks into a contemplative pose over what to do next. 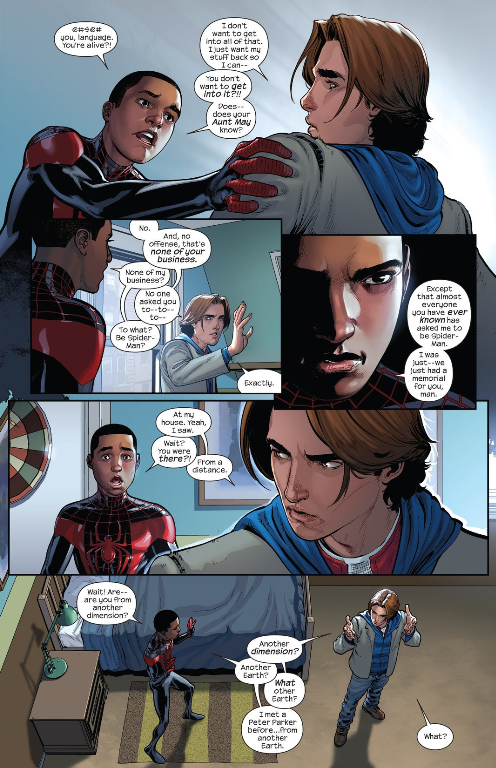 Meanwhile, Miles Morales is standing in his bedroom, totally gobsmacked to see a very much alive-looking Peter Parker standing in his bedroom, asking to have his webshooters back. Miles reaches forward and grabs Peter's face as a way of making sure he isn't going mad, during which Peter comments that Miles needs to wash his gloves. Miles continues to look lost for words, so Peter waits until the realisation properly sinks in, which it does a few minutes later as Miles reacts the same way we all did when reading that last page ("What the #$@#$@#$?!"). Miles asks how Peter can be alive, but Peter replies that he doesn't want to get into that right now. Miles then asks if Aunt May knows that her nephew is still alive. Peter answers no and adds "no offence, but that's none of your business", saying that no one asked him to be Spider-Man. Miles counters that by pointing out that everyone whose ever known Peter has asked him to be Spider-Man, adding that they just had a memorial for Peter, who reveals he was there "from a distance".

Miles is then struck by the notion that this could be a Peter Parker from another Earth, so he asks him if he is, referencing his team-up with the Amazing Spider-Man in Spider-Men. Peter doesn't seem to understand what he's talking about though and once again asks for his webs back so he can leave Miles alone. Miles takes issue however with the fact that Peter hasn't told Aunt May, which he apparently doesn't want to do since he doesn't want to put her through the stress. Miles insists that Peter tell her, prompting Peter to again asks for his webs. Miles responds that May gave the web-shooters to him because she thought Peter died. Peter says that he did die, and when Miles asks what that means, he starts to get angry, exclaiming that he doesn't know Miles, that he didn't ask him to pick up the mantle, and that he's sorry if this isn't up to Miles' standards of "how you think I should do these impossible things no one in the world outside of Captain America has ever had to deal with". 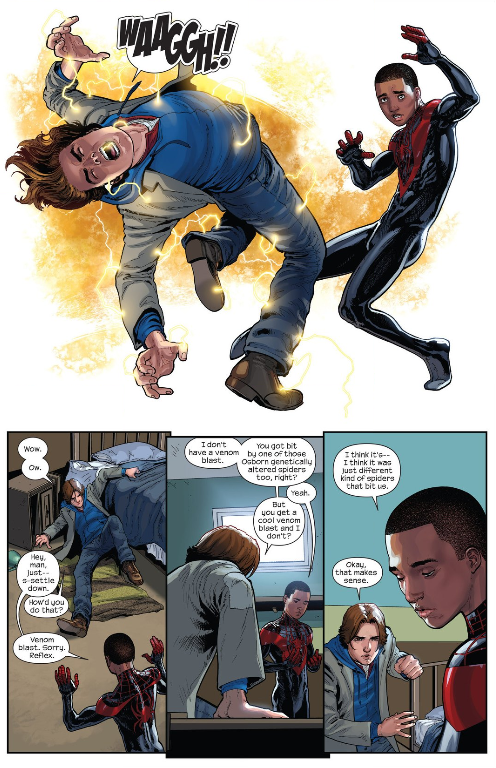 Miles insists that Peter tell Aunt May, or he will. Peter squares up to Miles, saying that he was trying to avoid "getting weird" with him. Miles tries to diffuse the situation, asking that Peter sit down and just talk to him, but Peter's past listening. He grabs Miles' wrist, saying this isn't about him, only to receive a painful surprise when Miles' Venom Blast activates, throwing him back. Mile apologises, explaining that it's a reflex. Peter is confused since he doesn't possess a Venom Blast, which leads to the two concluding that they must have been bitten by different kinds of spiders, right before Peter retaliates, knocking Miles back. Before Miles can respond, Peter knocks him out with a punch to the face, saying beforehand that he asked him nicely a hundred times.A short while later, Miles regains conciousness to find Peter gone, as well as his web-shooters. Miles wonders how Peter could still be alive, before coming to the conclusion that it must be a clone, which he repeatedly says as he pulls his mask on and heads off to find his predecessor.

Elsewhere, a worker informs Stark Command that they have a problem at Dock 9. It's those pesky Spider-Twins, who are kicking all the security guards asses whilst arguing back and forth about how many guards they thought there would be. Using their acrobatic skills and a stolen taser, they soon leave all the guards unconscious. The worker says he'll get out of their way since he doesn't want to get a face full of foot, but the Twins have other ideas. They want the worker to help them since he knows what they're looking for. They also know he called the cops, so they give him a minute to give them the package that Tony Stark labelled "Latveria". 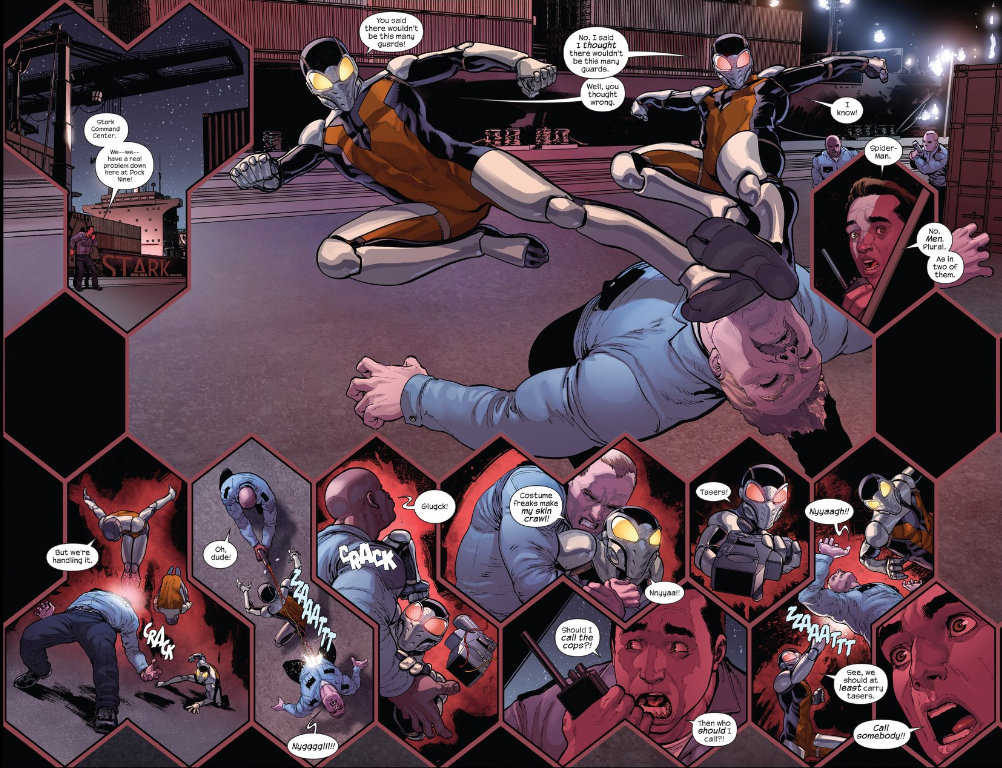 The next day, Miles is telling Ganke about his encounter with Peter Parker, still maintaining that it's a clone rather than the real thing. Ganke wonders where he got that theory from, so Miles tells him the truth about Black Widow, aka Jessica Drew, that she's a female clone of Peter, which leads Ganke to remark that "Peter Parker had a great tush". He asks if May or Gwen Stacy know. Miles replies no since he went to her house and she wasn't home, but even if she was, he's unsure if he could really tell her just in case she's wrong. Ganke throws out the suggestion that it could be the real Peter Parker, pointing out that a giant purple guy tried to eat the planet last week and that maybe everything they know about the world and life and death isn't as black and white as they thought. He suggests that Miles tells Gwen or Jessica Drew, but the latter's phone is off and Gwen would definitely tell May. Their discussion is suddenly interrupted by Katie Bishop, who greets Miles with a kiss and asks what's up. To Ganke's surprise, Miles chooses now to begin to tell Katie the truth, that he is Spider-Man... 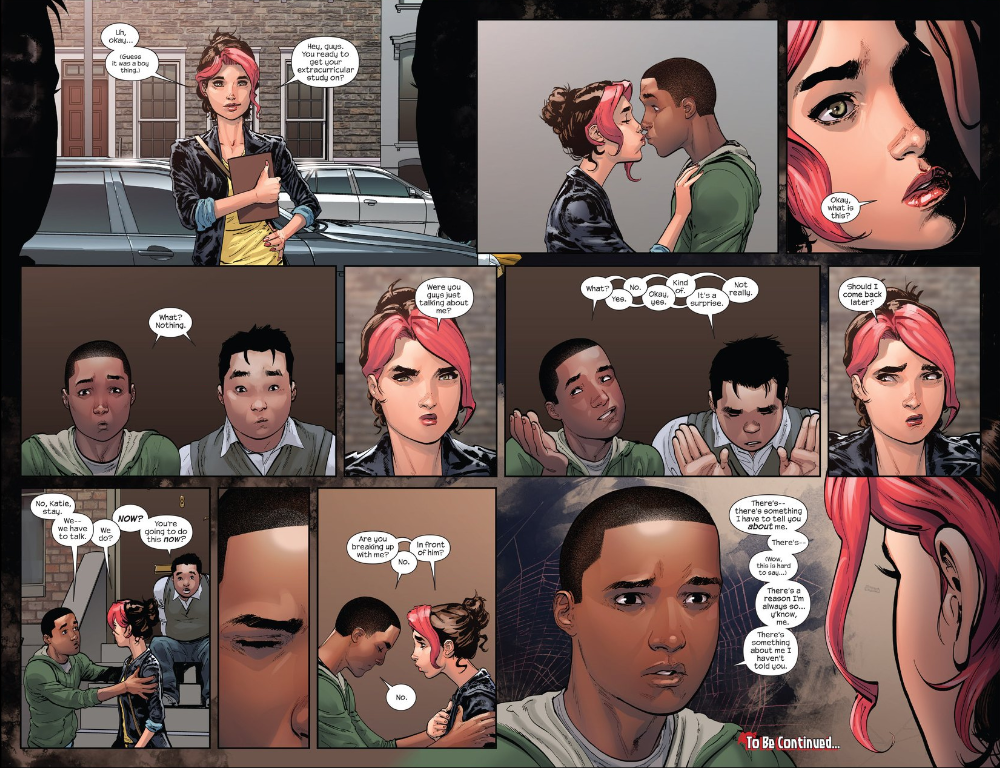 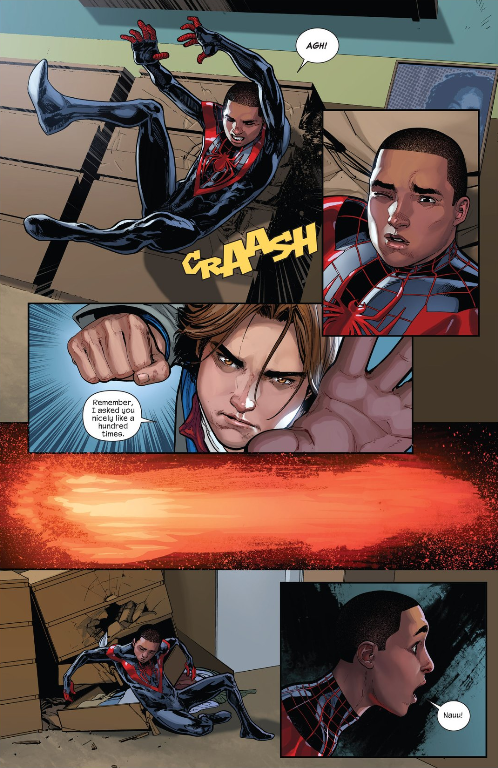 As I noted in my introduction above, there is a lot going on in this opening storyline, but Bendis mostly keeps it from being overwhelming, whilst thickening the intrigue of the Spider-Twins and that surprise twist last issue. Peter's interaction with Miles is interesting because for once, we're seeing him from an outside perspective. There's no narration from Bendis to put us inside his head, but it works because it makes his presence dubious, meaning we get a sense of what Miles is feeling right now. I love his reaction to seeing  Peter alive. It was almost like Bendis filmed a Spider-Man fan reading the end of the previous issue, right down to the swearing and Miles continued declaration that it must be a clone, which I'm still hoping is not the case. The conversation between Ganke and Miles about Peter seems to address fan questions and concerns.There are plenty of people, myself included, generally see the Ultimate Universe as a place where people stay dead, but Ganke's remark about Galactus legitimately throws that into doubt. Bryan Lim suggested in a comment on my last review that Peter could still be alive thanks to the disruptive events Age of Ultron had on the entire multiverse, and given that line from Ganke, and the impending Spider-Verse crossover event, that theory seems stronger and stronger. It's possible that this Peter could be from an alternate version of the Ultimate Universe where he never died. It's a bit out there, sure, but the characters have been bringing up both Cataclysm & Spider-Men repeatedly here, so it's certainly possible. 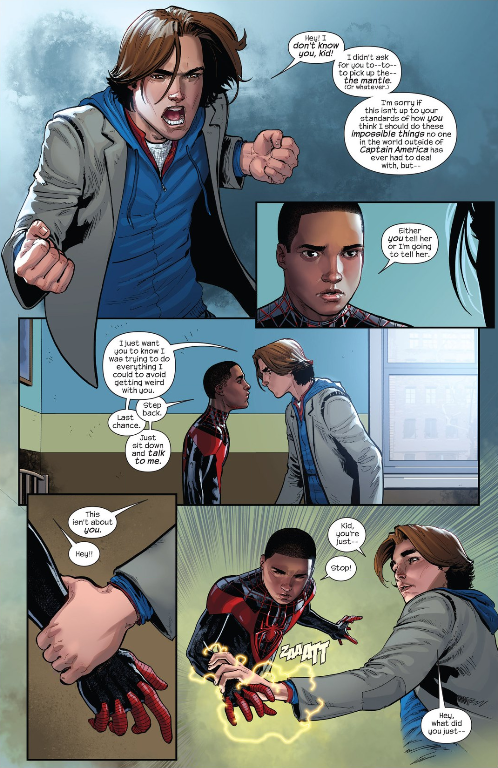 On the surface, Peter's hostile behaviour towards Miles seems out of character, but I actually think his behaviour makes sense given his situation. If we're to believe that this is indeed the real Peter Parker, then he's likely unsure of what to do and therefore frustrated. It's an established trait about Peter that, when things from both his personal life and his life as Spider-Man are piling on top of him, he can have a tendency to lash out verbally and hurt his friends unintentionally. Not only does Peter mention a reluctance to tell Aunt May that he's "back", which conflicts with his desire to return to being Spider-Man, but he's also shown to stutter and struggle with what words to say. Plus, Miles being in the picture would complicate things even more for Peter, since he doesn't technically have to be Spider-Man anymore with him around, which would no doubt play havok with his conscience, as it did for 616 Peter when he briefly retired from being Spider-Man and Mattie Franklin assumed the role.

The segment with the Spider-Twins, while not bad within itself, did feel a bit disjointed from the rest since they don't seem to be concerned with Spider-Man. Come to think of it, if Miles is out webslinging in order to find "Peter", then wouldn't he perhaps be alerted to the Spider-Twins through his Spider-Sense? Anyway, the reveal that they're after a Stark package marked for Latveria is a potential clue to their identity, or at least, their employer. The crate no doubt contains some advanced new piece of tech, which could mean that these guys are working for Roxxon, though that's unlikely as S.H.I.E.L.D shut them down. A.I.M is another possibility, though I don't know very much about this world's version of A.I.M, let alone if they're even still around. I'll throw Hydra in as a last suggestion since this arc is already kind of tying in with Captain America: The Winter Soldier by having S.H.I.E.L.D shut down.

It goes without saying that the art by David Marquez is fantastic as usual. In fact there are so many awesome pages that I had a tough time choosing which to show in this review. The Peter Parker here unquestionably looks like the Ultimate version, though Marquez tweaks the character design to show that this guy is older, though maybe not that much wiser. Marquez manages to capture many different moods during the conversation between Peter & Miles, making the scene both comical and tense at the same time, yet one never overpowers the other until the end. Once again, another well-written, well-drawn issue in an increasingly intriguing plot... 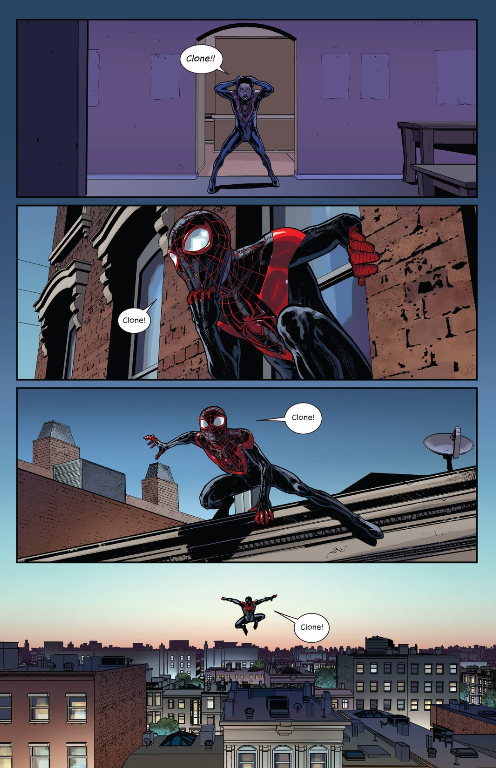