This issue begins with Spider-Man finally deciding that the purpose of his Spider Powers are for photography. Hi spider sense and wall crawling allows him to hide in places where no one will notice him.
He takes photos of the Thing, Thor, and Iron Man and sells them all to Jameson.

Peter decides to quit being the crime fighting Spider-Man and begin to resume his life as Peter Parker. His grades begin to rise and Peter even manages to find friends to spend time with. Peter decides that the Fantastic Four and other heroes can take care of the world's problems. 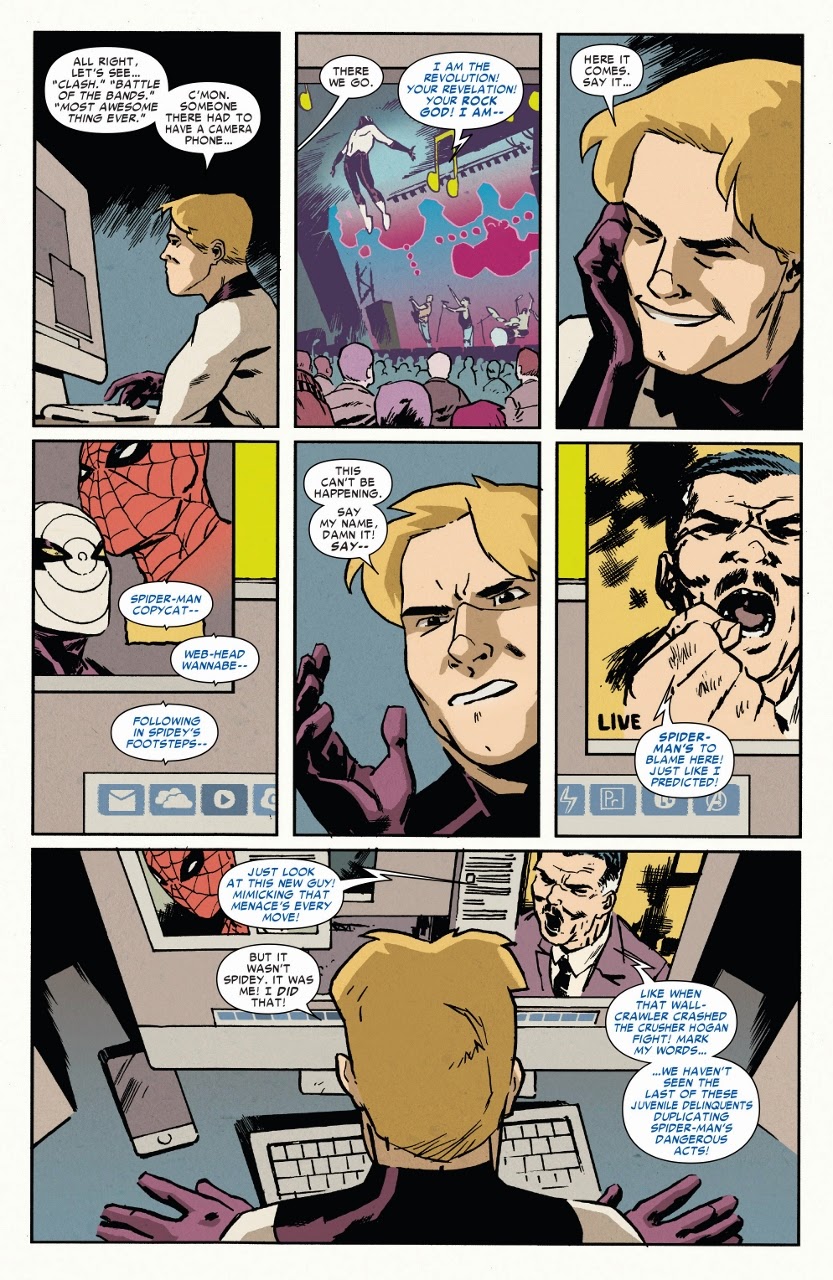 In the meantime, Clayton Cole, aka Clash is trying to build a reputation for himself. He begins creating problems for the public, hoping to get any sort of publicity. Much to his disappointment however, Jameson labels him as a Spider-Man imposter, creating a nuisance as Spider-Man did. Clayton is especially disturbed that the name "Clash" was not recognized by anyone, and that he has instead become known as a Spider-Man mimic.

Seeing what Clash has been doing in the local press, Peter decides it is his responsibility to put an end to Clash. He steals some equipment from the school and starts working on  a device to counter Clash's powers. Peter has full intention to replace everything he took from the school as soon as he has the money to buy new ones.

He goes to Jameson to try to sell more photos, hoping that the money will be enough to cover the cost of the equipment. However, the Daily Bugle is attacked by Clash, who came to tell Jameson his name, and make sure Jameson remembers it. Jameson thinks Clash to be a fool and a copycat of Spider-Man, refusing to print anything about Clash.


At that point, Peter takes the opportunity to change into Spider-Man, test out his new counter frequency invention and fights Clash in the Bugle.  However, Peter's device does not work as Clash already had counter measures for such situation. 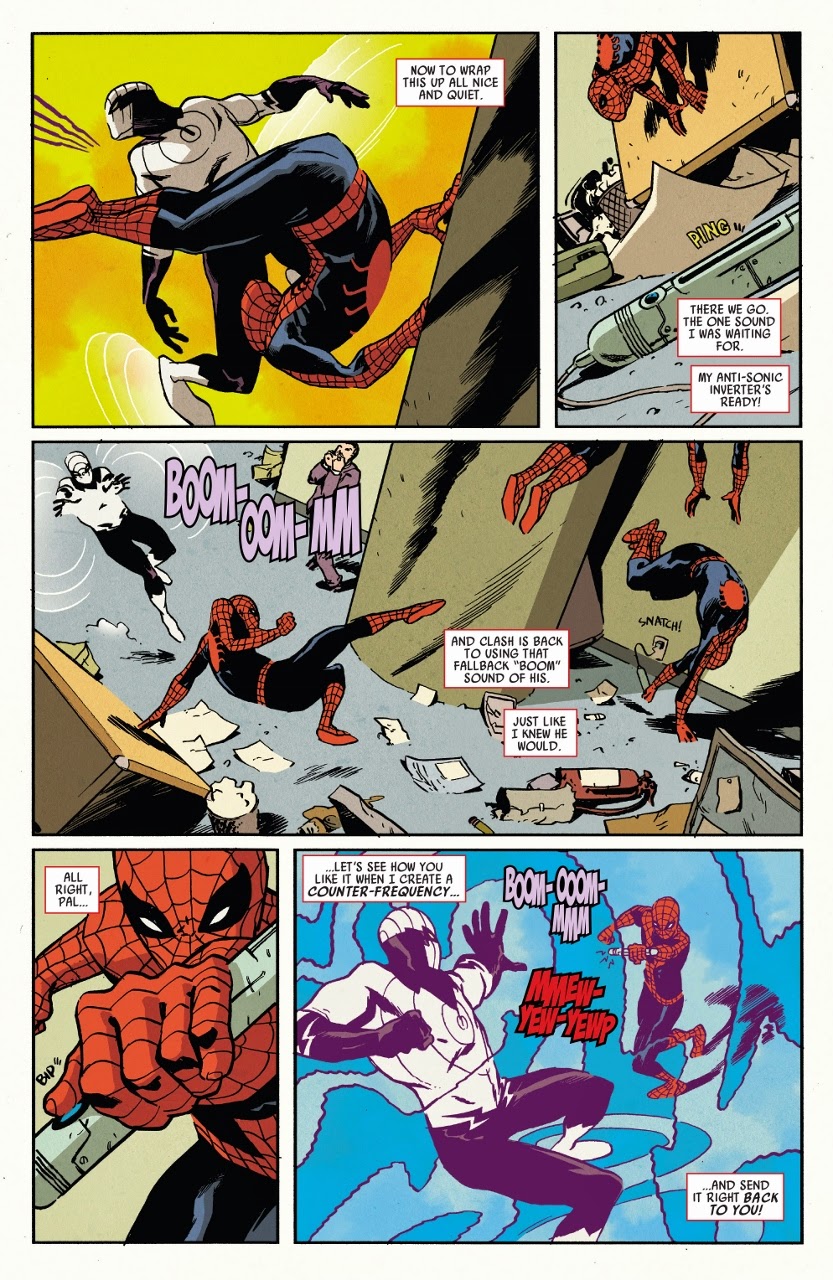 At the end of the fight, Jameson is convinced that Clash is the real menace and that Spider-Man is the joke. He then gets everyone to begin a write up on Clash.

Back at school, the principal has discovered that Peter stole equipment, thanks to Clayton, who witnessed Peter taking the equipment. To make matters worst, Jameson fires Peter for not getting a single photo of the fight between Clash and Spider-Man that took place right at the bugle while they were all present.

The issue ends with Peter going to Uncle Ben's grave and venting out his problems.

As we all know, Learning to Crawl is a back story about Spider-Man that was not previously told. Here, we see why Jameson and Aunt May hate Spider-Man. We all see for the first time that Jameson decides Spider-Man is not actually a menace, but a joke instead.

This issue also marks the first time that Peter has been 'out-scienced' by Clayton. This issue marks the first of much 'Parker Luck' that is to follow, with him being, fired, losing the fight against Clash, and being caught for stealing at school.

Once again it is evident that Spider-Man only brings problems to Peter's life. When Peter hung up the costume, his life was going great. He had friends, and his grades we going up again. Clayton however remained a loner and was getting jealous of Peter as depicted several times in the story. Clayton jumped on the opportunity to get Peter in trouble, when he noticed Peter doing research on sound technology.

At the start of the issue, Peter ventures on a care free life, not taking any responsibility with his powers, much like how he did before Uncle Ben died. By the end of this issue however, he is beginning to realize that his responsibilities cannot be evaded forever as a small time villain, inspired by Spider-Man is running lose on the streets.

It appears that Peter needed to be taught a second lesson on responsibility before he began his career as the Spider-Man we know. 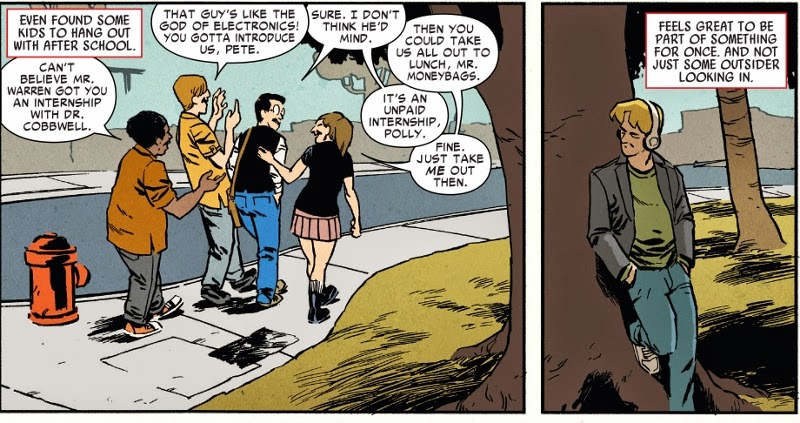