Guardians of the Galaxy # 15 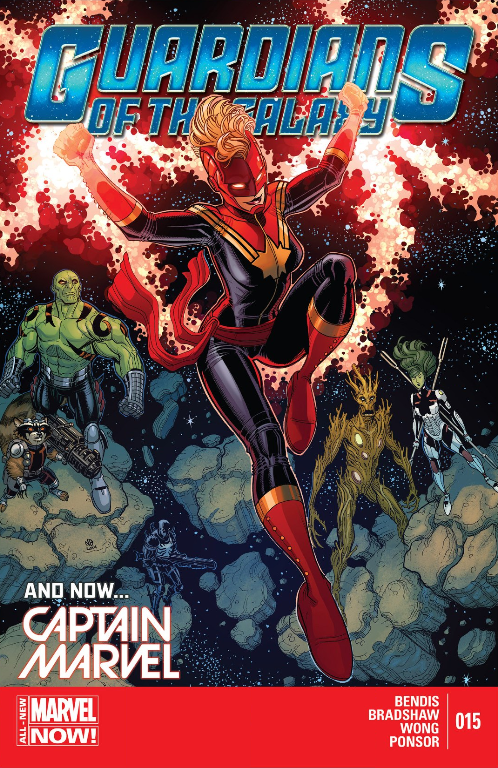 Hello everybody and welcome to my review of Guardians of the Galaxy #15. Last time we saw the Guardians, they had been forcibly disbanded by Peter Quill's father J'son, with all but the team's two newest recruits, Captain Marvel and Agent Venom, captured and distributed amongst the their many enemies. What exactly do their captors have planned for the Guardians? How about we take a look?

Rocket Raccoon awakens to find himself on an operating table at the mercy of several Kree scientists, who remark that "the specimen" did not respond correctly to the measured anaesthetic. They decide to put him under again, but are ordered not to by the Supreme Intelligence (observing the operation via monitor), who says that they should explore every unique facet of this "rare species". Rocket asks where the rest of his team are, to which the Supreme Intelligence answers that the Guardians of the Galaxy have been disbanded, that Rocket is now the property of the Kree Empire, and that it and it's science conclave are looking forward to "the answers your unique biology will supply us". At first, Rocket pleads with the S.I not to kill him, but when it tells him that they won't, and the scientists begin asking him questions about his origin, he takes it back, yelling with profanity that if they don't kill him, he'll kill all of them. Unfortunately, this doesn't seem to faze the scientists. 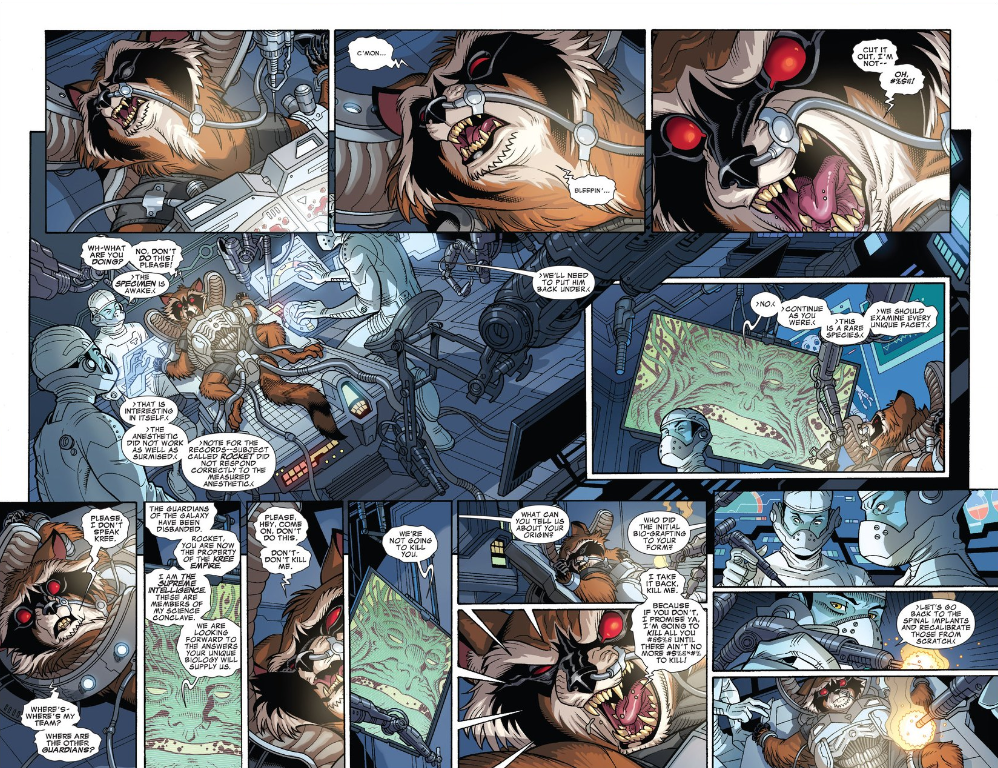 Gamora is now apparently the property of the Brotherhood of the Badoon, and is being forced to fight several  on their homeworld of Moord, while one of the Brotherhood's leaders asks repeatedly where her father, the death-obsessed Mad Titan known as Thanos, is. Gamora in fact has no idea where Thanos is (He is currently lying frozen, along with two of his henchmen, in the Necropolis, dead city of Wakanda, the Black Panther's nation, and base of operations for the Illuminati, as shown in Jonathan Hickman's Infinity & New Avengers), but obviously the Brotherhood wouldn't believe her even if she wanted to tell them, so she fights back and kicks a whole lot of Badoon bottom, but gradually begins to be worn down. 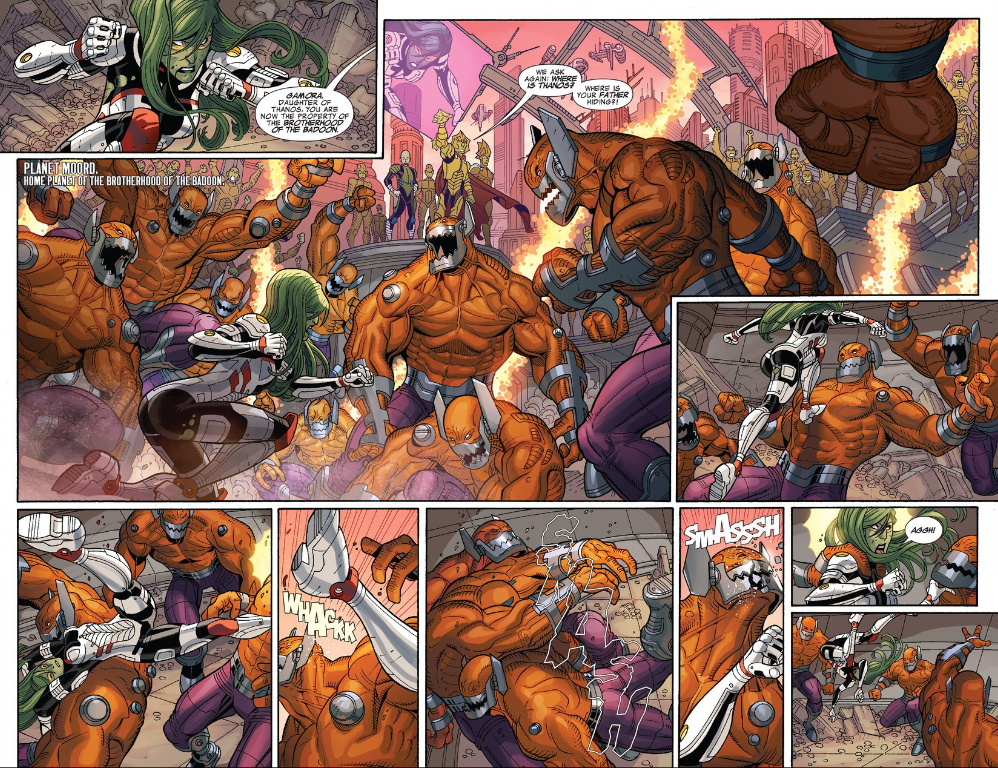 Drax meanwhile is in custody onboard the Shi'ar space station Ragnu 7. Manta of the Shi'ar Imperial Guard (of which current Avenger Smasher is also a member) speaks to Drax on behalf of Gladiator, the leader and chosen Praetor of the guard, telling him that he is now a prisoner of the Shi'ar Empire and that he will answer for his crimes against the galaxy. Drax however challenges Gladiator, who speaks directly this time, saying "that is not an appropriate response to your situation", to which Drax responds with "you are a coward". Manta informs Drax that he will be held until a proper trial is scheduled. Drax calls the whole thing "an ill-thought-out retaliation" for the Guardians helping to rescue a time displaced Jean Grey from the Imperial Guard, who kidnapped her to place her on trial for her crimes as the Dark Pheonix (which she technically hadn't committed yet as that was still in her personal future), as shown in the Guardians/All-New X-Men crossover, 'The Trial of Jean Grey. This riles Gladiator, who insists that the Guardians are no more and that Drax will be punished, to which Drax simply says "I will end you" (man, you really want to get a rise out of him, don't you?). The purple ball he is encased in is then pushed into a separate room, where he sadly says "Yvette...it's happening again". 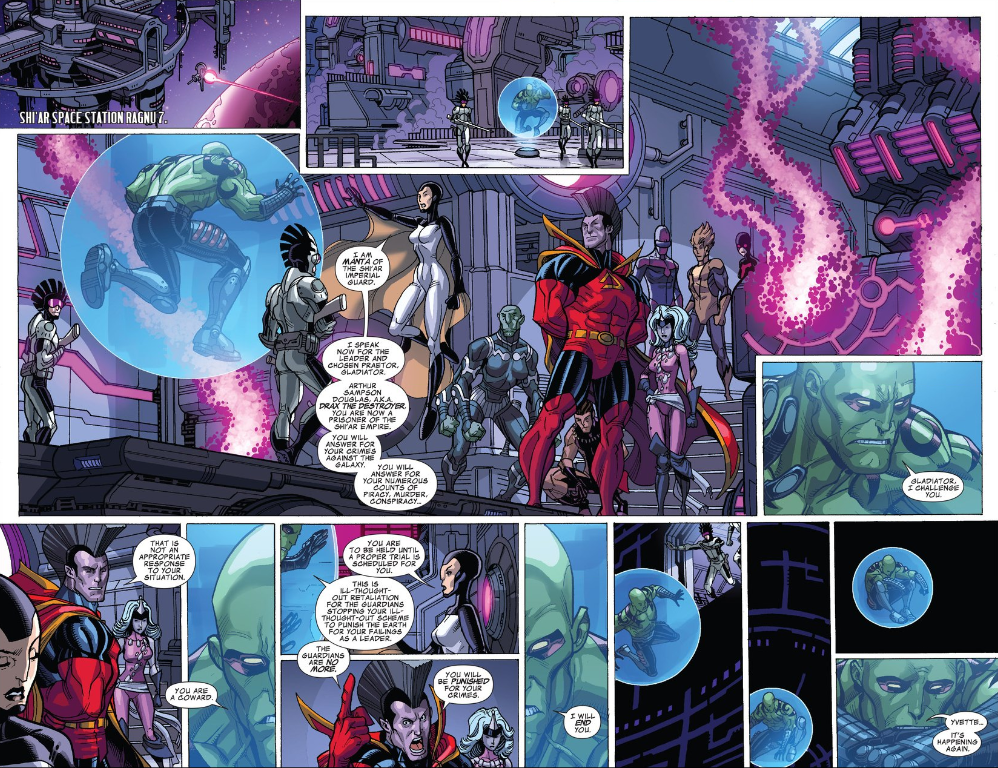 Back on Knowhere, Venom is trying to communicate with some of the local aliens, focusing on a couple who happen to be attractive females. Unfortunately, those women just laugh at him. An annoyed Flash starts to head on, when suddenly he is greeted by his Avengers team, Hawkeye, Black Widow, Beast, his supposed girlfriend Valkyrie (seriously, what's the deal right now with those two?) and Captain Britain (if you ask me, this guy deserves more attention). Beast answers Flash's question of how they found him, saying he generated a lot of subspace chatter. Captain Britain tells him that they came for him because he's needed back on Earth. 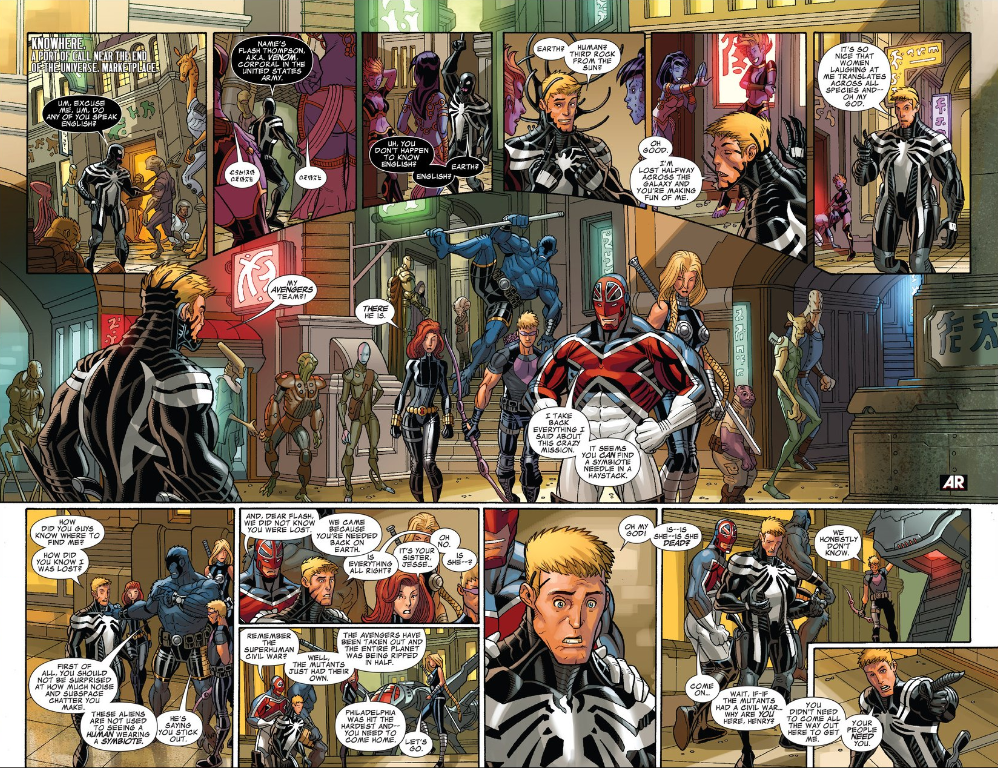 Apparently, the mutant equivalent of Civil War has just happened. The Avengers have been wiped out and the planet itself was being ripped in half. Philidelphia (where we last saw Flash in his own series) was hit the hardest. Flash however questions why Beast would accompany the team when his own people would need him more. "Henry" tries to brush it off by saying that Flash would do the same for him, but the team recognise they've been rumbled -- with "Beast" & "Black Widow" commenting about the story being too big and elaborate -- and open fire on Venom with alien weapons, demanding he get on the ship. Flash attempts to get away, but "Captain Britain eventually lands a shot, hitting Venom square in the back. As Flash passes out, he asks "why?" As if to answer, the "Avengers" reveal their true forms...Skrulls! 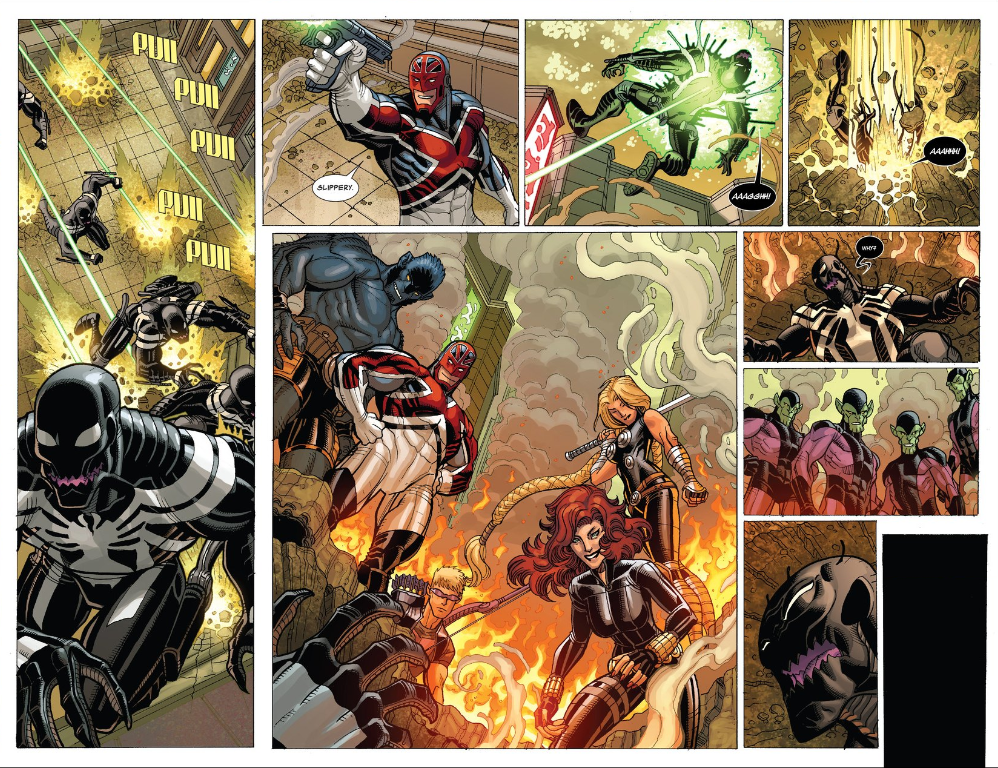 Elsewhere, on an Acanti, a race of whale-like beings used by the Brood for transport across the galaxy (because the Brood are frakakta trochoids), the Queen of the Brood instructs her servants to "prepare the creature", as they have arrived at their destination. The creature is of course an unconscious Groot, who the Brood drag to the tip of the Acanti's tongue. Groot quickly wakes up though and starts fighting off the extraterrestrial parasites. The Brood Queen yells "NOW!" at which point the other Brood swarm Groot, pushing him off the Acanti and towards the planet's rocky surface, with several Brood falling after him. Landing on a large rock, Groot is bisected, though as he's a living tree he can cope with losing half his body. The Brood are not so lucky, bursting apart on impact with the ground. Lifting himself up, Groot yells for help, but it's clear that the planet is uninhabited, which is very likely why the Brood have stranded him there. 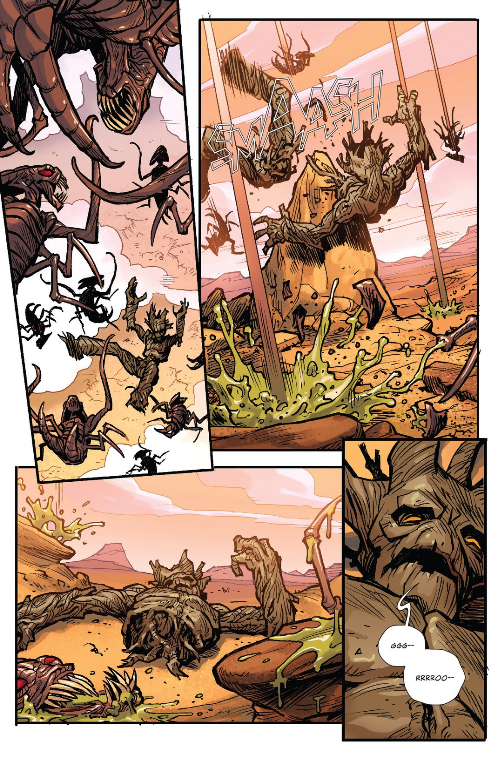 Finally, on Planet Spartax, Star-Lord is being led through his father's palace by the Spartax Royal Guard and J'son's aide, who announces to the observing civilians that Star-Lord is under "palace arrest" and he'll be held accountable for his crimes against the Empire, as well as those of his "fellow terrorist partners". Peter suddenly asks the guards to wait, asking the aide to tell his father that he's changed his mind, that if J'son lets the rest of the Guardians go, Peter will be whatever his father wants him to be, and in return, the Guardians will disappear and give Spartax no more trouble. The aide however, replies with a smirk that they are past the point where J'son can make that deal. He says he will convey Peter's message to his dad (yeah right), but Peter decides the hell with it and headbutts his element gun, which one of the guards happens to be carrying. The weapon fires, killing another guard and giving Peter the opening he needs to escape. Running helter-skelter towards a nearby balcony, Peter leaps off it in nothing but a t-shirt and boxers... 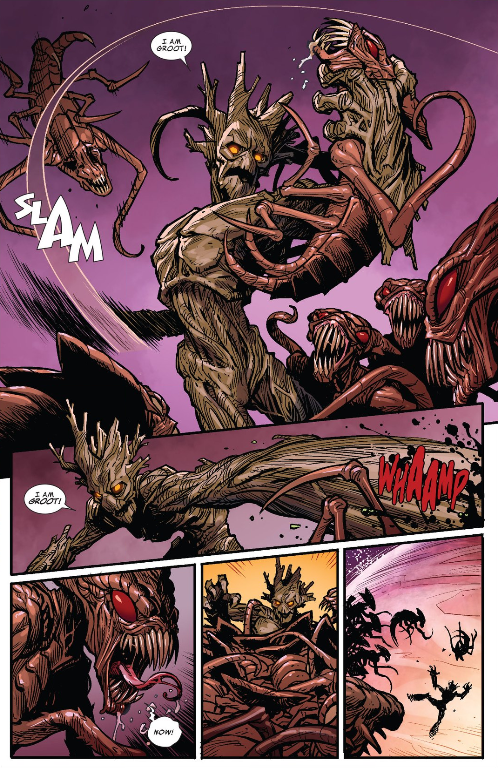 Unfortunately I can sum this up as being the filler issue. Not a whole lot happens here apart from seeing where the Guardians have all been sent individually and the "punishments" they all face. This issue is also false advertising as we don't actually see Captain Marvel in this issue at all. Thankfully, this is Brian Michael Bendis writing, someone known for and very adept at decompressed storytelling, meaning this issue is kept afloat with plenty of snappy dialogue and character moments for the Guardians.

Rocket is perhaps the most interesting character to witness in captivity, as we see a rare moment of vulnerability from him since his current predicament with the Kree likely draws up unpleasant memories of his origin. If Gamora has a defining character trait in this issue, it's that she's an kick-ass fighting machine! Watching her fight off the Badoon warrior/slave things is pretty awesome, though Bendis keeps the situation tense by reminding us that Gamora isn't invulnerable. Drax's confrontation with the Shi'ar is surprisingly comedic thanks to Drax's blunt nature and constant jibes to Gladiator. You can tell from the way he's getting to him that these two will come to blows at some point later on. This also shows that Drax, for all of his bluntness, is much smarter than he looks, which shows how far the character has come from his days as the cosmic equivalent of the Hulk in a purple outfit. 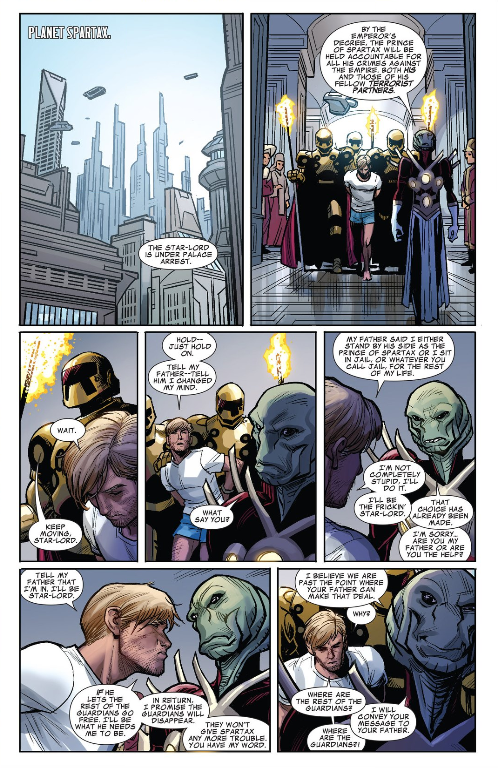 Venom's scene also provides some comic relief before the Skrulls show up. Despite it being obvious from an outside perspective, I admit I was briefly fooled as the Skrull's haven't appeared beforehand in previous issues, not even in the meetings J'son has been holding with other galactic leaders in the Negative Zone, a clever move on Bendis' part. I would have liked to have seen some interaction between Flash & Valkyrie, even if the latter was a fake, as there's been no interaction between them since Flash first arrived in Philadelphia back in Venom #30. Groot's "punishment" by the Brood made sense as he's apparently one of the few life-forms they cannot absorb, so marooning him on an unpopulated planet is the best bet from their standpoint. As for Star-Lord, while his character moment came in the last issue, we get to see how the servants, or at least the aide of his father views him. The thing is, if Peter did take up his father's offer to become his right hand man, then the aide would really be out of a job, which means Peter "changing his mind" wouldn't have been passed on to his father anyway.

Like the previous issue we have multiple artists present. Nick Bradshaw once again does a great job capturing the madcap visuals of the Marvel Universe. He's joined by Cameron Stewart for this issue, who illustrates the last few pages with Groot & Star-Lord. While there is a difference in their respective styles, the change from one to the other isn't jarring since they are overall similar enough. Stewart's work also looks great, the bit where Peter Quill leaps out of the palace kind of reminded me of a scene from The Fifth Element where Leeloo leaps into the future New York traffic. Like I said, the plot doesn't progress much here beyond showing us the current predicaments of the Guardians, but the dialogue, art and atmosphere makes up for it, which means there's still a lot here to enjoy... 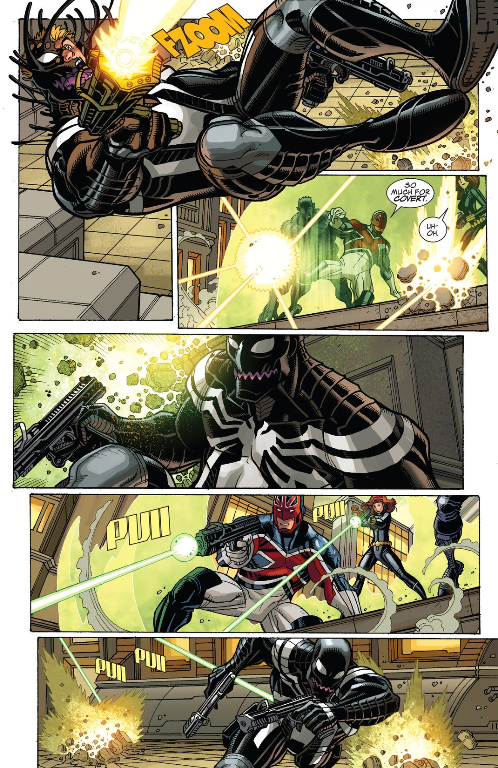