This story begins way back, when Spider-Man 2099 first got stuck in the current timeline in Superior Spider-Man # 19.

In that issue, Spider-Ock went missing for a while as he was zapped out from existence. This issue covers what happened in the time he disappeared.

Spider-Ock finds himself stuck in the year 2099. He meets Miguel's brother, Gabriel, whom Peter Parker had met before. Otto however has no memory of Gabriel. Gabriel, thinking Spider-Ock is Peter, brings him to Miguel's apartment, giving him free access to anything he needs to get back to his time.

Otto, takes advantage of the situation and learns everything he can about time travel and what is needed to do it.  Very soon, Otto steals whatever items he needs to build his own time travel device. In the process, he also recreates Miguels computer avatar to look like Ana Maria.

The Superior Spider-Man time jumps successfully, but finds himself in a different universe altogether. He soon finds that the Spider-Man of that universe has been killed, along with the Fantastic Four! Realizing that this is not his universe, Otto decides to try again. He repetitively fails several times, noticing that in each universe, Spider-Man is killed in the exact same manner, leading him to conclude that the same killer is jumping across universes and committing these murders.

Spider-Ock, realizing that no single Spider-Man is strong enough to take out this killer, takes it upon himself to gather as many Spider-Men as he can before they get killed so they can unite and try to take out this spider killer. 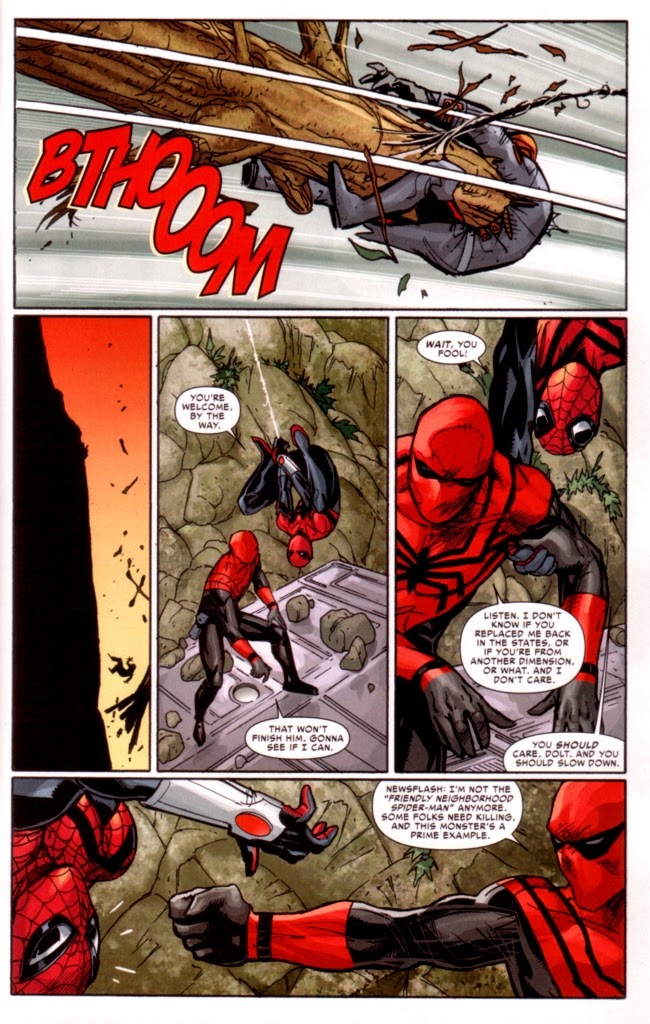 Probably among the most notable of the Spider-Men, is a version of Peter in which Peter has given up trying to be the 'Friendly Neighborhood Spider-Man." This Spidey has left the USA, and his family and friends behind. He still misses them, Mary Jane and Aunt May in particular, but had decided upon Gwen's death that he had to kill his enemies - Punisher style. He enlists the help of Wolverine  to help train him to be a killer and seems to have a romantic interest in a character called Alex (girl, just in case you're wondering.)

As with the other Spider-Men, Otto manages to time jump in time to help this Spider-Man fight the enemy. He explains his plan to gather Spider-Men and eventually kill the enemy. After much persuasion and convincing, the Spider-Man of that time agrees to follow Otto, after having seen Wolverine killed at the hand of his pursuer. Spider-Ock convinces that Spider-Man to follow him on the grounds that they are most alike, and another Spider-Man who is also willing to kill when necessary must be present in the team if they are to succeed.

While I have summarized the two stories as much as possible, I would like to highlight that there is so much brilliance that takes place in this issue alone. It serves as a perfect build up to what seems to be a great story in the making.

Upon hearing that the Superior Spider-Man would be returning, it was hard to imagine a situation in which he could return and yet play such a large part in the story. This issue however has just made Spider-Ock, most critical to the whole story line in my opinion, and possibly be the only chance the spiders have against what is coming.

It is still unknown whether the Superior Spider-Man knew or recalled all that had taken place when he returned to his correct timeline in issue # 19, however, if he did remember, it would be utter genius of him to sacrifice himself, knowing fully well that he would be able to return at such a time as this.

By the end of the whole Spider-Verse story line, we may very well end up with the Superior Spider-Man and the Amazing Spider-Man coexisting at the same time in the same universe.

The Punisher version of Spider-Man displays how our Peter may have turned out in another universe. While Peter is about 99% always a good guy who does not kill, there is a 1%, or less, of him that at times certainly wishes he could kill his enemies and finish them once and for all.  We see in this character a different side of Peter that is usually hidden, which will certainly be most entertaining. 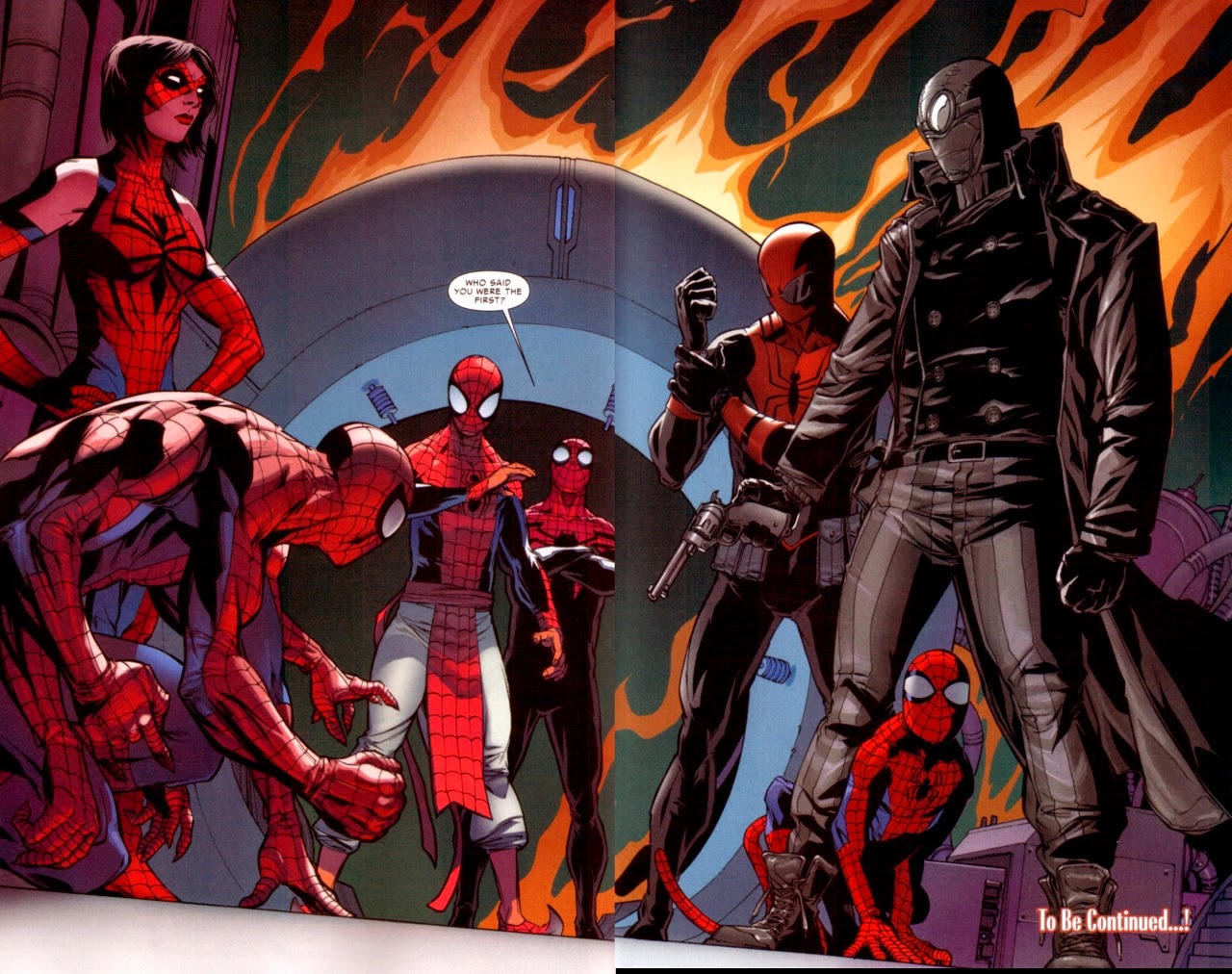