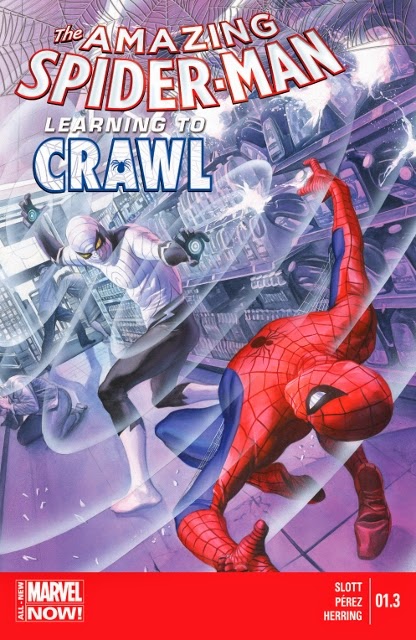 This issue begins with Clayton, complaining that he is unable to use any of the footage recorded in The Amazing Spider-Man # 1.2, due to Spider-Man making him look like a fool.

Meanwhile, Peter returns back home to find his Aunt May extremely worried and concerned. She has found an envelope of money and some other chemicals that Peter had used to make his web fluid. Seeing the two items however have cause her to come to the conclusion that Peter had been making and selling drugs to make money. Peter gives a clever excuse for both, without revealing where he actually got the money, or why he had chemicals in his room, leaving Aunt May quite satisfied. 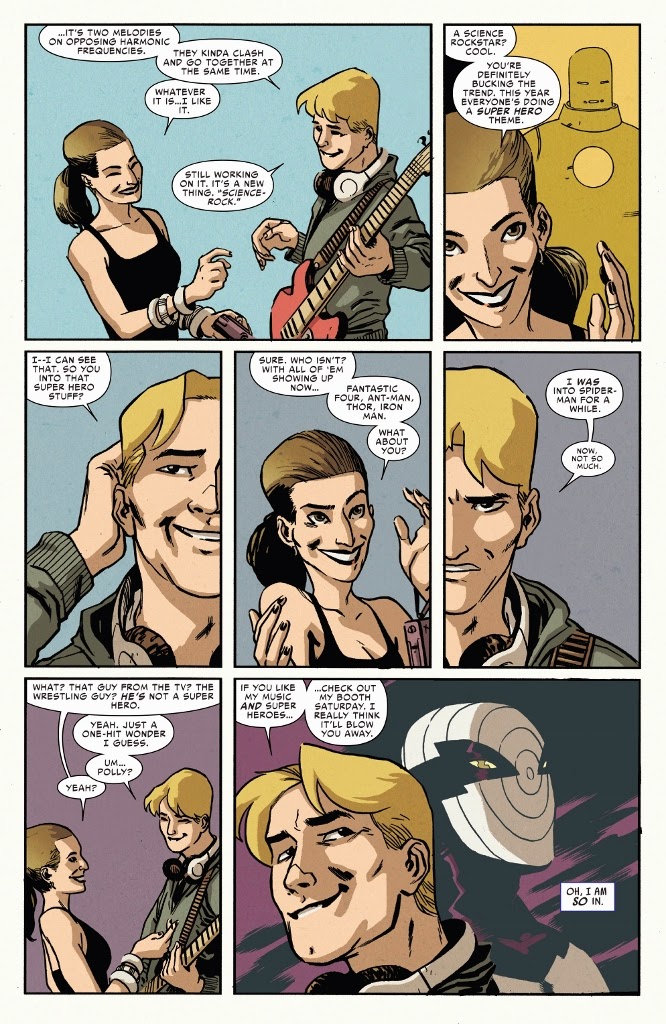 Elsewhere, most of the kids participating at the science fair are busy preparing their stuff, Clayton included. A girl- Polly, is quite impressed with Clayton's work, leading Clayton to believe that she may be interested in him. He also tells her to come to the fair on Saturday and check out what he has in store. Hearing that she likes superheroes, he plans to make an appearance as Clash.

Like all the other students, Peter is also trying to figure out what he should showcase at the science fair in hope to win a scholarship for college. While testing out some things, he overhears his fellow classmates talking about how they would like to see a close up picture of the Vulture. This gives Peter the idea of using his abilities as Spider-Man to get a close up shot of the Vulture.

He borrows Uncle Ben's old camera from Aunt May and proceeds to find the Vulture. While snapping photos, he gets attacked by the Vulture! Thankfully, the camera and the photos were not damaged. 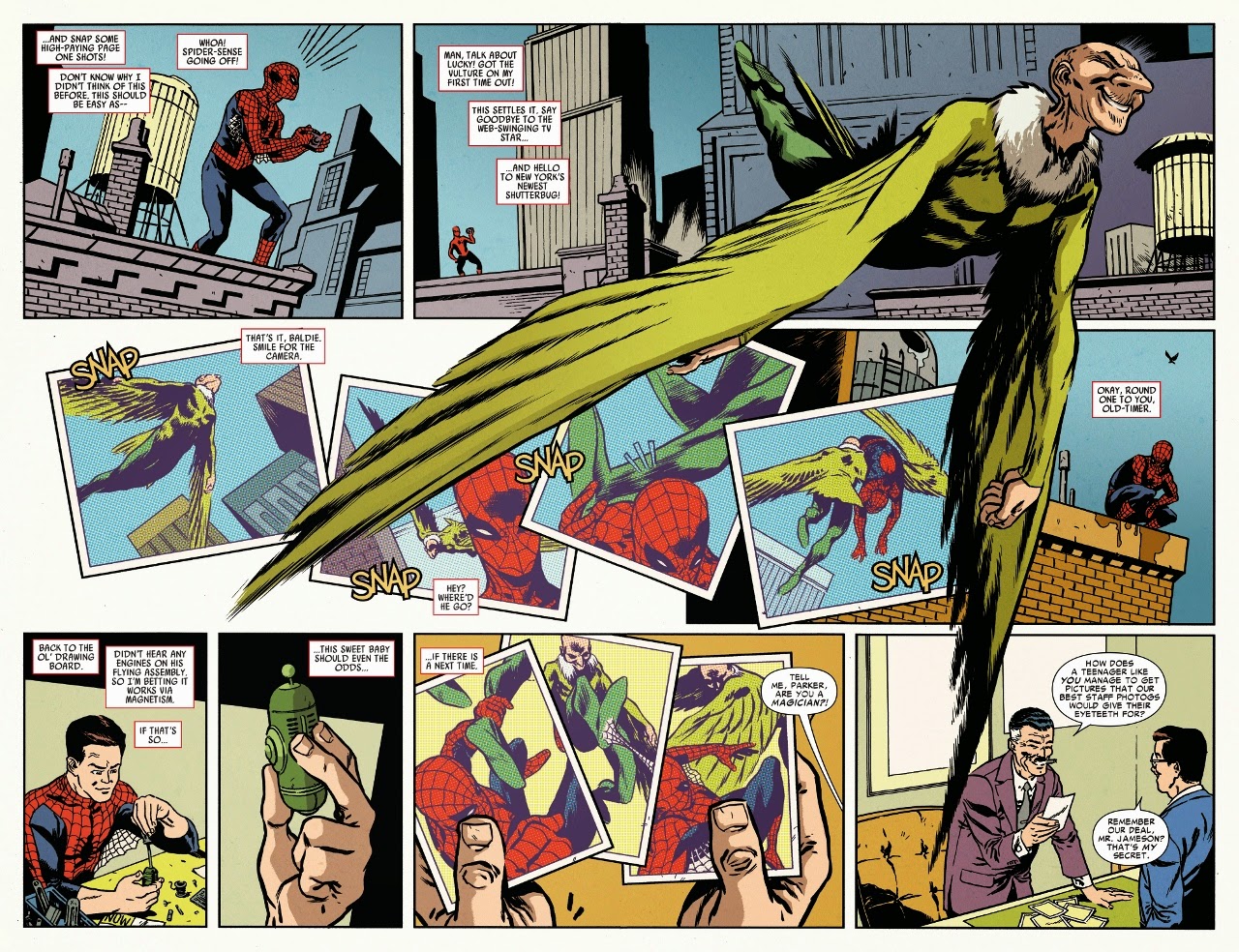 After the fight, Peter goes back to devise a plan to counter attack the Vulture the next time they meet.  He invents an anti magnetic device, seeing that the Vulture uses magnetism to fly. He also decides that he will use that as his project at the science fair. Over at the bugle, Jameson is ecstatic about the photos of the Vulture and pays Peter handsomely. Peter decides that if he keeps earning cash from photos, he will no longer need the scholarship he hopes to get.

The next day, at the science fair, nobody seems to be impressed with Peter's invention! His classmates attribute it to him not wearing a superhero costume like all the other kids. Aunt May, who is present at the fair, somehow starts a conversation with Peters friends, in particular - Polly. Aunt May is so proud to know that Peter has friends, even more so, a friend who is a girl! She invites Polly to dinner with them and Polly agrees. This sparks some jealously from Clayton.

Clayton, very soon changes to Clash to get some attention. However, Peter sees Clash as a threat, with his spider sense going off. As such, he too changes to Spider-Man and attacks Clash. 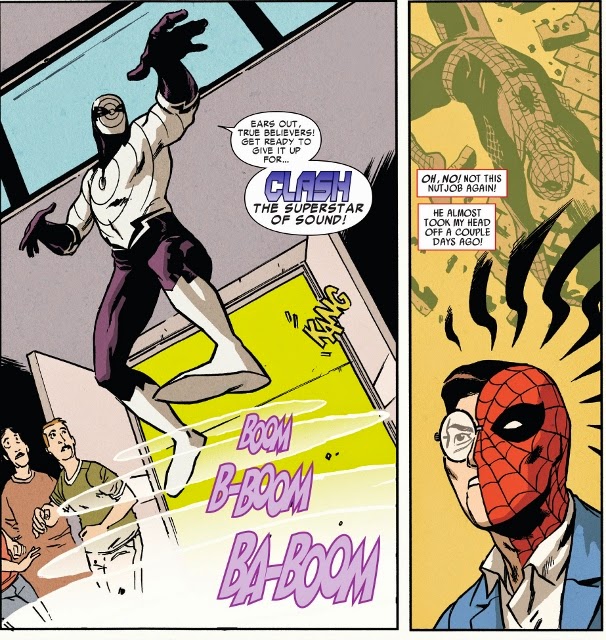 This has everyone in the room terrified, especially Aunt May, who despises Spider-Man. Clash's sound waves cause destruction in the hall, endangering the others. Eventually, Spider-Man stops Clash using his anti magnetic device he created to nullify Clash's abilities.

Clash runs away, changing back to Clayton Cole, upset again at Spider-Man. Peter on the other hand has also changed back to check on Aunt May, who is so disappointed at Spider-Man, saying that he was not raised properly and that whoever raised him must be ashamed.

Despite the long summary above, there isn't actually very much taking place in this issue. We see more of how Peter starts taking photos for the Bugle, and how Aunt May despises Spider-Man. From the start, Peter is already conflicted about Spider-Man, not having the approval of those close to him.

We also see how Clayton actually has reason to hate Spider-Man. However, like most of Spider-Man's villains ( except the goblin), Clayton is just an ordinary person who has gone slight the wrong way and is not actually a bad person.

Probably one scene that didn't make sense was when Spider-Man was attacked from behind by the Vulture. In the issue, Peter says he was attacked without warning because he could not hear anything coming behind him as the Vulture was using magnets. While that may be true, his spider sense should really have warned him of that.

Unfortunately, this issue does not leave the reader really wanting more of the story. While my opinion may differ from others, I don't find this story all that interesting, but as the title suggests, this whole story is about how Peter 'learnt to crawl' as Spider-Man. Keep that in mind, and the story line would be more bearable.