Last time we saw our friend Deadpool he wasn't doin too good, having just been once again decimated by the murder and chaos driven red symbiote menace: Carnage. However, fate has intervened and somewhat leveled the playing field.

Will it be enough for DP to put the cap on ole' Carnage , or will merc. with the mouth just end up pissing him off more? Find out now, and keep reading for my thoughts and analysis.


So Deadpool is the proud new owner of the Life Foundation Symbiotes...

Anybody remember these guys? Oh you thought they were wiped out after Lethal Protector? wrong Or they never returned after Seperation Anxiety? Nope. Or that Eddie Brock hunted'em down and killed'em off in the agent venom series? Not quite. At least 4 outta the 5 survived and were kept under gov. control, probably for just such an occasion. Now DP's gott'em and they've transformed him into 1 very super powered assassin. And so the hunt continues.

Seemingly rid of DP, Carnage and Shriek arrive at an insane asylum where Carnage questions the Psychiatrists on his theory of chaos. Obsessed with proving his point & DP wrong, Carnage fails to notice how DP has effected his mind & thus his purpose. As Carnage tortures the Dr's for answers, a bullet comes wizzing through the window, splitting Carnage's eye. Off in the distance DP sits in a tree with his sniper rifle and canine companion. Both of them are covered in symbiote. So DP sends in the dog to chomp'em to bits but Carnage retaliates.

The new improved symbiote DP takes this opportunity to demonstrate his new found strength,sight,and speed to assault Carnage. DP proudly announces his symbiotes: Phage, Lasher , Riot, and Agony, all having contributed to his power supreme. The inmates witness this fight and believe it to be ghosts and demons.

Lasher , the war dog symbiote  attacks Shriek who blasts it revealing the injured body of Carnage. Shriek is instantly shocked and guilty over harming her lover, Carnage. Yet Carnage informs her it's just DP changing appearance to trick her.  Despite this warning, Shriek runs off due to emotional trauma. DP does what he does best and gloats while taunting Carnage. DP unleashes a plethora of guns from his outstretched tendrils which proceed to all fire at once. 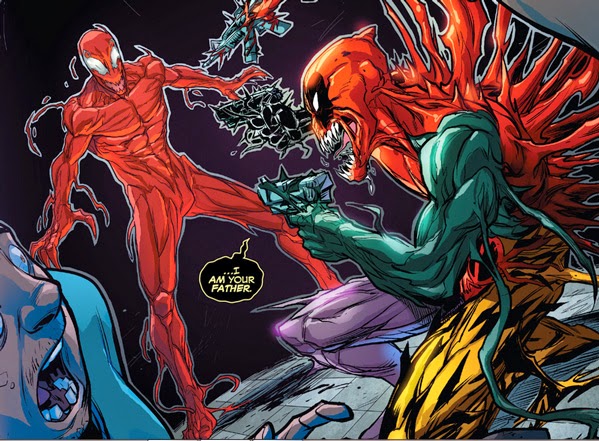 Carnage is not impressed, and just when he remarks that DP will have to do better, DP tosses him through a wall (4th wall perhaps?). Preterbed, Carnage launches himself at DP and receives more gunfire for his effort.  Carnage admits he came to the asylum seeking answers to disprove DP's "deeper connection" theory, and that no one, and nothing, except Carnage himself is guiding him, but DP retorts that Carnage DOES have a conscious and DP is responsible for leading him to their current location.

DP's argument insists that Carnage shares some type of mental / spiritual link to himself and other psychotics, even going so far as to transform into various spirit animals.

Again Carnage stubbornly refuses the idea, sending DP flying with a swipe of his tendril. DP does his best Fog horn Leg horn impression while trying to cram his guts that were spilled by Carnage back in his stomach. Carnage takes the opportunity to flee the scene. 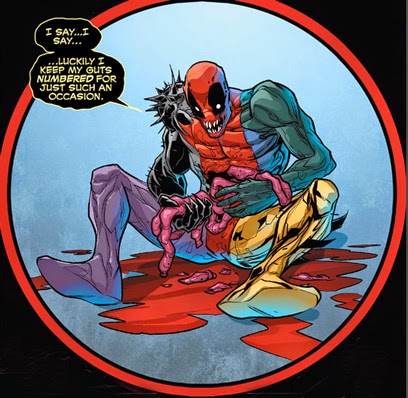 Instead of giving chase, DP attacks Shriek as the scene shifts to Carnage hearing her scream in the distance.
He naturally follows, leading him to a message on the wall (seemingly written by DP) stating"You will be punished for your anger." The inmates warn Carnage "Don't hurt the scary lady." seemingly referring to Shriek but Carnage continues pursuing DP, attacking him from behind only to realize the body was actually Shriek in disguise as DP.

Carnage is very upset not so much because he may have killed Shriek but because he realizes that the warnings he ignored from his fellow loonies were trying to help him, and that by ignoring them out of ego he ended up hurting himself AND proving DP's point. Carnage's ego is damaged and causes him to turn himself in to the police, where he sits in prison  pondering his self control and waiting for DP's notions to leave his head.

Meanwhile Deady McPool aka Deadpool says a final farewell to his furry friend and the symbiotes 4, as he considers his success and next mission.

So in the end it was brains not brawn that defeated the beast. The whole time they were waging a physical war Deady was also waging a mental one. His plan paid off wit ha little..Ok a lot of help from his symbiote pals. I for one really enjoyed seeing DP merged with the life foundation symbiotes - Scream. Even though Rick Remember kinda made a point to kill them off in his run of Venom, I felt that was premature and the potential for them outweighed the negatives. Still, no sign of the most famous of the group; Scream. What a pity, but I'm betting Cullen Bunn has bigger plans to bring her back.

In my previous review I mentioned how I thought Scorn might show up and although that didn't happen it felt the story turned out just fine, utilizing Shriek as the straw that broke the camel's back. Which leads me to my next question, Did Carnage kill Shriek? I doubt she actually died and knowing her, I bet she would even forgive him seeing as how killing is ironically their way of life and strongest bond.

As for our gun touting hero, I think this is yet another straw in his hat, another notch on his belt. Who else can say they out crazied Carnage? Drove a homicidal maniac insane? And if you need proof of Carnage being insane, why else would he intentionally shut himself up in a prison cell and stay there? Yes Sir Carnage will have to think twice before crossing paths with Deadpool again, unless he wants another spoonful of Psychology, after all Deadpool called himself the Dr. Phil for loonies and I think he's earned it.
Still, it's hard to believe he didn't want to hang onto the symbiotes at least a little while longer.

In the end Carnage's stubborn but fragile  mindset caused him to become paranoid, overly aggressive, and predictable, allowing DP to take advantage. I've never seen Carnage defeated in such a way.
I wonder if carnage will learn from this mistake? Nah I can't really imagine Carnage becoming rationale, that would be.. anti Carnage.

Despite some slow roads or lack of direction, I enjoyed this short series for it's action and artwork. Outlandish? yes, Gratuitous? You bet, and it got the job done.It provided an exciting confrontation between to similar psycho freaks. In hindsight, I liked it a little more than Superior Carnage.

So Deadpool poses the question what's next? Well skys the limit for DP as series and stories for him seem to pop up like dazies, but for Carnage I'd like to see him tackle New Warriors, seeing as how he has unfinished business with Kaine.

I truly hope you've enjoyed this review series, and would love to read your comments.
What did you think of the story? 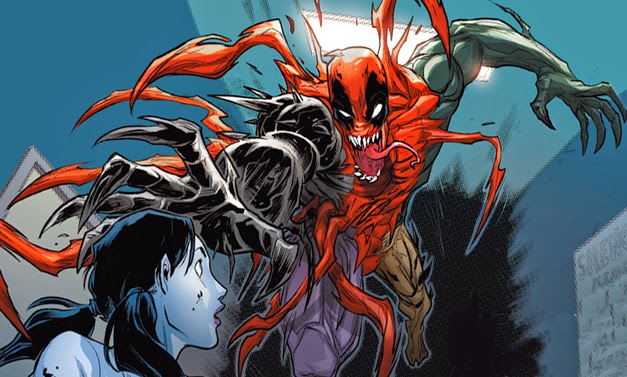