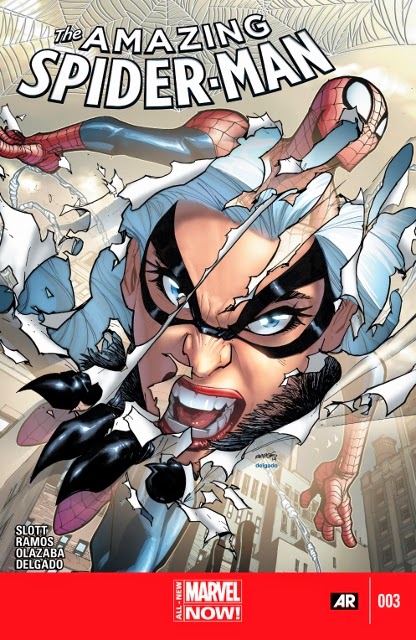 This issue begins with our 'other mysterious spider character', whom we have come to know as silk. She grows bored of her same old lifestyle, looking at old photos of her her family and brother. She tries to escape her home, only it isn't actually her home as we were previously led to believe. Silk is actually in captivity.

As she tries to escape, a prerecorded warning message from a young looking Ezekiel comes up, calling her by her real name - Cindy, asking her not to breach the security as she poses a threat to the world outside. Cindy finds it in her to listen to what the message has to say and stops trying to escape.

Elsewhere, the Black Cat has been busy breaking into penthouses and stealing their champagne and caviar, instead of stealing cash with which to buy champagne and caviar like she usually does. She's changed her style of doing things, realizing that everything in the city is already hers if she only reaches out to grab it.

In Alphabet city, Electro is struggling to sleep, having nightmares about what Spider-Ock did to him. In his sleep, he sets the whole building on fire and wakes up, furious at Spider-Man.

Meanwhile, in Parker Industries, Peter is trying his best to be a 'fun boss' different from Peter Ock, and different from what his employees are used to.  Peter invites his staff to go out with him on a field trip to test out their new 'Electro Tracking' equipment. 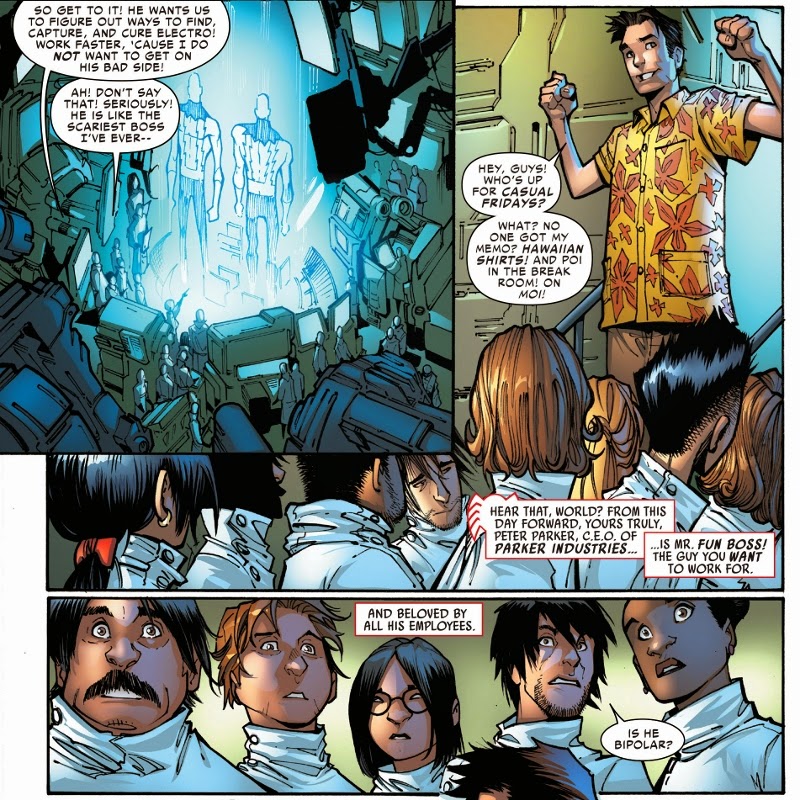 Sajani however, is not impressed with this new direction and thinks they should continue working on their initial project - developing nano tech. Ana Maria, knowing Peter's secret, understands the change, in that Peter, never wanted to start the nano tech project as that was Doc Ock's project. He also probably knows nothing about it! Regardless, Ana Maria offers to continue the project since she was close to 'Peter Ock' and knew how to complete it.

Peter's field trip takes him to the site where Electro started the fire. Though the firemen are already on the job, Peter changes into Spider-Man and tries to help. At the site is Ollie, Mary Jane's new fireman boyfriend, doing his best to make up for missing out on the Goblin War. ( He was busy driving MJ out of town) 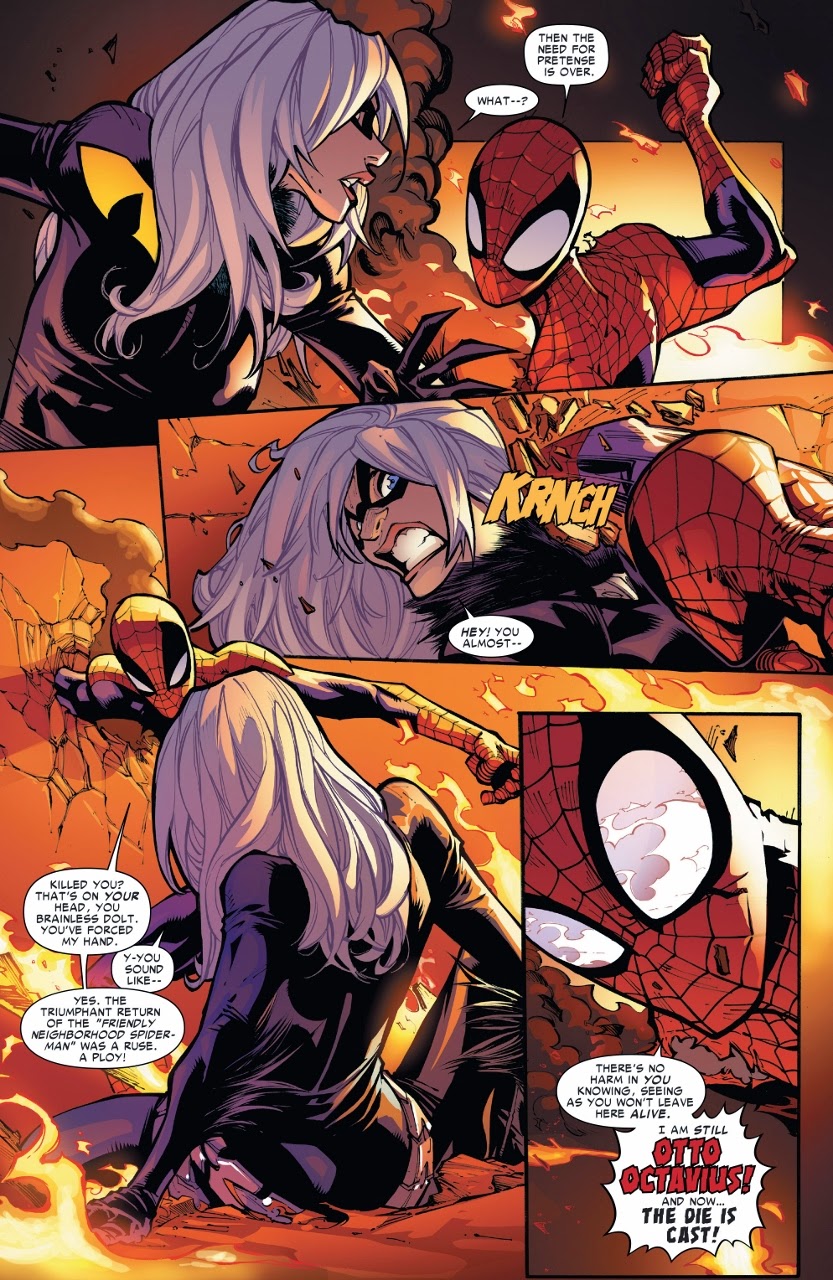 Spider-Man is caught on camera which catches the attention of the Black Cat. This changes the scene to Jameson, who is having an interview in The Fact Channel Studios. At the end of the interview however, Jameson is told that they actually wish to hire him, to which Jameson is delighted.

Back at the fire, Spider-Man helps Ollie, recognizing him as Mary Jane's new boyfriend. They manage to save a little girl safely, but Ollie runs back into the building immediately after, only to have some debris fall on him. Spidey rushes in to help, but is met by the Black Cat. Unaware to what had happened with him and Felicia, Spidey asks for her help.

Felicia is shocked at his wits but proceeds to attack him. It doesn't take long for Spider-Man to realize this was Ock's doing. He tries to explain himself to the Black Cat, but she does not care. As a last resort, Spider-Man attacks her, pretending to still be Doc Ock. This stuns Felicia and she decides to bolt.

Ollie is saved and escorted out of the building by Spider-Man. Mary Jane runs to greet her boyfriend, but Spider-Man is already gone watching from a far by the time she comes. 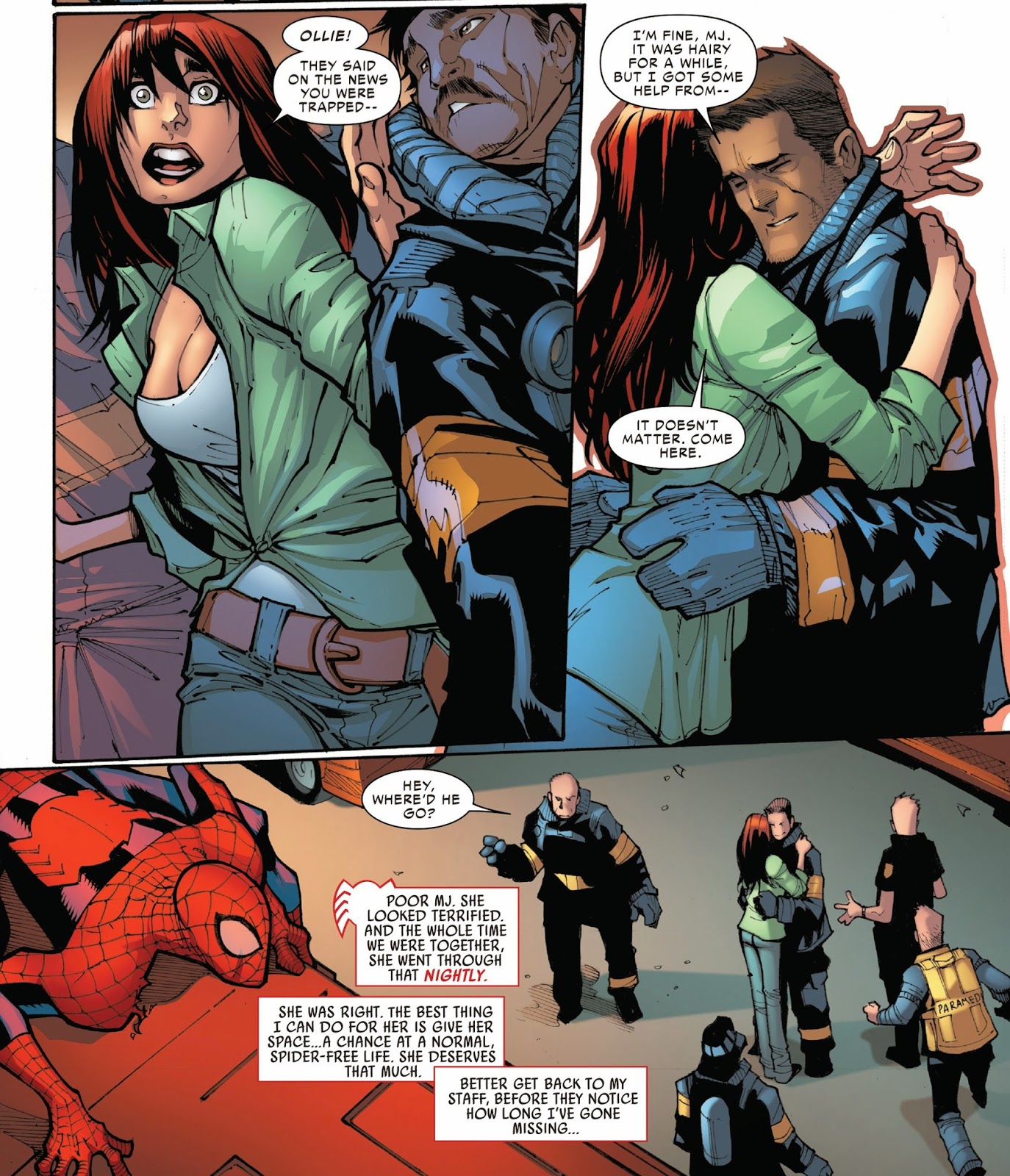 Meanwhile, the Black Cat has stolen some valuable and the Electro detector from the Parker Labs crew. She tracks Electro down and asks for his help to kill Spider-Man. 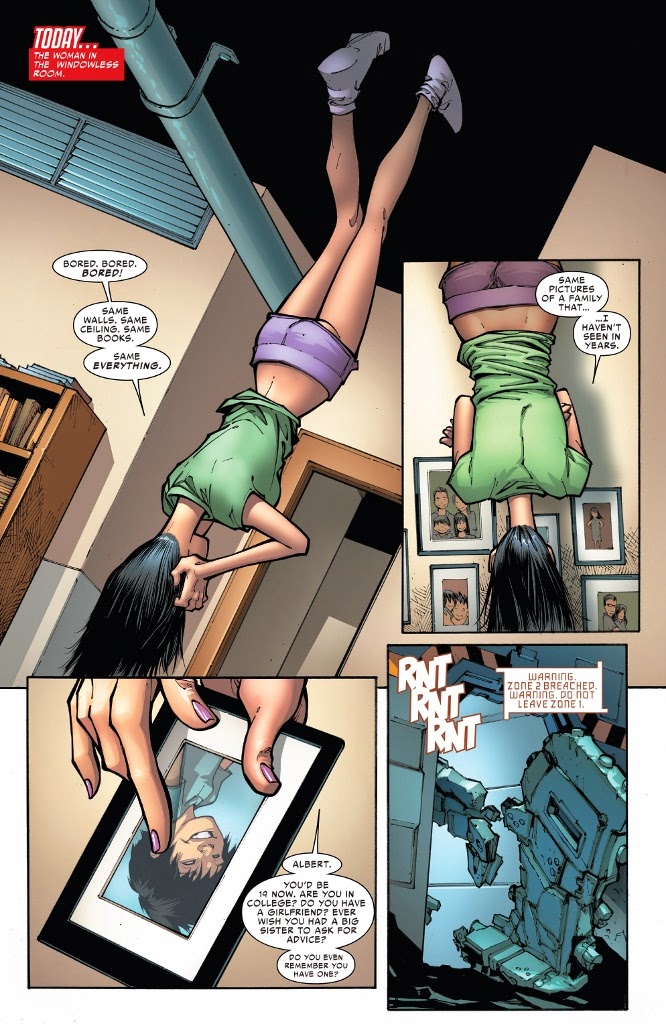 Starting right at the top, we now know that Silk's real name is Cindy. We also know that she has been held in captivity, for the benefit of the rest of the world as it seems that she poses some sort of threat. She has also clearly been living in holding for many years considering the old equipment in her residence. The prerecording of the young Ezekiel also further proves that she has been here for a long long time.

There is the slight chance that the Ezekiel in the recording was not the same one that we all know and previously read about. Given his involvement with the 'spiders' however, I think that is quite unlikely. Unlike what I had previously thought, Cindy/ Silk is actually a good person from the looks of it, purposely staying in captivity so the outside world would be safe.

What we do not know is whether or not the threat she once posed is still a threat to the world today, given the technology advances since her captivity. We also do not know if this 'threat' is even real. It could be all a gimmick to keep her in holding!

Next, on my topic from this issue worthy of discussion would be Black Cat's new persona. She has gone from anti-hero to full on bad guy here. She has changed her costume, to a more burglar type costume - more practical and less revealing, probably signifying a new start.

After Spider-Man's explanation that it was Doc Ock who hurt her, Felicia still refused to listen to reason. As far as she is concerned, it was the Spider who hurt her, and it will be the Spider whom she will get revenge on. By the end of the issue, she certainly knows for sure that Doc Ock did at some point posses Spider-Man's body, yet she refuses to care and enlists the help of Electro.

If this had taken place before the mind wipe however, things might have been a little different, as back then, she knew Peter Parker was Spider-Man and considered him a friend, rather than a masked character.

Mary Jane, has returned to her worrying girlfriend role, and Jameson has a new job, back in the media! Nothing else in this issue is to much to shout about.