This issue focuses on the first ever appearance of Clash, a superhero costumed character, based off Spider-Man.

In The Amazing Spider-Man 1.1, we saw Spider-Man's biggest fan create a new costume for himself, loosely based off Spider-Man's own designs. In this issue, the kid who designed the costume, intends to make his debut for the world to see. 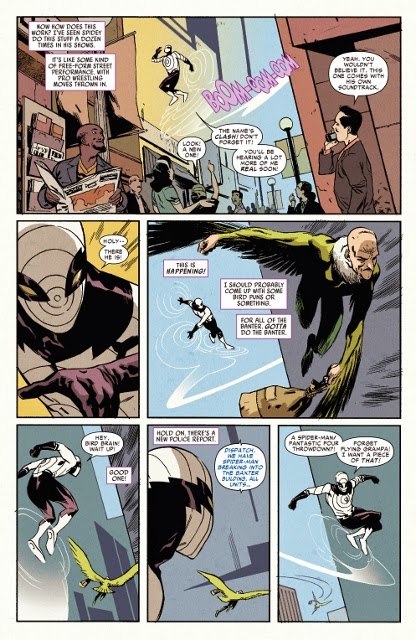 Using sonic rays, blasting out from his hands and feet, Clash is able to fly in the air.
He spots Vulture and tries to take him down for his first appearance but soon changes his mind when he hears on the news that Spider-Man is having a fall out with the Fantastic Four! Thinking that would be the place with the most attention, Clash decides to head in that direction for his grand debut. When he reaches the scene however, Spider-Man is already leaving.

Back at Midtown High, Parker is having another chat with the principal, who is asking Peter about his disappearances and about the black eye he has. Peter blames it on Flash, even though he actually got it from a punch by Ben Grimm of the Fantastic Four. Peter watches as Flash is punished by the principal and feels a little guilty.

Later, principal Flannigan introduces Peter to some nerds from the 'A.V club', whom Peter would be able to interact with better while getting out of Flash's way. Peter somewhat enjoys the company and is attracted to a competition at a science fair, held by Osborn Chemical, to which the grand prize is $10,000.00!

At this point, Peter is still looking for ways to get some cash to help support Aunt May and pay for the bills. Elsewhere, Clayton, aka Clash, is demonstrating his Sonic Pulse generator to his dad. He plans to showcase his invention at the science fair. Clayton's dad is  so impressed, he gives him some extra allowance!

Clayton decides he will use this extra money to attract Spider-Man, and hire him for a personal appearance. He approaches Spidey's first marketing agent, Maxie Schiffman to find the whereabouts of Spider-Man. Max however has no clue where Spider-Man is as he had disappeared after the tragic incident during the last show.

On one trip to the science museum, Peter gets a message on the same wavelength as his Spider-Sense to meet at the roof at 10pm, stating that it would be profitable for him. Peter falls for the trick, and we later find out that it was the Chameleon, dressed as Spider-Man, causing some trouble to further ruin Spider-Man's name and add to the list of things Jameson can accuse Spider-Man of. In the meantime, Aunt May continues to worry about Peter's strange behavior. 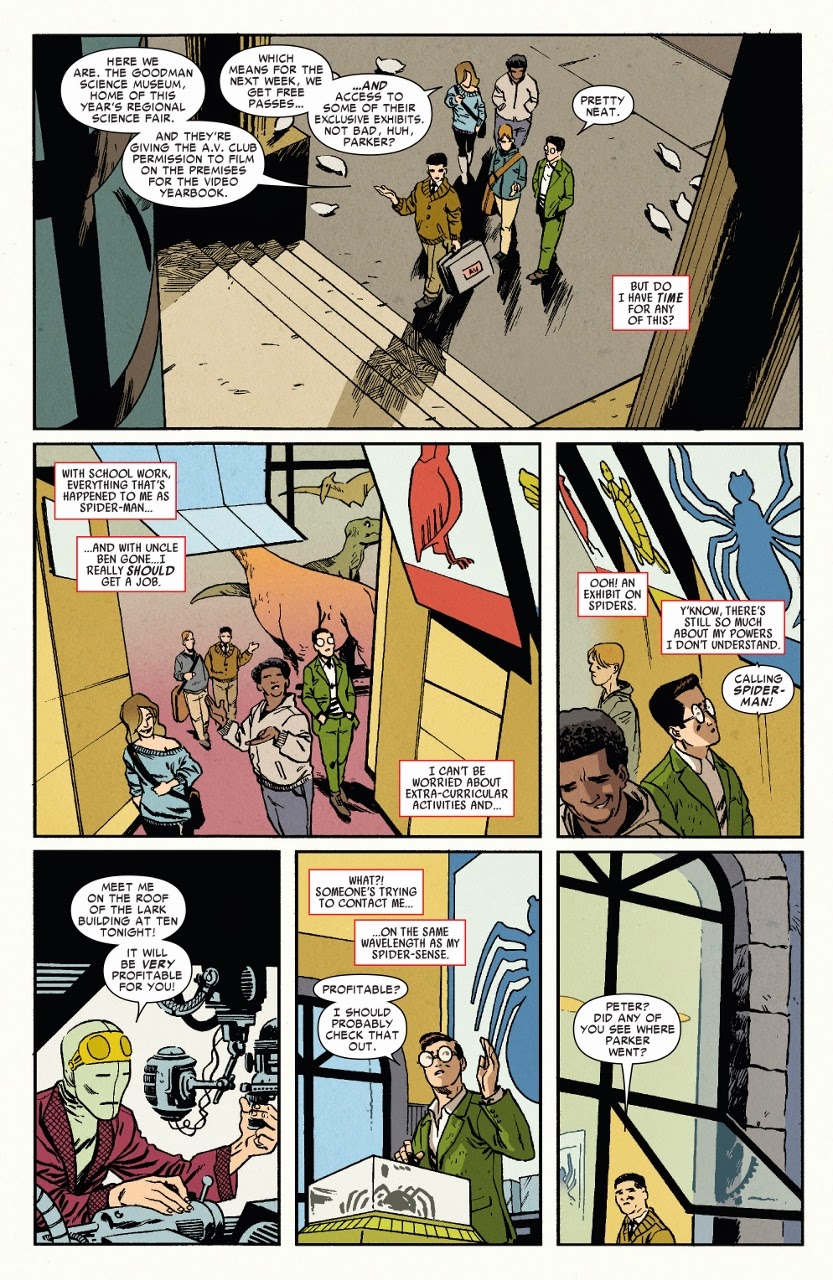 The following day, at school, his new group of nerdy friends from the A.V club are talking about Spider-Man and what the bugle has to say about him. Just then, Flash comes in to interrupt, stating that the Bugle is full of lies concerning Spider-Man. Flash expresses his loyalty to Spider-Man, knowing fully well that Spider-Man often gets blamed for stuff that he did not do. He said this while hinting to Peter about their earlier incident, where Peter had blamed Flash for punching him, when they both know that did not happen.

On the press, Max Schiffman, Spider-Man's former agent, makes a statement about how the real Spider-Man would not do half the things they say. While on press, he also makes a quick invitation to the real Spider-Man, wherever he may be, to come find him as he has a new gig lined up for him.

We later see Spider-Man walking into Max's office. Max introduces him to Clash, who wants a one on one battle, recorded for the world to see. Clash, thinks that by having a fight with Spider-Man, he would be able to get some attention. Spider-Man agrees at first. Halfway mid battle, Clash, upon a sacarstic statement from Spider-Man taunting his abilities, decides to crank up his sonic blasters a little, actually hurting Spider-Man.

At this, Spidey calls it quits, and webs Clash up on camera and swings away, not at all what they had planned. The incident causes Clash to lose hope in Spider-Man, believing that Spider-Man does not care about others and only cares about himself and money. ( which at this point in time is half correct) 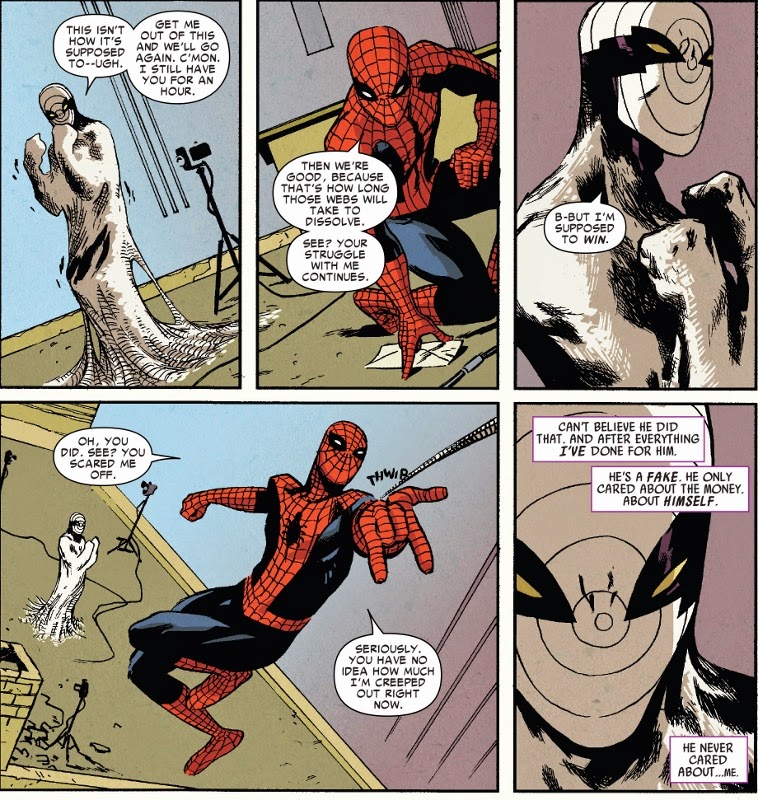 Later, Peter, feeling guilty for wrongfully accusing Flash of punching him, goes to principal Flanningan and apologizes. He makes amends with Flash, but loses the trust of the principal.

In the final scene, Aunt May has grown increasingly concerned for Peter and decides she has to unlock his room door to see what he'e been up to. When she opens the door, she gasps in shock at what she sees. (But we never find out)

This issue was a little dry for me. We get to see more action from a very much uninteresting new character Clash, who essentially wants only to be like Spider-Man for fame.

What is interesting about this story, is Peter's struggles as a young boy. Struggling to fit in, while being a superhero, and finding money to support his aunt. These are mostly very realistic struggles that many teenagers have to go through.

From one perspective, we can judge Peter for his irresponsible actions. On the other hand however, most ordinary people, given the same circumstances would probably just use the powers to rob money from others or from the bank!

This is a story about how Peter, against all odds, is still trying to legitimately earn cash for his aunt, while using his powers for good. We also get a glimpse of how Peter handles bad advertisement from the press.
As tough as it is to handle being wrongfully blamed, Peter eventually realizes that he himself did the same by blaming Flash for something he did not do.

Slowly learning from mistakes is something we all do, but as Spider-Man, it would turn out that Peter would have to live with the consequences of the mistakes he makes. ( most likely, a new supervillain called Clash)