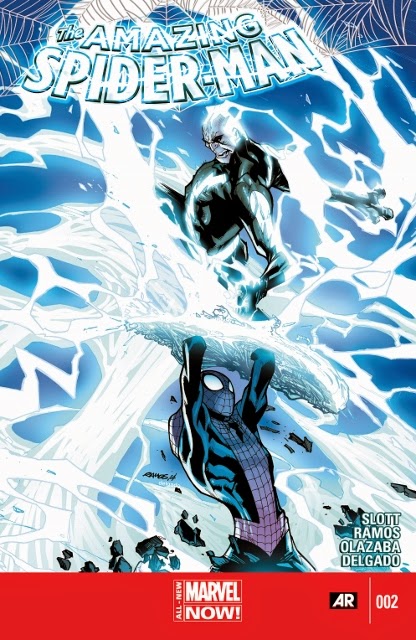 This issue begins with a new character, presumably the girl whom we just found out was also bitten by the radioactive spider that bit Peter Parker.

She is in her home, closed with absolutely no windows. Everything in her home is sort of old - big square tv, old computer monitor and VHS tapes! She also has years of supply of food. She puts in a video tape recording of a fight between Electro and Spider-Man. Most surprising of all however is that she has spider webs coming out of her finger tips! She also seems to know that Peter is Spider-Man.

Meanwhile, in Peter's apartment, Peter explains to Ana Maria his true situation. He admits to her that he is Spider-Man and that Dr Ock had been in his body for the last couple of months. Ana Maria immediately begins baking some cookies to help get over the shock. After hearing everything, she leaves, saying she needs to take a walk. Peter then gets a call from the Avengers, requesting he meet them immediately.

Elsewhere, the powered up Electro who is beginning to look more like the movie version of himself has more drama taking place in his life. Like in the movie, this scene here makes the reader feel sorry for poor Electro ( which is probably the point)

Electro visits an old friend, presumably someone of romantic interest. His other friends think he is nuts and he has no one to turn to but her. He explains how Spider-Man's experiments on him changed his appearance and his powers. While sharing a kiss with the woman however, he accidentally electrocutes her and kills her!

Over at the Avenger's tower, Spider-Man arrives 28 minutes late, wearing pants with his spidey costume. Captain America questions both oddities. Spidey explains how he had to wait 22 minutes for the cookies Ana Maria made to finish baking. He also explains that Dr Ock had changed his webbing formula so that it lasts much longer. As such, his pants were stuck on. ( He webbed himself some underwear in the last issue) Upon hearing all this, Spider Woman is convinced that this is the real Spider-Man. Moments later, the tests Iron Man run on him prove it. 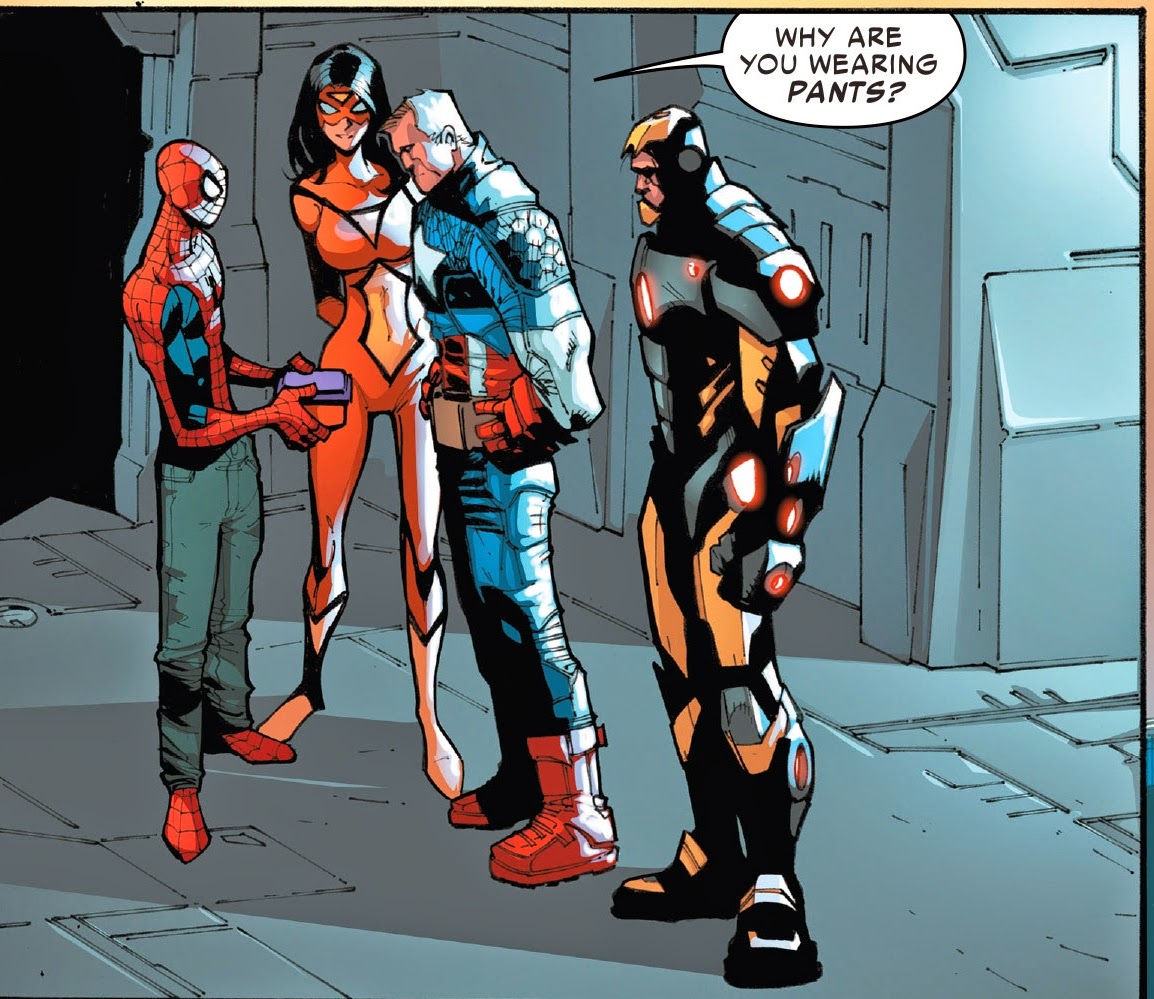 Spider-Man then, through the course of planned conversation, gets Capt America to spill the news on who the new Venom was. Upon hearing that Cap knew Flash Thompson was Agent Venom, he punches Cap hard in the face. Cap explains that he did it to keep Flash's secret identity a secret. He then explains how Agent Venom has joined the Guardians of the Galaxy and is currently in space ( Just more marketing for the Guardians of the Galaxy movie to be released).

Spidey pauses for a moment, thinking how so much has changed since he was gone. Cap tries to relate as he too was frozen for a grand number of years. As a parting word of advice, Cap tells Spider-Man to take those pants off, to which Spidey wastes no time trying to do. 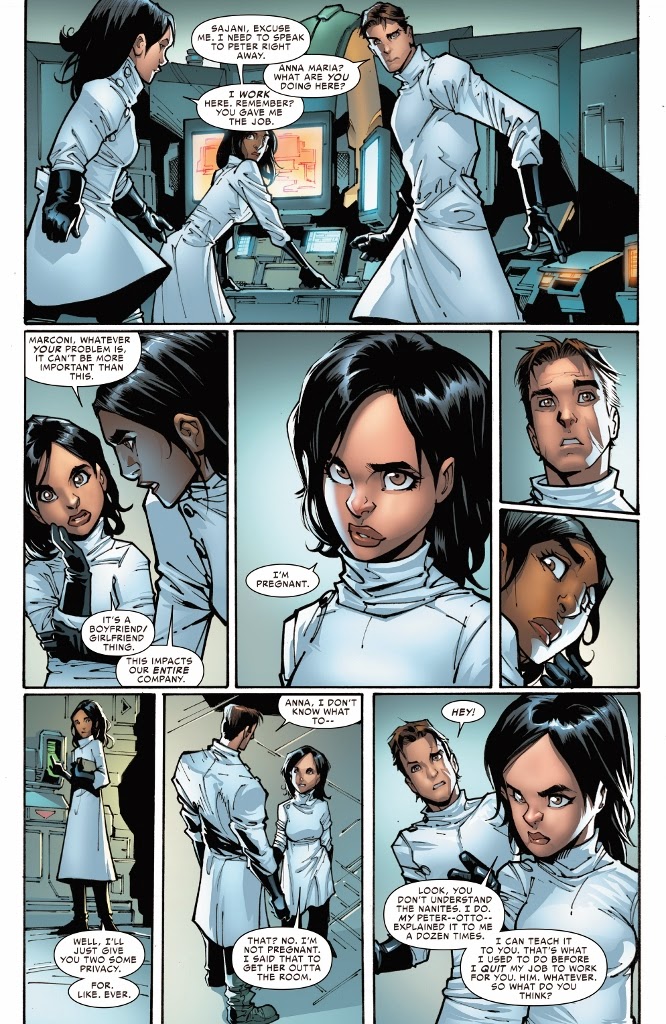 Peter goes to his lab - Parker Industries, to try to look for a web fluid dis-solvent. He is spotted
however by Sajani, who needs Peter to fix their biggest project, something Peter has absolutely no idea how to do. Just then, Ana Maria comes into the lab, asking to speak alone with Peter. Sajani disagrees at first as they have important things to do, but soon agrees when Ana Maria tells Sajani she is pregnant.

Peter is dumbfounded at first but Ana soon explains that she is not pregnant and only said that to get Sajani out of the room. Ana Maria explains that she knows how to fix the problem as Otto had explained it to her many times before. Obviously, Peter agrees to let her keep her job and continue to stay at his place since she had quit her old job and moved out of her apartment to stay and work with Otto. Ana also tells Peter where the web dis-solvent is.

Just then, the electricity in the city goes out and a giant electric bolt shoots to the sky. Peter changes to Spider-Man to check it out and finds Electro there, as expected. Electro is obviously furious at Spider-Man for previously experimenting on him, thus causing his lack of control over his power, which in turn made him kill his friend/ girlfriend.

Spidey is shocked to learn that Otto had experimented on Electro and tries to make amends, but Electro is not interested. With no choice left, Spidey tries his classic "spray Electro with water move", but seems to have unfortunate luck as the water does not come bursting out of the fire hydrant. It only comes bursting out when Spidey puts his face right on top of the hydrant to check it out. Some of a water gets on Electro, which sends him flying away, realizing that he got lucky. Just in the crowd however, we see Felicia Hardy among the crowd, explaining Spider-Man's bad luck. 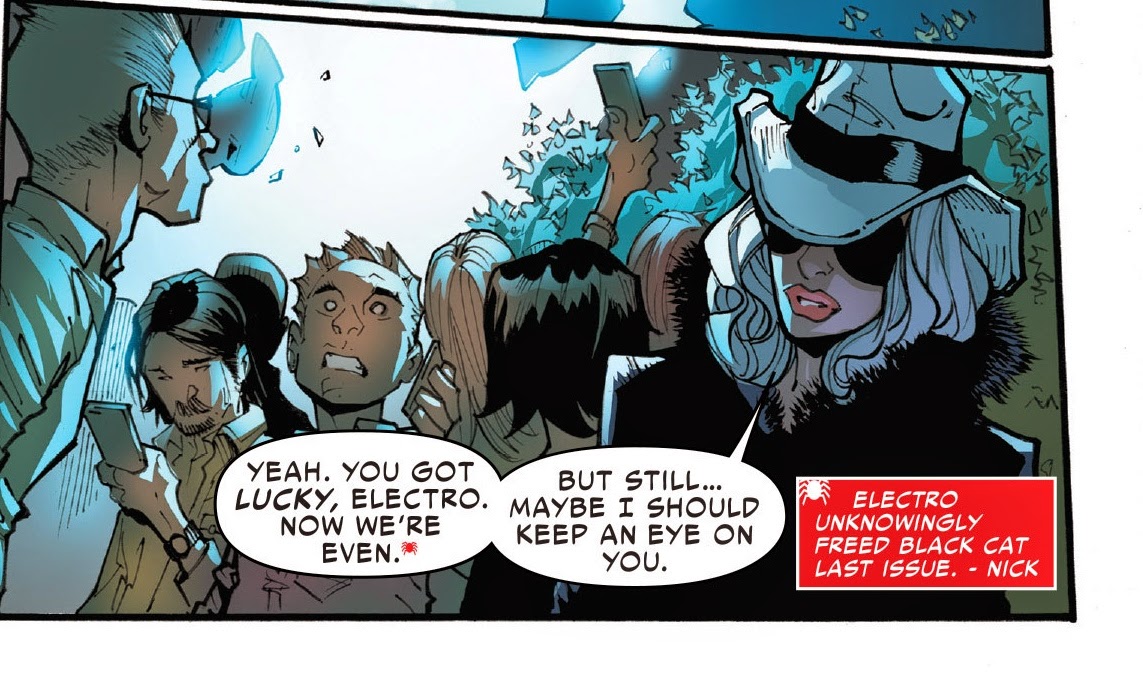 Spider-Man later gets a message form the Human Torch, asking to meet up. The two meet up, and Johnny explains how he lost his powers. He mostly wanted to check up on Peter though, having heard about his mind swap experience. Like Captain America, Johnny tries to relate with Peter, sharing his experience of returning from 'death.'

In the final scene, Peter announces to his company that their next project will be to find a way to fix Electro's condition and build a new super villain prison.

This issue was okay, once again slowly solving Peter's problems that Otto had helped create. The situation with Ana Maria played out exactly as predicted with Peter having Ana Maria as his assistant to run Parker Industries, and help cover for him with her knowledge of his secret identity as Spider-Man.

As for Electro, the writer has the readers feeling sorry for poor Electro, just as in the movie. His new appearance and sob story will be one that will gain more Electro fans. It's funny how almost all Spider-Man bad guys are actually decent characters who go bad for fairly legitimate reasons (except for the goblin of course)

I liked how the build up for the stand off between Spider-Man and the Black Cat is playing out. So far, Peter has been having most of his explanation for his actions to his friends going quite well.
His situation with the Black Cat however may not go so smoothly.

The comical scenes with good old Peter Parker, having bad luck problems like having his pants stuck on was great and refreshing.

Probably most interesting of all was the beginning scene, showing the girl who was bitten by the same radioactive spider that bit Peter. Why she has so much food stored up, and why she has such old equipment in her house is a true mystery. There is so much we do not know about the character, how she shoots her webs and how she knows Peter's identity. Overall, this issue certainly makes the reader want to continue reading Spider-Man and find out what happens next. 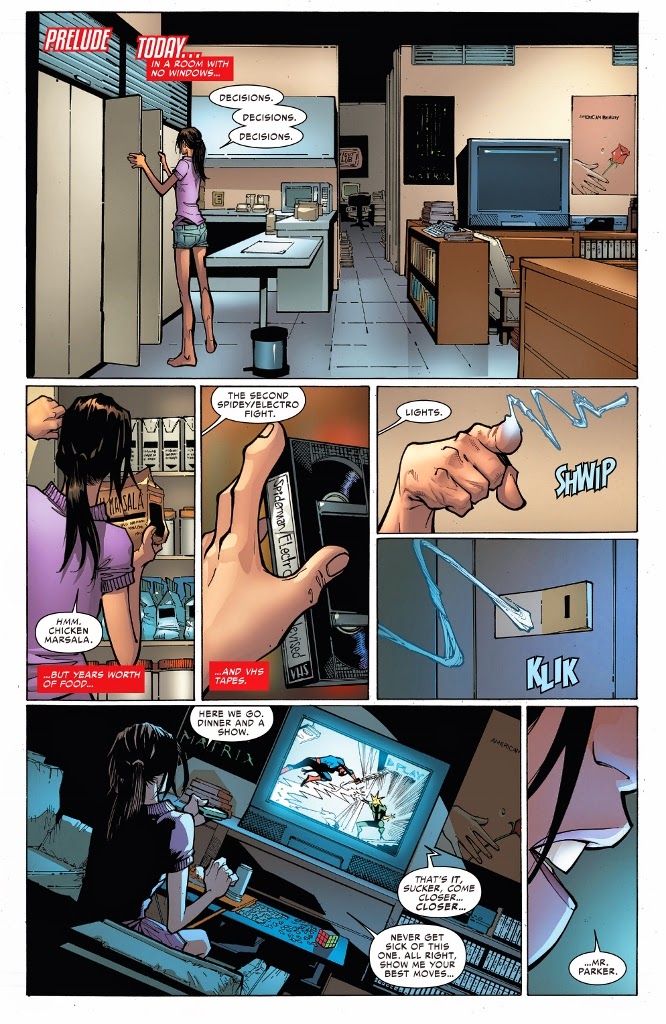