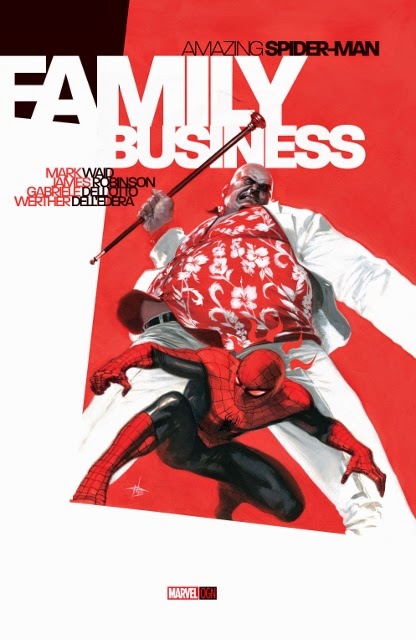 I completely blame the Amazing Spider-Man 2 movie for this story. Once again, we have a major status quo change in this issue. Like in the 90's, this issue explores more about the secret life of Richard and Mary Parker's life as CIA agents. A new character is also involved here - Peter's sister, or is she?

It all begins in Tunisia, when the Kingpin, some months after he left New York. He somehow ended up in a prison but escaped thanks to his careful observations of habit and manipulative abilities.

He approaches Mr Frumm aka Mentallo, a psychic who has been going mad in holding, all set up and planned by the Kingpin. Fisk had arranged for Mr Frumm to suffer to badly so that he would do anything to get out.

In present day, Peter is busy about doing nothing spectacular when his spider sense goes off. He notices a truck carrying loads of stolen detergent, a really petty crime. He bags the crooks up quickly and changes back to Peter when he is attacked by a group of military men who want to take him in a helicopter.

To cut it short, Peter escapes with ease but is rescued by a woman claiming to be his sister! For a moment, Peter goes through all the illusion based/ shape shifter enemies he can think of, but decides that the woman is not a villains since his spider sense is not going off. 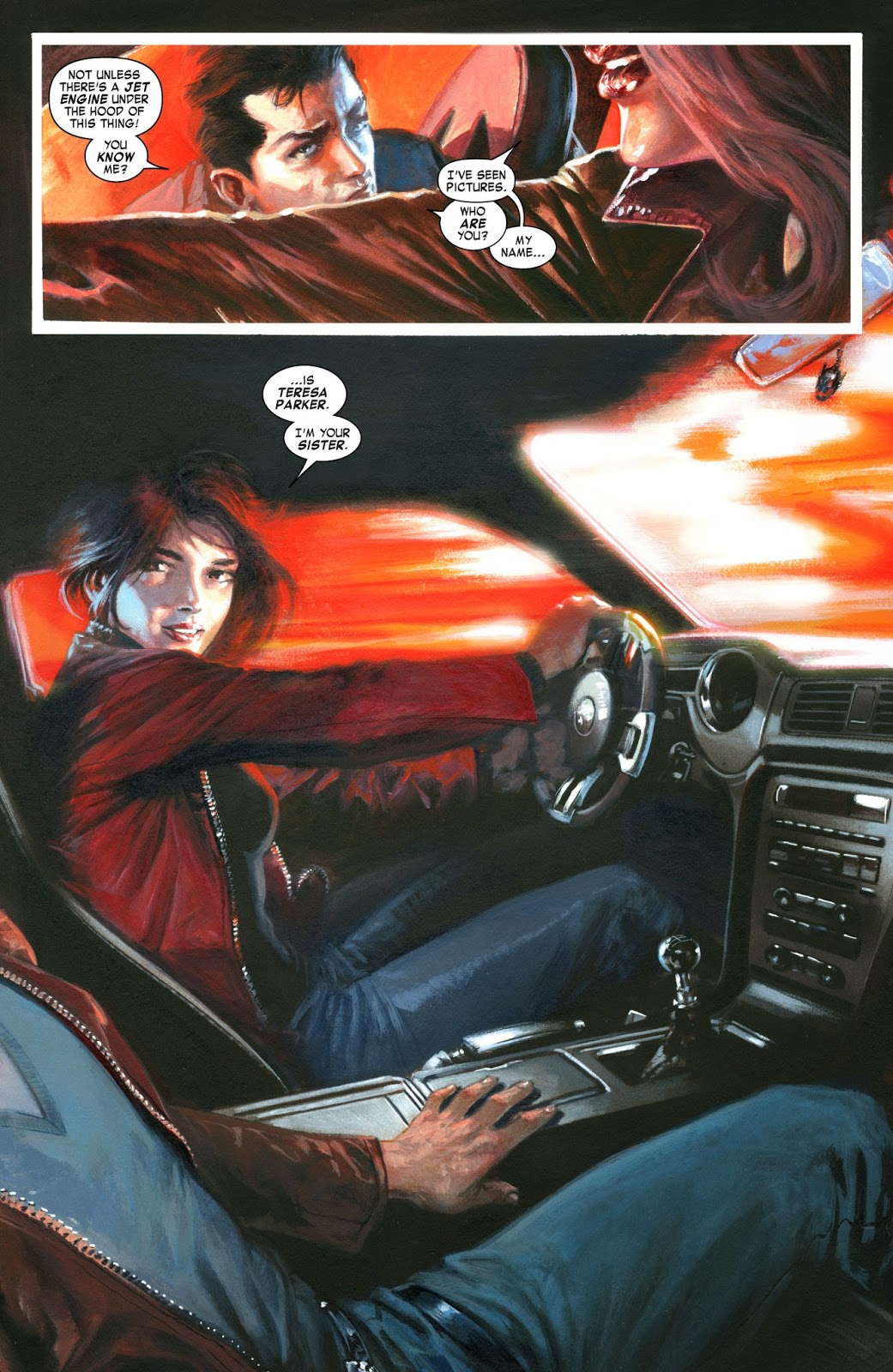 The woman introduces herself as Teresa Parker and explains to Peter that she is CIA and is here to save Peter from dangerous men who want him for something their parents were working on. She explains that she was adopted knew her birth parents only by an old picture that she shows Peter. The picture has Peter's parents in it with a baby. 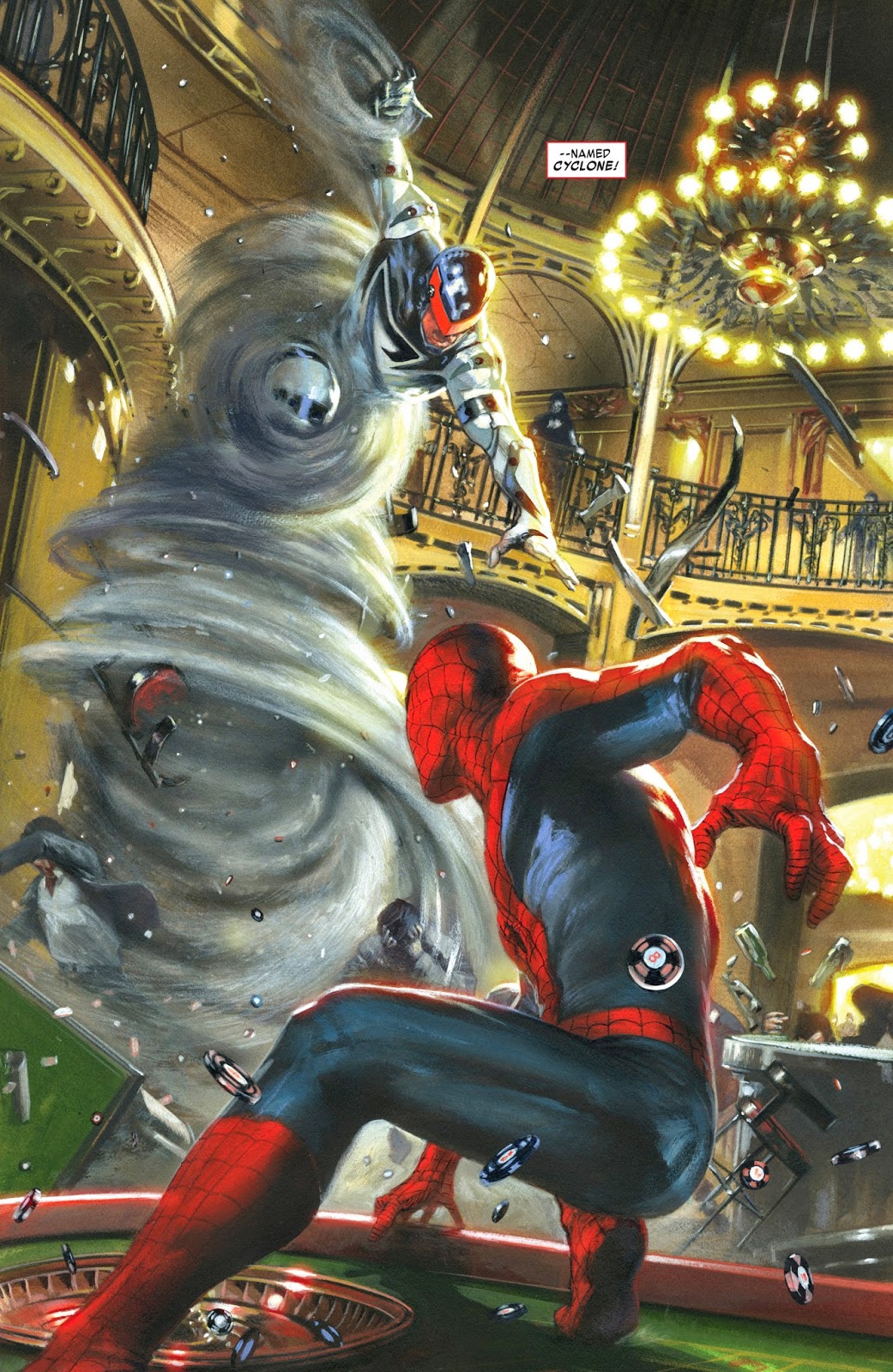 The two of them soon fly out of the country to Monaco on a fake passport Teresa made. There Teresa hopes to find someone who can help give them some answers. It doesn't take long however before the men who were previously chasing them catch up, this time with Cyclone - a super powered villain. Peter changes to Spider-Man and takes care of things, but not before being spotted by Teresa, who finds it strange that Spider-Man is all the way in Monaco.

The two eventually escape and head to their 'contact' - Emile Chigaru. Emile explains how he knew the Parkers and that they helped save the world several times. In one instance, they saved the world by burying Nazi Gold, guarded by a 'sleeper' - a kind of robot similar to sentinels.

Richard Parker had sealed the sleeper so it could not awake and hurt anyone by placing a DNA lock that required only his DNA to open, thus the reason why the bad guys want to capture Peter (because he looks like Richard and has the same DNA) Teresa then asks if Emile knew anything about why she was given up for adoption. Emile explains that until recently did he was not aware of her existence, but tells them to check their parent's safehouse. After the siblings leave, Emile takes Teresa's coffee cup and places it in a bag.

Elsewhere, the Kingpin is alerted that the Parkers are on the move again. Kingpin signals to Mr Frumm, that his job is not done yet and he's still got a job to do.

In the safe house,  the two stumble upon some old tech that thinks Peter is his father. It shows them the location of the buried sleeper- Cairo. Just then, the safe house is shot at by a RPG of some sort fired from a helicopter. The two fall into a ditch and Peter is forced to use his powers as Spider-Man to save them, revealing his secret identity.

With that, the two head to Cairo on a private plane, where Teresa has a contact prepare a new black Spider-Man costume for him. The two eventually locate the site where the gold is supposed to be. They are met however by the Kingpin and an army of men.

Kingpin is thrilled to find out that Peter and Spider-Man are the same person. He also explains that Mr Frumm used his psychic abilities to block his spider sense, and alter both his and Teresa's vision. For the first time, the two of them have their eyes unveiled and they see that they are surrounded by thugs. Teresa's appearance also changes and the picture of Peter's parents giving Teresa up for adoption is also no longer to be found. 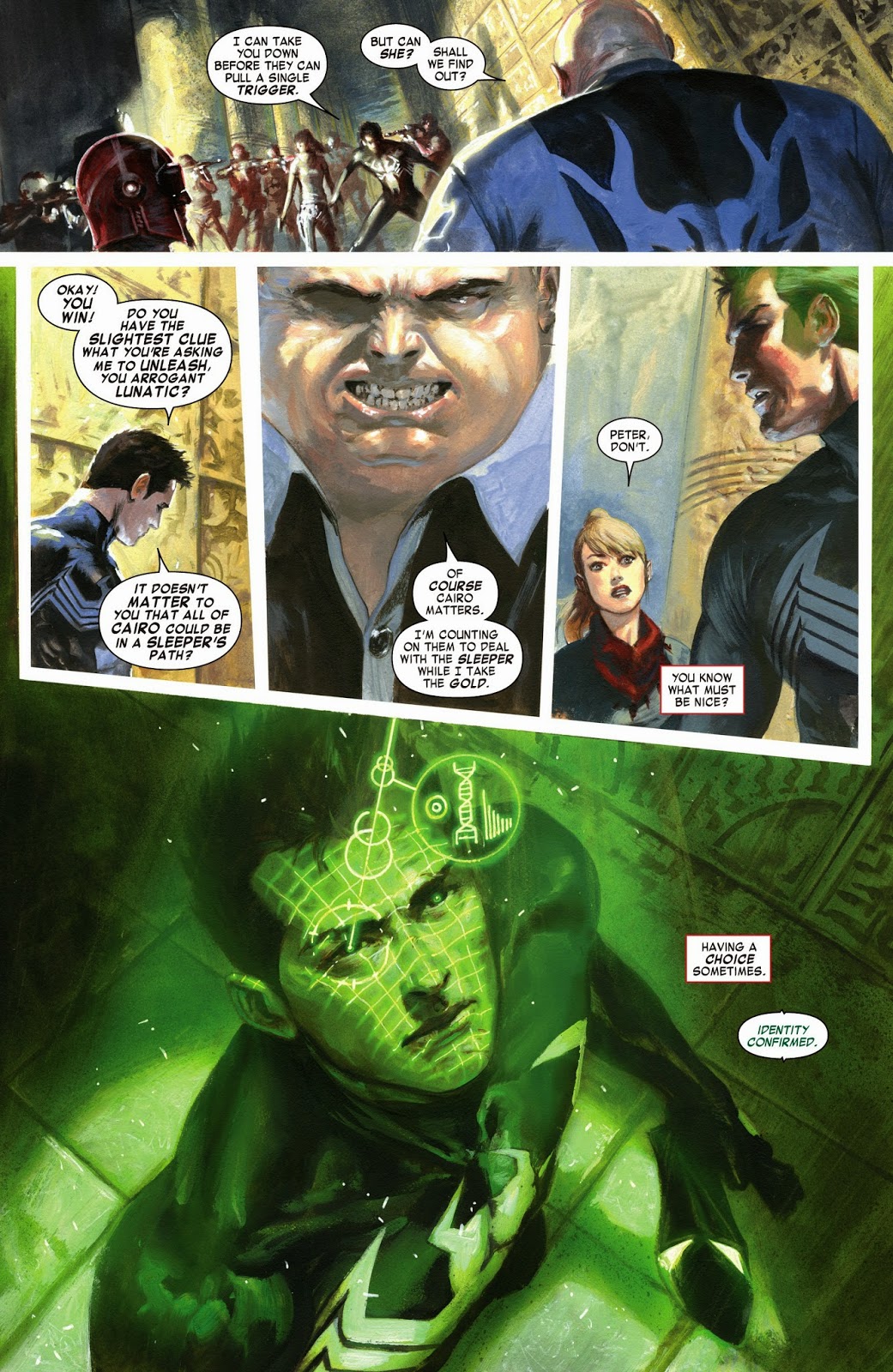 As it turns out, Teresa is not really Peter's sister, but was herself fooled by Mr Frumm's psychic abilities, and got Peter to believe her as well. Peter is then forced to unleash the Sleeper and reveal the gold, as Kingpin threatens to kill Teresa if he fails to do so.

The doors open and the Sleeper, and the gold is revealed. Spider-Man goes to take care of the Sleeper while Teresa escapes and fights as many bad guys as she can. Teresa soon figures out that some of the mercenaries she is fighting are not real. She then proceeds to knock Mr Frumm out, to stop his interference with her mind.

Naturally, Spider-Man beats the Sleeper and Teresa also gets rid of the mercs. Teresa has the  Kingpin at gunpoint when Spider-Man tries to stop her. Kingpin then takes advantage of the situation and tries to kill Teresa. It is at this point that Mentallo decides to turn against the Kingpin!

He mind wipes both the Kingpin and Teresa, so that they no longer remember the events that have taken place. Both are knocked out and neither remember that Peter is Spider-Man. Mentallo on the other hand also passes out in shock after performing the task.


In the epilogue, we see in a flashback that the Parker's were at some point, after they had left Peter with Aunt May, expecting an unplanned second child after all. We also see Emile, performing a DNA test on Teresa's cup that he had previously kept. He finds the DNA results to be quite amusing.

I find it very convenient that a status quo changing issue involving Peter's family takes place somewhere around the release of the Amazing Spider-Man 2 movie. Peter's parent's lives as CIA agents has not been explored in years. Though somewhat controversial at the time, bringing the Parker's back probably seemed like a good idea considering that they received a fair amount of screen time in the movie.

This whole issue is really a tease, with absolutely nothing that took place in this issue remembered by anyone that mattered. Two people (more including Mr Frumm and the mercenaries) learned Spider-Man's identity in this issue.

My first thoughts when Kingpin learned Peter's identity was that this was going to be another 'Back in Black' repeat. I'm somewhat glad that the Kingpin lost all memory of what had happened in this issue by the end of it.

It would however have been nice to have Teresa as a recurring character. Teresa preparing a black Spider-Man suit was completely uncalled for, yet rather fitting considering he would eventually stand off against the Kingpin.

With Amazing Spider-Man # 1 relaunched, we have all kinds of new additions to Peter Parker's history. Here's hoping for the best for the new stories to come...