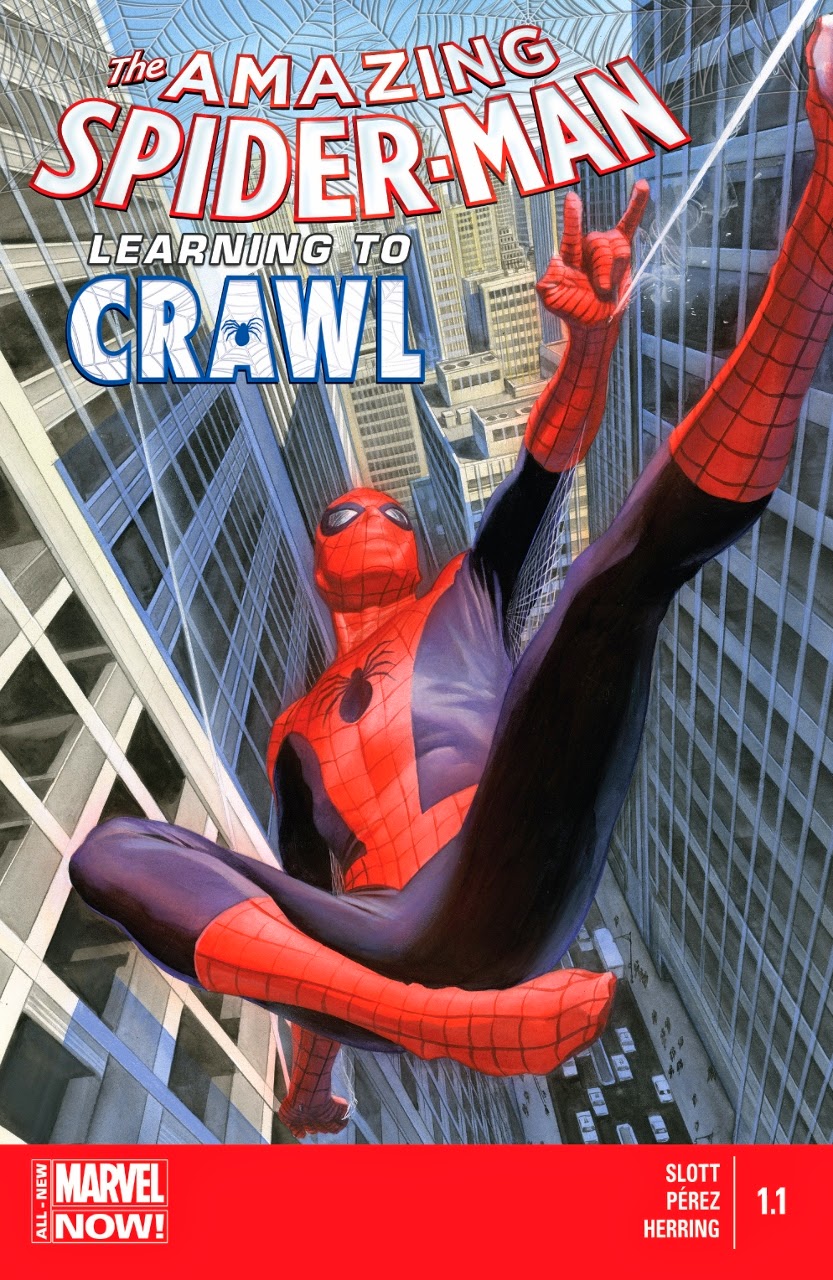 Learning to crawl
Part one: The show must go on

This is the story that was teased in the Amazing Spider-Man # 1 story, Learning to Crawl: Amazing reality.

In this story, uncle Ben has already died, and Peter feels guilty for fooling around like a celebrity instead of stopping the crook. Peter makes a promise to take care of Aunt May for uncle Ben.

In order to pay for the home mortgage, funeral bills and other costs, Peter continues to do ridiculous shows as Spider-Man for extra cash.

In order to keep doing the shows, Peter has also been skipping classes, which does not go unnoticed by the principal. For most of the time, Peter is preoccupied with thinking about getting money for the family. 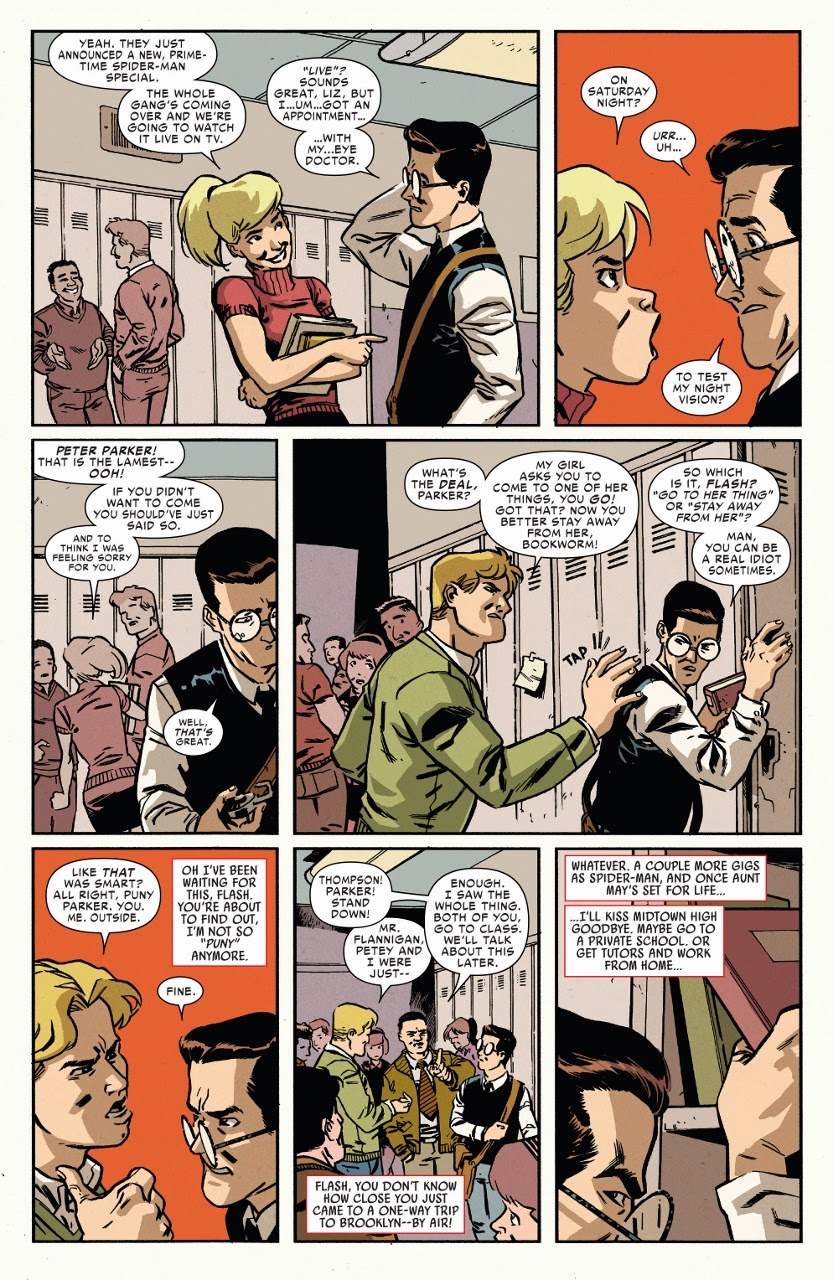 When asked by Liz Allan to come over to her place to join the gang watch Spider-Man on television, Peter gives the poor excuse of having a eye doctor appointment for his night vision at night. Flash, as usual, is also giving Peter a hard time, but after the death of his uncle, Peter is willing to give him a beatdown he deserves. Fortunately for Flash though, the fight is stopped before it can begin by one of the teachers.

We also see the beginnings of Jameson hating Spider-Man, thinking he is a clown, getting unnecessary attention for money. At this point in time, Jameson is absolutely right.

At the show, Spider-Man tells the crowd how his web shooters are not one of his abilities, but are instead an invention of his. This really gets Clayton's attention, who had already known by now that Spider-Man was just a kid like himself from the last story. Clayton goes home to invent his own web shooters. 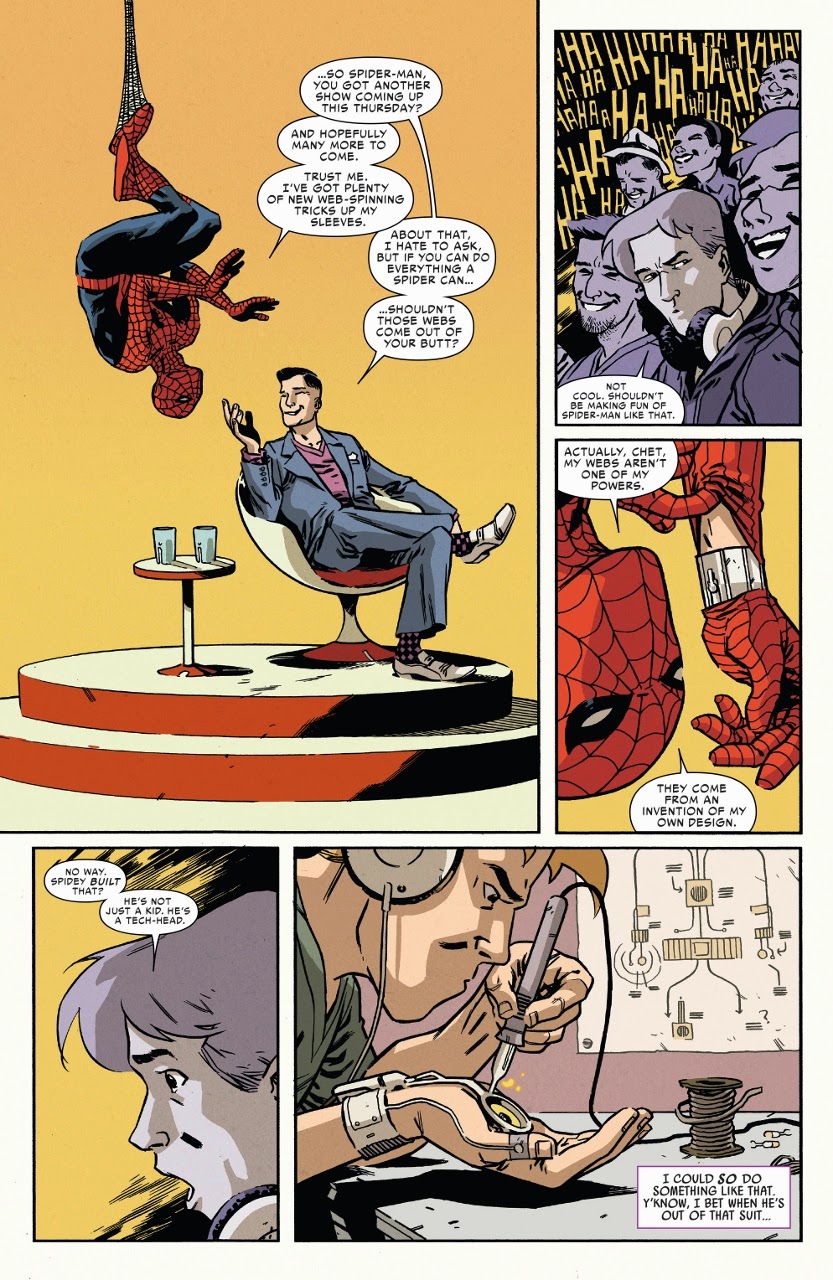 That night, while Peter was out performing as Spider-Man, Aunt May gets a call from Peter's principal, informing her that Peter has been skipping classes. The next day, at Uncle Ben's funeral, all of Ben's friends and family are there, all praising Ben, telling Peter what a good, kind and generous man Ben was.

After the funeral, Aunt May personally walk Peter all the way to school, making sure he gets there to have a chat with the principal. Peter however does not want to be there as he has a big show that morning.

Over on the other side of town, Spider-Man's agent is preparing a huge show with real buzz saws shooting out at him to impress the fans. Thanks to the delay with the principal however, Spider-Man is late and has no rehearsal. He is shocked with buzz saws start shooting at him. Instinctively, he deflects the buzz saws sending it flying, endangering the audience. Fortunately, Spider-Man makes sure everyone is safe.

The owner of the studio however is not impressed and refuses to pay. Meanwhile, Jameson is busy writing an article to publicly ridicule and humiliate Spider-Man for his dangerous actions and how they might influence other youngsters.

Jameson is actually spot on in his prediction as Clayton, has finished his costume and is ready to make an appearance as Clash! 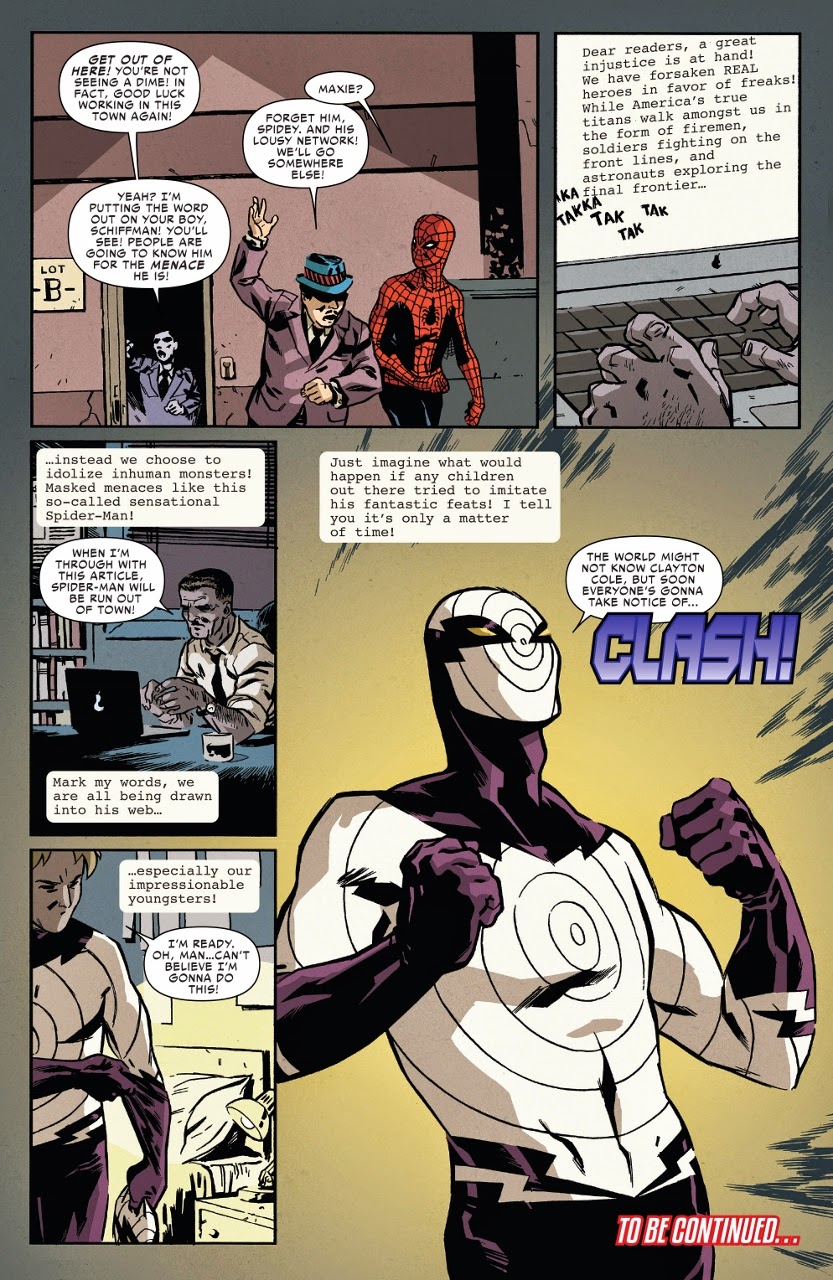 This whole issue was not too bad. We have a new story that was not told before taking place early in Spider-Man's career before he was the friendly neighborhood Spider-Man. This was a difficult time for Peter and as a young lad, he was not aware that his actions would influence those around him.

In this issue, we can also see legitimate reasons for the start of Jameson's hate for Spider-Man. Having a new story back dating all the way is both interesting and dangerous as a slightly contradictory story could cause uproar among comic fans online around the world.

With the beginning the Amazing Spider-Man # 1, we find, in this issue, in Family Business and I'm sure many others to come, that Spider-Man's story is going to be told in ways that we have not been told before.

Essentially, all readers should probably brace for a major status quo in Spider-Man comics. So far, we already have a new person who was bitten by the spider, a new Spider-Man inspired character we had never heard about before and a possible sibling of Peter Parker's that we did not know about. - see Spider-Man: Family Business. All this and we are only at Amazing Spider-Man 1.1!

Overall, this issue was a decent flashback/classic styled comic. We'll see how the rest of the story goes.