The Top 10 Things We Learned From the Superior Spider-Man series: Number 3 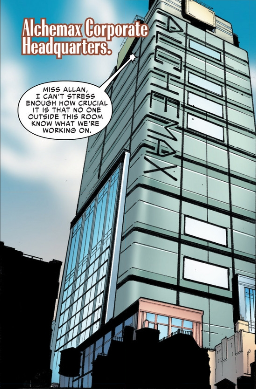 If you're wondering what ever happened to our list of Things we learned from the Superior Spider-Man series, we'd like to apologize for the slight delay in releasing number three again! Anyway, on to it then...

Number 3: The Origin of Alchemax
Over the years there have been many alternate versions of our friendly neighbourhood web-slinger that have graced the pages of Marvel Comics, and there will be many more in the years to come (especially with Dan Slott & Olivier Coipel's Spider-Verse on the way). Of all these parallel wall-crawlers however, there is perhaps none more liked or enduring than the Spider-Man of 2099, Miguel O'Hara. It's indicative of the character's popularity that, despite the entire 2099 brand being cancelled in 1996, he remained a cult favourite, continuing to make sporadic appearances over the following decade, from the one-shot send-off to his own universe Manifest Destiny, to the Timestorm 2009-2099 crossover, even the recent video games Spider-Man: Shattered Dimensions & Spider-Man: Edge of Time. So when Miguel was revealed to be returning for the "Necessary Evil" story-arc in issues 17-19 of Superior Spider-Man, it's safe to say that many of us were super excited at such a prospect (even if it meant that Miguel would be teaming up with Otto Octavius rather than Peter Parker.).


Naturally there was a great deal of speculation over just how and why Miguel would cross paths with Otto, but if one thing was certain, it was that Alchemax would somehow be involved. The megacorp has such an intrinsic link with O'Hara and his origin as Spidey, that it would have been a surprise if it weren't included in the story in some way. While this was an accurate prediction, I don't think we necessarily expected Dan Slott to not only make the 2099 timeline canon again (It was previously implied to have become an alternate universe in the aftermath of Spider-Man 2099 Meets Spider-Man.), but also show us the very inception of the corporation that would cause all sorts of trouble for Spidey's future counterpart, as well as set up a brand new status quo and series (written by Peter David himself) for him. 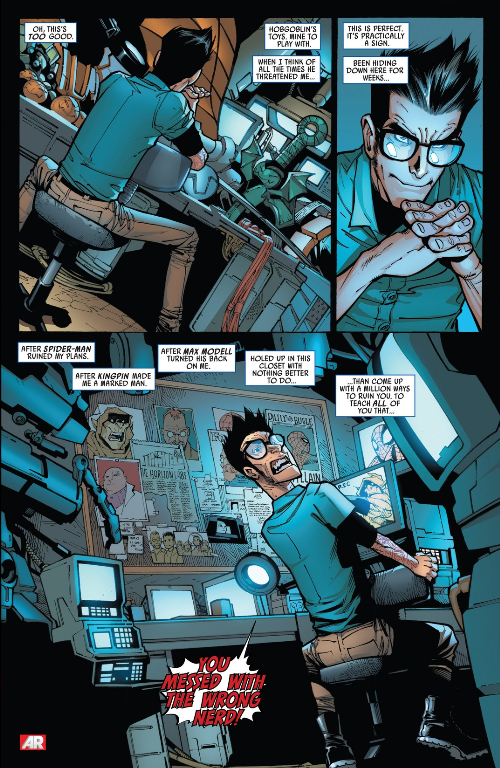 Indeed, this was a story Slott had planned to tell for some time when he re-introduced the character of Tiberius Stone at the start of his "Big Time" run, using the scheming employee of both Horizon Labs & the Kingpin to link the two times together by making him the father of future-Alchemax CEO Tyler Stone, and therefore the grandfather of Miguel. It's also interesting to note that Stone was originally introduced as the childhood friend of Tony Stark (you know who he is), which would definitely be worth exploring in the future (not 2099-future, just the immediate future). Thanks to the Amazing Spider-Man, Stone was eventually outed as working for Wilson Fisk and was swiftly fired by the head of Horizon Max Modell. He was also marked for death by the Kingpin, with a bloodthirsty Hobgoblin imposter all too happy to carry out the order, which forced Stone to hide out at the Tinkerer's. There he planned to ruin them all, declaring that they'd "MESSED WITH THE WRONG NERD" (ugh).

And once the Superior Spider-Man's invasion forced Fisk to fake his death and leave New York, Stone set his plans in motion, first by secretly aiding Otto in exposing and temporally capturing the Hobgoblin. Once that was done, he set his sights on Horizon, allying himself with none other than Peter's high school classmate Liz Allan, the CEO of Allan Chemical, often shortened to Al Chem, which provided the genesis for the name Alchemax. The two combined their funds to buy the majority of Horizon's shares, claiming all their intellectual properties and merging them with Allan Chemical and Normie Osborn's (Liz's son) holdings in Oscorp, re-branding it's main building as Alchemax headquarters. It was certainly a lot easier to obtain the Horizon properties when SpOck failed to prevent the building from imploding, though not before Spider-Man 2099 showed up from the future to prevent his grandfather's demise so he himself wouldn't be erased from existence. Realising that he had a chance to change history for the better, Miguel, with the help of his holographic aid Lyla, secured a position at Alchemax as Ty Stone's assistant, under the name Michael O'Mara. (See Superior Spider-Man # 19) 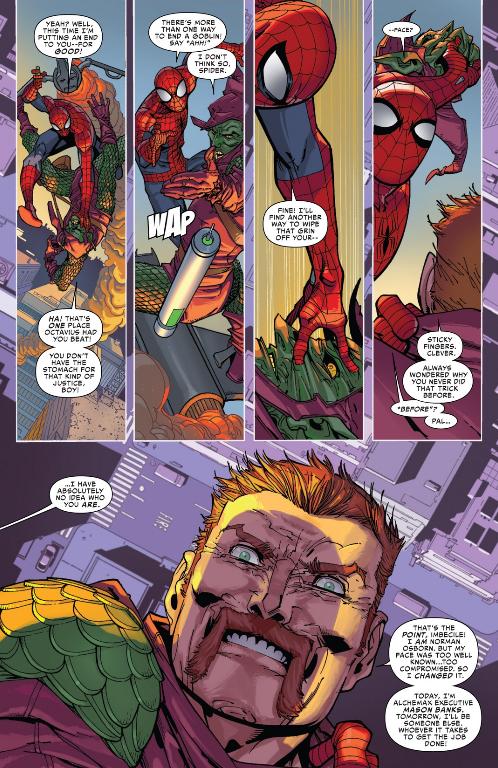 But the surprises didn't end there. Months later, the Green Goblin, having gathered an army underground, enacted an invasion of New York. Finding himself alone and no match for the Goblin's forces, Otto Octavius deleted his memories and thus, his life, allowing Peter Parker to resume control of his body. The newly-returned Amazing Spider-Man then fought the Goblin on the roof of the Alchemax building and unmasked him, revealing that, while it was indeed Norman Osborn behind the face of the Goblin King, he had changed his own to that of Allan's lawyer, Mason Banks, as his previous look was too compromised (yeah right! In his twisted mind, it was probably just an excuse to get rid of that hairdo). He also revealed that he was the driving force behind Alchemax, desiring to build a sustainable legacy for his "special" grandson. Osborn was later able to escape thanks to Liz, but not before Spidey cured him of the Goblin Serum using Otto's Spider-Bots, vowing that he would return with a new face. (See Superior Spider-Man # 31)

What was great about this reveal is that by making Osborn an integral part of Alchemax's formation, Slott and Marvel have now tied the mega-corp to Peter Parker as well as Miguel O'Hara, further unifying the two time periods and adding more depth to Miguel's new mission to change the mega-corp and his grandfather for the better. This also gives more negative consequences to Otto's actions as the Superior Spider-Man. If Otto hadn't blindly marched into Shadowland and forced the Kingpin out, the Goblin wouldn't have been able to take over the majority of the cities crime. There's certainly a lot that can be done with Alchemax in the modern day Marvel Universe, and though we've not always seen eye to eye, I respect Dan Slott for having the "unmitigated gall" to re-introduce the world of 2099 to a new generation of Spider-Man fans... 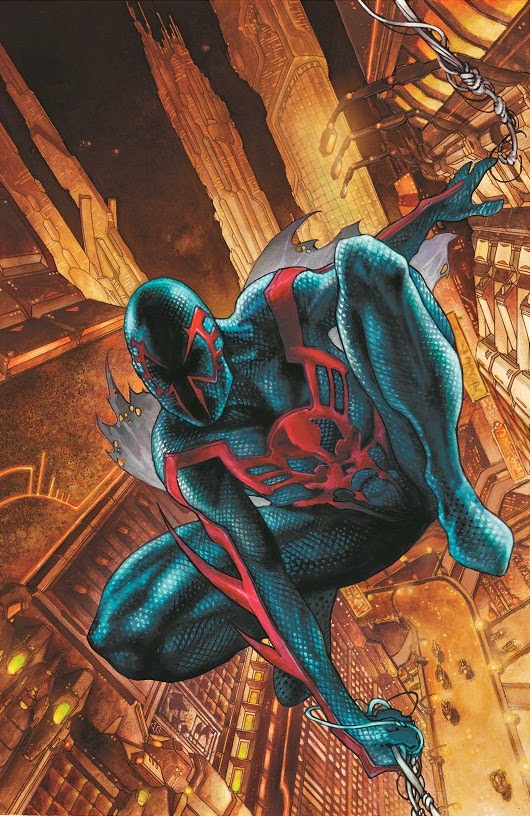