The Top 10 Things We Learned From the Superior Spider-Man series: Number 4 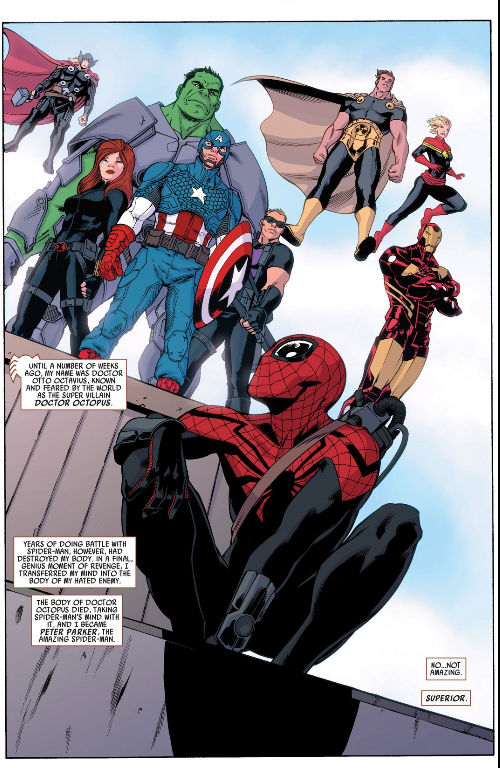 After skipping a day or two, we're back to out List of things we learned from the Superior Spider-Man series, featuring number four on the list!
Number 4: SpOck is the 'master of disguise'
Yeah, you can probably tell I'm being sarcastic with that last bit. As Mike pointed out in the previous entry on this list, Otto's lack of effort in impersonating Peter Parker was one of the most frustrating aspects of Superior Spider-Man by fans and critics. While he wouldn't hesitate in cracking wise to get under the skin of his opponents and Wolverine, Peter was very often a modest and polite individual to his family and friends (barring the occasional emotional outburst), often feeling inferior when in the presence of heroes such as Captain America, Iron Man or Mr. Fantastic. Otto on the other hand, would often go out of his way to be rude, spiteful, condescending and generally quite unpleasant to most around him. In his hands, Peter Parker took on the personality of a crackpot, egoistic mad scientist, totally assured that he was always the smartest person in the room, which earned him plenty of ire from his co-workers at Horizon Labs, as well as his Empire State University science teacher Don "The Shnoz" Lamaze.

Otto was also prone to some rather sleazy behaviour around women, such as his ogling of Mary Jane's cleavage during their first date and flirting with teenage students at ESU, despite Peter's quip that he's "too old for their mothers". He could also be quite cold and ruthless towards the fairer sex as well. Whereas Peter might have been a bit more civil towards the Black Cat, Ock didn't hesitate in punching her in the jaw (which lost Felicia a tooth) when he caught her in the act of a burglary. He also treated Mary Jane with disdain, often referring to her as "woman" and cutting her out of his social circle the second he'd "got what he wanted" (though thankfully it was just sifting through Peter's memories and relieving all the times he and MJ were "intimate"). Aunt May & Anna Maria were the clear exceptions to this treatment, until May inadvertently made some offensive remarks over Anna that caused Otto to explode in anger at her (To be fair he was being influenced by the Venom symbiote at the time). 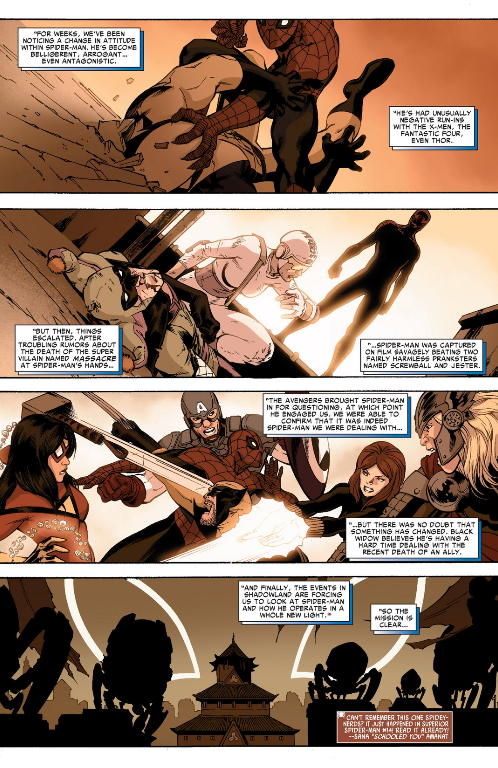 Of course, this didn't just stop when it came to Peter's life. Otto also had no qualms in twisting the image of Spider-Man to represent his own warped sense of responsibility. This guy took the friendly out of the neighbourhood! While the Amazing Spider-Man had made a pledge to let "no-one die", the Superior Spider-Man took no issue with offing Massacre & Alistair Smythe (As Jesse previously stated in entry No. 8). Boomerang would have been included in that group too if it weren't for the intervention of Ghost Peter (which means we very nearly missed out on The Superior Foes of Spider-Man). It was after the death of Smythe when Otto really started to go about things differently, adopting a new costume (complete with four metal arms that were suspiciously similar to those of his previous identity), hiring Spider-Ling's and building a fortress over the remains of the prison island The Raft, which he dubbed "Spider-Island II". The ego remained too, to the point where Otto would even publicly big-up Doctor Octopus as Spider-Man's greatest foe and violently attack anyone who insulted his former name (though Deadpool managed to get away with saying that Doc Ock "looked like a one-man, fat guy cirque du souffle.") 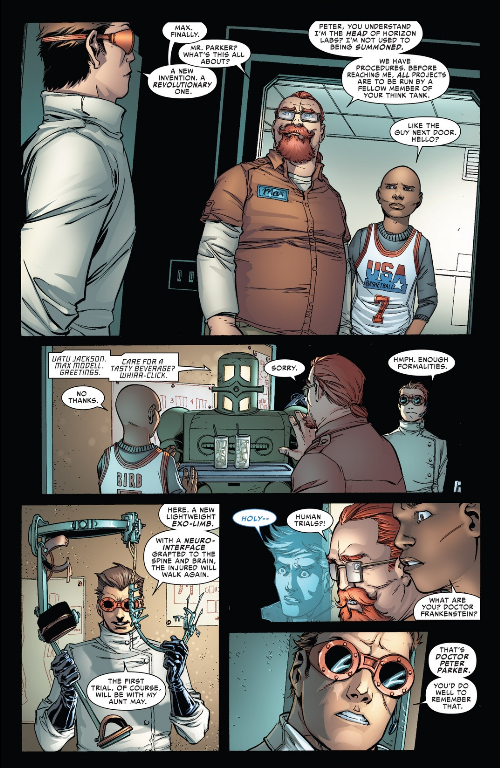 Now from an outside perspective, this type of behaviour on both fronts would look suspicious to say the least. But while there were a few rumblings amongst the superhero community and Peter's social circle that "Spidey" had well and truly lost his marbles, many of them just seemed to accept the change. Peter's co-workers at Horizon Labs were certainly irritated by his "Otto-isms", but they never seemed to consider that there might be something wrong with him. Even when they had the opportunity to investigate his recent past with Grady Scraps' "Time Door" (and Sajani Jaffrey actually suggested doing something like that) during the "Necessary Evil" story-arc, they chose not to (though I guess they had other priorities, like procuring evidence of Tiberius Stone's wrongdoings, which they also failed to do.).  The same applied to the Avengers, and while Peter was certainly on friendly terms with the rest of the Horizon staff, he's arguably had closer bonds with the likes Wolverine, Captain America and even Captain Marvel (who kind of admitted to having feelings for him), not to mention that Spider-Man has served as a figure of inspiration to fledgling heroes such as Gravity and White Tiger, but overall, the response to Spider-Man's sudden change in personality was pretty underwhelming, which is a shame since it downplays his status as a superhero within the Marvel Universe. 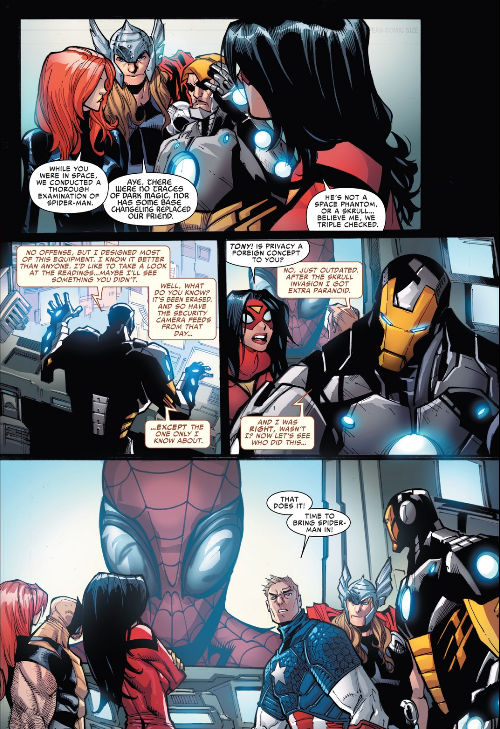 In fairness though, Marvel did approach the debut of the series with some strategy, scheduling events amongst some of Spidey's closest friends among the superhero community that conveniently sent them away before the start of the Superior era, such as the Fantastic Four & Agent Venom, aka Flash Thompson. Captain America has been present for much of Otto's tenure, but he was also subject to a stay in Arnim Zola's Dimension Z, where he underwent a great deal of personal loss that still haunts him, as well as put him off his A-game. Wolverine also recently went undercover for S.H.I.E.L.D to bring down Sabretooth, part of which involved faking his behaviour around his allies, which probably included supporting "Spider-Man's" new outlook on life. Then there's Iron Man (Someone definitely capable of sussing Otto out, due to their shared animosity of one another, if not for his intelligence), who spent much of Ock's reign in space with the Guardians of the Galaxy, and he was quick to question "Spidey's" sincerity when he returned. 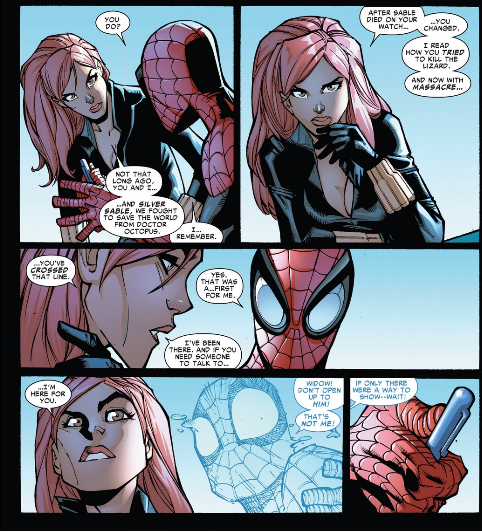 And while Otto's unwillingness to be consistent with his predecessor's behaviour required a suspension of disbelief, it did allow for some interesting developments. Despite having the Mayor of New York, J. Jonah Jameson backing his every move, Otto still decided to blackmail him in order to secure the former Raft prison for his Spider-Island project, which has convinced Jonah more than ever that he was right about Spider-Man being a menace. After a confrontation with SpOck, the Punisher soon saw this Spider-Man's morality and approved of it in his war journal.  Black Widow, often regarded as a no-nonsense, closely guarded assassin, interpreted "Spidey's" darker behaviour as a method of coping with the death of Silver Sable in Ends of the Earth, offering to be there for Otto if he needed her (I'm still surprised he never took her up on that) since she knows what it's like to "have red in your ledger". I imagine she won't be best pleased when it's proven that she opened up to Doctor Octopus. And as for the criminal element, well once again as Jesse mentioned before, SpOck has a zero tolerance policy on crime, as Blackout soon discovered when he decided to kidnap Aunt May. Otto soon tracked him down and tortured him into submission, instructing Blackout to send the word out that Peter Parker is off limits. Well the word certainly spread fast because the very next day, a lowly pickpocket swiftly returned Peter's wallet to Otto after he saw who it belonged to, even begging for his life. One only wonders what the Amazing Spider-Man will think of this now that he has returned.

Now I could throw a number of bizarre theories out there as to how Otto was able to deflect enough suspicion about his true identity (perception filter, employing a telepath to influence people etcetera),  but honestly, it's clear that this was an oversight on the part of the writers as they clearly wanted Otto to be his own Spider-Man, and to allow us as fans to observe both the parallels and differences he shares with Peter. If anything, this approach did teach us yet another thing about the Superior Spider-Man. He's actually quite like Rorschach from Watchmen, "Never compromise, not even in the face of Armageddon". 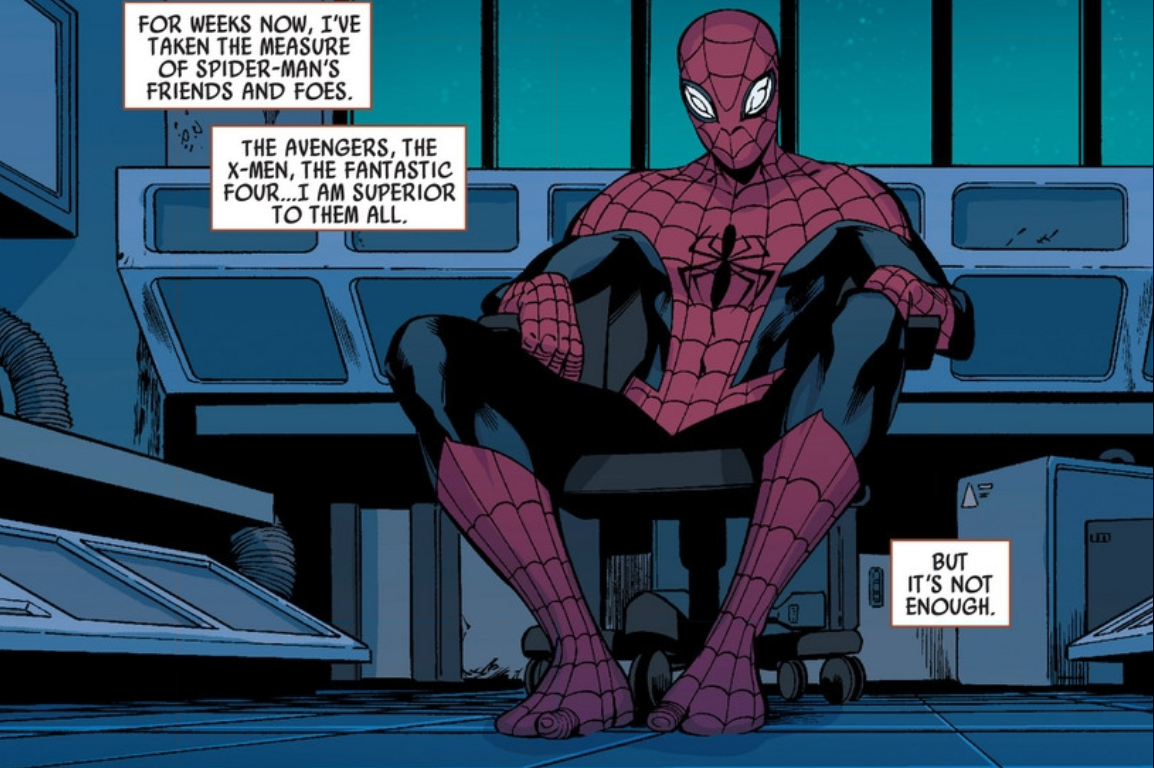