In an attempt to get Doc Ock more motivated however, the Goblin infected Ock's ex fiance with a deadly illness!

This issue begins with Doc Ock recalling some good times he had with his ex fiane - Mary Alice.Upon realizing what the Goblin had done, Ock takes out all his anger on him and begins beating the Goblin relentlessly! However, the more he beat the Goblin, the less he felt anything at all. Ock, had fallen right into the Goblin's trap, making him become heartless. 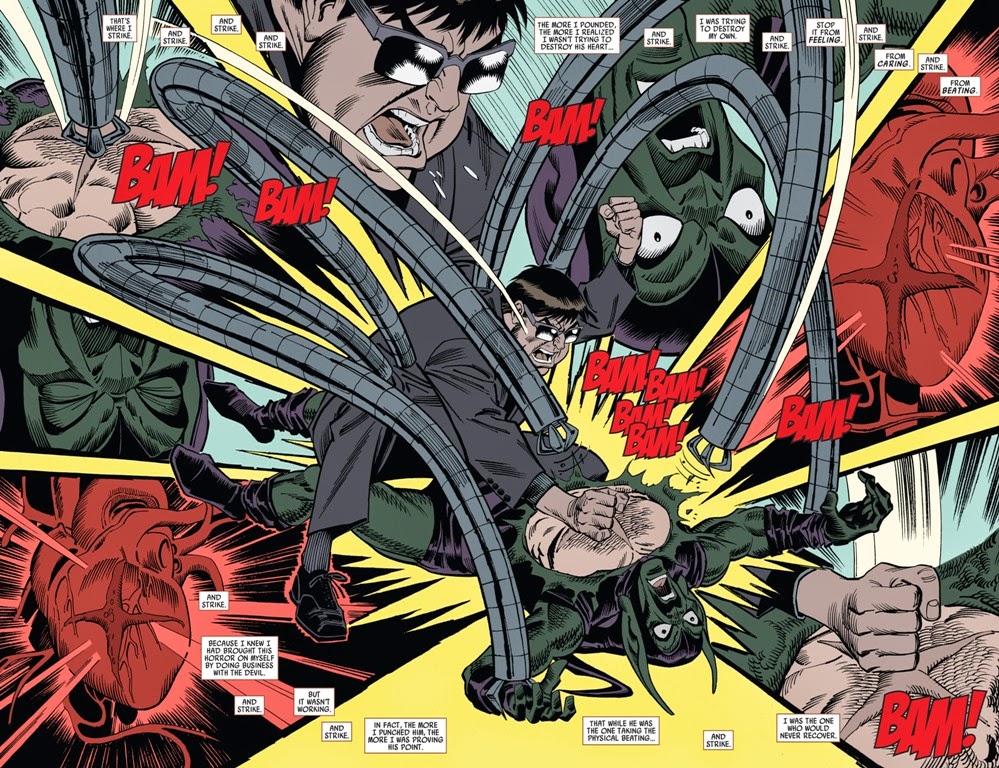 Otto eventually, finally stops beating the Goblin when Mary Alice wakes up, wondering what he was doing in the hospital. Before Ock can give a valid explanation, she passes out! Both Ock and the Goblin were then forced to flea as Spider-Man reached the hospital.

From that moment, Ock devoted his life to find a cure for Mary Alice, but eventually failed when she died. Furious, Ock goes to see Osborn to kill him, but finds that he had boobie trapped his residence, and presumably left ( though we later find out he was just hiding ).

Unable to find Osborn, and realizing that he would not be able to physically kill the Goblin, he leaves a message to Osborn, stating that as part of his revenge toward the Goblin, he swears to kill Spider-Man before the Osborn, to vastly hurt his ego!

As such, Ock now had double a reason to kill Spider-Man. Doc Ock, wore his own physical body out trying to kill Spider-Man out of revenge towards the Goblin for what he had done to Mary Alice. As such, Spider-Man's countless battles between Ock and the Goblin was, not more than a competition between the two. 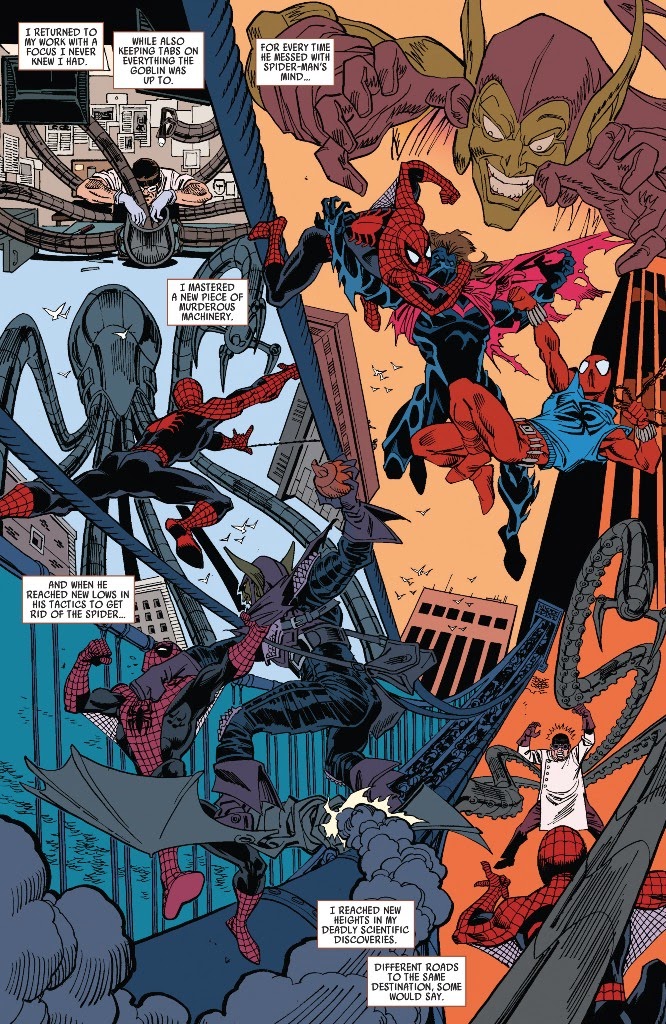 Recalling how he would at any day give his life to save Mary Alice, Ock, as the Superior Spider-Man did not hesitate to trade places with Peter Parker to save Ana Maria's life.

This single story changes the reader's perspective of Doctor Octopus and his actions. As a reader, we now realize that Ock, was not actually a person filled with mindless hate and malice only wanting only to destroy Spider-Man for no good reason. Instead, his reasons for getting at Spider-Man was fueled more by his hate for the Green Goblin, and his determination to insult the Goblin's ego by robbing him of the satisfaction of killing Spider-Man. 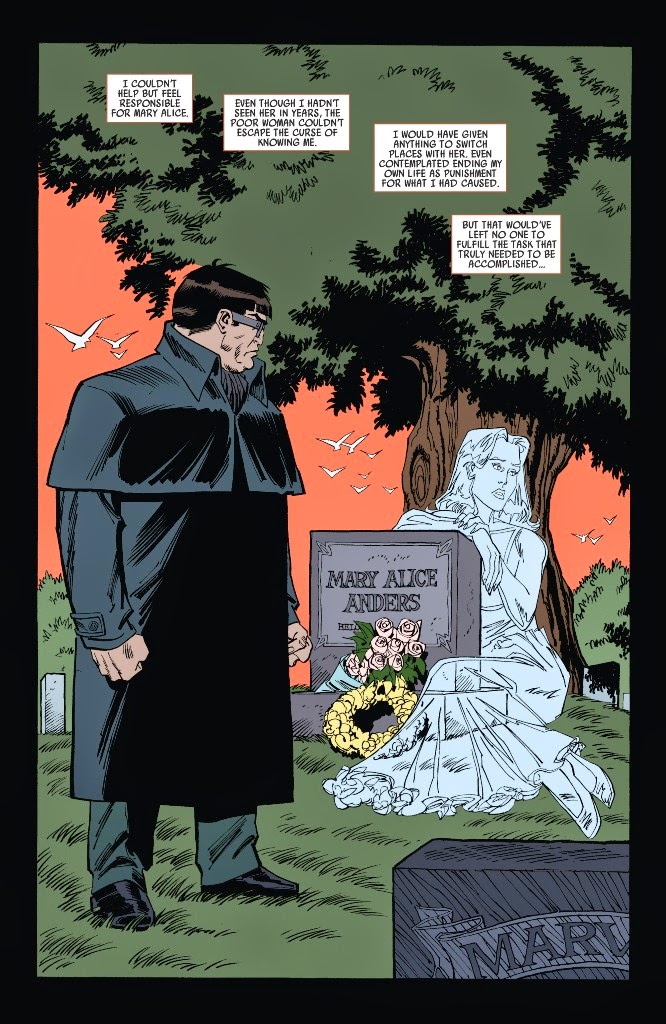 Doc Ock once had happiness with the woman he loved and the Goblin took that away from him ( although he did break up with her on his own).

In this issue, and the last, we learn that Ock had initially wanted to be the greatest scientist in the world, using science to take out Spider-Man! The Goblin on the other hand was the insane villain, with no compassion, whose only goal was to fill Spider-Man's life with hurt and misery, and eventually kill him.

Knowing fully well what the Goblin was capable of, it is no wonder that SpOck decided that it was not worth to risk Ana Maria's life to prove that he was a Superior Spider-Man than Peter. He had already come to terms that he was not Superior when he began losing the battle against the Goblin. Not wanting to lose another loved one at the hands of the Goblin again, Ock quickly gave up the mantle of Spider-Man and gave his new life up for Peter to return to his body and save Ana Maria.

At the end of the day, when it comes to comics, nothing is ever set in stone. There is always a backstory to a character that we didn't know about ( the clones, Gwen's affair and her kids, spy parents, and most recently - a new person who was bitten by the radioactive spider that bit Peter, what?!)

On a side note, we're doing a list of things we learned from the Superior Spider-Man series, and had the list not been put together before this issue was released, this point about Doc Ock's reason for wanting to kill Spider-Man would certainly have made the list!

Ten Things We Learned From The Superior Spider-Man series: Number 5 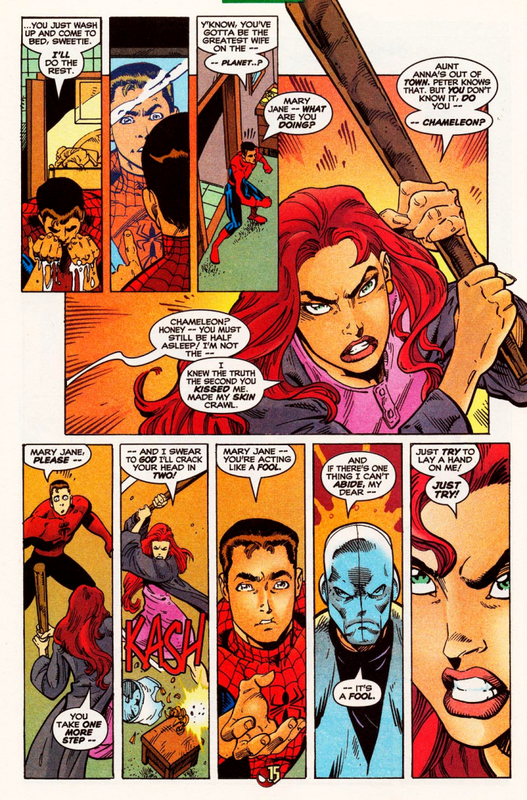 5. .MJ can sense Peter's spirit
It's fair to say that one of the most aggravating aspects about the Superior Spider-Man was how the people who were closest to Peter, even though they noticed he was acting like an arrogant and temperamental jerk, they never really questioned why he was acting like this.

One of them was also the one person who, by all accounts, should know Peter better than anyone else in his entire supporting cast--Mary Jane Watson. Yet how could this woman who has known Peter's secret identity since the beginning, has been one of his long-time love interests to point where they, before the "One More Day" retcon, were husband and wife, and has been able to see through villains disguising themselves as Peter in the past, including Kraven the Hunter and the Chameleon, not even suspect that “Peter” might not actually be Peter? Well, as number five on our countdown states, it's apparently because MJ can sense the presence of Ghost Peter.

And now you readers are probably going, “Um...what?!” 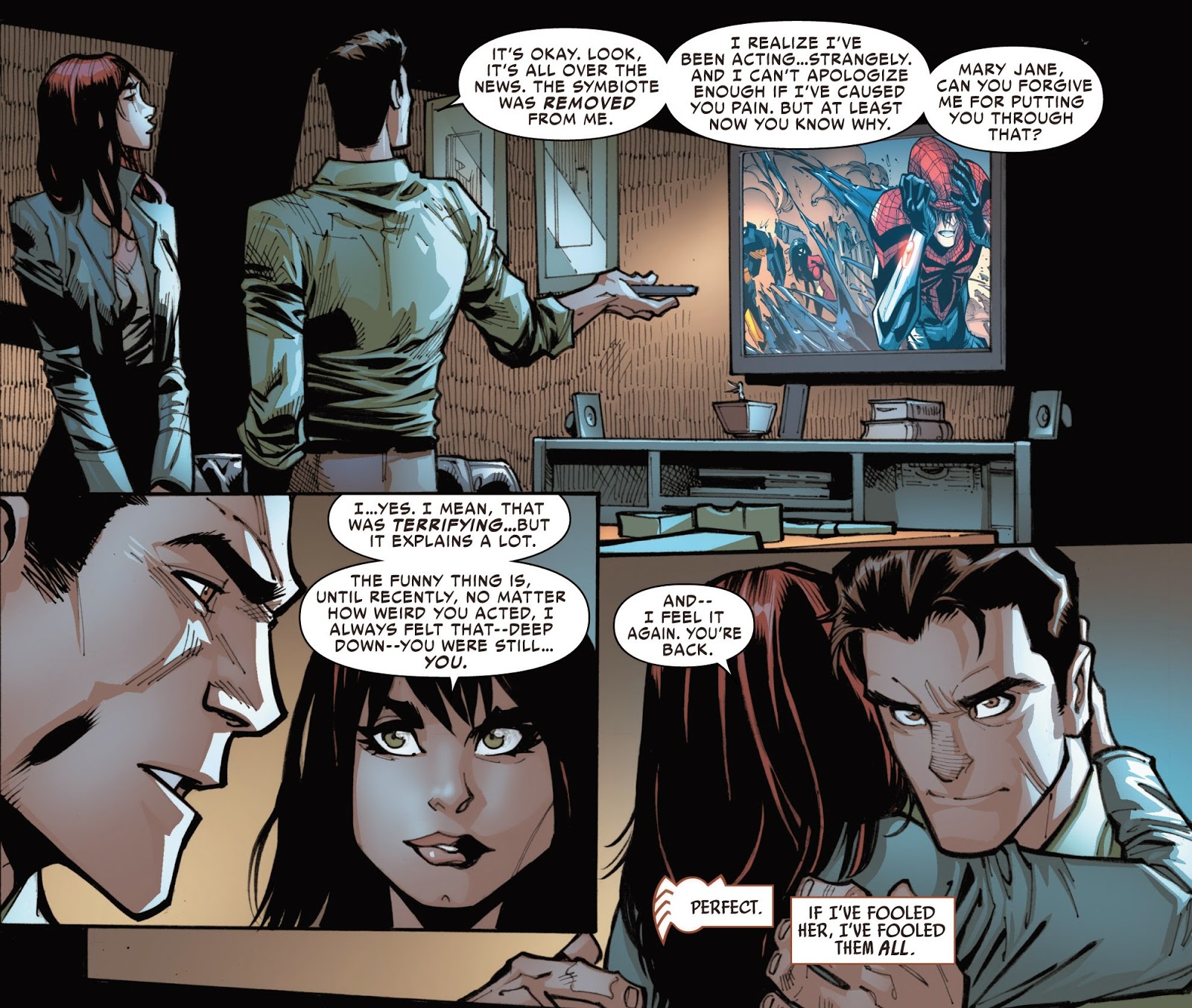 So yes, even though she cannot see, hear, or even know that Ghost Peter exists, MJ is still intuitively aware of his presence. Why? Because, as explicitly stated in Superior Spider-Man #2, she and Peter are soul-mates. And it's because she can feel Ghost Peter is also the reason she hasn't been able to see through Doc Ock's ruse. Who knew that all those years being in a relationship with Peter would have given MJ a “Parker-sense”?