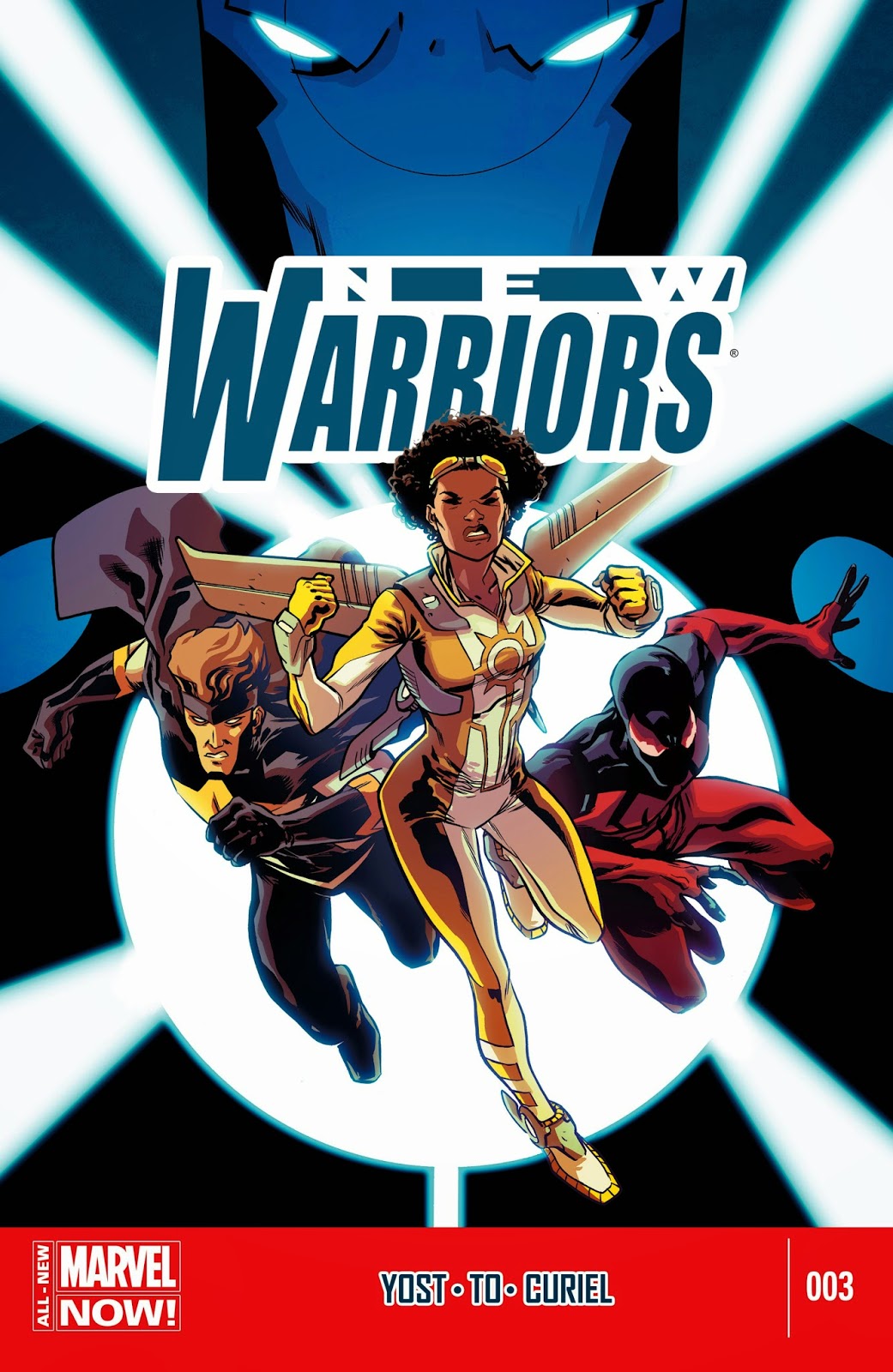 I think it's fair to say that, thus far, the latest incarnation of the New Warriors has gotten off to a rather lackluster start.  This in spite of the fact that we have a story dealing with a world-wide global threat in which various heroes, including our resident Spider-Man clone, Kaine, aka the Scarlet Spider, are forced to confront.  Not to mention, it also involves one Herbert Edgar Wyndham, better known as the High Evolutionary, a long-time mad-scientist with cosmic-level intelligence who has been both friend and foe to the likes of the Avengers, the X-Men, Fantastic Four, and even Spider-Man.  So will things start picking up at last now that we are about to learn to just what the full scope of this new "Evolutionary War" entails? Well...from the looks of things, it still might be awhile. 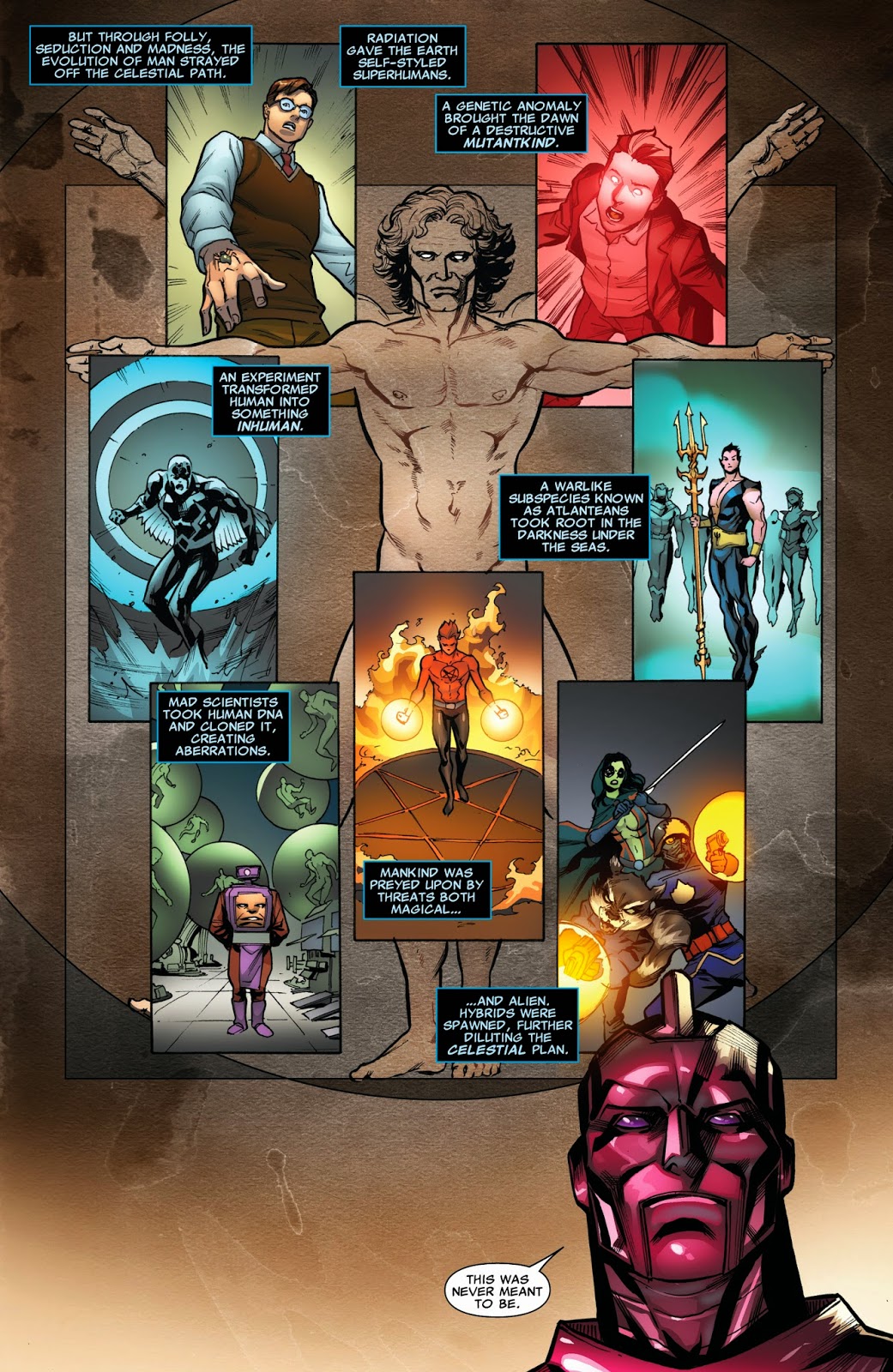 THE STORY
In Mount Wundagore, The High Evolutionary relates to Sam Alexander, aka Nova, about how prehistoric Earth was visited by the Celestials who, for reasons unknown, divided man into three species: Humans, Eternals, and Deviants. The Eternals and Deviants warred with each other while humans continued to evolve; however, radiation, genetic anomalies, experimentation, magic, and alien cross-breeding have resulted in the creation of various super-beings—including mutants, Inhumans, and Atlantians—which have strayed from the Celestials original intentions. The High Evolutionary admits that he himself used to be “part of the problem” when he created the New Men, but now that the Celestials are returning, he believes that mankind must be made “pure” again. Sam says that the High Evolutionary is essentially a “Space Nazi,” and the High Evolutionary retorts that he waged this “Evolutionary War” before by creating a machine that would “better mankind.” Now, he realizes that humanity was not the problem but “everything else was.” Thus, the High Evolutionary has re-calibrated his machine to end the “corrupted lines” within mankind's evolution, and that Nova's helmet will make the process more precise.

Three of the Evolutionaires appear with the unconscious Kaine, Aracely, and Water Snake, explaining that they couldn't obtain any  genetic samples from Lemuira as the underwater city was attacked by Deviants, and that Water Snake went to Kaine and Aracely for help. The High Evolutionary says that since Aracely “reeks of magic” and that Kaine is a clone, he tells the Evolutionaries to imprison the “samples.”

In New York, the police, having come to investigate the commotion in the subway from the last two issues, have their guns drawn on Justice, Speeball, Sun Girl, and the Inhuman named Mark. The heroes try to explain what happened, but when one of the cops recognizes Mark is an Inhuman, they start shooting. Justice, however, is able to shield Mark, himself, and Speeball and with a telekinetic bubble and, along with Sun Girl, they fly off and escape.

Afterward, Justice tries to give Mark some encouragement, but Mark is clearly upset. Sun Girl says points out that Mark saved her life, that he absorbed the energy blasts from the Evolutionaries, and that he should embrace whatever has happened to him. Justice tells her she has no idea what she's talking about since she take off her gear any times she wants but Mark cannot stop being an Inhuman. Sun Girl retorts that Mark should be proud of who he is, and then makes as if she is leaving, and Justice and Speedball then tell Mark he can get help from the Royal Family of Inhumans. Mark states how he's heard rumors of Inhumans being rounded up and killed, and just as he says this, Sun Girl shoots him. 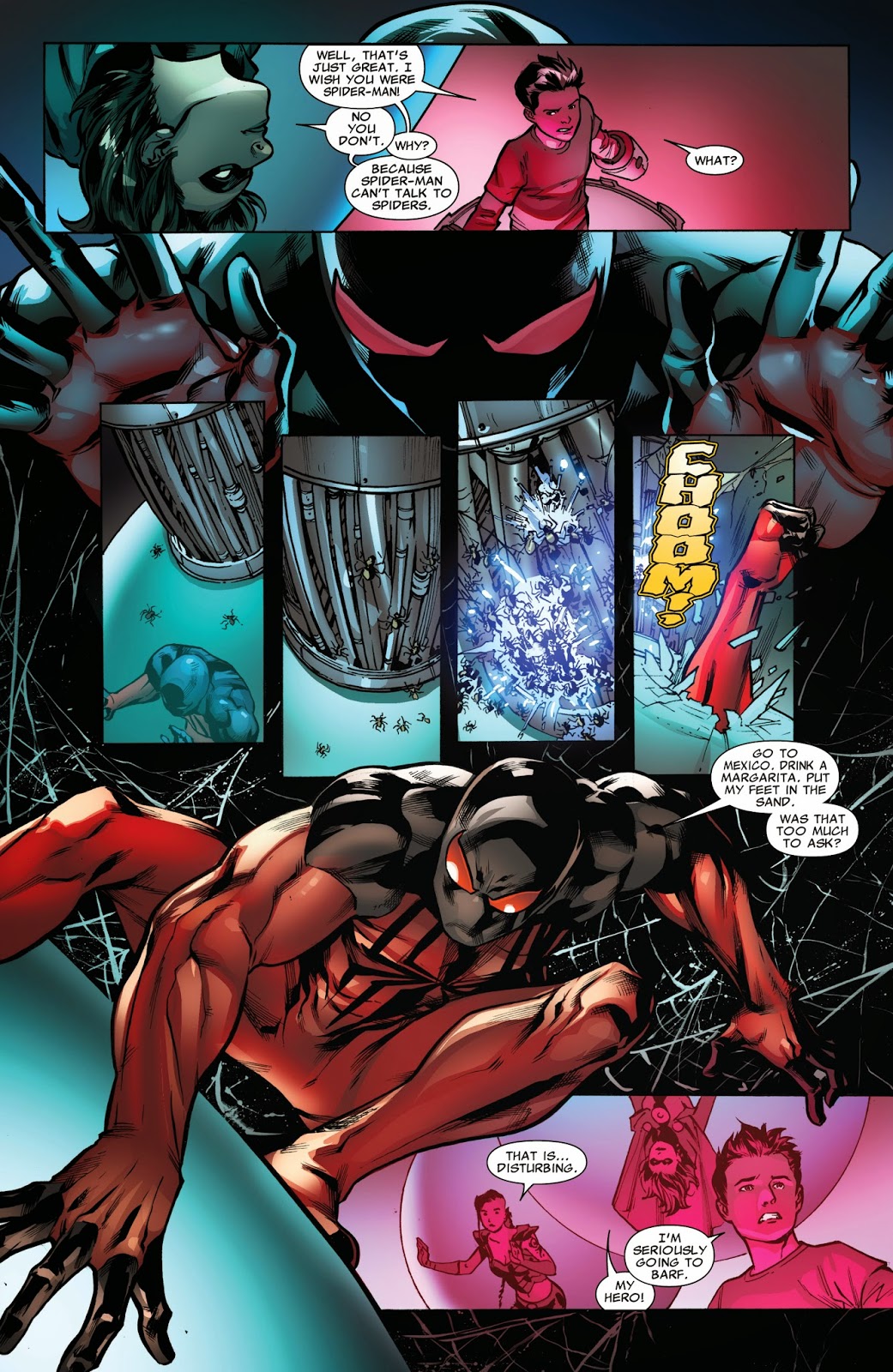 We return to Mount Wundagore, where Kaine, Aracely, and Water Snake regain consciousness and find themselves imprisoned inside bubbles over Sam's containment field. Sam assumes that Kaine is Spider-Man in a different costume, which really gets on Kaine's nerves, while Aracely, via her ability to read minds, introduces everyone to each other. Sam tells them about the High Evolutionary and that he needs his helmet back to make a distress call. When burning through the bubble doesn't work, Kaine uses his ability to talk to spiders to short-circuit the wire coupling of the containment bubble, allowing Kaine to smash his way free.

Back in New York, Justice has imprisoned Sun Girl in a telekinetic force bubble for her shooting Mark, but they see that not only is Mark unharmed, he says he's feeling great. Sun Girl states that she had to show the others that Mark has the ability to eat energy, and that his power is vital to stop the Evolutionaires. Justice, however, says that none of them are going after them, that the Avengers are better equipped to handle a threat this serious. Sun Girl points out that the Avengers are not here, and asks Justice if he's an Avenger. When Speedball says that Justice is a Warrior, Sun Girl says that Justice needs to act like one. After giving it some thought, Justice says they have to find Nova. 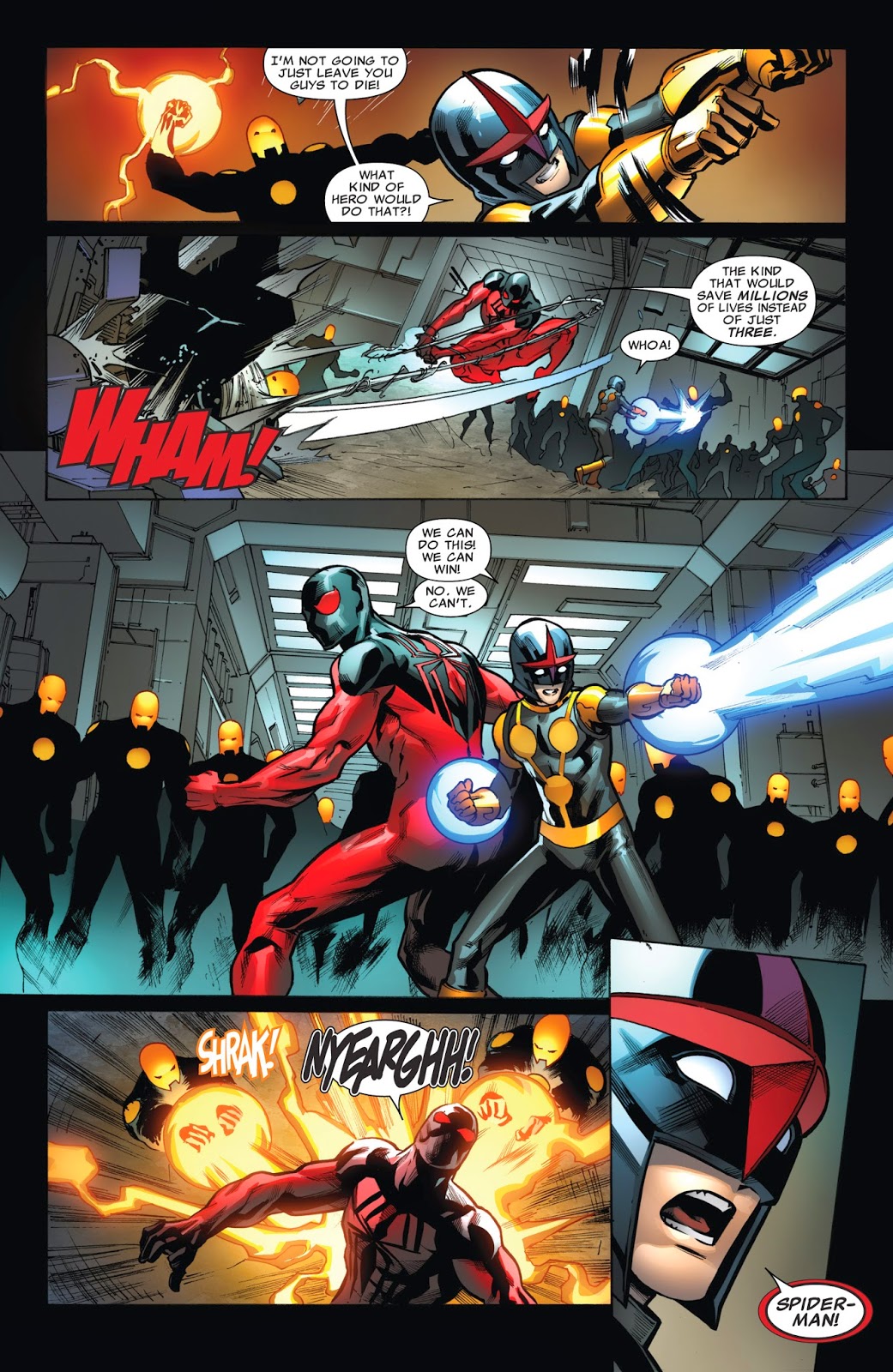 At Mount Wundigore, Kaine returns Sam's Nova helmet to him, telling him to call for help. Aracely senses they're in trouble, and soon swarms of Evolutionaires are crawling over the walls and ceilings towards them. Kaine tells Nova to get help, while he, Aracely, and Water Snake attack the Evolutionaires. However, the fight ends up going badly, as Aracely and Water Snake are both taken down. Kaine is about to be next when Nova returns. When Kaine tells him he was supposed to go for help, Nova says that he changed his mind and wasn't going to leave the others to die. Kaine then gets blasted by an energy beam from one of the Evolutionaires, while Nova is forced to fight off the rest until he overrun. To be continued...

THOUGHTS
So here we have two groups consisting of four superheroes each that are supposed to be members of the same team even though that team still hasn't officially formed. Based on the character interactions and dynamics presented in this issue, there's definitely one group of heroes who prefer vastly over the other. Given my fondness for the earlier Scarlet Spider series and this being a Spider-Man related website, you probably guess my preference.

In all seriousness, however, the interactions between Kaine, Aracely, and Nova were the clear highlights of this issue (I'd include Water Snake except she didn't actually say a lot in this comic) and one could almost sense that Yost had much more enjoyment in writing these scenes. Yes, the Sam Alexander Nova initially comes across just as annoying here as he does in the Ultimate Spider-Man cartoon series, but once he meets Spidey's clone and the teenage Aztec demigod, the chemistry between the three is just gold, and I loved the running gag that Nova keeps mistaking Kaine for Spider-Man the entire time. Even Marcus To artwork, which was quite good throughout this comic, had much more energy and exuberance, which is appropriate given the climatic fight scene. 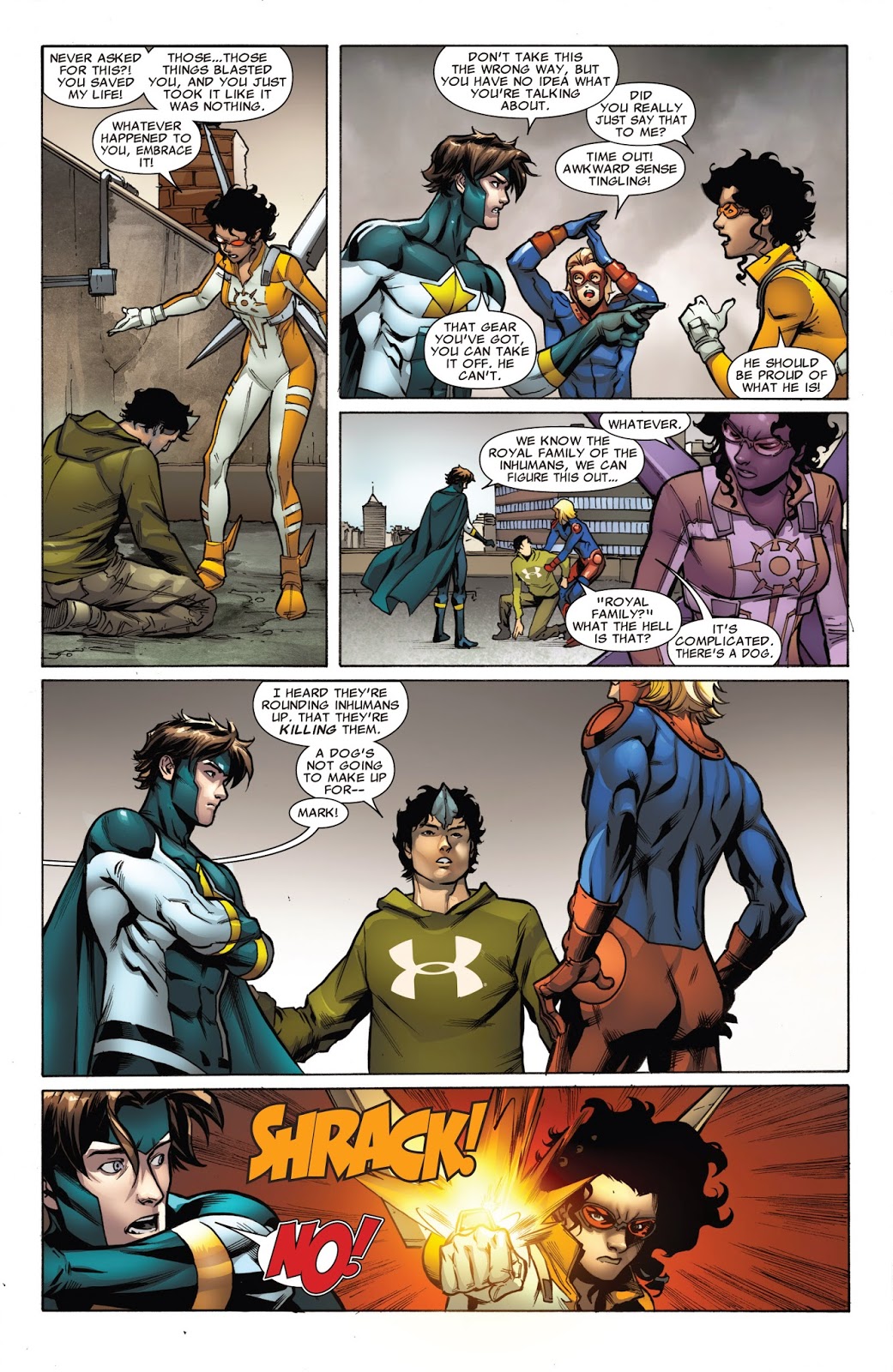 Unfortunately, the other group consisting of Justice, Speedball, Sun Girl, and Mark not only isn't nearly as interesting, I found all of these characters came across rather unsympathetic and insufferable in their own unique ways. In Yost's attempt to make her seem more tough and confident, Sun Girl instead comes as arrogant and argumentative for the mere sake of being argumentative. Part of trying to elevate her credibility also comes at the cost of Justice, who while he has been shown as reluctant to reform the New Warriors, inexplicably in this issue wants to delegate handling the threat of the Evolutionaires off to the Avengers even though he knows full-well that the Avengers are not available and was previously gung-ho about responding to the attack in the subway just last issue. And while this is less of Yost's fault and more to do with Marvel's overall creative decisions, I cannot stand the idea of casting the Inhumans as a kind of “X-Men-lite” who are, just like the mutants of the Marvel Universe, are also hated and feared by the humans they protect. Plus, how do the cops even know Mark is even an Inhuman and not a mutant simply by looking at the horn on his head? It only goes to show that making the Inhuman's current status almost identical to the plight faced by mutants makes them all but lose what little distinction they used to have.

Overall, this issue isn't terrible, but it does comes across as being rather generic and bland. Which is odd because, given how the story itself involves systematic attacks on nearly every super-powered being on Earth and the oncoming apocalyptic threat of cosmic beings, one would think this would be far more epic in scope. As it stand now, however, it makes me long for a Scarlet Spider and His Amazing Friends series.
Read More
Newer Posts Older Posts Home