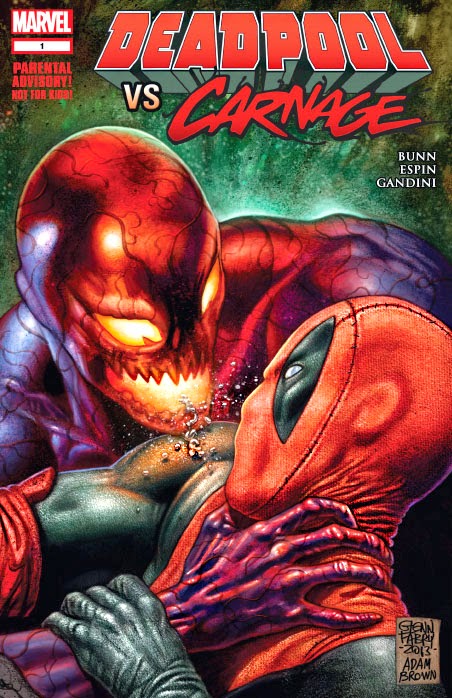 Just recently, acclaimed serial killer Cletus Kasady has sprung himself out of jail( for the umpteenth time) Meanwhile, the would be hero know as Deadpool is lurking somewhere beyond the 4th wall of comics.

And here we go. I love a good versus match up, and this is one of my absolute favorite aspects of comic books. Toss 2 guys into a location and let them duke it out, and see who comes out on top. It’s a scenario where seemingly anything can happen and often does.

Admittedly even though I have been following Carnage quite religiously, I am usually not 1 to follow the exploits of Deadpool, but this just so happens to grab my attention.

Summary: Carnage is back to enjoying the simpler things in life: terrorizing the general public, while our resident Merc. with the mouth: good Ol’ Deadpool, is catching some waves: airwaves that is, as he surfs the tv channels in his not so comely apartment.

A newscast informs him of the grievous murders of the symbiote and law enforcement’s inability to reckon with him. DP pretty much ignores this, continuing to flip the channels until super obvious messages overwhelm him with purpose.

He feels a special tingly urge to seek out and destroy the evil creature known as Carnage. So he sets out on his mini adventure following prophetic clues that coincidentally lead him to Tulsa Oklahoma aka redneck paradise.

Cletus has taken to admiring the small town enjoying the freedom, that is until a missile comes flying into his home blowing everything to smithereens.
Nearby DP comments on his handy work and sets out to finish the job. Carnage, in full symbiote form lashes out at Mr. Wade Wilson, disarming the sword from his hand.

Wade resorts to quick-shotting the maniac with his trusty handgun, but Cletus returns fire with his own spiny material. DP absorbs the spiked shrapnel and takes a fall. Carnage mounts his victim and gives him a brief speech allowing DP to conveniently shove a grenade down the red man’s throat. The consequence of the blast not only removed Deady’s hand, but puts Carnage flat out and down. However Carnage laments that basically it ain’t over till the fat lady sings, and sure enough back up has arrived in female form.

A deafening blast causes DP to drop to his knees in pain. The awful shrieking sound has melted his face. Shriek, the queen of scream stands over DP with her main man. 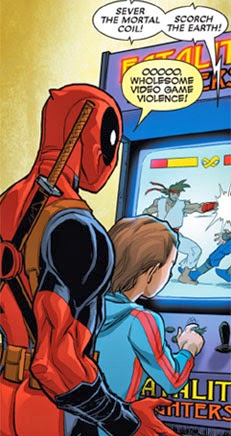 Not surprisingly Deadpool takes the lead role and the tone of the book fittingly becomes sarcasta-playful. Sure, I can dig that. I love how Deadpool stories are chock full of pop culture references, such as the Street Fighter/ Mortal Kombat game being played in the grocery store.

Did you happen to notice the Wasp poster on Wade’s wall? I sure did. It’s stuff like that which is icing on the cake, that I enjoy as well as the actual conflict.

The fight between Wade and Cletus is satisfyingly brutal and full of those 1 liners that add extra insult to injury. Also what issue 1 mini series would be complete without a cameo on the final page? This one does not fail to deliver exactly that with the nostalgic return of Shriek. I’m all for female villains in a Spidey story, but let’s face it, if we were ever going to see Shriek again it was probably going to be in a Carnage story anyhow.

Last time we saw this vixen was in the 2011 Zeb Wells written mini:  Carnage where she was pretty much doing the same thing.  Not putting significance aside, that series also saw the debut of yet another symbiote and female character Scorn. I’m wondering if Scorn will make an appearance in this as well as become the foil to Shriek, Well here’s hoping Cullen Bunn won’t mind using a Zeb Wells creation.

Back to the main story at hand, I liked how both our main characters were written with a bit of tongue in cheek humor, it shows these two loonies were custom made to tear each other wide open. The writing as another layer to the seemingly  simple conflict in that DP is trying to prove that he is a higher degree of crazy than Carnage, is ,was, and ever will be. 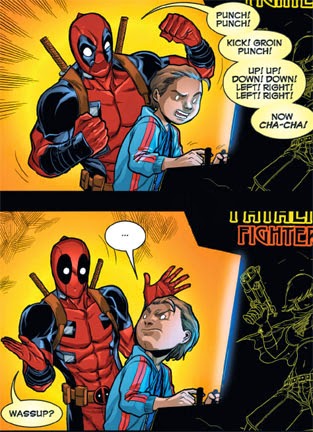 I also enjoyed the art quite a bit, noticing some subtle hidden gems in the background such as a dude with a Guile haircut standing next to a man that looks very similar to Zangief. Is it ironic that a few pages later we see the “Fatality Fighter” Arcade? Me thinks it is.

Futhermore the art is rather pleasant and interestingly colorful for such a violent subject matter; almost a complete 180 from Clayton Crain’s rendering.

Fun Fact: When Cullen Bunn wrote Deadpool kills the Marvel Universe, in which Deadpool took out the who’s who of marvel character’s, he never crossed paths with Carnage even though he brought down his predecessor: Venom, using Church bells. Will Wade be able to replicate this?

This story is no doubt just beginning to sizzle and showcases the lengths these two demented nut jobs will have to go to just to dispose of each other. Hold onto your butts, this is going to be a wild ride.