This is it, the issue we have all been waiting for! This issue begins with the two Spider-Men ( Spider-Man 2099, and the Superior Spider-Man), fighting for their lives against the Spider Slayers, now controlled by Norman Osborn.

The two Spider-Men are not doing so well, when Osborn, through the Spider Slayers, show to Spider-Ock a picture of Ana Maria, captured. Osborn allows Spider-Ock to leave the battle to give him a chance to save Ana Maria if he abandons Spider-Man 2099. 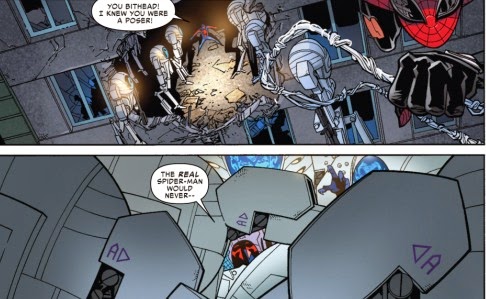 As Spider-Ock swings through his burning city, being overrun by goblins. Down on the streets, the Avengers, Cardiac, Wraith and the police are all busy fighting crime, goblins and spider slayers!

Over at City Hall, Mayor Jameson tries to shift the blame to Alchemax for the faulty Spider-Slayers that were released on the streets. Liz Allan however, director of Alchemax has proof- signed papers that Mayor Jameson wanted the Spider Slayers on the streets, against her will.

We are also clued in on a huge hint to the identity of the Green Goblin, whom up to this point we are all led to believe is Norman Osborn. Down on the floor in Liz Allan's office is a Green Goblin mask, which she picks up and hides quickly as her son comes into the office. 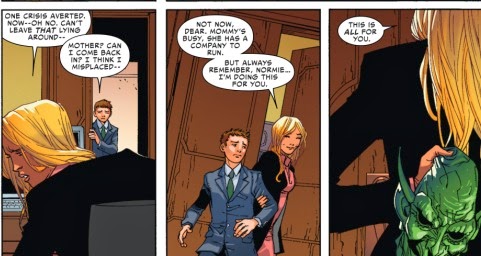 Meanwhile, Spider-Ock is stopped in mid air by Menace, who taunts him about the location of Ana Maria. Menace leads Spider-Man to an underground subway where a little girl is about to be run over by a train. The girl however is Amy Chen - the girl with cancer whom he had saved back in Superior Spider-Man # 8.
For a moment Spider-Man hesitates for fear that if he fails to save Amy Chen and dies in the process, there will be no one to save Ana Maria. 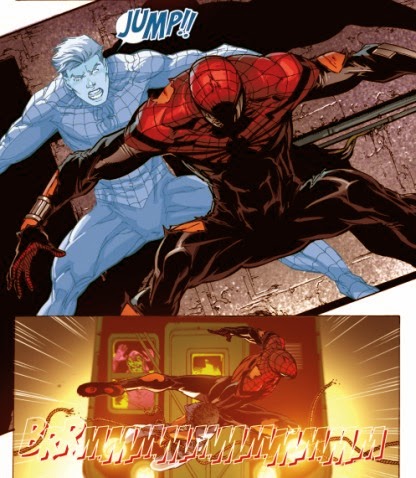 Just then however, a voice prompts him to jump. Spider-Ock jumps and saves the girl. We learn that ghost Amazing Spider-Man # 700, the little fragment of Peter's memory took the chance to regain all his life's memories, restoring him to his full self!
Peter Parker, who was busy living out Dr Ock's life had reached the point in his life where Ock had Peter Parkers memories implanted into his brain. While, Ock had rejected as much of Peter's memories as he could back then in

Ghost Peter, making himself known to Spider-Ock, challenges Ock to a rematch! Ock however, does not want a rematch and has come to accept that Peter Parker is a superior Spider-Man to himself. He voluntarily goes to Parker Industries where he goes into his private lab, all to the surprise of Ghost Peter. He then removes himself and his memories from Peter's body 'forever.,' requesting that Peter save Ana Maria.

The issue ends with Peter Parker reaching for a closet in the lab that where his old suit is stored ( not sure how he knew that), ready to take out the Goblin King. 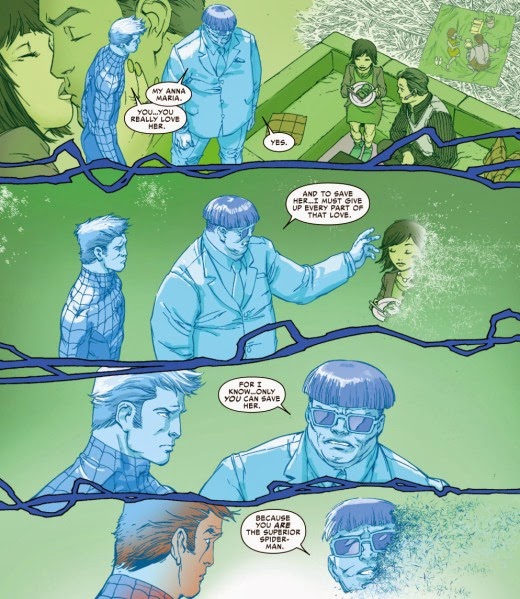 Well, this issue was extremely rushed. The only thing that saved it is that Peter Parker came back to life, which alone carries plenty of points.

I thought, there would be a little more conflict before Doc Ock decides to kill himself permanently. Having said that however, it is unlikely at all that he is truly dead! When Ock removed himself from Peter's body, a single tear came out, which may, or may not, be the essence of Otto Octavius. Also I was hoping that out of all the mess he has left Peter with to clean up, he would at least come clean to Ana Maria, before removing himself from Peter's body and leaving the real Peter Parker to explain himself.


So, just to clarity sake, I'm going to list all the problems the Peter Parker is going to face as a result of Ock.


As for the positive things Ock did for Peter:


Well, good luck Pete! Can't wait for the next issues.