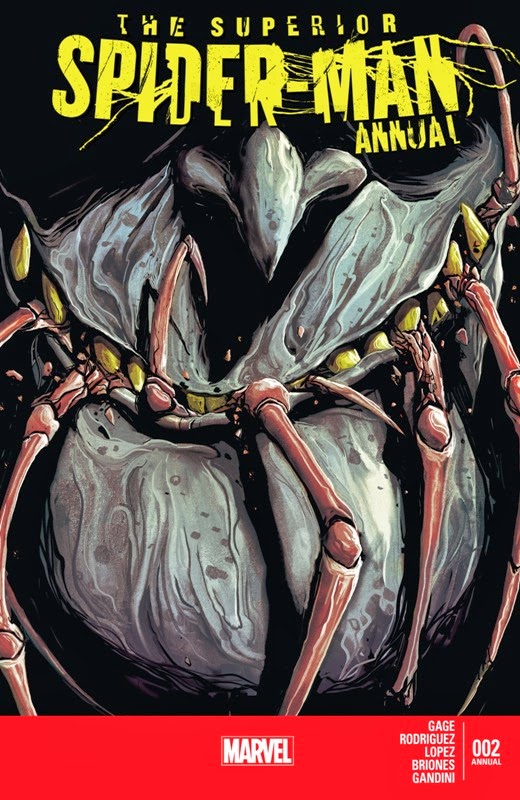 Here we are with the late review of the second Superior Spider-Man annual in less than a year! ( Quite confusing) .This issue is divided into two different stories that are actually intertwined, taking place one after the other, which is quite unusual for annuals in my opinion.

This whole story focuses on Ben Urich, uncle to Phil Urich, aka one of the Hobgoblins, who now goes by the name Goblin Knight.

Ben, wonders how he could have let his focus on his job as a good reporter take so much time from him to the point that he had noticed his nephew becoming the monster he now is. On the television, we see Norah Winters, also a reporter who was dating Phil for a while, being interviewed by the press. Norah insists that Phil was a loser, also admitting that she too was a loser for dating him. 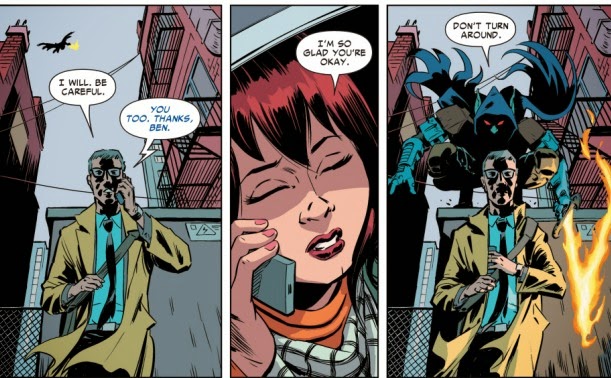 As Ben leaves the office, he gets a call from Mary Jane, warning him to leave the city as the Goblin is going after anyone who was close to Peter Parker. She also asks him to tell their other friends from the Daily Bugle to leave the city. As he gets off the phone, a goblin figure sneaks up behind him, warning him not to turn around. The voice tells Ben that he is safe, but warns him to stay indoors. Ben goes to the Bugle, and tells Robbie that he should leave town, as advised by MJ.

Ben then goes to Parker Industries, trying to enlist the help of Peter Parker to find a goblin cure for his nephew. Sajani shows Ben what progress they have been working on with Carlie, who is now Monster.

Sajani gives Ben a prototype serum that might work, but has not yet been tested on Carlie for fear that she may not survive. Ben gladly takes it as he is out of options with his nephew. As he leaves, Sajani reminds Ben that the spiderbots are unable to detect goblins, but if he needs help he can call Spider-Man with the help of the bots.

We next see the Goblin Knight, storming into Norah's apartment, furious that she had called hi a loser. He is shocked to see his uncle Ben waiting for him there. Apparently Ben had put the word out that Norah was at her apartment. Ben tries to talk to his nephew, almost succeeding in injecting him with the formula. Unfortunately, some mini goblin thugs come in to inform Phil that they found a spy - Robbie!

This infuriates Phil, causing him to ignore his uncle's advice. The Goblin Knight then slashes Robbie's chest.
At this Phil, screams out the window for Spider-Man's help. His plea for help is picked up by the spiderbots, and very soon, Spider-Man comes swinging through to kick Phil's @$$. Eventually however, Spider-Man has to make a decision to either save Robbie by bringing him to the hospital, or to capture Phil Urich. Spider-Man decides to save Robbie. The issue ends with Ben Urich, accepting that his nephew is no longer who he used to be and can no longer be saved.

This short story revolves around Wraith, who was last knocked out by Monster aka Carlie, and kept under surveillance by Peter-Ock's robot in Superior Spider-Man # 29

Wraith wakes up, takes out the Robot and searches Parker Industries for Monster. Meanwhile, Carlie is finding it more and more difficult to control herself and insists that Sajani give her the prototype. Sajani mentions that the test on the rat caused the rat to go crazy. This made Monster laugh, just as Wraith walked in. Still unable to see Monster due to the glitch in her eye piece using the same tech as Spider-Man's spiderbots, Wraith follows Monster's voice in order to fight her, but finds it extremely difficult.

Monster is finally subdued when Sajani jabs her with the prototype serum. Wraith then witnesses the 'invisible' Monster changing into Carlie. Sajani soon explains to Wraith why she was unable to see the goblins.

Wraith then removes her lenses and leaves to beat some goblins. She also states that she wants to talk to Carlie when she wakes up, to which Sajani comments that she may not wake up as the serum was experimental! Fortunately for Wraith's curiosity, Carlie cleared it up that it was not Peter who had kidnapped her, but the goblins instead before she passed out.

Neither one of these stories were particularly necessary for the Goblin Nation story line. The first story was mostly pointless, ending only with Ben Urich finally accepting that his nephew is unchangeable.

The second story, though shorter had a little more depth with us finding out that Carlie had physically reverted back to her human form. Wraith also finally realized why she was unable to see any goblins.

It is possible that a follow up story on Sajani, figuring out some of Peter Parker's secrets could develop from this story. All the focus on Peter Parker and Spider-Man, must surely get Sajani thinking a little by now.

This issue also creates the perfect set up to kill Carlie off, as a number of people were speculating. However, I strongly doubt Carlie will be unable to recover from this situation, and this will quite likely not be the last we see of Detective Carlier Cooper.